The price of skulls. 65 years ago the trial of Nazi doctors ended in Nuremberg 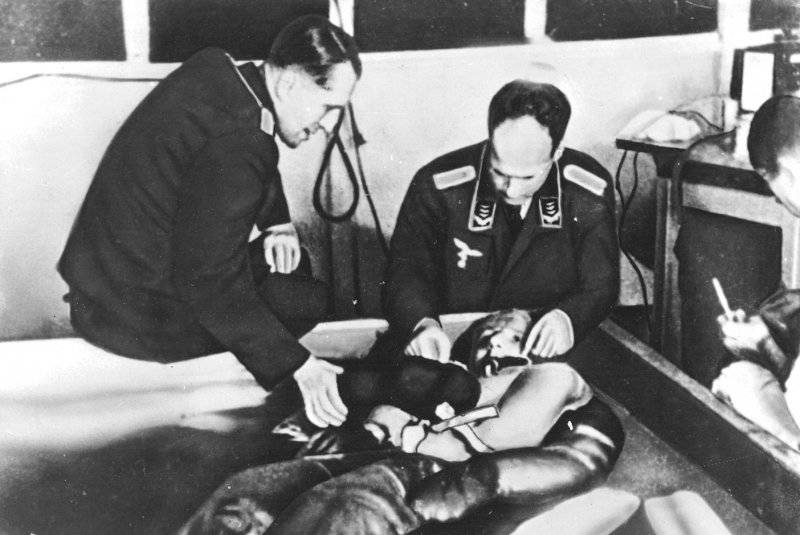 May 1945 of the year. North Westphalia occupied by Americans. At night, at the bridge, soldiers hold a motorcade — three “jeep” and five armored personnel carriers. They explain: on the other side of the river there are German “panthers”. The bits of some SS tank regiment suddenly jumped out to the bridge, thought to cross, and the bridge was already ours. We tell them: Germany capitulated, the war is over, give up, why sacrifice ?! They confer, but they do not seem to believe, they are preparing for a breakthrough ...

Meeting on the bridge

The American column is also for a reason. This is being taken to the investigation of one of the pillars of the Reich, the head of the "Labor Front" of Nazi Germany, Robert Ley. Ley suggests Colonel Harrison, the person in charge of delivery: let me go to the tankers of the truce and say that you are missing them. After all, the guys have nothing to lose, they will hit - they will sweep away everyone. I will not run away, my family is with you. And then let roll, where they want. Far from going. Harrison agrees.
Among the tankers - tired, dirty, angry - Lei suddenly sees an unexpected character. Dr. August Hirt, Sturmbannführer, Head of the Anatomical Institute of the SS, Head of Medical Programs of the Ahnenerbe Society. The creator of the famous collection of skulls, demonstrating the differences and advantages of some races over others. Where are you from here? Hirt looks at Leia with crazy eyes: I save the collection! Pulls to one of the "Panthers", pulls out a skull from the boxes, puts it under his breath: look, priceless artifacts! Alas, some of the "exhibits" are fresh, we did not have time to go through the full processing, they smell sickly. Hirt does not notice, but the crew looks at him with hatred: everything in the car smelled, we went with open hatches. Lei asks the commander: why do you need it? He shrugs: the psycho-professor insists that the skulls are expensive, and I ordered them to be loaded just in case. Suddenly, tomorrow who wants to buy!

About skipping self-propelled guns manage to agree. In the darkness of the night they roar by with a roar. From one for an instant, the foul spirit of hirtovy "exhibits" mixed with the smell of gasoline comes and Leia begins to vomit uncontrollably. All life is in vain! Germany is in ruins, millions of lives are ruined, the whole world curses us - but for what was everything? To prove that one skull is more correct than the other?

The first of the following

We retold one of the strongest scenes in the novel by the writer (and the regular author “AN”) Elena Syanova “To each his own”. After a little over two years, the colleagues of the ominous Professor Hirt were to hear the sentences at the Nuremberg "Doctor Process." It ended 65 years ago - 20 August 1947.

In general, the “trial of doctors” is the first of a series of processes that followed the trial of the main Nazi criminals. Then there were the “trial of the judges” (Nazi legal officials), the trial of the “Krupp case”, the trial of the command of the Wehrmacht — a whole series. But we started with the doctors. Why? Previously collected evidence base? Or is the situation too obvious? People of the most humane profession consciously rejected humanism in order to solve their problems.

Hirt was not in the dock. I managed to escape. And who was? The human 23 — experimenter doctors who worked in concentration camps and high-ranking medical officials (such as Karl Brandt, Hitler’s personal doctor, and the Reich Minister of Health — was tried for deploying the T-4 program — this is compulsory euthanasia of the mentally ill).

The defendants were accused of war crimes and crimes against humanity, expressed in the form of "medical crimes". Those were recognized: the murder of prisoners in order to replenish the anatomical collection of A. Hirt (officially - “the meeting of the skeletons of the University in Strasbourg”); development and implementation of programs of forced euthanasia and sterilization (the Reich did not need any mentally ill and racially inferior, they should be killed or deprived of the opportunity to multiply); a series of inhuman forced experiments carried out with applied goals.

What was meant? Well, for example, research commissioned by the Luftwaffe. Pilot shot down somewhere over the polar sea. The plane falls from a great height. Skydiving. How will the body react to the pressure drop? How much can the body withstand in icy water? What should be the design of a life jacket? What will the pilot drink - because the water is around the sea? After the rescue - what procedures are needed for a supercooled body to quickly restore normal temperature? ..

The questions themselves were quite sensible. Doctors from many countries searched for (and are looking for) answers to them. It’s just that in Nazi Germany they were approached in a Nazi way to solve any problems. And here there is a direct logical connection between the search for answers to specific medical questions and the cutting off of heads in the name of the theories of Professor Hirt.

Problems responding to an abrupt drop in pressure? Well ... In Dachau, a pressure chamber is equipped, in which the conditions of such a differential are simulated. Experimental - prisoners of a concentration camp are being pushed into it. Of the 200 people, about 70 died.

Stay in ice water? Put the experimental in a bath with floating ice. Or naked in the snow. Then we check that it will rather return the frozen one (if still breathing) to life. Hot bath? Otpaivanie herbal infusions? Living warmly laid next to a woman (also from prisoners)? What to drink pilot floating in sea water? We have two options for desalination drugs. We take the control group (44 prisoners of Buchenwald), keep it without water, but drink desalinated products. Let's see who will survive.

The same non-wise methods - when testing drugs: for tuberculosis, typhus, hepatitis. And also when searching for protection from combat poisonous gases - phosgene and mustard. Take the prisoners. We infect them. Or hate - when it came to gases. (When varieties of streptocide were tested, gangrene was caused.) We look at who survived. And who did not survive ... Well, why clutter up with thoughts of all sorts of "racially inferior" and enemies of the Reich!
Note: it was after the “process of doctors” that the “Nuremberg Code” was adopted - a set of international rules governing the procedure for conducting medical experiments. Such a lesson for the future. It assumes strict voluntariness on the part of the subjects. Full information about their health, interruption of tests in case of deterioration. Insurance ... One of the most important documents of medical ethics.

Writer Elena SYANOVA - for "AN":
- For me, August Hirt is a type of scientist-fanatic, who cares only for his ideas - and even if the grass does not grow there! In Nazi Germany, he ideally came to court.

Hirt started off with a worthy cause: the soldier of the First World War, he was looking for an antidote for mustard gas. Conducted experiments on himself, got to the hospital. And with mustard in the First World War Hitler was poisoned. They reported to him: the doctor - yesterday's front-line soldier almost died, seeking salvation from the gas with which you, the Führer, are so bitterly familiar. After this career Hirt was secured. He continued experiments, but he experimented on prisoners of concentration camps. People were dying, blind ...

Hirt created his “anatomical collection” on the instructions of Himmler (however, the interest was mutual). "Material" also came from concentration camps. On the "process of doctors" understood the fact of the murder in order to replenish the collection of 88 prisoners of Dachau. Chiefs of a number of camps, such as Bergen-Belsen, also collaborated with Hirt. In addition, the materials of Nuremberg featured a document signed by Hirt for the Eastern Front: in our collection there is a shortage of skulls of the “Jewish-Bolshevik Commissars,” here is how to separate them from the body. Hirt himself explained that in addition to the anthropological-racial goals of the skull, he was required in connection with studies of all kinds of pathologies.

Doctors were judged by the Americans. There were witnesses, prosecutors, lawyers, the defendants were given the final word.
Seven people were sentenced to hang. Five - to life imprisonment. Four - for long periods. Seven were acquitted - secondary participants in the events and those whose experiments did not cause victims.

Life to the end no one left. Sentenced to terms out in a couple of years. People recognized as Nazi criminals in West Germany then successfully worked as doctors, held their own clinics, someone received a medical award, someone continued research in the US Air Force.
But they somehow answered. And the conversation will be incomplete if we do not remember today those who left legal retribution. Also, because the iconic characters.

Dr. Josef Mengele, the "angel of death" from Auschwitz ...

Dr. Sigmund Rascher, who began experiments with hypothermia (hypothermia). The colorful figure is a staunch Nazi who even sent his own father to a concentration camp. But this is not famous. Rasher was married to Himmler's old friend, a lady much older than herself. They had three children. It was believed that Dr. Rasher was experimenting in the field of gynecology, and that was the result - so important for improving the demographic situation in the Reich! And then there was a scandal: at the Munich railway station, someone tried to steal the baby, and the police detained the criminal. It turned out - Frau Rusher. It turned out that the woman had moved on the topic of her infertility. Therefore, the husband in Buchenwald simply took away the children whom the women who had been brought to the camp gave birth (at one time he had such an opportunity), and the Spouses Ruschers gave them away as their own. For the “deception of the Reich,” doctors were sent to Dachau. Killed by guards the day before the Americans entered the camp.

Finally, Dr. August Hirt, with whom we began the story. They searched for this until the end of 1950-x, then stopped it, having come to the conclusion that 1945-10 shot himself in June.

Elena Syanova - for “AN”: “Do I believe in it? I believe. Hirt was a fanatic. Not only a Nazi fanatic, but also a fanatic of what he did. Such a person could not sit quietly anywhere in Latin America. He needs the scope and favorite bloody affair. "