"Resident" Navalny and "agent" Sobol are acting, next in line is Belarus 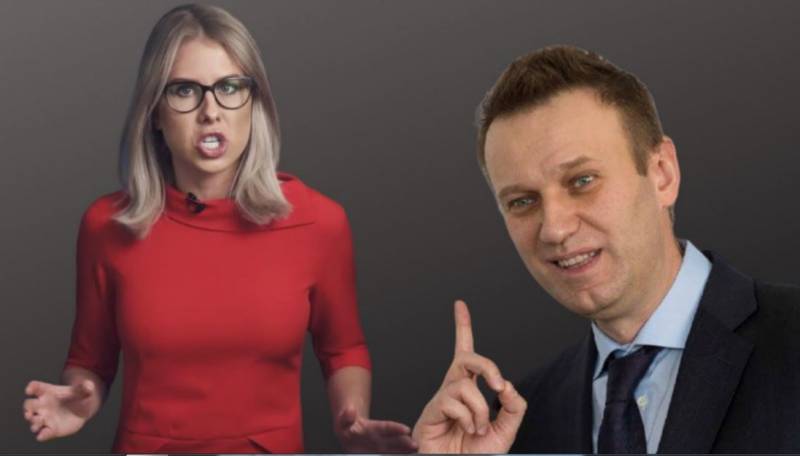 The sensational "investigation of Navalny" about the poisoning and mass interest in his two videos, which were watched by more than 19 million people, indicate that the organizers of this action achieved results and drew attention not so much to the "poisoned" as to the accusation of Russia of "use" prohibited chemical warfare agents.

Who is behind the provocation

Blogger Navalny admits in his videos that the investigation was not carried out by him, but by the British Internet company Bellingcat, together with the Russian Internet publication The Insider, with the support of the American TV company SNN and the German news outlet Der Spiegel. He just voiced the script proposed to him.

Please note that история with the poisoning of a blogger is one of the elements of a long-running operation to discredit and demonize Russia in the eyes of the whole world. Who are these companies whistleblowers? Bellingcat was founded by Eliot Higgins in 2014 with the onset of the crisis in Ukraine and aggravated relations between the West and Russia. The company is funded by the National Endowment for Democracy (USA), the UK Department of Defense, Soros' Open Society Foundation and a number of other undisclosed sources.

The Insider company was created in Russia in 2013 by the liberal-wing "investigator" Dobrokhotov, financed from the same sources and, together with Bellingcat, purposefully works against Russia to discredit its power structures to please Western sponsors.

In their "investigations" they successfully apply modern technologies of fooling people using the facts that have taken place, obtained mainly from the special services, their distortion and the imposition of conjectures suggesting that everything happened according to the "whistle-blowers" version.

The blogger's two videos follow the same classic pattern. Based on the information about the names, phone numbers and addresses of the FSB officers, which were probably received from the Western special services, a version is being promoted that this group has been tracking the blogger for several years using false documents and still could not poison him.

By the way, the FSB officers could actually track the blogger's movements, it is their job to "lead" the suspect, and there is nothing surprising in this. The fact that the movements of the FSB officers were recorded is incomprehensibly tied to the poisoning without presenting any evidence. A link only to unfounded examinations of Western countries, which did not show them to anyone. Further, a direct lie with reference to the conclusion of the OPCW, as if confirming the poisoning by a "novice", but this conclusion says that only certain ingredients of non-prohibited substances have been found, the characteristics of which are similar to those of substances prohibited by the convention! The blogger immediately stipulates that he is not going to prove his conclusions through the court, but which court will believe him with such evidence?

Then the next step is taken, a number of still Soviet institutions are called, once involved in the development of chemical weapons, and the gates of the already closed plant for their production are shown. Based on this, it is concluded that Russia continues to produce chemical warfare agents and is violating the law prohibiting them. This is how primitive the picture of Russia's continuing production of chemical weapons is being prepared! An even more stunning statement that the poisoning of the blogger was at Putin's command, but why was that frightened? What degenerates is this evidence for?

Telephone conversations with an "FSB officer"

The presented "evidence" was clearly not enough, and a second video with "direct" evidence is released, where a whole comedy is played with telephone "conversations", as it were, with an FSB officer who took part in the "poisoning", and he tells a stranger in detail via open telephone communication about the operation on "poisoning"!

The script of the conversation is scheduled in such a way that the “FSB officer” is asked for a specific comment on this fact and then promoted to a long conversation in which the details of the operation are laid out. The poisoners chased the blogger for several years and could not find a dose for him, even tried to poison his wife, and she confirms this without batting an eye. In the end, they poisoned him, but the noble pilots landed the plane in Omsk, and the doctors saved him. A finale worthy of a pen: the "evil" Putin hounded the oppositionist, and the grateful people saved him.

And such a conversation can be done with a trained intelligence officer ?! What man in his right mind can believe this delirium? Only narrow-minded Americans can take such a "duck".

To create the plausibility of this comedy according to the script, the well-known "agent" Sobol is brazenly trying to break into the apartment where the FSB officer supposedly lives, while the well-known "agent" Sobol is trying to break into another apartment, and the correspondent of a foreign publishing house is in another apartment. A criminal case has already been instituted against Sobol for illegal entry into someone else's apartment against the will of the owner, who turned out to be the mother-in-law of the “employee”, and the “agent” is giving testimony to the Investigative Committee.

It is well known that modern technologies make it possible to synthesize the voice of any person without problems, which cannot be distinguished from the real one. This is used to advertise drugs, falsifying the speech of famous doctors, and the same prankers have fun with high-ranking officials. It is not difficult for the special services to falsify such a conversation.

The script ends with the cleaning of the traces by "poisoners" who (twice!) Treated the blogger's clothes with a special solution. Here his cowards come up - this is no longer for discretization, but for mockery of the Russian special services, as if for their lack of professionalism. A continuation of the comedy is arranged in a few days, in Moscow and St. Petersburg, “human rights activists” go out to single pickets with a demonstration of “poisoned” cowards, and a campaign is being launched on social networks to accuse the “killers” of the special services.

Why is this all done? The main thing is the continuation in the West of the epic with the mythical "newcomer". Aggressive Russia, led by Putin, did not destroy the chemical warfare agent, continues to poison the opponents of the regime around the world with it and is ready to use it against any "democratic" country. World public opinion is preparing for such a large-scale terrorist attack with the aim of accusing Russia of all sins and completely isolating it. Some experts believe that a provocation is being prepared with the poisoning of people in the subway or shopping and entertainment center of one of the Western countries.

Inside Russia, all this is designed for an unassuming man in the street, not versed in the intricacies of political technologies and falsifications in order to undermine the power in Russia, sow distrust in society in the president and his team, taking advantage of social problems in the country. They are paving the way for a more respectable opposition figure to enter the arena, able to gain the support of the duped population and compete with Putin. In the West, they understand very well that a blogger, according to his data, cannot become a national leader, for them he is a six, hired to perform a certain role, which will then be written off or liquidated.

The attack of the West on Russia is just beginning to unfold - similar provocations are still ahead. It's not so easy that Bellingcat has already announced an investigation into the case of the Belarusian adventures in August of this year, "33 Russian heroes" with reference to these events in Belarus and Ukraine. Why did it happen? They have already begun to forget about this story, and suddenly it is again pulled out for general discussion, perhaps a "newcomer" will appear there. By the way, the "newbie" is a purely English invention, in one of the feature films there was just an episode with such a poisonous substance. Such a substance does not exist in nature, but its creation is stubbornly attributed to Russia.

Next in line is Belarus

Apparently, the next stage of discrediting Russia is being prepared, and it can develop in several directions. It is also an attempt to accuse Russia of forming private military companies for terrorist purposes of eliminating persons unwanted by Moscow and coups d'etat in "democratic" countries using chemical warfare agents. Or the presentation of "evidence" of the overthrow of the Belarusian president in August this year by the hands of "dictator" Putin in order to sever ties between Belarus and Russia. Or the discrediting of the Russian special services, which missed the "brilliant" operation of the Ukrainian special services to lure out Donbass militia fighters, and failed as a result of "betrayal" in Zelensvsky's team. Or an attempt to arrange another coup d'etat in Ukraine "with the participation" of the Russian special services. Unexpectedly, witnesses may appear, claiming the preparation of Russian PMCs, in whose arsenal there is a “newcomer”, and present the appropriate “evidence”.

The "residency" of the West is becoming impudent and is intensifying attempts to destabilize Russian society and discredit the power structures. They are expanding their activities in the post-Soviet space, drawing the former republics into confrontation with Russia through provocations and inciting anti-Russian hysteria. The West is intensively shaping an anti-Russian international and preparing it for a decisive thrust.

Ctrl Enter
Noticed oshЫbku Highlight text and press. Ctrl + Enter
We are
Interview of V. Putin to Channel One and the Associated Press AgencyWhat you didn't want to know about England
Military Reviewin Yandex News
Military Reviewin Google News
319 comments
Information
Dear reader, to leave comments on the publication, you must sign in.