December 28 2020
142
Alexander Lukashenko surprised me at the time. And very much. This is when he turned to Putin with a request to send "help" from the Russian security forces at the peak of the protests in Belarus.

Wondered why? But because he directly and concretely destroyed several common myths of Belpropaganda.

The first of them was the myth about the beloved by all Belarusian people dad. The Belarusians loved Lukashenka, they loved him. And suddenly foreign troops were needed. And isn't that strange? Suddenly all old love ended? Literally cut off?

The second was the myth of independence. In terms of finance, everything was immediately clear. And much earlier. But it came down to a purely power component. And it turned out that I needed help! Urgently! And how do you want to understand this?

The third was a myth about a kind, fluffy and socially fair Belarus. Suddenly, shots and explosions rang out. Somehow, this myth also vanished by itself. 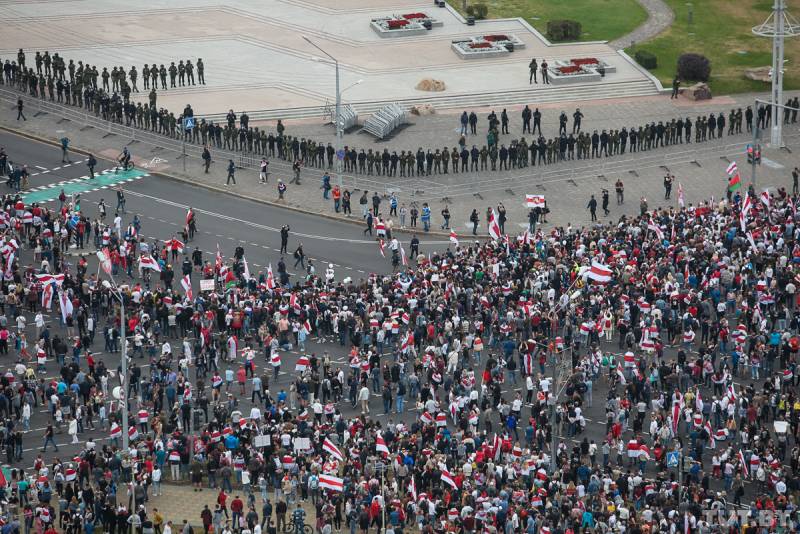 Photo: telegram channel TUT.BY
In general, August 2020 was the month of the final death of most of the common Belarusian tales. And they broke off literally in an instant. And we saw the Republic of Belarus as it really is. No sentimentality.

But there is also something else interesting ...

As a matter of fact, all these two and a half decades Lukashenka's system survived precisely due to the support of Russia. Disagreements on the Moscow-Minsk line grew. Support was dwindling. But somehow a stereotype has developed among the broad masses that Putin supports Lukashenko and that he, they say, is nowhere without Lukashenko ...

But this is already - how to say.

In general, you can say whatever you want about Putin. But, first of all, he is a rather cynical and calculating politician. And clearly does not suffer from unnecessary illusions. Unlike many other leaders in the post-Soviet space.

And the fact that all these years he maintained official relations with Lukashenka (as the head of the Republic of Belarus) does not mean anything out of the ordinary.

As for the "betrayal" on the part of Russia, one should speak out unequivocally: no one in Russia has ever sworn allegiance to the Belarusian dad.

On the other hand, some of the features of independent Belarus probably include quite sudden her claim from Russia in compensation in the amount of $ 10 billion for the Belarusian internal tax maneuver. By the way, this ally made this demand simultaneously with a hint that it would be nice to forgive $ 7 billion out of the entire total amount of future debt.

Thus, the courage of the Belarusian managers in taking loans and making strategic decisions in the economy was explained very, very simply: they were categorically not going to pay off these debts on their own.

Many experts are surprised at the rapid growth of the RB debt (since 2008). So after all, Lukashenka apparently had no intention of paying these debts from the beginning?

And then it turned out that Russia was not obliged to provide anyone with either money, security officials, or a place of residence just like that (for thanks).

Both Karabakh and Ukraine

It's just that something very similar happened with Armenia. Russia (as an ally) was remembered there after the start of a large-scale attack on Karabakh.

That's how the shells began to explode, that's how they immediately remembered. And Mr. Pashinyan suddenly started calling the Russian president.

And the insane boldness of the opposition prime minister's foreign policy was explained, it turns out, very simply: if something happens, Russia will surely save. Since she allegedly was "obliged".

Well, as a result, there was an embarrassment.

As a matter of fact, sometimes some regret that in 2014 the Russian army did not reach “Lvov”.

I must say right away that these are very strange regrets.

Why would Russia throw its resources into the mouth of someone else's war? And why do we need Ukraine such at the cost of?

Now we are seeing a conflict in Belarus. Severe internal conflict. But at the same time, none of the parties to this conflict is pro-Russian by definition.

Then why should Russia invest there seriously? Why, excuse me?

It turned out funny: objectively, in the Belarusian situation, a lot depends on Russia. But neither the authorities, nor, especially, the opposition, have ever seriously oriented themselves towards Moscow politically. And now it’s too late.

That is, in fact, today neither the one nor the other has normal communication with Moscow there. And neither the pro-government, nor the opposition.

And you know what is the most interesting thing? So after all, both those and others are now beginning to intimidate Mother Russia:

"If you don't help us, it will be worse for you."
Yeah, we got scared.

In general, of course, the Belarusian direction today looks difficult for Russia. Problems, of course, there can be "grabbed" above the roof. But with some breakthroughs, our neighbor is now very, very difficult.

And yes. Here's another thing.

The Russian security officials were denied something.

Although it was probably not so easy for the Belarusians to accept such a refusal.

That is why, apparently, they began to throw information into the Belpress so actively that, they say, those guys who work on the Belarusian streets without insignia are supposedly Russian or almost purely Dagestan OMON ...

Ctrl Enter
Noticed oshЫbku Highlight text and press. Ctrl + Enter
We are
A great interview with Sergey Lavrov: about Ukraine, Obama and IranWhat you didn't want to know about England
Military Reviewin Yandex News
Military Reviewin Google News
142 comments
Information
Dear reader, to leave comments on the publication, you must sign in.