Andreevsky flag was raised on the mine defense ship "Yakov Balyaev" 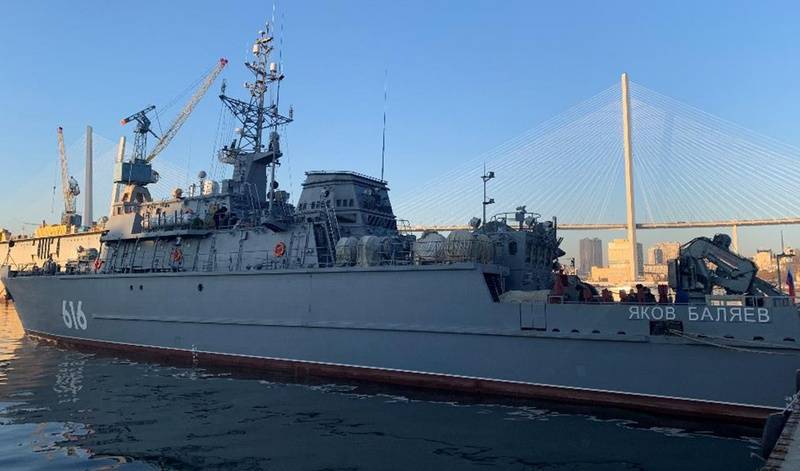 The Yakov Balyaev mine defense ship raised the Andreevsky flag. The solemn ceremony took place in Vladivostok. The press service of the Pacific Fleet reports.


The Pacific Fleet was replenished with a mine defense ship (minesweeper) Yakov Balyaev, project 12700. The ceremony of raising the Andreevsky flag took place on Korabelnaya embankment in Vladivostok. It was attended by the commander of the Pacific Fleet, Admiral Sergei Avakyants, personnel, veterans of the Navy.

After the signing of the act of acceptance of the ship from the industry and the solemn ceremony of raising the Andreevsky flag, on the basis of the order of the Commander-in-Chief of the Navy, the ship was included in the combat composition of the Pacific fleet
- said in a statement.

Marine minesweeper "Yakov Balyaev" is the fourth serial (fifth in a row) ship, which was laid down on the stocks of the Sredne-Nevsky shipyard, however, due to a fire on the first serial minesweeper "Georgy Kurbatov", "Yakov Balyaev" became the fourth mine defense ship in the line of the project 12700 "Alexandrite". Laid down on December 26, 2017, launched on January 29, 2020. He arrived in the Far East on October 22, passing the Northern Sea Route.

The ship is designed to combat all types of modern sea mines, it is equipped with modern hydroacoustic stations and an automated mine action control system. The ship's displacement is 890 tons, length - 62 meters, width - 10 meters, full speed - 16 knots, crew - 44 people.