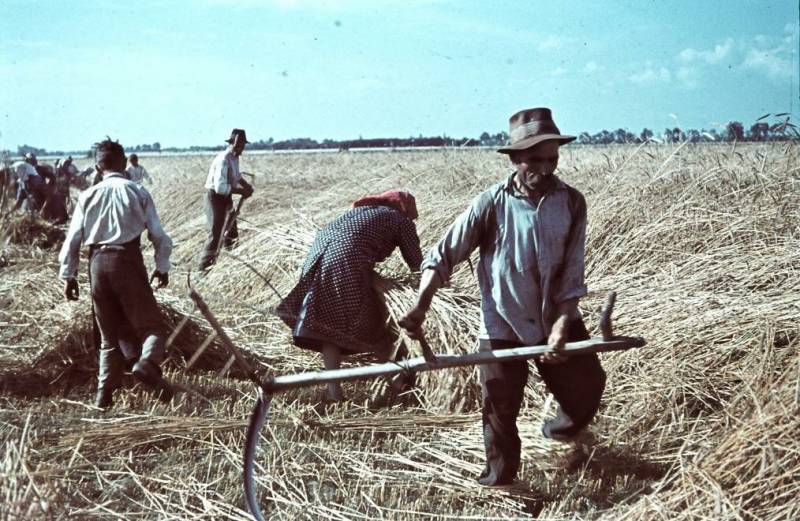 This was a very interesting archive find. In one of the previous articles, namely in “Harvests and procurement of bread in the occupied territories of the USSR", I already touched upon the topic of agriculture in the regions occupied by the Germans and tried to roughly determine what crops were collected there. Now there is accurate reporting data for 1942 and 1943.

Of course, I understood that the German occupation administration was collecting data on plowed area, yield and harvest volume. These are the most basic, starting points for any agricultural policy required, for example, for calculating taxes, grain procurements and supply plans for the non-agricultural population, regulating the grain market and other needs. It could not be that the Germans did not collect and generalize this data. But where is this generalized result in the documents? In the previous article, I expressed the hope that the document would be found, albeit without much enthusiasm. You never know what, went for kindling or rolling.

And now this document was found. It was an appendix to the monthly report of the Economic Headquarters Ost (1-31 October 1943). There was some logic in this: we received the reporting data at the end of September 1943, and included it in the monthly report. But for a researcher it is not at all so easy to guess that the most important statistical data on agriculture in the occupied territories of the USSR should be looked for there. In addition, the document was in the middle of a rather bulky case, the annotation to which said that it contained reports on the situation in the occupied areas of the economic inspections, the Ost Economic Headquarters, the authorized Reich ministry for the occupied territories, the main command of Army Group South, and so on. The abstract, in general, hinted at the current official correspondence. In general, the document could only be found by chance, during continuous scanning in some vague searches for something interesting. 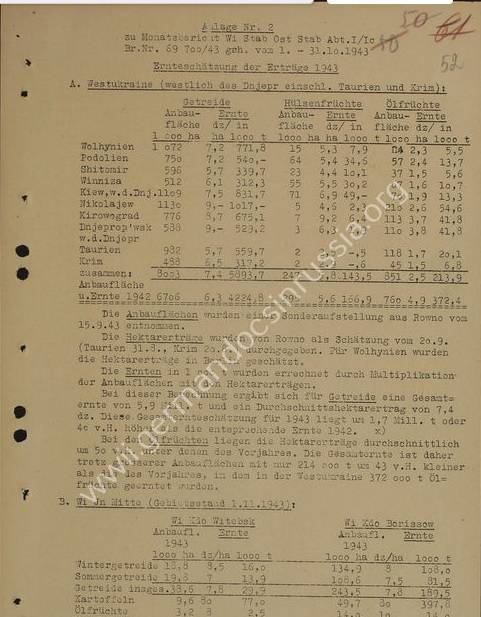 The beginning of the report on crops and harvests in the occupied territory of the USSR. I can't even believe that such a thing could be found
Whatever it was, the document was found, and you can look at the agriculture of the occupied territories of the USSR in a statistical context. We are most interested in cereals, but for other researchers, I report that the report also includes data on legumes and oilseeds.

The report provides data for all occupied areas: managed by both the civil administration and the military-economic authorities. This is very important, since German documents do not often and in detail describe the situation in the rear of army groups that occupied vast areas. 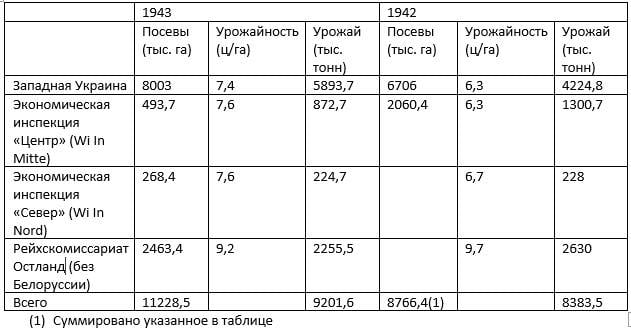 It is easy to supplement the data based on the given size of the harvest and yield. In 1942, 2711,3 thousand hectares were sown in the Ostland Reichskommissariat (excluding Belarus), and 340,2 thousand hectares in the Economic Inspectorate "North". In total, crops for 1942 in these areas amounted to 11817,9 thousand hectares.

It is interesting to note the use in the document of the term "Western Ukraine" (Westukraine). Formally, the Reichskommissariat Ukraine continued to exist and was formally abolished on November 10, 1944. But by the end of September 1943, almost the entire left bank of the Dnieper was already lost; by December 1943 (the report itself was drawn up on December 1, 1943) was completely lost, Soviet troops took Kiev. The rear of Army Groups "South" and "A" moved to the territory of the Reichskommissariat, military and civilian administration of these territories was mixed. Therefore, in the document, this part of the occupied territory is highlighted with such a special term.

These are the gross production of cereals, quoted at the time of the standing estimate made before the harvest. According to the experience, the barn yield was about 15% lower than the estimated for the growing; in any case, the Germans, in their estimates of Soviet yields, adopted such a coefficient for converting estimates into a granary harvest. In 1942, 7126 thousand tons were actually harvested, in 1943 - 7821,3 thousand tons of grain crops.

Possible inaccuracies in plow and yield estimates. There were, of course, inaccuracies. First, due to the possible underreporting of data on the ground, since the Soviet agronomists who worked for the Germans were far from always loyal to them. Secondly, at the expense of secret crops of the peasants, which were greatly facilitated by the chaotic nature of land relations and the inability of the occupation authorities to control all farms; secret plowing was a typical peasant technique for ensuring their survival in wartime. Thirdly, at the expense of plowing in areas that were actually controlled by the partisans. I think that for 1943 it is possible to add another million hectares and 760 thousand tons of grain harvest to the given data.

For Soviet agriculture of the late 1930s, this is a normal level of procurement, taking into account the obligatory grain deliveries and payment in kind by the MTS and provided that the bulk of the peasants work on collective farms. So much is given by data on average harvests and procurements in 1938-1940: gross harvest - 77,9 million tons, government procurements - 32,1 million tons, the ratio is 41,2%. Despite plans to de-collectivize peasants, the German occupation administration failed to dissolve the collective farms, and grain production was carried out mainly by collective farms. The conclusion that the level of procurement was normal undermines numerous assurances in the literature that the Germans were only thinking about robbing the peasants. First, robbery of peasants is possible only once, after which a sharp drop in plowing and harvesting inevitably follows, which follows from the lack of seed material in conditions of total rake of grain from peasants. German data show a slight reduction in the area under crops by about 600 thousand hectares, which is associated with the situation at the front and the activity of the partisans, and the yield in 1943 was better than in 1942, which at least indicates that the sowing was normal. Secondly, the Germans clearly planned to settle in the occupied territories for a long time and feed the German troops from them, therefore they were not interested in undermining agriculture. Third, it follows that the confiscation of grain from peasants in 1942 was a local phenomenon and was associated with operations against partisans.

We do not yet have the opportunity to assess the level of harvests from the 1941 harvest, since accurate reporting data for this year have not yet been found. However, we can already say with sufficient certainty that the Germans had such data, and the report lies somewhere in the archives.

The preparations from the 1943 harvest were much less and amounted to 1914 thousand tons, which is undoubtedly due to the fact that during the fighting the Germans lost significant territories in Ukraine, and just during the procurement of grain. Part of the 1943 crop grown under the Germans went to the Red Army.

The decline of agriculture in wartime

The total harvest under occupation in Ukraine was about 40% lower than in 1934, and 66% lower than the good harvest in 1933 or the harvest in 1940 (it is difficult to calculate accurately due to the territorial incomparability of data). Before the war in 1940, judging by the yield and harvests, 12,3 million hectares were plowed in the Southwestern and Southern regions of Ukraine. In 1942, plowing was 54% of the pre-war level and in 1943 - 65%. This is not surprising given the decline in the working-age rural population, the decline in the number of horses and the sharp decline in the use of tractors due to lack of fuel. Quite a typical picture of the decline of agriculture in war conditions.

However, German data show that they had a certain potential in the restoration of agriculture, and in Ukraine crops in 1943 increased by 1,7 million hectares compared to 1942, which even largely compensated for the reduction in crops in other occupied areas. The higher harvest in 1943 was apparently associated with better weather conditions, as the pre-war data show the same fluctuations in yields and harvests. Only now they could not take advantage of these results due to defeats at the front at the end of 1943 and at the beginning of 1944.