Oceanographic vessel for the Ministry of Defense GUGI launched in Kaliningrad 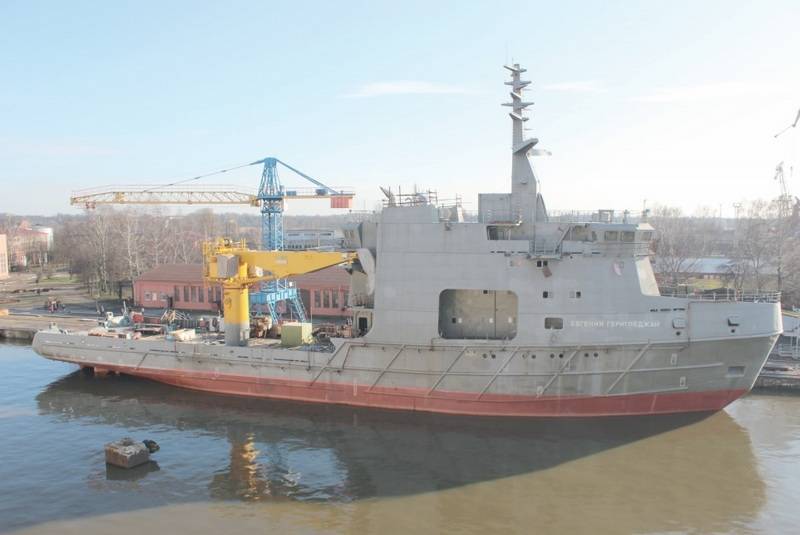 Attending the ceremony, the interim head of the Main Directorate of Deep-Sea Research of the Russian Ministry of Defense, Alexander Konovalov, said that according to the plans of the military department, the oceanographic research vessel (OIS) Yevgeny Gorigledzhan should become part of the Navy in November 2021.

The company itself is confident that the ship will be delivered on time, without disrupting the schedule.

In February of this year, Yantar Shipyard announced the resumption of the construction of the OIC Yevgeny Goriglezhan, which was stopped in 2018. This was achieved through a new contract signed between the Ministry of Defense and the Yantar Shipyard, signed on January 31 this year.

In fact, this vessel is being rebuilt from the MB-305 sea tug of the B-92 project of the Polish construction in 1983. The formal laying (actually re-laying) of the Yevgeny Goriglezhan vessel was carried out at the Yantar shipyard on March 19, 2016, while the date of delivery was then called 2017. In November 2018, work on the ship was suspended, negotiations on the further execution of the state contract were conducted throughout 2019.

The displacement of the vessel after re-equipment should be 4 thousand tons, length - 81 m, width - 16 m, autonomy - 30 days, crew - 32 people and 25 members of the expedition. The main purpose is "underwater technical work".

The vessel is named after Evgeny Alekseevich Goriglejan, a Soviet and Russian design engineer, general designer of special-purpose nuclear submarines at the Rubin Central Marine Design Bureau.
Ctrl Enter
Noticed oshЫbku Highlight text and press. Ctrl + Enter
We are
In Kaliningrad, resumed construction of a research vessel for the GUGITwo oceanographic vessels launched at the Yantar Shipyard for the GUGI of the Ministry of Defense of the Russian Federation
Military Reviewin Yandex News
Military Reviewin Google News
23 comments
Information
Dear reader, to leave comments on the publication, you must sign in.