The myth about Decembrism and "knights without fear and reproach" 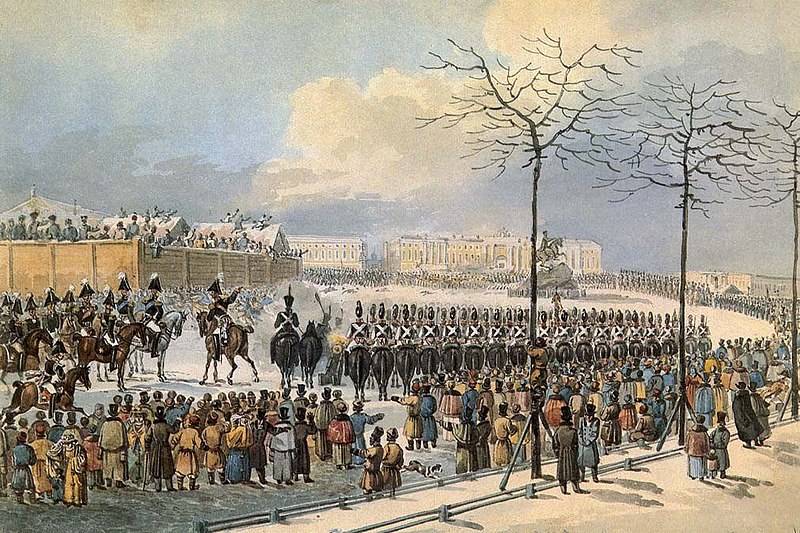 195th anniversary of the Decembrist uprising. A myth has been created in society about "knights without fear and reproach" who, for the sake of high ideals, were ready to sacrifice their own well-being and even life. However, the facts suggest the opposite: they were dangerous rebels and cynical conspirators, whose success would have led to disaster much earlier than 1917.

In liberal pre-revolutionary Russia, a myth was formed about fearless fighters against absolutism. The noble elite, the color of the nation. People who tried to crush the serf system, "free" Russia from "slavery." The nobles who fought for the ideals of the Great French Revolution - freedom, equality and brotherhood.

Later, Soviet historiography (with some changes) supported this myth-making. V. Lenin called it the time of noble revolutionism. When the struggle against tsarism was led by a small group of the best representatives of the nobility, who, for the sake of lofty ideas, renounced their class and began a struggle for the liberation of the people. Lenin also noted:

“The circle of these revolutionaries is narrow. They are terribly far from the people. But their case was not lost. "
In fact, the Decembrists were the predecessors of the Februaryists of the 1917 model.

A narrow elite group, influenced by the West, decided to "transform" Russia. Young people of nobility (mainly officers) fell under the influence of "advanced" revolutionary ideas that came from Europe. These were the ideas of predominantly French enlighteners and revolutionaries of the XNUMXth century.

Patriotic War of 1812 and overseas campaigns of the Russian army in 1813-1814. made it possible for the nobility and the officers to see the "progressiveness" of the elimination of serfdom, obsolete feudal order and absolutism (autocracy). Also, the idol of many members of secret societies was Napoleon and his progressive reforms. The officer youth began to create secret organizations, like Masonic lodges. Draw up revolutionary programs and coup plans.

In fact, the same thing happened in 1917 when the Russian elite opposed the tsar. The Decembrists, hiding behind quite humane slogans understandable to the majority, opposed the legitimate government. Objectively, they worked for the then “world community”, which was striving to weaken Russia at any cost. Hence the plans for the physical destruction of the royal family (these plans were carried out after the 1917 revolution).

However, by 1825, only an insignificant part of the elite of the Russian Empire was affected by decay. In general, the officer corps, generals, guards and officials were in favor of the king. And Nicholas I showed will and determination.

The Fifth Column in 1825 was a pitiful bunch of conspirators, stupid, poorly organized. They led the soldiers, who did not even understand what was happening. Therefore, the "first revolution" was easily crushed.

It is obvious that the palace coup in the capital and the subsequent "reforms" could cause confusion in Russia.

The emergence of various national separatists, the collapse of the country, uprisings in military settlements, peasant war (Pugachevism), the intervention of foreign powers.
The military "reform", the fall of the authority of the authorities and the hierarchy at the top (the officers 'actions against the authorities) led to the disintegration of the army and soldiers' riots. Also, the victory of the conspirators inevitably led to the struggle of moderate and radical revolutionaries.

The result is a severe crisis that would have thrown Russia politically and militarily and economically back tens or hundreds of years.

Any attempts to Europeanize Russia always lead to heavy losses and disaster. 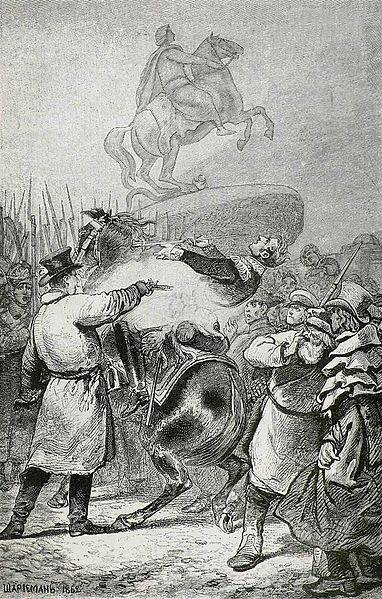 The rebels planned on December 14 (26), 1825, to bring the controlled units to Senate Square before taking the oath of allegiance to the guard to Nikolai Pavlovich. The soldier was raised under the slogan of loyalty to the first, legal oath, loyalty to Emperor Constantine I (although he had already renounced the throne).

The fact that the Senate swore allegiance to Nicholas did not really matter. The main role was played by the guard. According to the plan of Sergei Trubetskoy (there were several of them, and they were constantly changing), the conspirators wanted to bring out into the street most of the guards regiments that had not sworn allegiance to Nikolai, and force him to renounce power.

Then it was proposed to convene a National Council, which would determine the future structure of Russia. The majority were in favor of a constitutional monarchy, while some (Russkaya Pravda by Pestel) proposed a federal republic.

Interestingly, Tsar Alexander I, who had a good network of agents, regularly received reports of the growth of the spirit of free-thinking in the army and of a conspiracy directed against him. But he did nothing. During this period, the conspirators planned to raise a mutiny during army maneuvers in southern Russia in the summer of 1826. They wanted to capture or kill Alexander (that is, to overthrow the power).

The Southern conspiratorial society had greater forces than the Northern. It included several regimental commanders, General S. Volkonsky, who commanded the brigade. Only shortly before leaving, Alexander gave the order to begin the arrests of the conspirators.

The problem has already fallen on Nikolai. A few days before the uprising, he was warned by the chief of the General Staff Dibich and the conspirator Rostovtsev. Therefore, the Senate was sworn in in the morning.

When it became clear that most of the guards would not act, the conspirators returned to the use of force, traditional for the era of palace coups of the XNUMXth century.

The Naval Guards crew, in which most of the officers supported the secret society, had to refuse to take the oath to Nicholas, go to the Winter Palace, capture the imperial family and the guards generals. The Moscow Guards regiment blocked the approaches to the Senate and occupied it. The Grenadier Regiment was in reserve.

But as a result of internal contradictions among the conspirators, this plan collapsed. The confusion (improvisation) began.

By 11 o'clock, 600-800 Muscovites were brought to Senate Square. Later, the guards sailors (who were never taken to the Winter Palace) and the Life Grenadiers made their way to them. The rebels had about 3000 bayonets.

12 thousand soldiers (including 3 thousand cavalry), 36 guns were put up against them. The conspirators chose a wait and see tactic. They waited for darkness, hoping that some regiments would go over to their side, and government forces could upset the movement of the urban masses.

At first, Nikolai and his entourage tried to convince the soldiers to come to their senses. However, the Decembrist Kakhovsky shot at the hero of the Patriotic War, the favorite of the soldiers, the governor-general of St. Petersburg Mikhail Miloradovich. Having happily escaped wounds in more than fifty battles, the general also received a bayonet wound from Prince Obolensky. The mortally wounded commander allowed the doctors to remove the bullet that pierced his lung, examining it and seeing that it was fired from a pistol, he exclaimed:

After unsuccessful attempts to bring the rebels to order, Aleksey Orlov (his brother Mikhail was a Decembrist), commanding the Life Guards Cavalry Regiment, personally went on the attack on the square of the rebels. But the demonstrative attacks were unsuccessful.

The guards artillery was put into action under the command of another hero of the wars with France, the chief of artillery of the guards corps Ivan Sukhozanet. The artillery scattered the rebels with its fire. The uprising was suppressed. 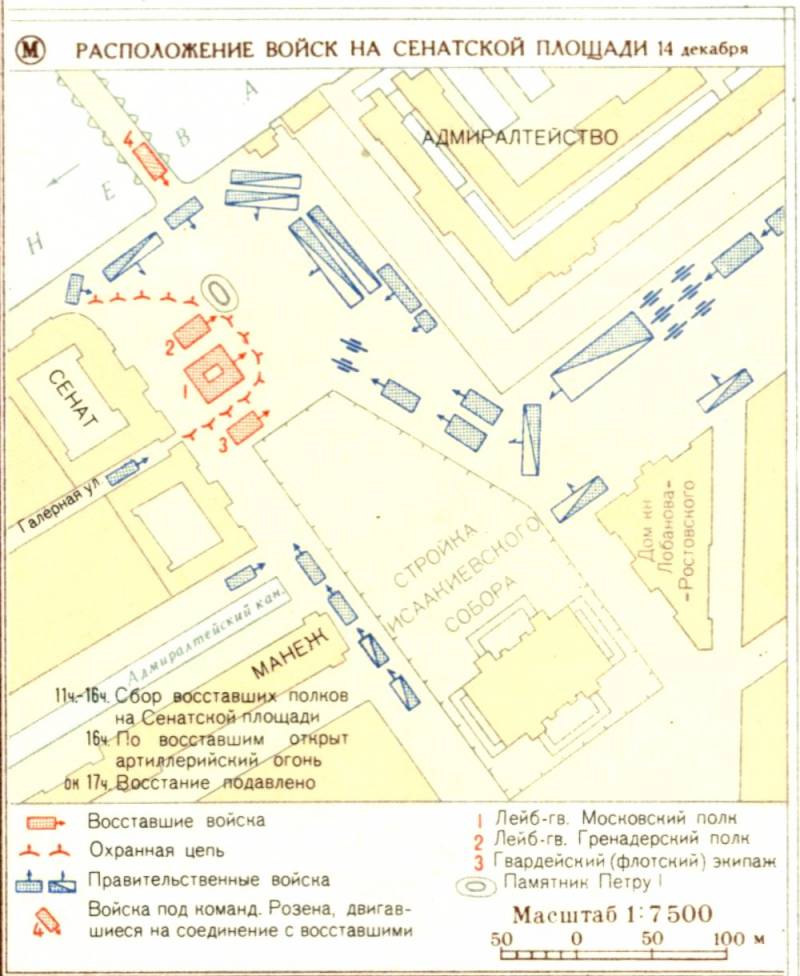 The plans "bloody and crazy"

The great Russian genius Alexander Pushkin accurately assessed the essence of the Decembrist uprising. In a note "On public education" he noted:

The rebellion on Senate Square inevitably led to unrest, "senseless and merciless." The Western Decembrists, who did not understand the essence of Russian civilization and the people, opened Pandora's box with their amateurish actions, like the Februaryists in 1917. The visible humanism of their slogans led in fact to a lot of blood.

In particular, the peasant question, key in Russia at that time, was poorly worked out by the Decembrists. According to most of their projects, the emancipation of the peasants was assumed without land, which the peasants themselves considered a form of robbery. That is, the Decembrists defended the interests of the nobility.

It is clear that this with a high probability led, especially in the context of a crisis of central power (palace coup) and army “reforms” (its destruction), to a new Pugachevism and a large-scale peasant war.

Plus the simultaneous confrontation at the top. The seizure of power by the Decembrists led to the resistance of a significant part of the generals, officers, court and bureaucratic elite. This led either to a counter-coup, or to a revolutionary dictatorship, terror (as it was in France and how it will be after 1917 in Russia).

It is worth noting the humanity and nobility of the sovereign Nicholas I. The military rebels were subject to execution. They planned a military coup and the possible liquidation of the dynasty. However, only 5 people were executed. Nikolai pardoned 31 (out of 36 sentenced to death by the court).

Active conspirators were awaited by hard labor and eternal settlement on the outskirts of the empire.

A significant part of the rebels were pardoned, only about 300 people were found guilty, 121 conspirators were brought to trial.

Only the Decembrists were punished. Relatives, friends and sympathizers were not persecuted, they retained their positions.

In Western Europe, England or France, with the same events, the heads would fly in hundreds and thousands. And blood would flow like a river there.