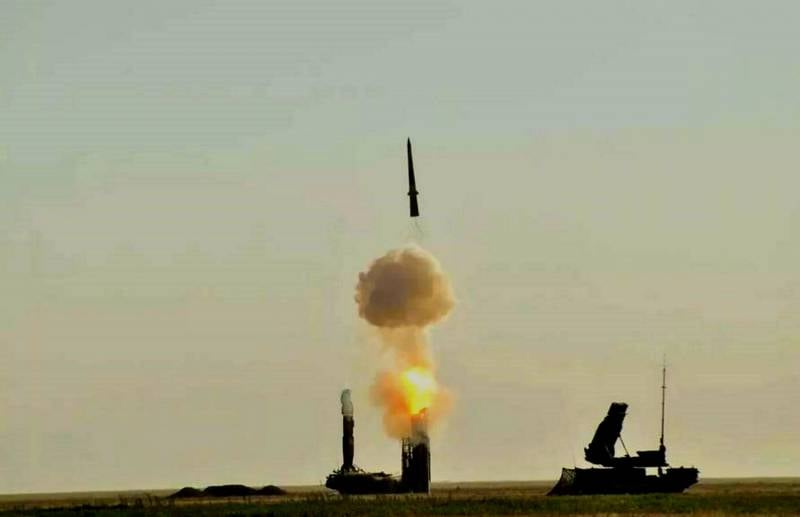 Announced a few days earlier by the EurAsian Times with reference to Russian military-analytical portals, the ability of the promising S-500 Prometheus (55R6M Triumfator-M) anti-aircraft missile system to intercept hypersonic (with a speed of up to 15,6M) subtle means of aerospace attack of the enemy by means of 10,3-swing anti-missiles with an unnamed index, once again provoked lively discussions in domestic observer circles.


In particular, the alleged effectiveness of Prometheus in countering exoatmospheric ballistic targets on the marching sections of trajectories, as well as endoatmospheric warheads of intercontinental ballistic missiles that crossed the Karman line at an altitude of 100 km (on the descending branch of the trajectory).

The emergence of such interest is not surprising at all.

Indeed, in addition to the parameters of the S-500 air defense system given by the EurAsian edition, the notorious militaryrussia.ru portal and other domestic military-technical resources, referring to competent sources in the Russian Ministry of Defense and the headquarters of the Almaz-Antey Air Defense Concern, indicate the ability of promising missiles - interceptors 77N6-N / 1 to intercept both high-speed aerodynamic and ballistic targets in the dense layers of the atmosphere, and endoatmospheric objects at altitudes from 185 to 200 km and more.

Undoubtedly, the established tradition of significantly overestimating the tactical and technical parameters of advanced air defense-missile defense systems at various stages of development is characteristic of both the Pentagon and the key American military-industrial corporations Raytheon and Lockheed Martin, as well as representatives of the Russian defense department and JSC "Concern VKO" Almaz-Antey ".

And as we were able to make sure in the course of a more detailed analysis of the sketch of the 77P6 launcher, as well as the design and aerodynamic layout of the alleged 77N6-N / 1 missiles (sketches of these products appeared on the pages of numerous military-technical portals in the period from 2013 to 2019), not the promising S-500 "Prometey" air defense system was also an exception.

In particular, having familiarized yourself with the technical sketches and drawings of the 77P6 self-propelled launcher, presented to the public on June 10, 2011, as part of a demonstration of special equipment in Bronnitsy near Moscow, it is not difficult to come to the conclusion that we have an upgraded 9A82M4 ( The standard version is integrated into the S-300V4 military anti-aircraft missile systems), equipped with two 1460-mm transport and launch containers about 12 m long (versus 10,53 m for the 9A82M4) to accommodate the 77N6-N / 1 air defense missile systems.

In the same turn, the 77N6-N / 1 SAM is an improved modification of the 9M82MV ultra-long-range anti-aircraft guided missile with a more massive and "long-playing" solid-propellant charge of the first (starting) stage, increasing the 77N6-N1 range from 350-400 (for 9M82MV) to 500 –600 km respectively.

Meanwhile, the aerodynamic configuration "bearing cone" (with a similar area of ​​the mid-section) and the previous thrust of the solid propellant engine of the 9nd (combat) stage, characteristic of the 82M2MV missiles, provided only a slight increase in flight speed from 2600 to 3055 m / s (10,3M), which was indirectly confirmed by the data indicated by the "EurAsian Times".

As for the sounded maximum speed of targets hit by the 77N6-N1 missile defense system (15,6M = 4500 m / s), it fully and completely corresponds to the 9M82MV SAM indicators of the S-300V4 anti-aircraft missile system, ensuring the interception of most promising hypersonic aerospace enemy attacks both on colliding courses and in pursuit.

Consequently, no sensational information was presented in the EurAsian Times publication.

For the most objective assessment of the possibility of intercepting exoatmospheric targets by means of the 77N6-N1 SAM interceptors, first of all, it is necessary to pay attention to the architecture of the control system of the latter.

Based on the sketches published on the network, you involuntarily come to the conclusion that the combat stages of the 77N6-N1 SAM (as well as the 9M82MV) have only a block of four all-turning tail aerodynamic rudders, while four more cruciform planes are fixed tail stabilizers combat stage 77N6-N1.

Consequently, despite the highest energy potential and speed of the order of 11000 km / h, which provide the 77N6-N1 interceptor with the ability to fly along a ballistic trajectory with an apogee of the order of 100-120 + km, the effectiveness of aerodynamic controls will remain only in the upper layers of the stratosphere and the lower layers of the mesosphere ( 35–55 km), excluding the possibility of maneuvering in the lower layers of the thermosphere and intercepting exoatmospheric ballistic objects of the enemy, completely refuting the data of the militaryrussia.ru portal.

Nevertheless, such a possibility can be realized in the case of equipping the combat stages of the 77N6-N1 interceptors with "gas-dynamic belts" of transverse control engines (DPUs capable of functioning in extremely rarefied layers of the thermosphere) like the Mk 142 kinetic interceptors of the American SM-3 Block IA / IIA interceptors and super-maneuverable anti-aircraft missiles 9M96DM.