"Coalition-SV" and XM1299 as a prospect for self-propelled artillery 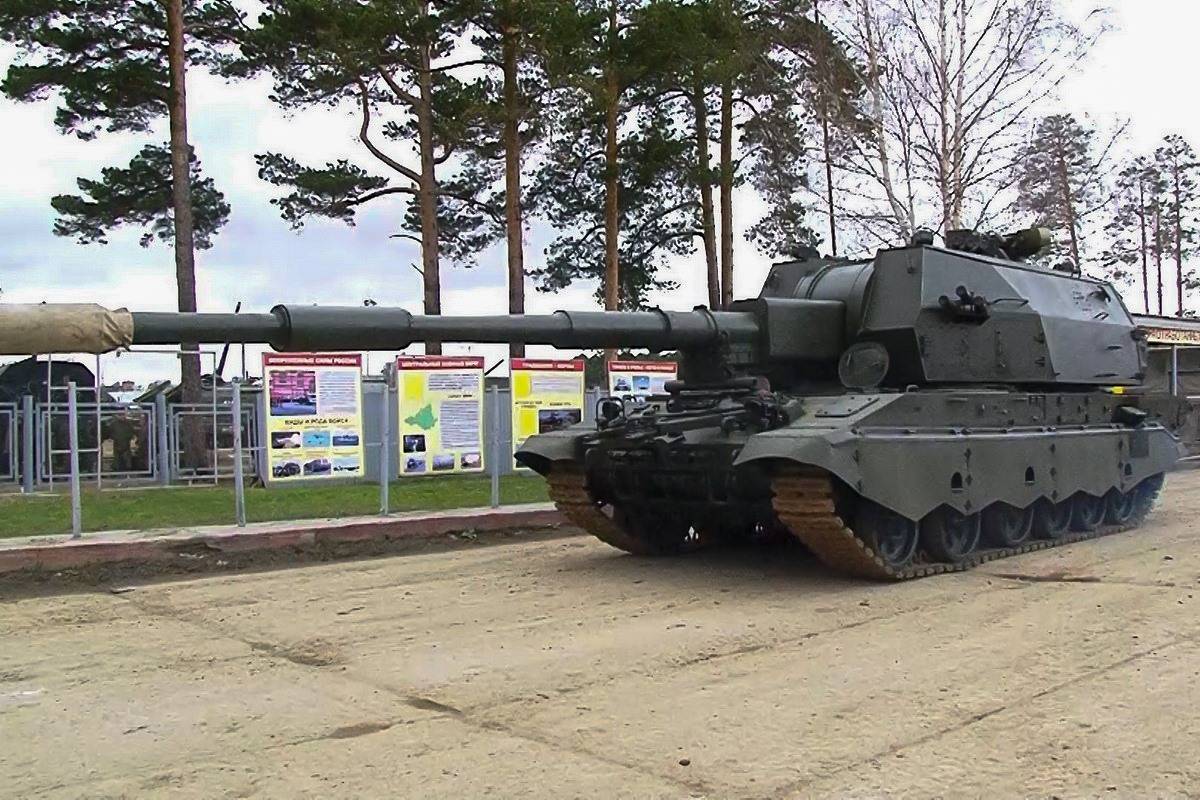 One of the built ACS 2S35 "Coalition-SV". Photo of the Ministry of Defense of the Russian Federation

Leading countries continue to develop self-propelled howitzer artillery for the ground forces. As part of this direction, a promising self-propelled gun 2S35 "Coalition-SV" is being created in Russia, and in the USA, work is underway on the XM1299 project. In the foreseeable future, both these self-propelled guns will go to the troops and become massive, as a result of which the appearance of artillery will seriously change. Such changes will be possible due to a number of interesting ideas on which new projects are built.

The development of the future "Coalition-SV" started in the middle of the XNUMXs. The goal of the project was to create a promising artillery complex, including the ACS itself, a new weapon, a transport-loading vehicle and ammunition. Due to new technical solutions, it was required to provide a significant increase in the range and accuracy of fire.

By the mid-tenths, the 2S35 project was brought to the construction and testing of full-fledged prototypes. One or another work on checking and fine-tuning the design continues to this day. It is known about the construction of small batches of equipment for use by the troops. A full series has yet to be launched, but is expected in the near future.

The American rival of "Coalition-SV" appeared much later. The program for the creation of the Extended Range Cannon Artillery (ERCA) long-range howitzer was launched only in 2015. Subsequently, a prototype gun in a towed configuration was manufactured and tested, and since 2018, a prototype ACS XM1299, based on a serial armored vehicle, has been tested. 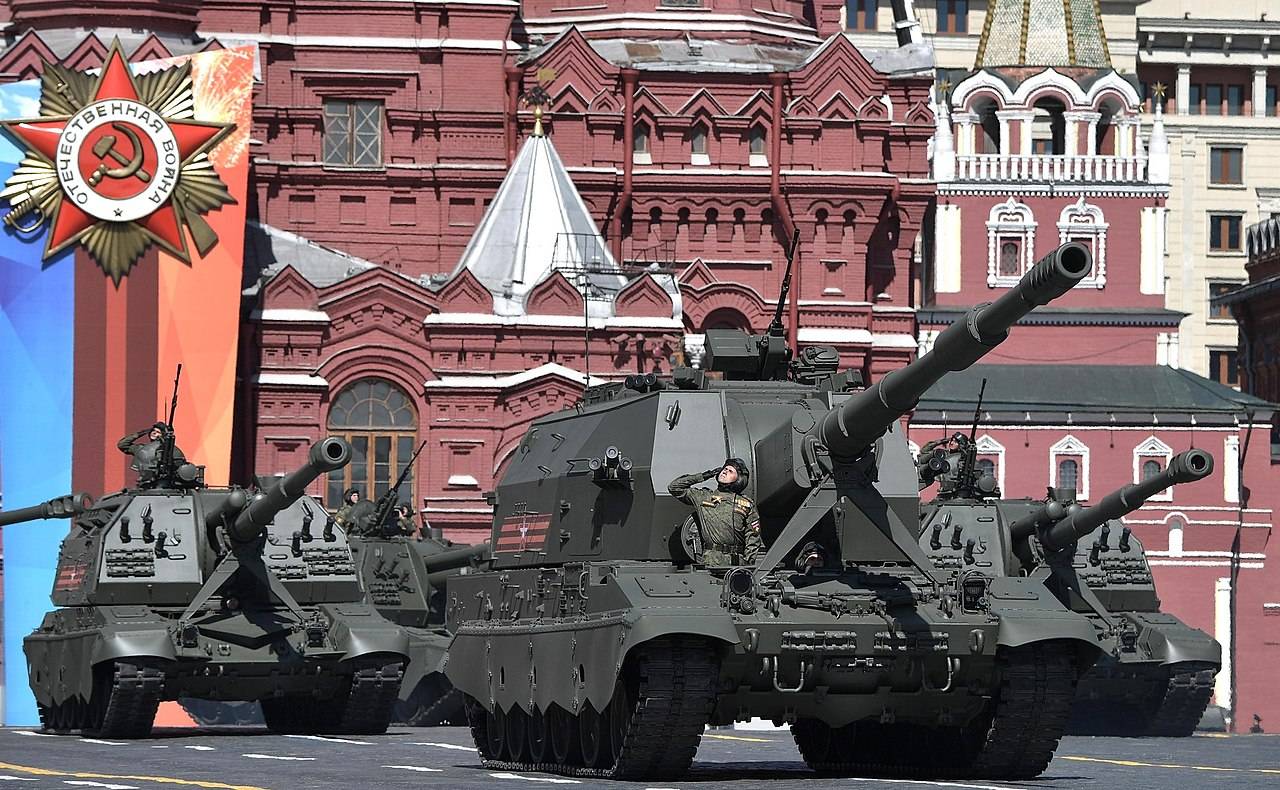 "Coalition-SV" in a parade crew on Red Square. Photo by AP RF
The objectives of the ERCA project are quite simple. By reworking the barrel of existing 155-mm guns and developing new shot components, it is planned to obtain a firing range of at least 80-100 km and ensure an increase in the accuracy of fire. These tasks are being successfully solved, but the desired results are still far away, and the XM1299 is not yet ready to enter service.

"Coalition-SV" is a turret-mounted ACS on a chassis tank T-90 (a variant on the Armata platform is expected in the future). A new 152 mm howitzer 2A88 was specially developed for her. This gun has a 52-caliber barrel with a developed muzzle brake and recoil devices. The gun is housed in an uninhabited turret and supplemented with automatic loaders and mechanized packs for 70 rounds. A modern fully digital fire control system has been applied.

Howitzer 2A88 uses modular-type separate loading. It can use the full range of existing 152-mm shells, and in addition to them, new samples are being created. The automatic loader provides a rate of fire of more than 10-12 rds / min; its design does not require returning the gun to its original position for reloading. The shot is fired using a microwave ignition system. 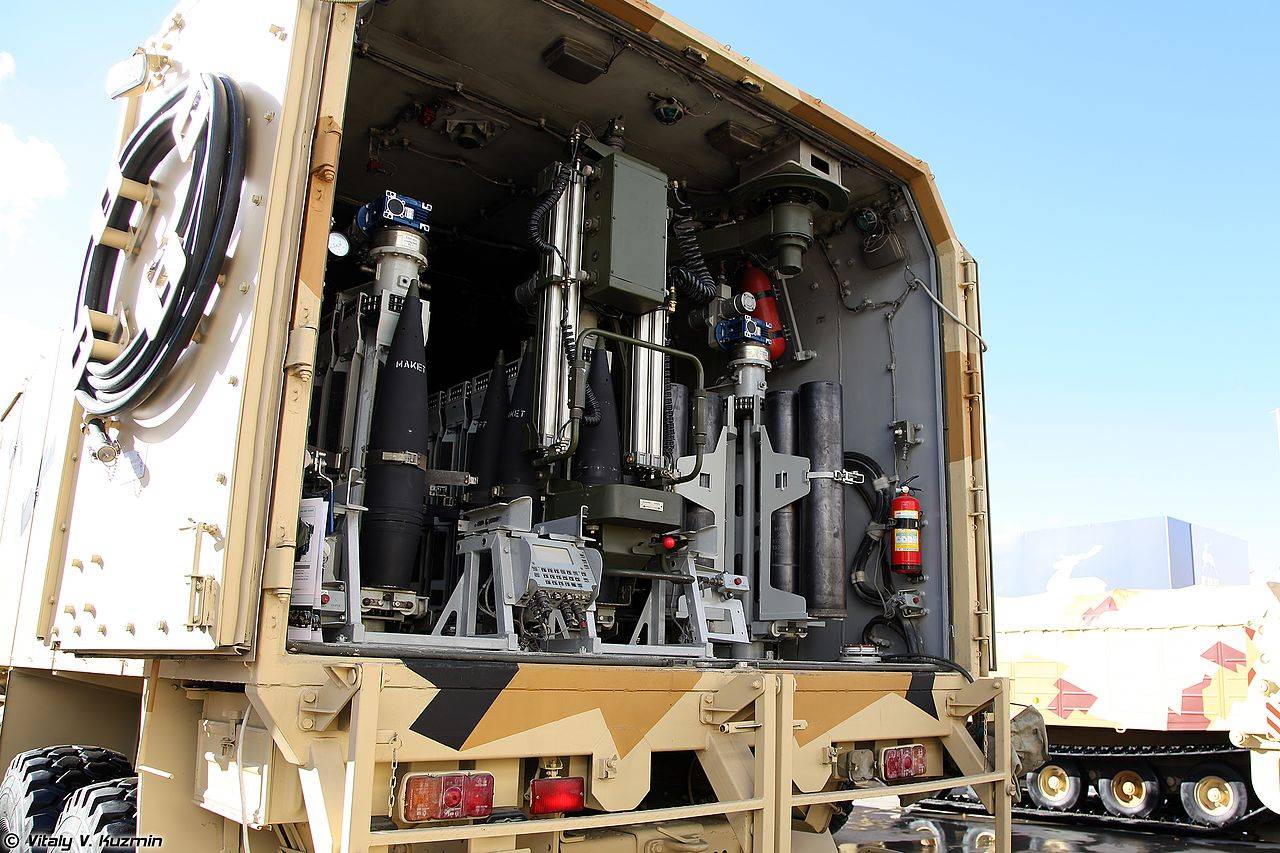 Units of an automated transport and loading machine for ACS 2S35. Photo Vitalykuzmin.net
The new weapon makes it possible to send standard unguided shells to a range of up to 40 km. A promising guided projectile is being developed, the initial speed of which will exceed 1 km / s, and the range will reach 80 km. Earlier it was reported that experimental products of this type confirm the calculated characteristics of range and accuracy. Thus, a full-fledged artillery complex with the highest characteristics will enter service.

The American XM1299 self-propelled gun in its current form, for economy and unification, is based on the serial chassis from the M109A7 with a revised manned fighting compartment. The turret has a new XM907 ERCA gun with a 58-caliber barrel. An updated LMS is also used. In its current form, ammunition is fed from the stowage manually, but the development of an automatic loader is proposed. When it appears, the rate of fire will increase from 2-3 to 8-10 rds / min.

The XM907 howitzer is capable of using existing shells and charges, but fundamentally new shots are needed to obtain maximum performance. Now the XM1113 guided rocket projectile is used in tests. Just a few days ago, during the next test firing, he managed to send it to 70 km. The XM1155 projectile with a range of at least 100 km is being developed.

Of great interest is история two promising ACS. The Russian 2S35 was created as an equal or better answer to the latest foreign samples created by the end of the nineties. When the appearance of the future "Coalition-SV" took shape and its main characteristics became known, the United States launched its ERCA program. Its result in the form of the XM1299 ACS should surpass the Russian competitor and return the lost advantages to the American army. 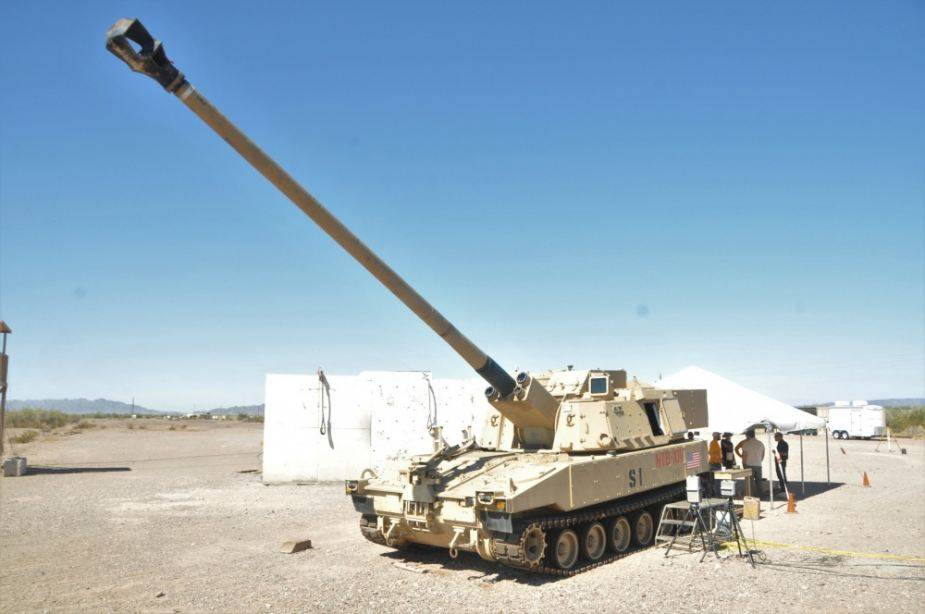 Experienced ACS XM1299. US Army Photos
It is easy to see that the two projects of promising self-propelled guns are based on common requirements and similar ideas. The main point in common between the two projects is the requirement to increase the firing range in comparison with existing models. This parameter should increase by 2-3 times, which is why it was necessary to develop a number of new components in both programs.

The methods for solving the problem are similar. Products 2A88 and XM907 differ from their predecessors in a longer barrel length, and are also equipped with more advanced recoil devices. It can be noted that the Russian howitzer is longer than the serial 2A64 from the 2S19 Msta-S ACS by only 5 calibers. The American XM907 is 185 clb longer than the existing M284 and M109 (ACS M19 of the main modifications).

Both self-propelled guns receive the most modern LMS developed by the two countries. Devices from their composition provide effective fire over the entire range of ranges, firing in different modes and programming guided projectiles. Simplifies preparation for firing at third-party target designation. A number of shooting preparation processes are automated.

The two considered self-propelled guns have obvious differences that can affect the fighting qualities. So, the Russian model is built on the chassis of a modern tank, and in the future it will receive a new platform. The American competitor, in turn, uses a modern version of the rather old M109 chassis. All this affects the mobility and mobility of the two self-propelled guns, and the XM1299 risks losing in such a comparison.

Components of the XM1299 complex. US Army graphics
The Russian "Coalition-SV" initially has an automatic loader providing a high rate of fire. The American XM1299 does not have such a unit, although its implementation is possible. At the same time, the rate of fire of the 2S35 will still be higher. This gives the Russian self-propelled gun obvious advantages, especially when combined with higher mobility.

In fact, the "Coalition-SV" will be able to quickly come into position, turn around, send a large number of shells to the target and go to a safe place. In an artillery duel, this difference in performance can be decisive.

However, a comparison of promising ammunition gives not so clear results. An experimental Russian projectile has already been sent at ranges of 70 and 80 km. The American XM1113 has only flown 65-70 so far. However, it is planned to improve it, and another guided munition with a range of at least 100 km is being developed.

If the United States is able to implement all its plans, and Russia does not create new shells with improved performance, then the XM1299 self-propelled gun will receive a decisive advantage. To combat it, you will have to involve not ACS or MLRS, but other fire weapons, up to combat aviationwhich has its drawbacks. 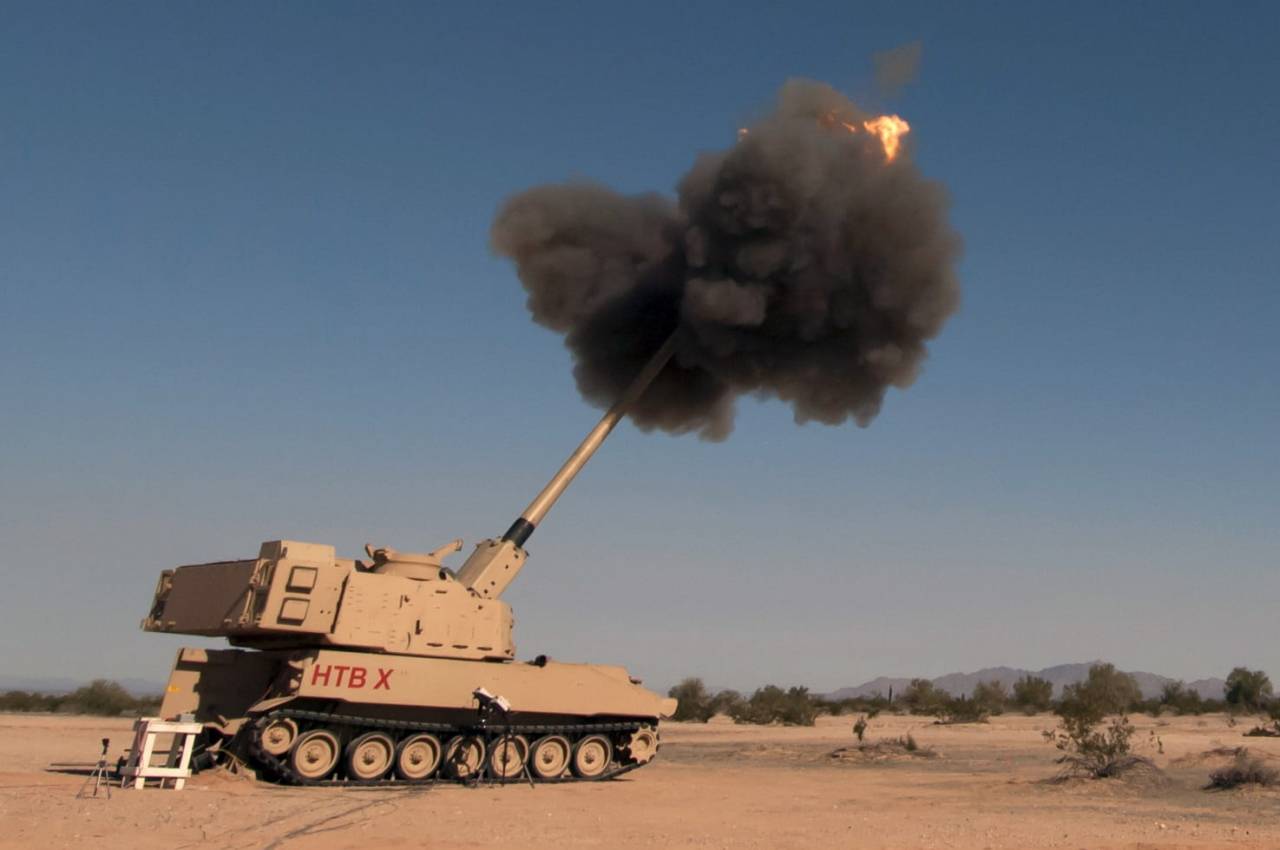 Long range test shot. US Army Photos
The difference in the current plans of the two armies looks interesting. Russian ACS 2S35 "Coalition-SV" has already passed most of the tests and brought to trial operation. No later than 2021-22 it is planned to begin deliveries of serial equipment to combat units. The American XM1299 is still undergoing tests and is not ready to be sent to the troops. The beginning of service is still referred to 2024, and the achievement of operational readiness is expected even later. Thus, there is every reason to believe that, at least for several years, the Russian army will become the world leader in the field of self-propelled artillery.

Requirements of the future

Russian and American projects for the development of promising self-propelled guns started at a long time interval, but similar requirements were imposed on them. However, the results of the two projects differ markedly for a variety of reasons. Some of these differences can be critical in real-world combat and determine the effectiveness and survivability of a combat vehicle.

With all the differences, two SPGs, 2S35 and XM1299, demonstrate the main ways of developing modern and promising self-propelled artillery. The armies of the leading countries consider it necessary to further improve guns and create new shells, due to which the range and accuracy of fire will increase. At the same time, the presence of two types of experimental equipment and their successful testing indicates the fundamental possibility of meeting such requirements. Thus, in the field of ACS, there has been a significant breakthrough, and the two leading countries will soon be able to take advantage of its results.