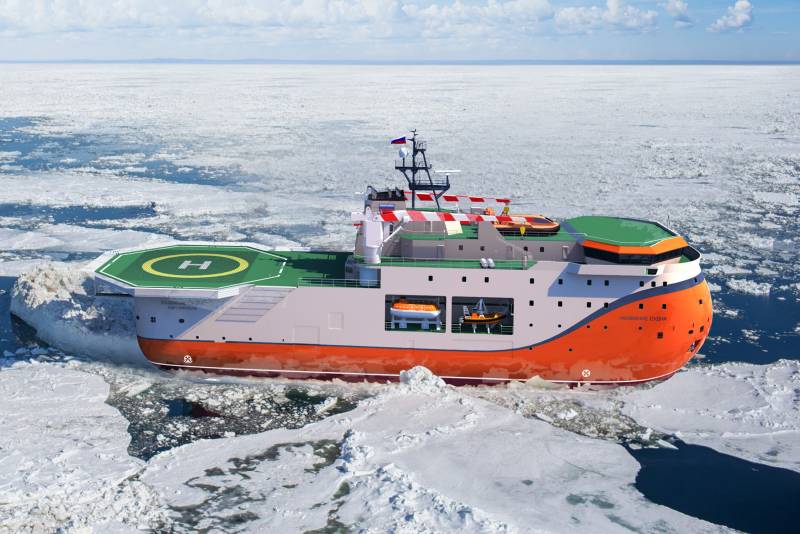 On December 18, at the Admiralteiskie Verfi shipyard (St. Petersburg), the launching ceremony of the North Pole ice-resistant self-propelled platform took place. The unique vessel, project 00903, is being built by the order of Roshydromet and will join the scientific fleet in the near future. With its help, new studies of the Arctic will be carried out, impossible or excessively difficult in the current conditions.

In the interests of science

In 1937-2015. our country has deployed more than 40 drifting research stations "North Pole", providing a comprehensive study of the Arctic region. In recent years, such stations have not been built due to climate change and increased risks. Nevertheless, a way was found to conduct research without threats to polar explorers and materiel.

In 2015-16. Design Bureau Vympel and the Admiralteiskie Verfi shipyard have begun working on the appearance of a promising research platform vessel for a research station. In 2018, a preliminary design was ready, which made it possible to transfer the construction program to a new stage. 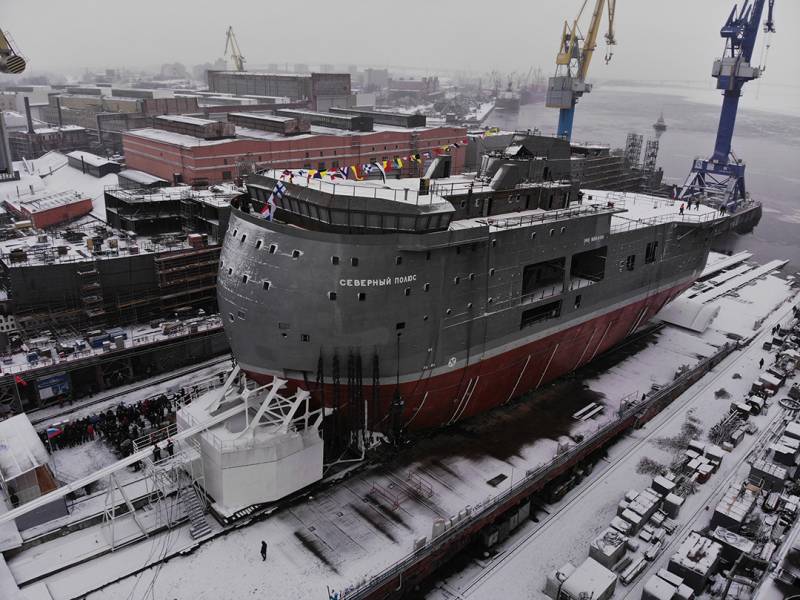 "North Pole" on the slip, December 18, 2020
On April 19, 2018, the Federal Service for Hydrometeorology and Environmental Monitoring (Roshydromet) and Admiralteyskie Verfi signed a contract for the development of a technical design for an ice-resistant self-propelled platform “00903” with the subsequent construction of such a vessel. The cost of the work was estimated at almost 7 billion rubles. Delivery of the finished platform was expected by the end of 2020.

The construction of the vessel was launched at the end of 2018.On April 10, 2019, the groundbreaking ceremony took place. The platform received the name "North Pole". In the spring of this year, it became known that the customer had adjusted his requirements. The need to finalize the project and the implementation of such changes led to an increase in the cost of the project by 2-2,5 billion rubles. and to the shift in the delivery date of the platform at the end of 2022. 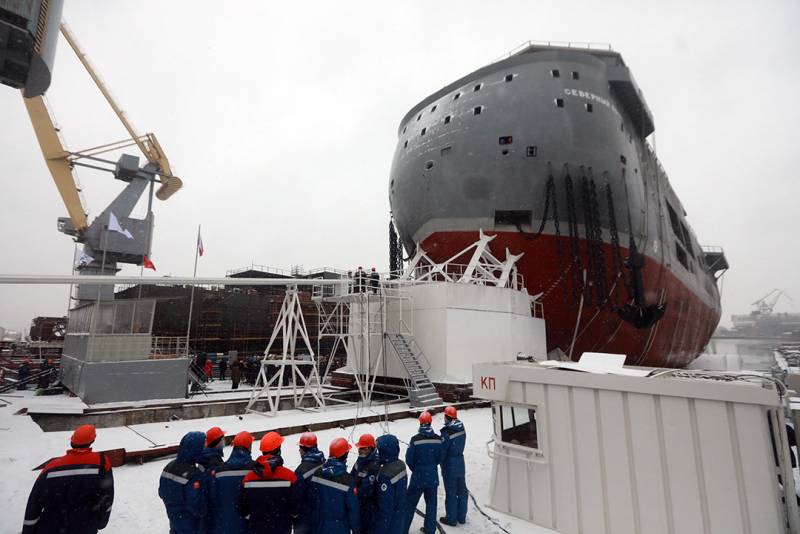 The construction of the research vessel continued and has now entered a new stage. On December 18, the hull was launched. Now the North Pole is located at the quay wall, where the completion is under way. This work will be completed no earlier than next year, and in 2022 it is planned to complete all the necessary tests.

Specific requirements were imposed on the 00903 project, which led to the formation of an unusual appearance of the platform. So, the vessel should be able to overcome ice, as well as a long drift along with ice floes at any time of the year. There are high requirements for autonomy. In addition, a large variety of scientific equipment must be accommodated on board the platform. In fact, it is planned to build a self-propelled research center with broad capabilities. 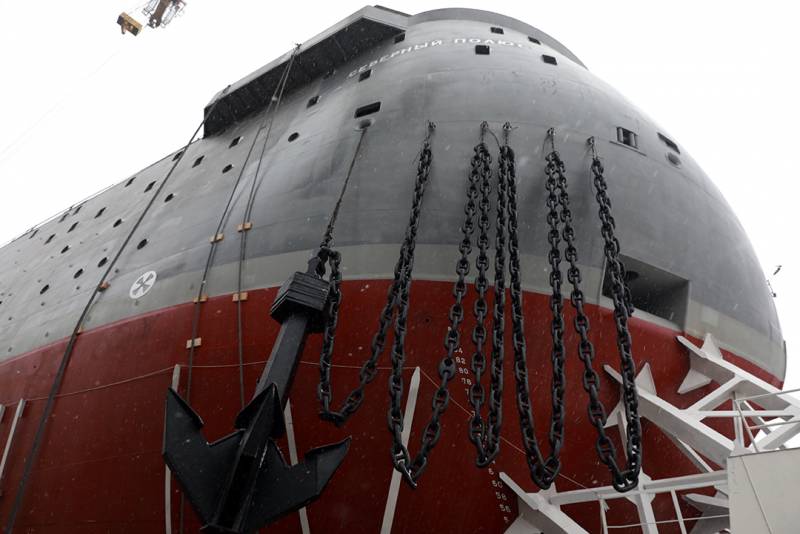 According to the project, the "North Pole" has a length of 83,1 m, a width of 22,5 m and a displacement of approx. 10,4 thousand tons Due to the special conditions of service, the vessel received a hull of an original design. Its lower part is egg-shaped, which prevents ice squeezing and destruction. High sides are provided; there is no pronounced large superstructure. The platform as a whole has an Arc5 ice class - independent navigation in first-year ice up to 1 m thick. At the same time, the hull corresponds to the Arc8 class, which allows it to independently operate in ice up to 2-3 m thick.

The platform will receive a non-nuclear power plant with a capacity of 4200 kW. Movement will be provided by two rudder-propellers in the stern and a bow thruster. The maximum speed will exceed 10 knots. Movement in ice is possible both behind the icebreaker and independently. Due to the large supply of fuel on board and in connection with the specific operating modes of the power plant, the autonomy for fuel has been brought to 2 years. 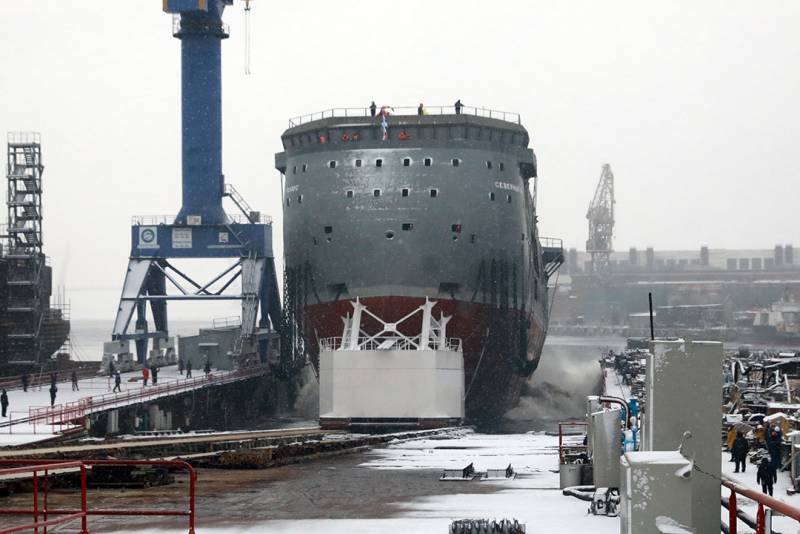 Own crew of the vessel - 14 people. Another 34 people will make up the research team. They will be able to operate as a polar station for a long time. Safe and comfortable living and working conditions will be ensured at air temperatures down to -50 ° C.

Together with a promising ice-resistant self-propelled platform, Roshydromet will receive a number of new opportunities for conducting research in harsh Arctic conditions. In its main role, the North Pole will become a replacement for the drifting stations of the same name on ice floes, which has significant advantages over them. 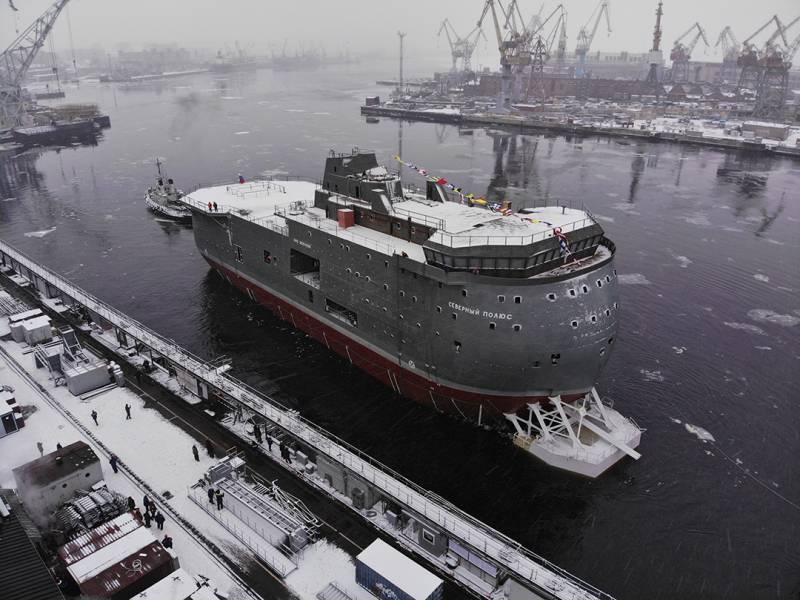 The standard scenario for using a self-propelled platform is quite interesting. The vessel, independently or with the help of an icebreaker, will have to go to a given point and go to drift. Without damage to the structure, it will be able to freeze into the ice and continue sailing with it. This drift can last up to two years, after which the platform will turn on the engines again and go to base. If necessary, the ship will be able to receive or send helicopters with cargo and passengers.

A self-propelled platform as a base for a research station has obvious advantages over an ice floe. It is safe, predictable and manageable. In addition, the ship can accommodate more scientific equipment with greater convenience and efficiency, as well as ensure its power supply and full operation. Finally, it is easier to organize the proper comfort for the crew and scientists. 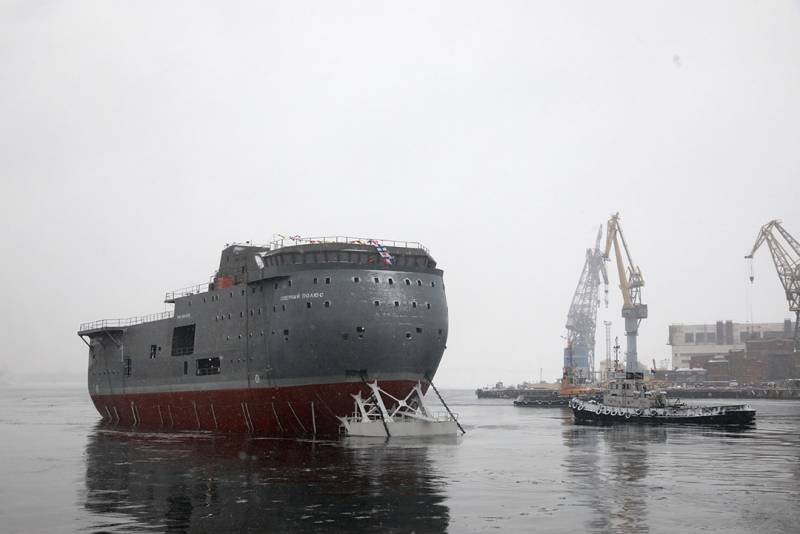 The North Pole is a unique vessel. A specialized platform for organizing drifting stations is being created for the first time not only in our country, but also in the world. This novelty is directly related to a number of advantages. At the same time, it leads to certain risks and difficulties. Thus, the final appearance of the platform was not immediately formed, and its adjustments led to a shift in terms and an increase in the cost of construction.

A few days ago, the ice-resistant self-propelled platform of the new project was launched and taken to the wall for completion. In the near future, "Admiralty Shipyards" will install all the remaining equipment on the ship, incl. scientific purpose, and then take it to sea trials. These activities are planned to be completed by the end of 2022, after which the finished North Pole will be handed over to Roshydromet.

Already in 2023, the new research vessel can set off on its first expedition. It is very likely that scientists will use its main capabilities and resume the practice of deploying drifting stations. In the distant future, one should expect the resumption of long-term and regular work of such scientific objects, which is impossible under current conditions. 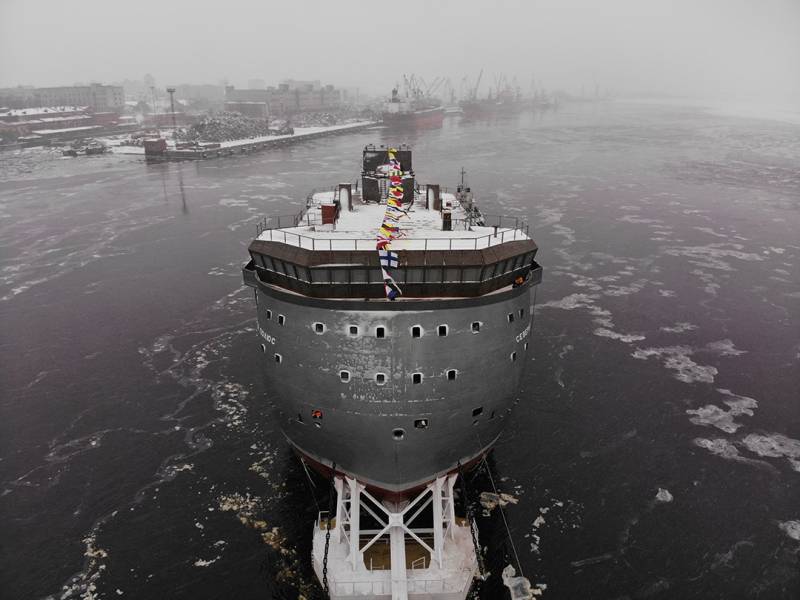 It is obvious that the platform of project 00903 is capable not only of drifting with ice. With the help of the "North Pole" it will be possible to organize any other scientific expeditions with the aim of a comprehensive study of the Arctic. Probably, special attention will be paid to research ensuring the economic development of the region. In addition, the results of scientific work can be useful for the military department, which is responsible for protecting the northern borders.

Thus, already now, two years before the expected delivery, it is clear that the new research platform vessel will not be idle. Roshydromet, independently and in cooperation with other departments, will conduct a lot of expeditions of various kinds. The North Pole under construction will be an excellent addition to the existing research fleet and will seriously expand its capabilities.