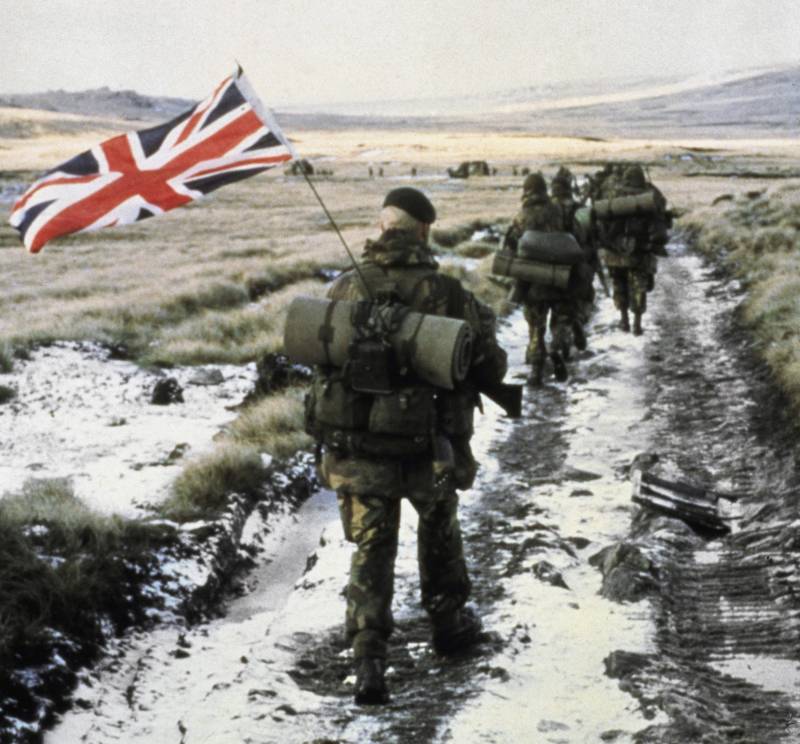 "The Malvins were, are and will be Argentine!"

The Falklands or, as they are called in Argentina, the Malvinas Islands since 1833, formally under the English administration. It would seem, on what basis does Buenos Aires claim an archipelago, even if it is located only 500 kilometers from the mainland of the country?

The fact is that after the liberation from the Spanish crown, the Falklands were Argentine for four years from 1829. By "inheritance" and based on the UN's 1960 decolonization demands, Argentina could well have hoped for the return of the Malvinas Islands to its own jurisdiction.

British troops land on the islands of discord. Source: thehistorypress.co.uk
There was another reason for Argentina's territorial claims to Great Britain. Since 1976, the junta has come to power in the South American country, proclaiming a very peculiar economic course. The central bank deliberately overvalued the national currency, hoping for a quick technological modernization of the country. The calculation was simple - foreign investors and corporations import technology into Argentina using the favorable exchange rate of the peso to the dollar.

However, economic geniuses did not take into account the practical attitude of the country's citizens. When the salary of an ordinary engineer in Buenos Aires reached 6 thousand dollars, and the price level was a record for the continent, the population preferred to spend money abroad. People actively exported the national treasure, exchanging it for imported rest and goods.

The worst thing in this situation was agriculture, suffocating from imports and the unfavorable national exchange rate. All this was superimposed on the authoritarianism of the ruling military junta, which suppressed any dissent in the country. In Argentina, they still cannot find out the fate of more than 30 thousand people who disappeared without a trace during the years of military rule. 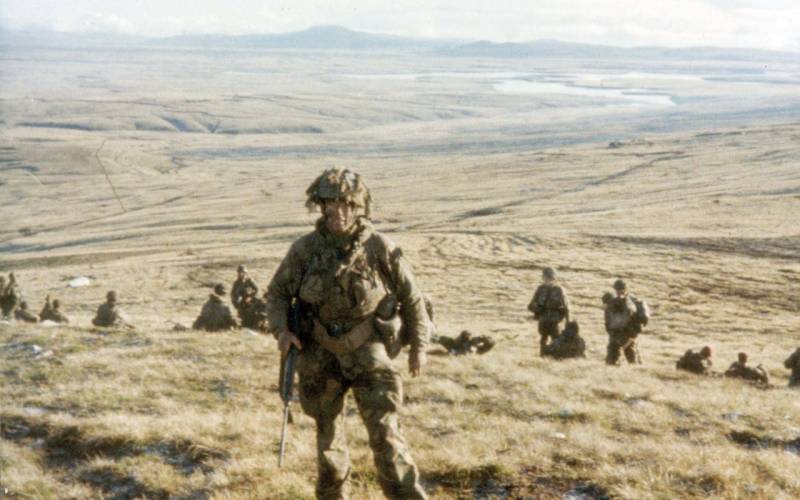 Source: newstatesman.com
In early 1982, dissatisfied Argentines took to the streets and demanded the resignation of the government of General Galtieri.

What will help the unpopular leader to stay in power in this situation?

In Buenos Aires, nothing better was invented than to wage a small victorious war against a country that is one of the founders of NATO. And even with a serious nuclear weapons.

В history this suicidal adventure came under the name of the 1982 Falklands War.

The calculation of the Argentine military strategists was simple - at the beginning of the 80s, the economic situation in England was not in the best way. It was assumed that the islands on the other side of the world, the government of Margaret Thatcher would not care.

After waiting for some time, the main forces (numbering more than 2,5 thousand people) landed on the islands on April 2 and declared the archipelago a sovereign part of Argentina.

By that time, there were up to 1,8 thousand English-speaking inhabitants on the islands and a small garrison of the Marine Corps was stationed there, which surrendered almost without a fight to the many times superior enemy forces.

Already on April 3, General Galtieri was applauded by the public, which just a few days ago demanded the resignation of the military junta. Still, more than a century of national pain is finally gone - the Malvinas Islands returned to Argentina. And now the once unpopular government can rest on its laurels and continue clumsy economic experiments.

On the day of Argentine national triumph, the first bell rang - the UN Security Council adopted Resolution 3 on April 502, demanding the withdrawal of the occupying Argentine troops from the islands.

It is noteworthy that the Resolution was not approved unanimously - the odious Colonel Noriega from Panama was "against". Only four countries abstained, including the USSR.

The Soviet Union actively used the situation around the Falklands in its own interests.

First, Buenos Aires came under sanctions (like Moscow because of Afghanistan), and in fact the USSR became the only buyer of local grain and meat. Yes, there were times when our country bought grain from the other side of the world.

Second, the impending threat from Britain was an excellent reason for the Union to strengthen its anti-imperialist positions in the world. However, the assistance of the Soviet Union to Argentina was predominantly moral, and it consisted of statements about an exclusively peaceful solution to the issue. 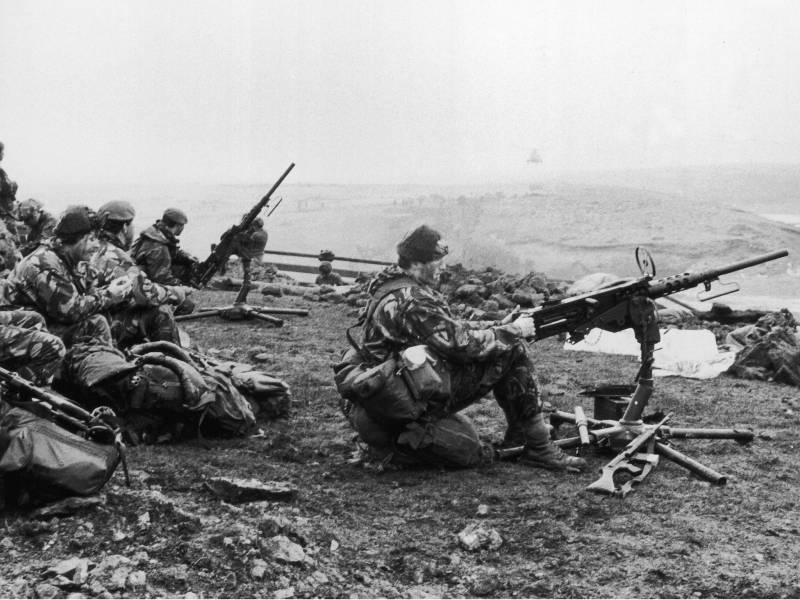 One of the most well-equipped NATO armies, supported by the United States, fought against the weak forces of Argentina. Source: independent.co.uk
The concern of the Soviet leadership about the military resolution of the conflict and the involvement of the United States in this was understandable. Looking ahead, it is worth noting that one of the domestic radio broadcasts on May 1, 1982 contained a statement about the upcoming meeting of NATO defense ministers, at which British assistance was to be discussed. On the air you could hear:

"NATO has assumed the role of defender of the neo-colonialists and is trying to expand the sphere of its aggressive activity outside the North Atlantic alliance."

This approach logically fit into the previous Soviet accusations of the United States of intent to use the Falkland Islands as a base for the creation of the South Atlantic Treaty Organization or SATO.

By combining NATO and "CATO", the Americans had to take control of the entire Atlantic. The Soviet Union has repeatedly stated that

"The penetration of the aggressive NATO bloc into the South Atlantic is fraught with serious consequences for the whole world."

For the Iron Lady, the liberation of the Falkland Islands, as well as for General Leopold Galtieri, was also an excellent chance for

"Small victorious war".
And for most Britons, the war, in general, opened their eyes to the remote territories of the once great British Empire. It turns out that up to 60% of British residents by April 1982 did not know about the existence of the Falkland Islands.

A British naval armada consisting of two aircraft carriers - Hermes and Invincible with Harrier vertical take-off planes with a total strength of about 28 thousand people - was urgently sent to the conflict zone. In the Atlantic, two aircraft carriers were joined by destroyers, torpedo boats, frigates, four submarines, and the pride of a civilian fleet - ship Queen Elizabeth II.

The date of the appearance of this powerful flotilla in the South Atlantic in the Falklands zone depended only on its speed and distance (8 thousand nautical miles), which had to be overcome.

While the Argentine contingent in the Falklands was awaiting the arrival of British forces, the Americans tried with all their might to resolve the issue peacefully. The point is in the treaties that Washington was tied with both London and Buenos Aires. The Americans were friends with the British in NATO, and with the Argentines - under the Inter-American Treaty on Mutual Assistance or the Rio Pact.

It is not hard to guess who the United States chose in this story. On April 30, 1982, this country officially announced its support for Great Britain. 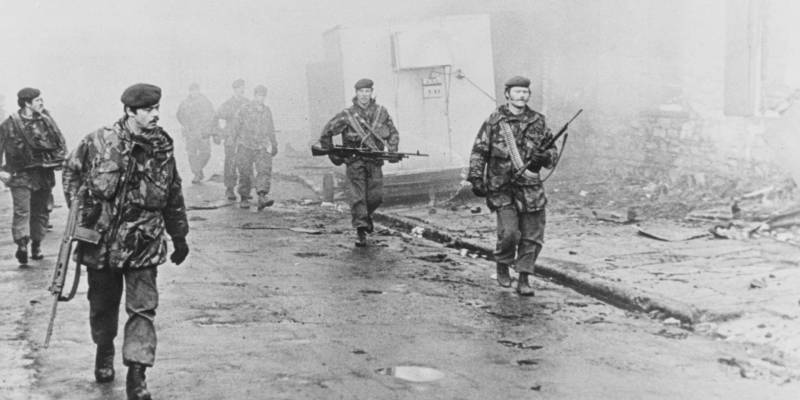 British cleanup of residential areas of the islands. Source: nam.ac.uk
When the British began hostilities in the Falklands on May 21, they were already using US satellite intelligence data, as well as a naval base on Ascension Island for basing aviation.

The Argentine military contingent, which landed on the islands in early April, was hastily prepared and consisted of inexperienced soldiers and officers. Airstrikes by the Argentine Air Force were carried out from planes taking off from continental airports and covering about half a thousand kilometers before attacking the British. Half of the bombs fired from Argentine aircraft failed to explode.

During the conflict, the Argentine Air Force used aerial bombs manufactured in the United States "about 30 years ago" and delivered to Argentina several years before the conflict.

The Argentine Navy, neither in terms of its characteristics nor in quantity, was able to provide serious resistance to the British fleet and aviation.

So the British sank with impunity the outdated Argentine cruiser General Belgrano with 365 naval personnel on board outside the "exclusive zone" of conflict. After the tragedy, Leopold Galtieri withdrew from the waters of Falkland all the warships of Argentina. 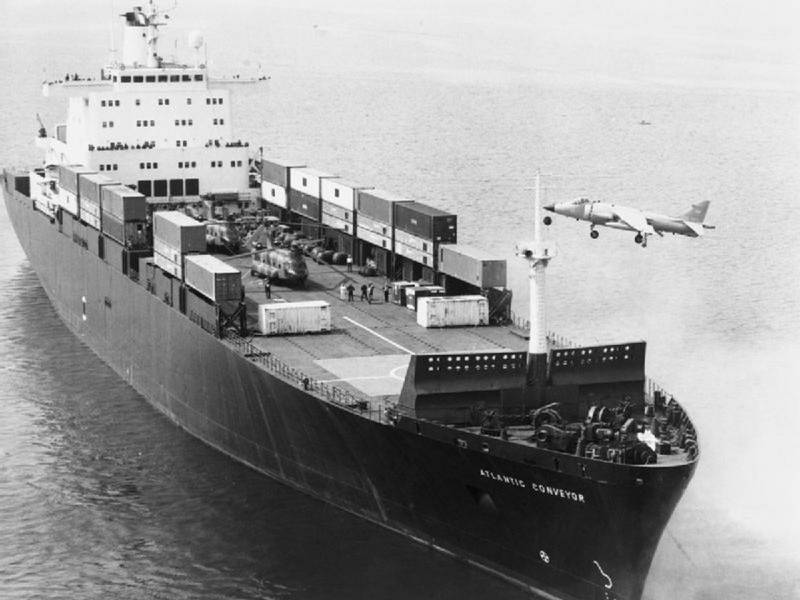 British carrier-based VTOL fighter-bomber "Sea Harrier" above the deck of the container ship "Atlantic Conveyor" requisitioned by the military. Military transport helicopters "Chinook" are also visible on the deck of the ship. Source: warspot.ru
The Argentines had little to respond to blows. Among the meager arsenal are the French AM39 Exocet anti-ship cruise missiles, which sank the British destroyer Sheffield and the container ship Atlantic Conveyor. The latter was not a peaceful ship and was carrying combat British aircraft to the conflict zone.

Two frigates Ardent and Antelope, the destroyer Coventry and two landing ships went to the bottom of the British from enemy aircraft. The Argentine military found an unexpected use for the C-130 transport aircraft. It was used as a bomber, dropping bombs from the rear of the cargo bay onto ships in the Royal Navy.

By June 14, 1982, London had regained its jurisdiction over the islands.

And on the continental part of Argentina, unrest began, which led to a change of power and a severe devaluation of the national currency.

And Margather Thatcher was able to rally a country torn apart by contradictions.

Ctrl Enter
Noticed oshЫbku Highlight text and press. Ctrl + Enter
We are
The Undiscovered Secrets of the Falklands WarFalkland or Malvina? The Anglo-Argentine War began thirty-three years ago.
Military Reviewin Yandex News
Military Reviewin Google News
342 comments
Information
Dear reader, to leave comments on the publication, you must sign in.