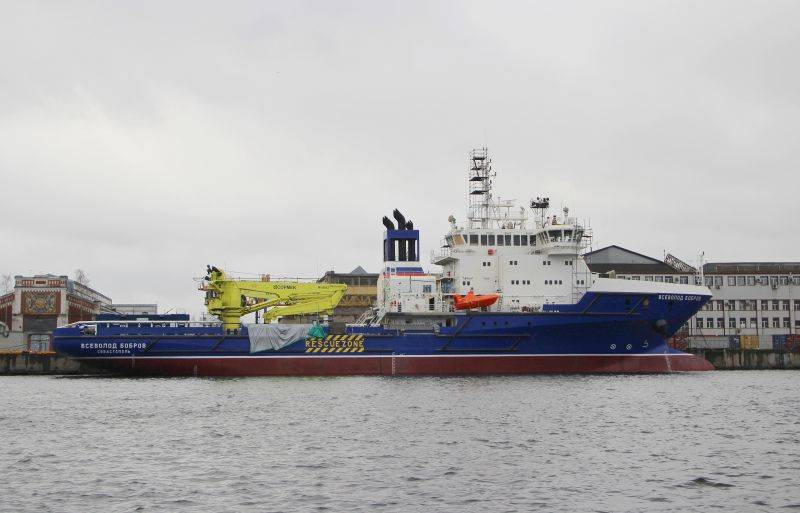 Project 23120 support vessel Vsevolod Bobrov, built at Severnaya Verf, will be delivered to the customer in the first half of 2021. This was reported by the press service of the Ministry of Defense with reference to a statement by Deputy Defense Minister Alexei Krivoruchko.


The Deputy Minister visited the Severnaya Verf shipyard, where he got acquainted, among other things, with the progress of work on the first serial logistic support vessel Vsevolod Bobrov of project 23120. According to Krivoruchko, the enterprise complies with all the terms of state tests on acceptance orders, work is underway in accordance with the established schedules. The handover of the vessel is expected in the first half of next year.

As previously reported in the press service of Severnaya Verf, Vsevolod Bobrov was supposed to start sea trials earlier this month.

"Vsevolod Bobrov" is the second ice-class logistics support vessel. Laid down in 2013 and launched in 2016. This is the second ship of such a project being built at Severnaya Verf, after the lead Elbrus, and the first serial.

The vessel is designed for the carriage of goods, towing, carrying out hydrographic research, providing assistance to ships in distress. The dynamic positioning system allows you to keep the vessel at a given point in all weather conditions. The vessel has two electro-hydraulic cranes with a lifting capacity of 50 tons, towing winches with a pulling force of 120 and 25 tons, there is a cargo deck with an area of ​​more than 700 sq. m.

Ctrl Enter
Noticed oshЫbku Highlight text and press. Ctrl + Enter
We are
Logistics support vessel Vsevolod Bobrov is preparing for the introduction of the crewSevernaya Verf Shipyard will launch the third serial corvette of the 20380 Stable project in May
Military Reviewin Yandex News
Military Reviewin Google News
14 comments
Information
Dear reader, to leave comments on the publication, you must sign in.