The language of heraldry 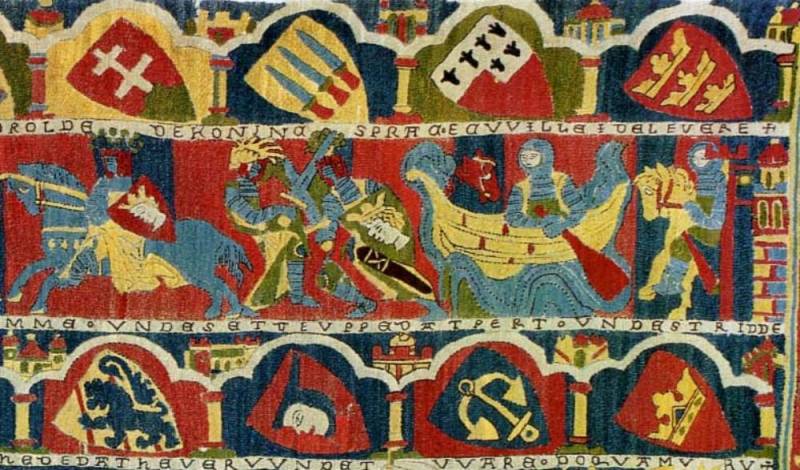 Carpet with knights and coats of arms from the Wienhausen Abbey monastery. Celle / Celle. Germany. 1330 BC

Each sought to be new
And go out into battle in the purest way.
The tower shines like gold on the shield,
There is a lion, there is a leopard and a fish in a battle emblem.
Peacock's tail serves as an ornament.
And someone decorated the helmet with a flower in consolation ...
There the rider's black mourning crowns the flag,
The other has a white, blue and green mark.
The third surco is crimson, glittering with lilies,
And someone, seeing this, trembles inwardly ...
(Poem of the XIII century "Galeran", translated by the author)

Coats of arms and heraldry. Like much of the knightly innovation, the basic rules of heraldry were developed in France. That is why all emblems, signs and symbols were named in Old French and Medieval Latin.

How, for example, were the sides of the shield designated? Dexter (from Latin dextra - "right") - the right side, which was facing the knight's right hand, and sinister (from Latin sinister - "left") - respectively to the left. The method of dividing the field of the shield into parts was called division, and the drawings on it were ordinaries.

And, since initially the coat of arms was on the knight's shield, then the coat of arms itself was determined by its shape: the Italian shield was oval, the Norman - in the form of an "iron", the French - had the form of a rectangle with a rounding or a sharp protrusion below, the Germanic - tarch (the shield is more later) had cutouts. Diamond-shaped shields were “women's shields” and were traditionally used for coats of arms for maidens and widows. Moreover, in the first case, the coat of arms of the father was transferred to this shield, and in the second - of the husband. Oval shields most often belonged to the Italian clergy. 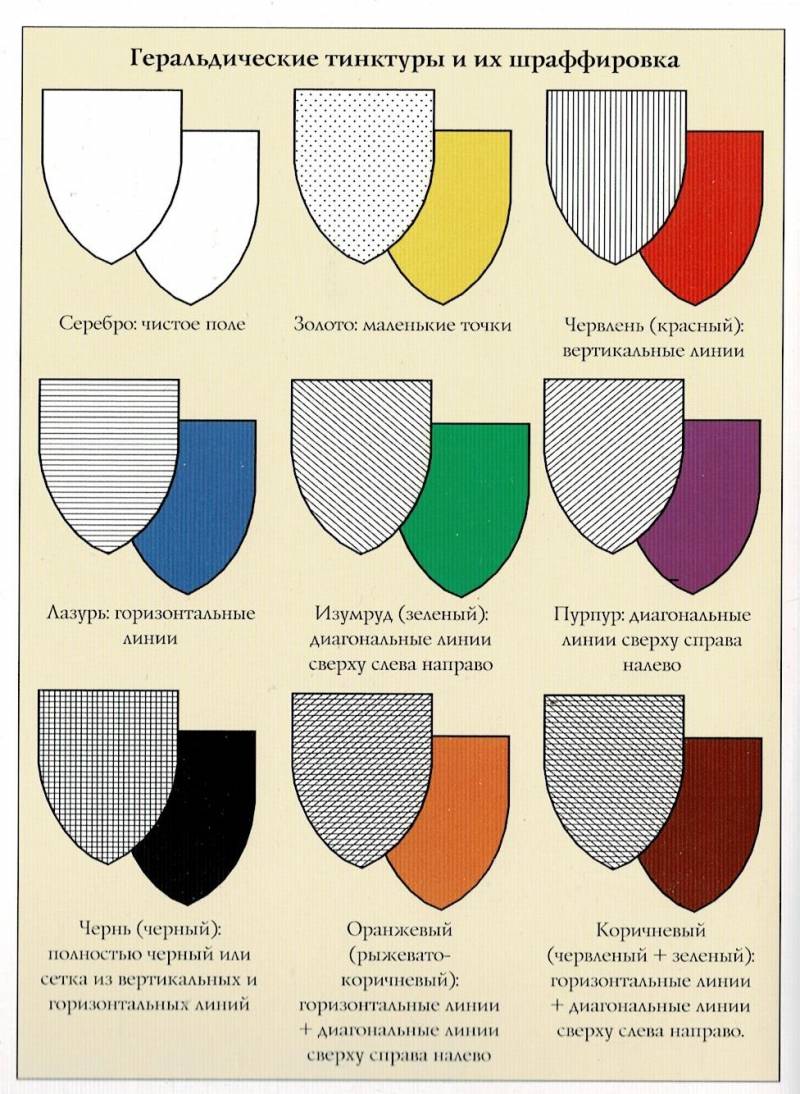 Heraldic colors and their display in black and white.
Illustration from Stephen Slater's book “Heraldry. Illustrated Encyclopedia ", Eksmo, 2006 Pp. 70
The main provisions of heraldry about colors are as follows: yellow and white are used to designate "metals" - gold (op) and silver (argent). All other colors in heraldry are "enamels" or "enamels": scarlet (gulz or worm), black - black (mourning or saber), green (vert), blue (azure), purple (purple). Moreover, the latter on the coats of arms could well differ and very much, that is, it could be lilac, and dark blue, and purple.

Moreover, each color meant something. Scarlet - "the color of blood", of course, courage, willingness to shed it in battle for his feudal lord or "lady of the heart." Azure - served to demonstrate greatness and nobility (hence the "blue blood"). Green - symbolized hope and, of course, abundance so longed for in the Middle Ages. Purple - signified dignity. Well, the rabble is, of course, sadness, humility before fate and education, rare at that time. Pure silver has always been a symbol of spiritual purity and physical innocence. And gold is wealth, justice and generosity (and besides, also the Kingdom of Heaven and the hope to get there).

It is interesting that in addition to colors or enamels, there are also so-called "heraldic furs" in heraldry. True, there are only two of them: ermine fur and squirrel. But they could be portrayed in different ways.

So, ermine fur on the coat of arms could have the appearance of black tails (as on a royal mantle) on a silver field (three dots next to it depicted suture material with which the tails were sewn onto the robe).

And the squirrel - silver and azure tongues (which were also called "caps") or have an incomprehensible shape of the handle of a crutch or a spade. In this case, it was called crutch-like. Moreover, all the squirrel furs on the emblems could be positioned both upward and downward. Fur in this case was called "anti-squirrel".

It was forbidden to overturn ermine fur by the rules. But then its color could be changed: say, black to white. Such fur was called “anti-mountain”. 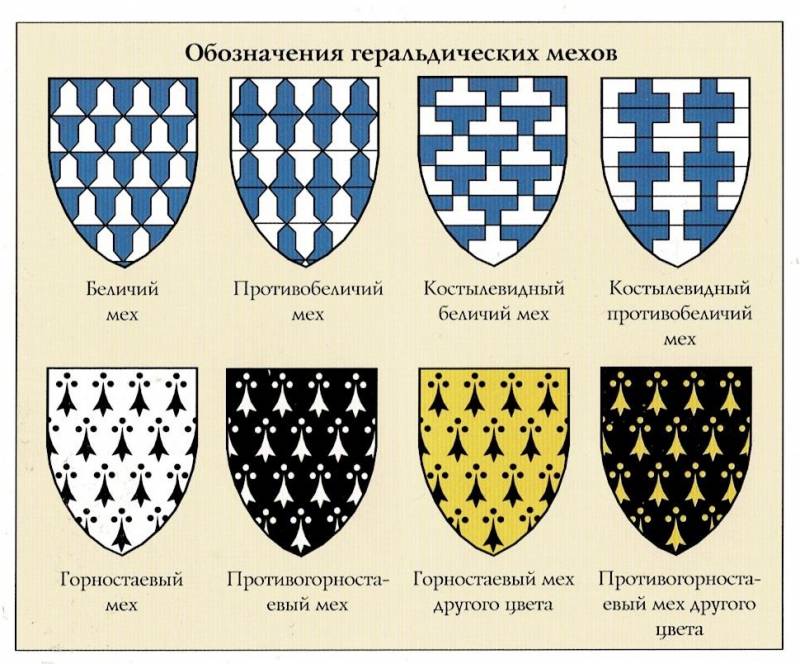 And here is how all these "tricks" with furs were displayed on the emblems.
Illustration from Stephen Slater's book “Heraldry. Illustrated Encyclopedia ", Eksmo, 2006 Pp. 71
One of the most important heraldic rules was this: when composing a coat of arms, it was impossible to put metal on metal and enamel on enamel. Fur could be applied not only to enamel, but also to metal. It was also allowed to apply enamel to the enamel, but only if it covered some details of the whole figure. For example, a golden lion located in an azure field could well have a scarlet tongue and claws, although in this case there will be an overlay of enamel on the enamel. 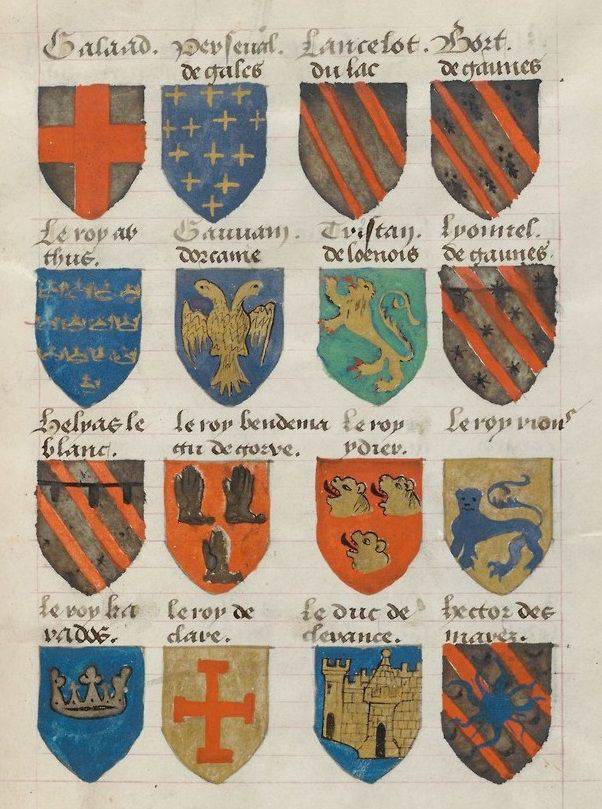 A 1470 manuscript depicting medieval coats of arms from the Houghton Library at Harvard University. USA

Well, the colors also had to be chosen wisely. A red lion on a white field looks good. But a blue lion on black would be almost invisible, as well as a black eagle on blue or dark purple.

However, in heraldry, as elsewhere, there were no rules without exceptions. Indeed, many coats of arms were not drawn up, but complained, and very often right on the battlefield or in such an environment when there was no time to consult with the herald. Also, changes in existing emblems could be quickly made. For example, the right edge of the coat of arms of a knight who showed cowardice or cowardice was broken off. Well, and a warrior who fell so low that he beat a prisoner could have shortened the shield from below. 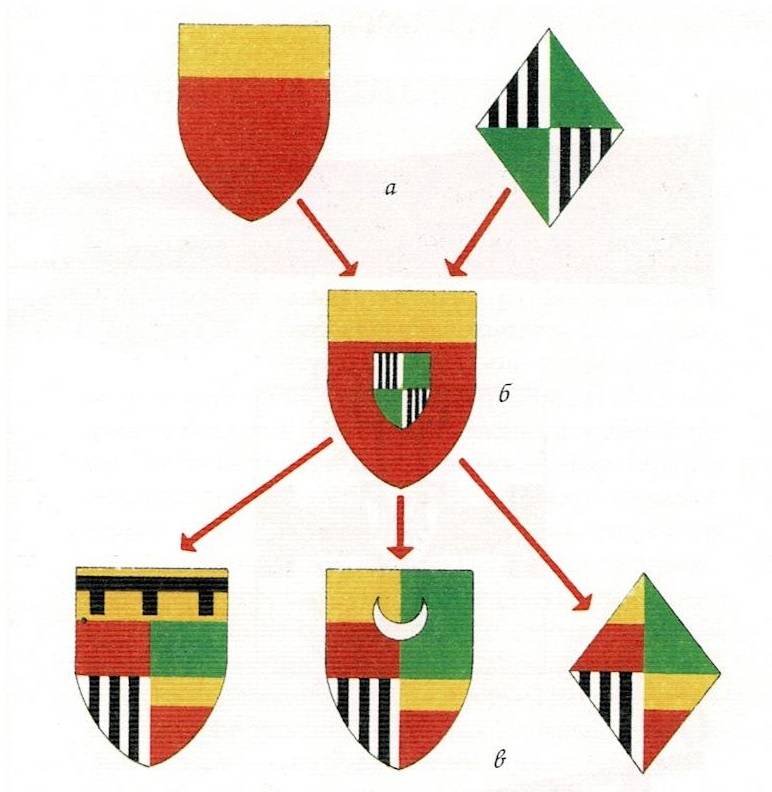 Marriage and coat of arms.
Illustration from the book of V.O. Shpakovsky "Knights. Locks. Weapon". ROSME-PRESS, 2005. Page 81
Before marriage, the girl possessed the coat of arms of her father. A ribbon - "sweetheart's bow" was attached to her diamond-shaped shield. As soon as she got married, her diamond shield took on a "masculine" shape. The husband's coat of arms was on the dexter of her shield. The old, "girlish" heraldic elements were preserved on the head of her new coat of arms. 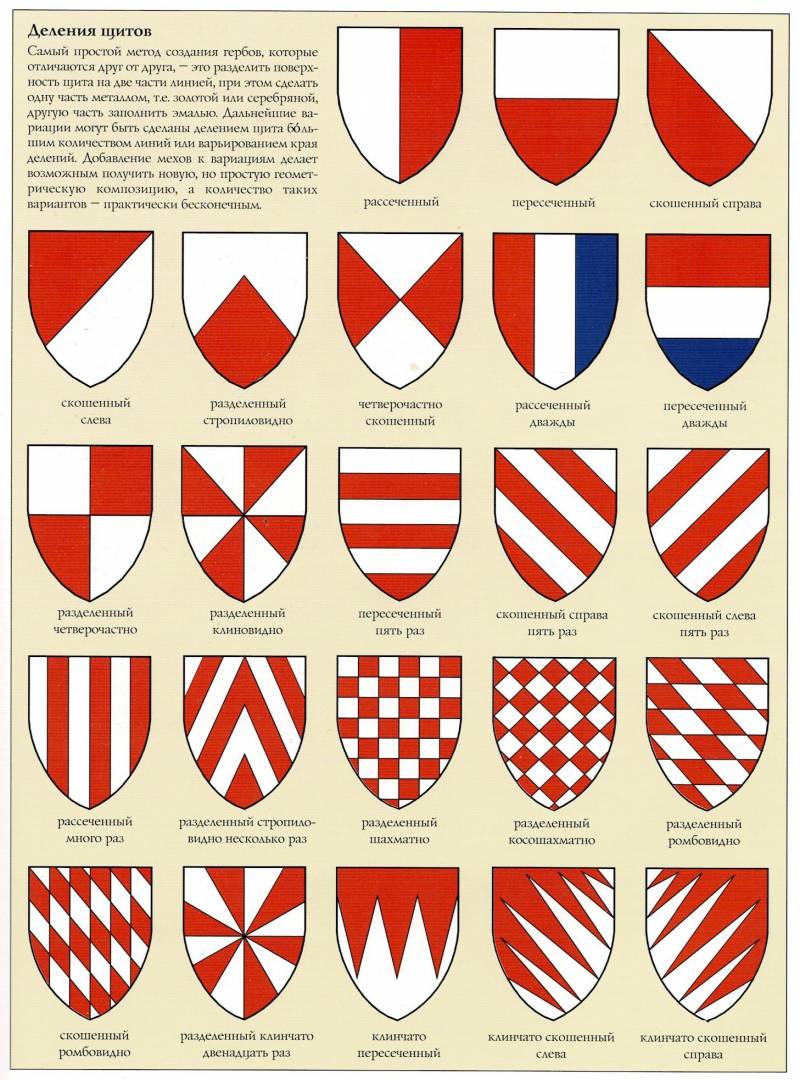 And this is how the shield could be divided into parts ...
Illustration from Stephen Slater's book “Heraldry. Illustrated Encyclopedia ", Eksmo, 2006 Pp. 73
Well, what figures on the coat of arms could describe the high moral feelings of its owner: strength, wealth, loyalty to duty? It turns out to be the simplest. These are geometric patterns on the shield, which are commonly called "honorific". They are considered as such, since they occupy a special place in heraldry, and in blazoning (as the description of the coat of arms is called) they are always called immediately after the shield itself. 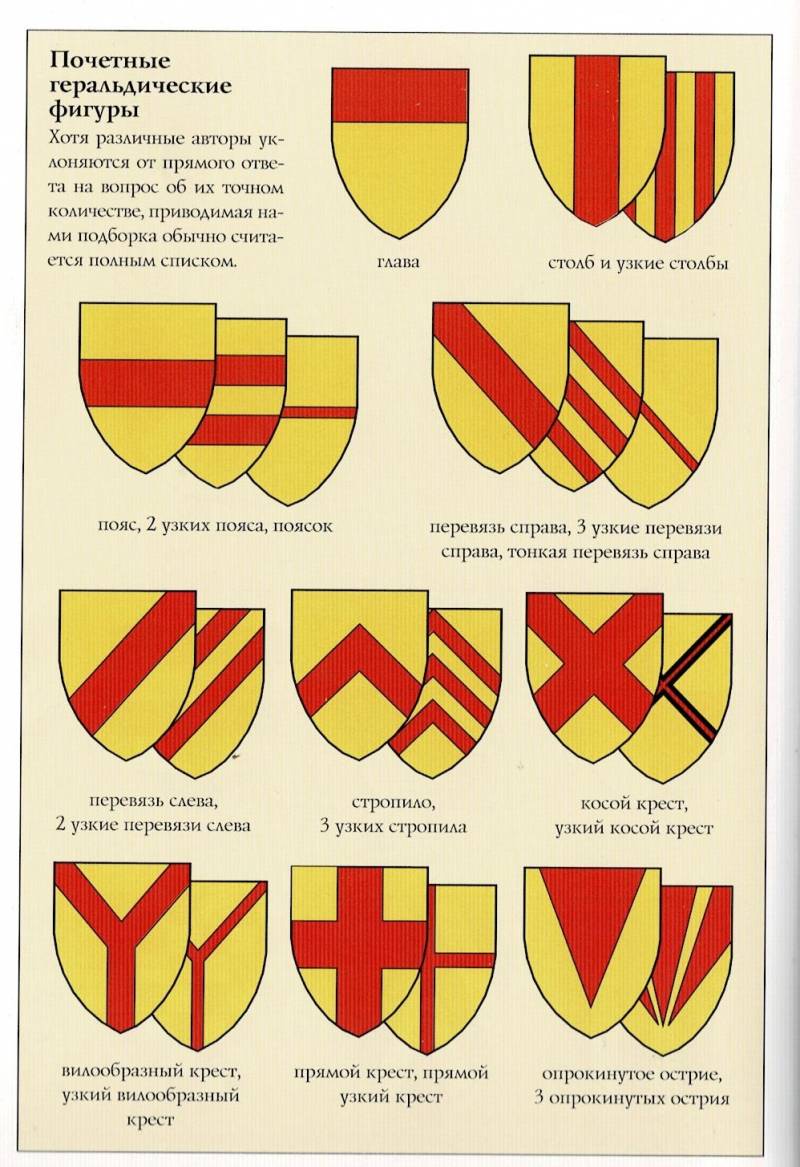 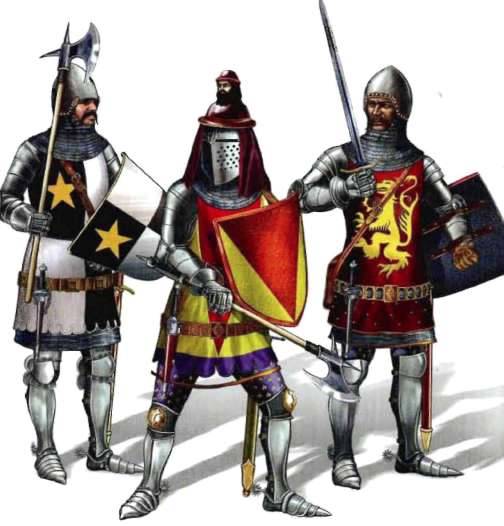 English knights of the era of the Hundred Years War and the Battle of Agincourt. At the central one, on the golden shield, there is just an image of the "overturned edge" and, as you can see, this is quite enough for him.
Figure: T.V. Kanivets
It is interesting that many honorary heraldic figures can, so to speak, "shrink" and appear on the shield in two or three. The same straight cross can be a "narrow straight cross", and instead of one rafter or pillar, the emblem can have three narrow rafters or three narrow pillars. 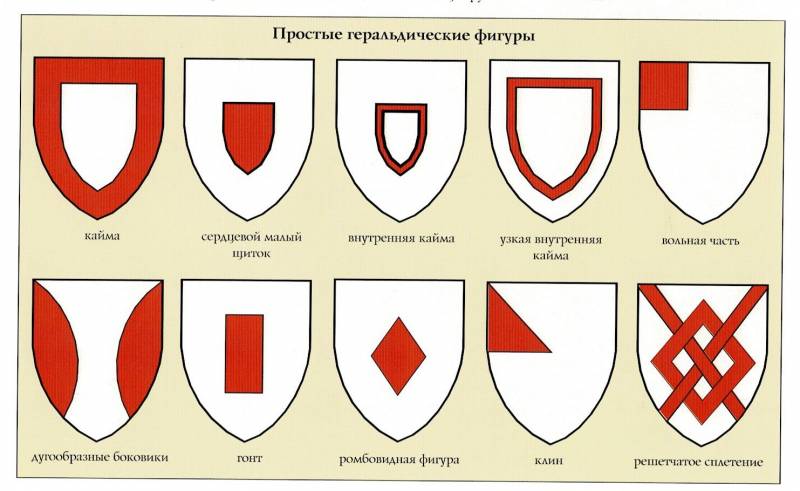 "Simple Shapes".
Illustration from Stephen Slater's book “Heraldry. Illustrated Encyclopedia ", Eksmo, 2006 Pp. 76
In addition to "honorable" ones, "simple heraldic figures" are also known. Moreover, all of them are also related to the shape and design of the shield. For example, "border". Well, it is clear how this figure appeared: a kind of reinforcement was stuffed on the shield along the edge, most likely made of metal - hence the border. The inner border is between the edge of the shield and its middle. The French heralds gave it the name "fake shield" ("through shield"). And there is just an inner border, but there is a narrow one. The lattice-weave shield was called "lattice-covered".

An interesting "free part" - a square in the upper right corner. Usually some kind of image was placed in it, but at the same time it served to indicate family ties. Shingle is a vertically oriented bar. Usually one shingle is never depicted. They are scattered over the field of the shield, and then the shield is described as "strewn with shingles." There is also such a simple figure as the "circle". Mugs, like shingles, for example, come in both colors and metals. There are circles - "coins" or "bisantes" (in honor of the Byzantine gold coin). But if the circle is red, then it is "guz" ("tartlet"), blue - "edge". If the circle is blue, and wavy lines are drawn in it, then this is a "fountain". 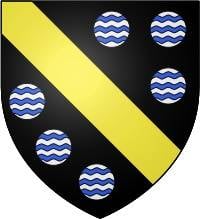 The coat of arms of the Stourton family: "Shield of sabers, golden sling on the right between six fountains, arranged in three."
Colorized illustration from Stephen Slater's book Heraldry. Illustrated Encyclopedia ", Eksmo, 2006 Pp. 77
The coat of arms of the English Stourton family is interesting, or rather, his история... In the distant past, their family owned a land on which there were three springs that formed the source of the Stourt River, and three springs were nearby, but beyond its border. So the family coat of arms began to describe its land ownership very well. 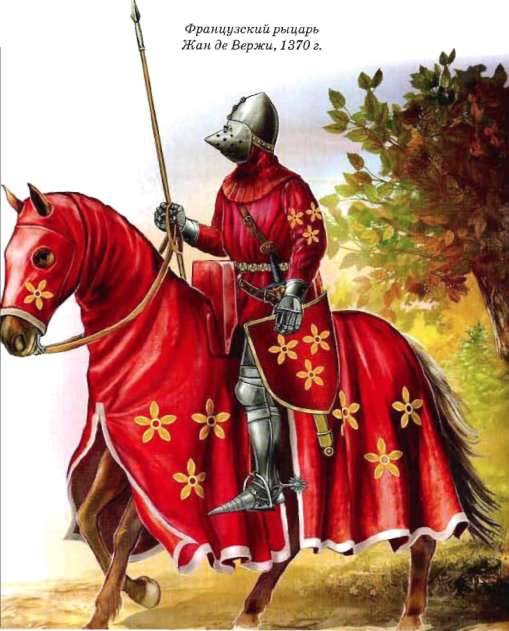 Very simple coat of arms of the de Vergy family with the image of three five-leafed leaves.
Figure: T.V. Kanivets

Author:
Vyacheslav Shpakovsky
Articles from this series:
Coats of arms: form and content
Where did the coats of arms and the science about them come from?