Deliveries of ships and vessels for the Navy in 2020 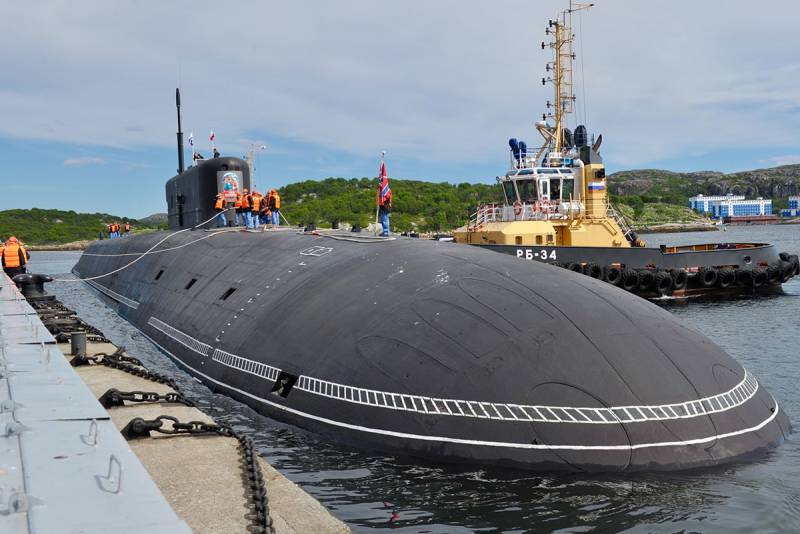 SSBN "Prince Vladimir" at the Gadzhievo base, July 2020

The program of modernization of the naval fleet... This year, the shipbuilding industry has delivered several dozen ships and vessels of various classes, having fulfilled most of the established plans. In addition, measures are being taken to solve urgent problems, a technological reserve for the future is being created and new ships are being laid.

On December 11, the naval command revealed the preliminary results of the outgoing year. By that time it was built and handed over to the fleet approx. 40 pennants of different classes are submarines, warships and boats, as well as auxiliary vessels of different classes. At the time of publication of that information, the delivery of four more warships was expected, and by now three of them have been included in the fleet.

This year, the ships and vessels ordered under the current State Arms Program for 2011-2020 were handed over. Its goal was to increase the share of modern models in the armed forces to 70%. At the beginning of the year, it was reported that by that time the share of new samples in the Navy had reached 63%. Obviously, the delivery of more than 40 orders and the delivery of other systems will further increase this figure.

Submarine construction continues for several major projects. However, this year the fleet received only two submarines, and the delivery of the next several was postponed to 2021. In addition, several new ships of different classes and designs are expected next year. 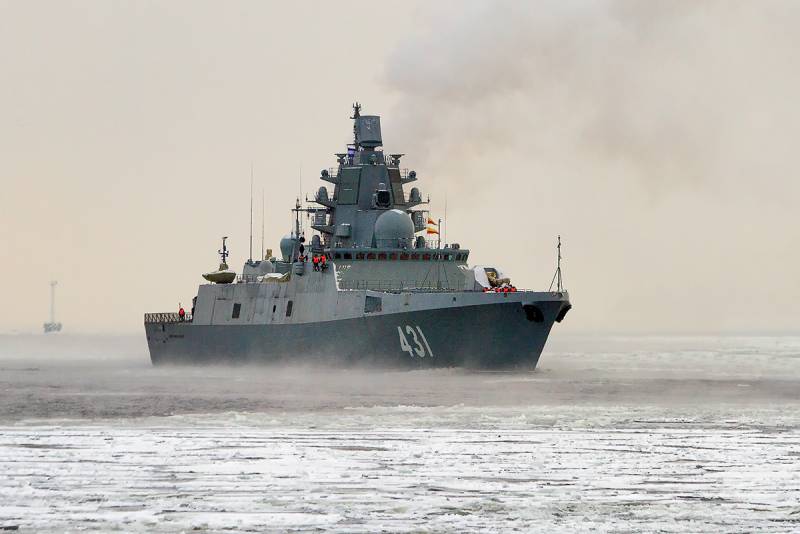 The frigate "Admiral of the Fleet Kasatonov" on sea trials
In June, the Northern Fleet included a new strategic submarine missile carrier "Knyaz Vladimir" pr. 955A "Borey". This is the fourth SSBN of the new project in the Navy and the second for the KSF.

In October, the Pacific Fleet received its second diesel-electric submarine, project 636.3. The ship "Volkhov" joined the existing "Petropavlovsk-Kamchatsky" and is preparing to solve training and combat missions. The transfer of the third submarine of this series is expected next year.

For the surface fleet

The main news In the context of the renewal of the surface forces, the long-awaited acceptance of the first serial frigate, project 22350, Admiral of the Fleet Kasatonov, into the fleet. Due to this, since July 2020, the Northern Fleet has two ships of this type. Receiving the third, Admiral Golovko, is expected next year. 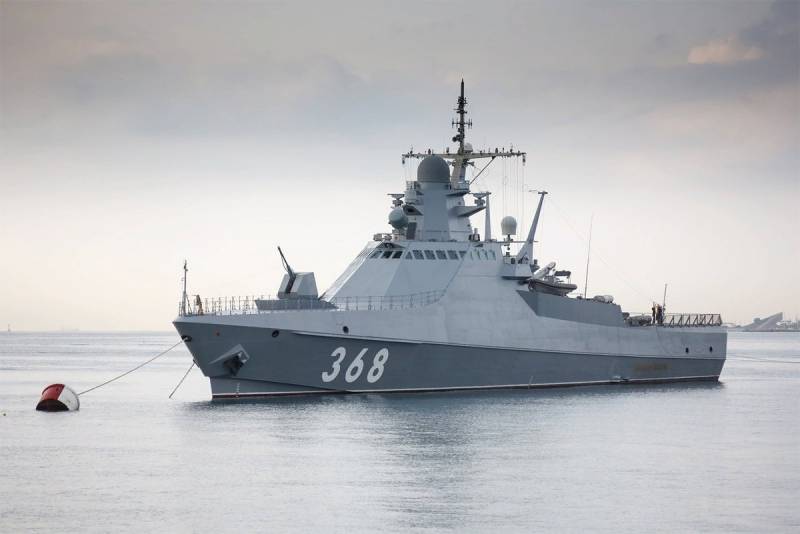 Patrol ship "Pavel Derzhavin"
On December 25, the newest corvette "Hero of the Russian Federation Aldar Tsydenzhapov" pr. 20380 was accepted into the Pacific Fleet. This is already the seventh ship of its project and the third in the KTOF. By the end of the month, the surface forces of the latter will receive another corvette, built according to a similar project.

In November, the third small missile ship, project 22800, Odintsovo, was handed over to the Baltic Fleet. The next ship of this series is planned to be delivered in a year. At the same time, the series is gaining momentum. Five ships of this project are being completed at the wall and preparing for testing at once, and one more will be launched in the near future.

At the end of November, the Black Sea Fleet took over the third patrol ship, project 22160, Pavel Derzhavin. In the near future, the fourth building will be launched, which is planned to be completed and tested by the end of next year. 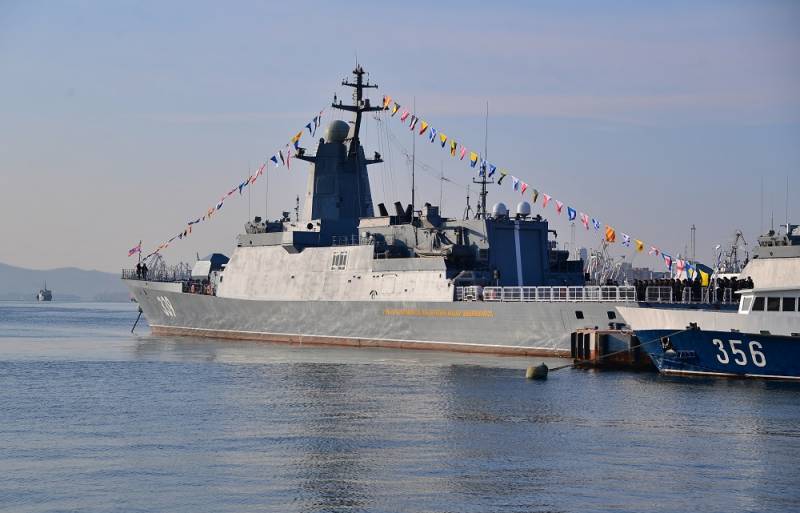 Corvette "Aldar Tsydenzhapov" during the flag raising ceremony
On December 23, the handover ceremony of the second large landing ship, project 11711, took place. After several years of testing, "Petr Morgunov" was transferred to the KSF; he will serve along with the lead "Ivan Gren". This completes the construction of ships on the base project 11711. New BDK will be built according to the updated project.

On December 26, the Pacific Fleet received another mine defense ship Yakov Balyaev, built on Project 12700. This is already the fifth minesweeper of its type - and the first ship of a new generation within the KTOF.

During the year, significant numbers of boats of various types and for various purposes were transferred to several naval formations. In particular, within the framework of the third contract, the delivery of boats of project 03160 to the Baltic Fleet is being carried out. It was delivered three units from July to November and new pennants will appear in the near future. 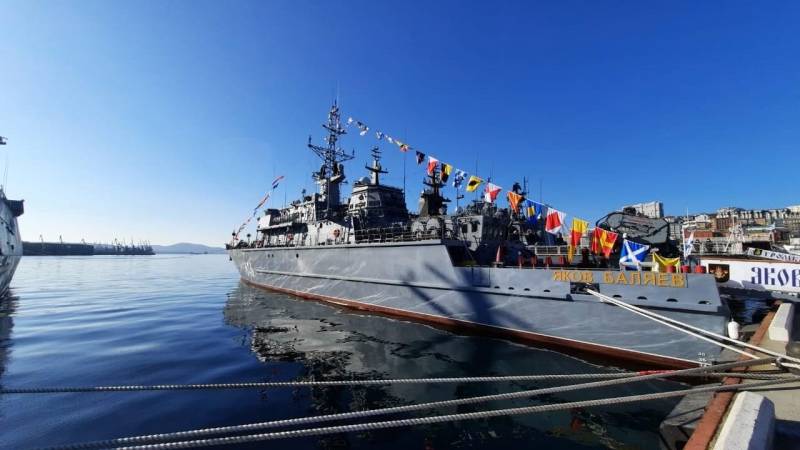 The newest minesweeper "Yakov Balyaev"
Until the end of this year, the fleet plans to accept only one combat ship. Recently state tests were completed by the lead corvette of project 20385 - "Thundering". Right now, the ship is being prepared for delivery to the customer and for raising the flag. Like a number of other new products this year, it will go to KTOF.

In March, the Northern Fleet received a new auxiliary / oceanographic vessel "Akademik Aleksandrov" pr. 20183. The vessel with a displacement of 5,5 thousand tons is intended for research and search and rescue operations, is capable of carrying deep-sea vehicles and can carry various cargoes. The KSF already has one such vessel, and for several years a unified weapons transport of the project 20183TV has been serving as part of the KTOF.

The Hydrographic Service of the Navy received two new vessels this year. These are the small vessel of the project 19910 "Nikolay Skosyrev" and the large hydrographic boat of the project 19920 "Alexander Makorta". Three more similar BGKs are in a high degree of readiness, and they may be commissioned in the near future. In addition, two large boats, project 23040G and one project 23370G, passed state tests. All these vessels will be distributed between the Northern, Baltic and Black Sea fleets. 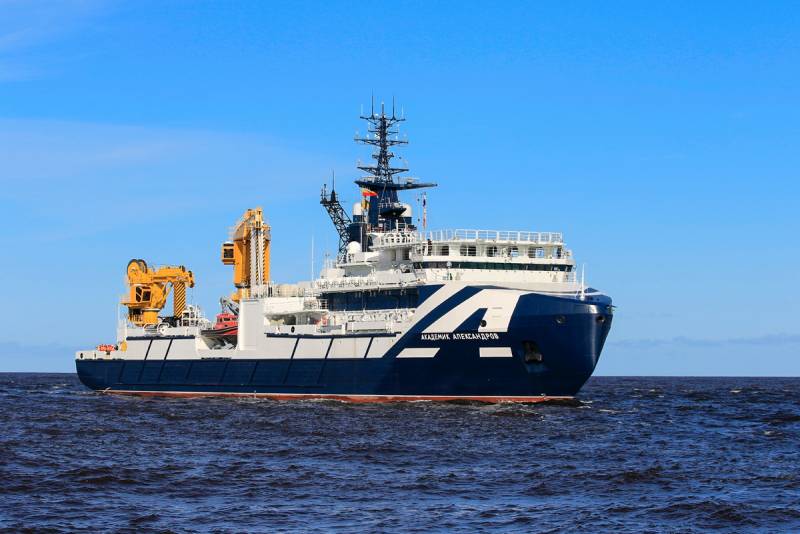 Auxiliary vessel "Akademik Aleksandrov"
In February, the Black Sea Fleet received the small tug of the project 23470 "Sergey Balk". The next vessel of this type, "Andrey Stepanov", has been tested and is preparing to be handed over to the customer.

A significant number of auxiliary vessels of several classes and types are at various stages of construction and testing. Some of these orders will be delivered during the next 2021, while others are expected later.

For the further development of the Navy, new systems, components and technologies are needed. In this context, promising weapons attract the greatest attention. So, in the future, various warships of the Navy will be able to receive a new hypersonic anti-ship missile "Zircon". This product is being successfully tested, and the next launches took place recently. Defense industry sources report successful completion of the 2020 test program. 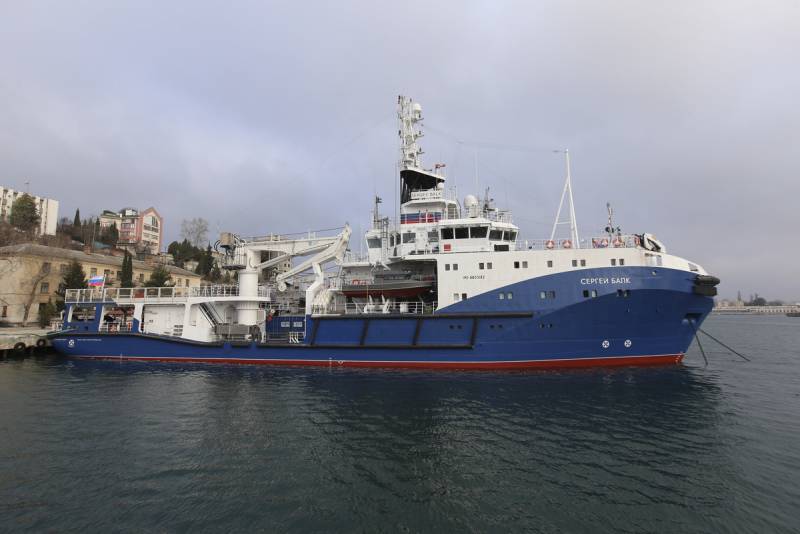 Small tug "Sergei Balk" after commissioning, February 2020
The deployment of the new missile system will begin in the near future. The missile is compatible with universal launchers, which seriously expands the range of potential carriers. The latter are considered ships and submarines of several types of modern construction, as well as modernized ships of old projects.

Over the past few years, military shipbuilding has faced the problem of the lack of imported propulsion systems. At the end of November, the United Engine Corporation handed over to the shipbuilders the first unit М55Р, intended for installation on the new frigate of project 22350. The appearance of this product will allow to continue construction and transfer the planned 5-7 ships to the fleet.

With an eye to the future, new ships and vessels are laid, incl. recent projects. The main news in this area came in June, when the laying of two universal landing ships of project 23900 took place. Also this year frigates and corvettes, submarines of various classes and numerous auxiliary vessels were laid. 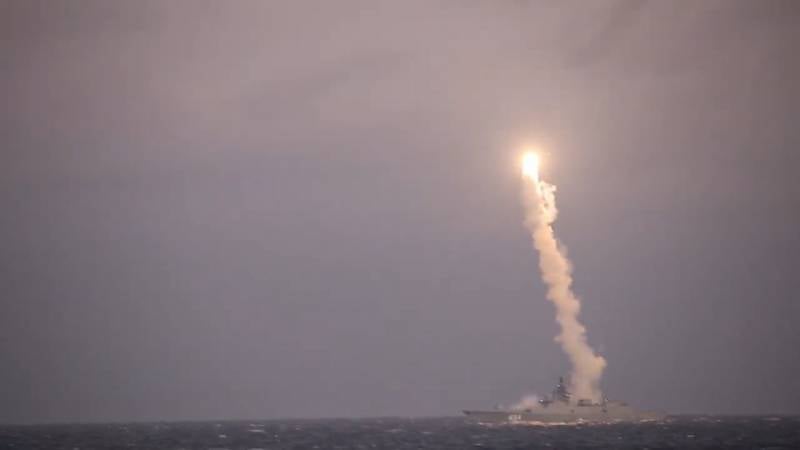 Test launch of the Zircon rocket

During this year, shipbuilders handed over to the navy more than 40 combat and auxiliary units of different classes. Several more pennants are expected in accordance with naval traditions - "under the herringbone". In general, from the point of view of updating the ship composition, the outgoing 2020 can be considered successful. He will leave a noticeable mark in the form of new ships and vessels that can serve for several decades.

The implementation of the current plans was not easy and in some cases faced the already known difficulties. Only recently it was possible to solve the problem of import substitution of propulsion systems, after long years of waiting, an end was put in the disputes around the UDC, the topic of reducing plans for the construction of ships, etc. was repeatedly raised. One of the consequences of such difficulties was the shift in the delivery dates for individual ships.

However, the fleet and industry have coped with some difficulties and are now dealing with other tasks that are urgent and aimed at the future. On the whole, 2020 ends successfully, and the next year, 2021, promises new important events.

Ctrl Enter
Noticed oshЫbku Highlight text and press. Ctrl + Enter
We are
Where do we have so many SSBNs?On the secrecy of the Soviet SSBNs
Military Reviewin Yandex News
Military Reviewin Google News
73 comments
Information
Dear reader, to leave comments on the publication, you must sign in.