Military motorcycles are back in fashion 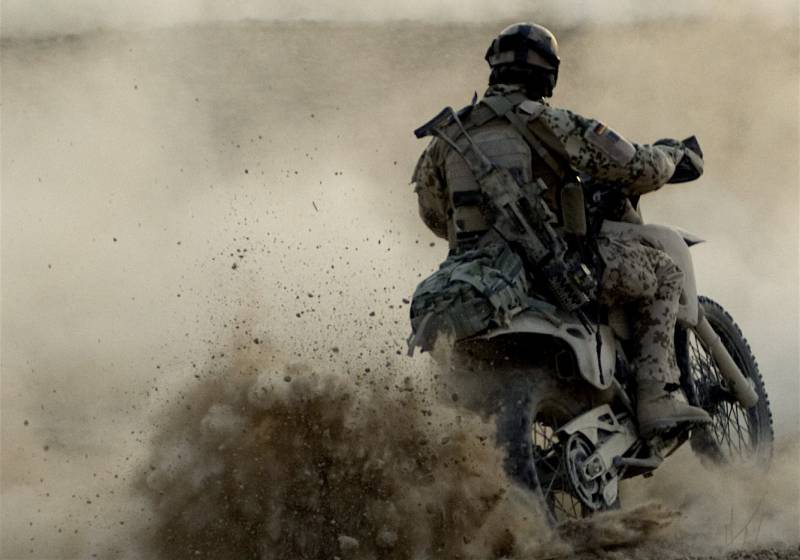 Motorcycle technology is again becoming relevant for the military. If ATVs are focused more on the transportation of goods and equipment, then motorcycles provide fighters with high speed and mobility. After World War II, when motorcycles were massively used by German and Soviet troops, this technique began to lose popularity, almost completely disappearing from the armies of all countries. This continued until the end of the XNUMXth century, and in the XNUMXst century military motorcycles regained their right to life. True, we are no longer talking about motorcycle battalions or regiments - now the use of motorcycles is more limited.

Motorcycles in recent years have been massively used in local conflicts and wars around the world. It is a convenient, simple and cheap vehicle that, in fact, replaces a horse. Various motor vehicles were massively used during the hostilities in Syria and Libya, and motorcycles were used by all parties to the conflict. At the same time, the Syrian army adopted the tactics of using motorcycles from illegal armed groups and terrorists. One example of the successful use of motorcycles by the Syrian Arab Army was the liberation of the city of Salma in the northeastern province of Latakia in 2016, when the Syrian military used about 80 "iron horses" in the operation to liberate the city.

Motorcycles have a number of obvious advantages that make their use in combat warranted. In addition to high speed and increased mobility of military personnel, motorcycles have good maneuverability and speed, which allows you to quickly change the trajectory of movement - so as not to come under fire or get out of sniper fire. The low weight of the motorcycles is also an advantage, as it allows you to overcome mined terrain. Mines designed for heavy military equipment just don't go off under a motorcycle. 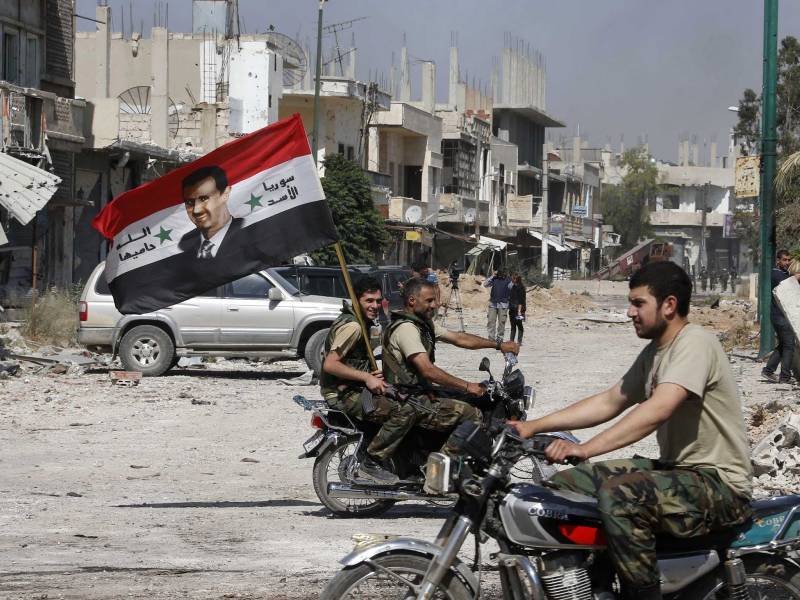 In battles, the Syrian military used motorcycles to transport light ammunition and weapon systems, food and water, and transport the wounded. In addition, motorcycles were massively used for reconnaissance, providing soldiers with the ability to carry more equipment with them than they could carry on their own two, including night vision devices, sophisticated optical devices. And machine guns / grenade launchers are more convenient to carry than to carry.

Syrian officers do not deny that they have adopted the tactics of using motorcycles from the militants. At the same time, as in any army, they systematized and worked out the tactics of using technology, preparing a special course on the use of motorcycles in urban development and in conditions of partisan war. The Syrian military believes that motorcycles and combat with them could again become a common tactic for regular armies.

In an interview with Sputnik, a Syrian serviceman, Hajj, spoke about the experience of using motorcycles in combat. According to him, the soldiers were divided into groups, each of which had three motorcycles. Such groups were very actively used for the transportation of ammunition and food, as well as for the removal of the wounded from those areas where the operation of conventional vehicles, including ambulances, was difficult or completely impossible. The soldier noted that in the future, motorcycles may become an indispensable attribute of the equipment of some fighters - as common as a rifle weapon and ammunition.

Motorcycles in the US Army and NATO countries

Interest in motorcycles today exists both in the US Army and in NATO countries. For the first time, the Americans again used motorcycles on a fairly massive scale in hostilities during the 1991 Gulf War. Desert terrain with large open spaces facilitated movement on motorcycles, which were used for reconnaissance, raids behind enemy lines and patrolling the area. During the Gulf War, motorcycles were used by American paratroopers from the 101st Airborne Division, as well as their counterparts - British paratroopers. 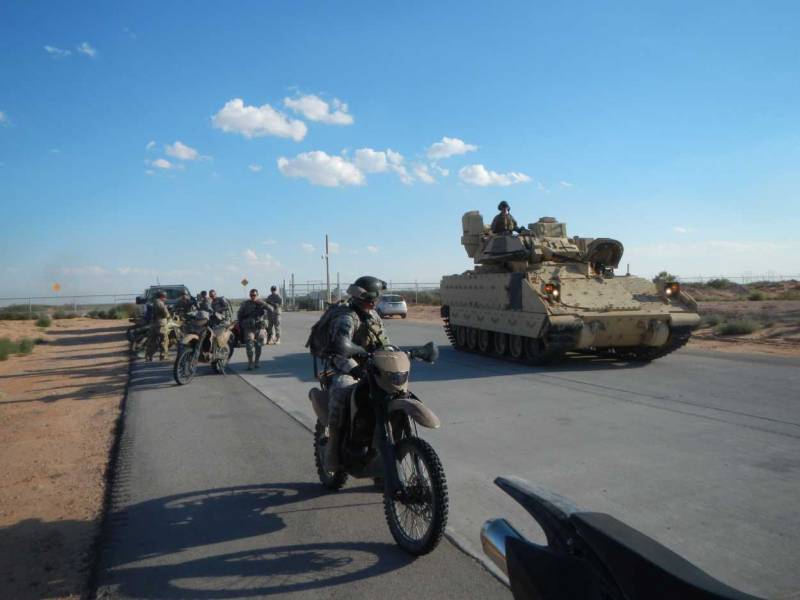 During Operation Desert Storm, the US military used conventional gasoline versions of motorcycles, and today they are increasingly developing and operating electric motorcycles. At the same time, motorcycles were already an equipment option. For example, the M3 Bradley combat reconnaissance vehicle, created on the basis of the famous tracked BMP M2 Bradley, was equipped with one motorcycle, which was transported in the troop compartment at the left side. Thanks to the reduction of the landing force to two reconnaissance observers, the car was filled with small arms, reconnaissance equipment and equipment, including a portable radar, 10 TOW ATGMs and a motorcycle.

In addition, this feature made it possible to conduct reconnaissance both in a combat vehicle and in a combined way - with the allocation of a dismounted group of two or three people who can use a motorcycle. With the help of a motorcycle, scouts can move faster over rough terrain, they can operate at a greater distance from the car. At the same time, motor vehicles are easy to transport, including in helicopters and airplanes, which is why they are used by special operations forces and paratroopers. Also, motorcycles can be easily hidden in the terrain, unlike a car. True, motorcycles do not provide any protection to fighters, their only protection is high mobility. At the same time, they have an obvious advantage - low operating costs, including a small need for fuel. It is for these reasons that the US Special Operations Forces used motorcycles during the war in Afghanistan. 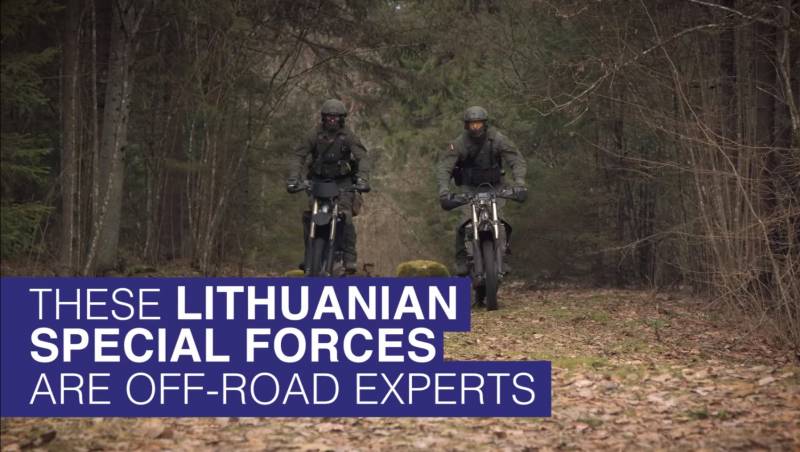 These skills were then successfully used by the Lithuanian military in Afghanistan in the province of Zabul, escorting convoys of peacekeeping forces. Motorcycles made it possible to conduct successful patrol and reconnaissance work, intercept enemy scouts, and also prevent ambushes. Like their Syrian counterparts, the Lithuanian military noted that the motorcycle is a very light vehicle, so many of the booby-traps and IEDs of the Taliban with push fuses simply did not fire on them.

Military motorcycles and ATVs in Russia

The military in Russia also turned their attention to motor vehicles, which can increasingly be found at various military exhibitions. At the same time, in our country they are showing interest in both motorcycles and ATVs. For example, AM-1 ATVs are in service with special forces in Russia. The same ATVs enter service with the Russian Arctic motorized rifle brigades. They are designed and built on the basis of the serial model of the PM500-2 ATV (assembled in Rybinsk) and equipped with a four-stroke single-cylinder engine with a maximum power of 38 liters. from. In modern armies, ATVs have essentially replaced sidecar motorcycles from the Second World War.

The AM-1 model is distinguished by the presence of a plug-in all-wheel drive and a special wheel propeller with an enlarged tread, which increases the ATV's cross-country ability and allows it to operate more confidently in off-road conditions. Carrying capacity of the model - 300 kg, speed - up to 80 km / h. The model can be safely operated in frosts down to -20 degrees, moreover, with its own weight of 500 kg, the all-terrain vehicle is able to tow a trailer of the same weight. The military version differs from the civilian by the standard weapon attachment system: it can be both grenade launchers and machine guns. The model has a wardrobe trunk that can be used to transport ammunition. In addition to conventional lighting equipment, AM-1 is equipped with a spotlight. And the military model gas tank received a self-tightening coating, which should eliminate fuel leakage if the integrity of the tank is damaged. 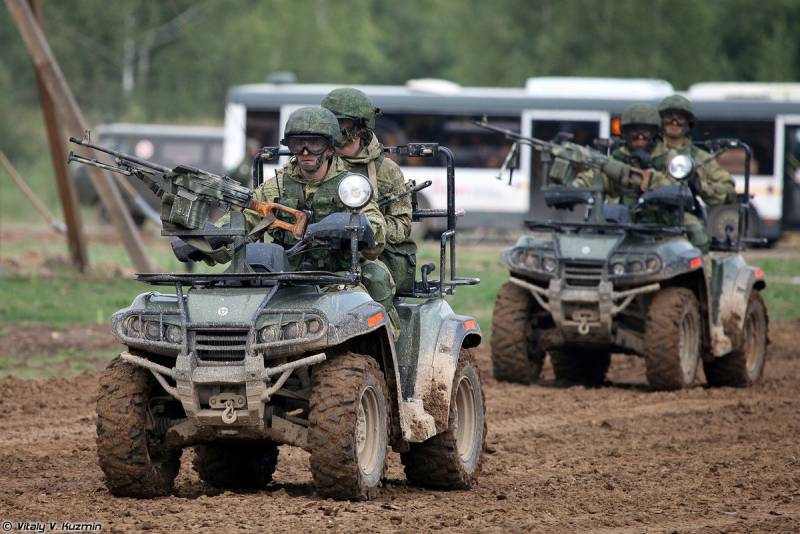 ATVs AM-1. Photo: Vitaly V. Kuzmin, vitalykuzmin.net
On the basis of the same model PM500, but already with a 6x4 wheel arrangement, a mobile mortar complex was created, which includes the PM500 6x4 all-terrain vehicle itself, an 82-mm 2B24 mortar and a cargo platform for transporting ammunition. This technique significantly increases the mobility of a two-man mortar crew. The power reserve is up to 200 km, the maximum speed is 80 km / h. At the same time, the all-terrain vehicle is able to carry 48 shots of 3VO1 or 24 shots of 3VO36, according to the website of the Central Research Institute "Burevestnik". 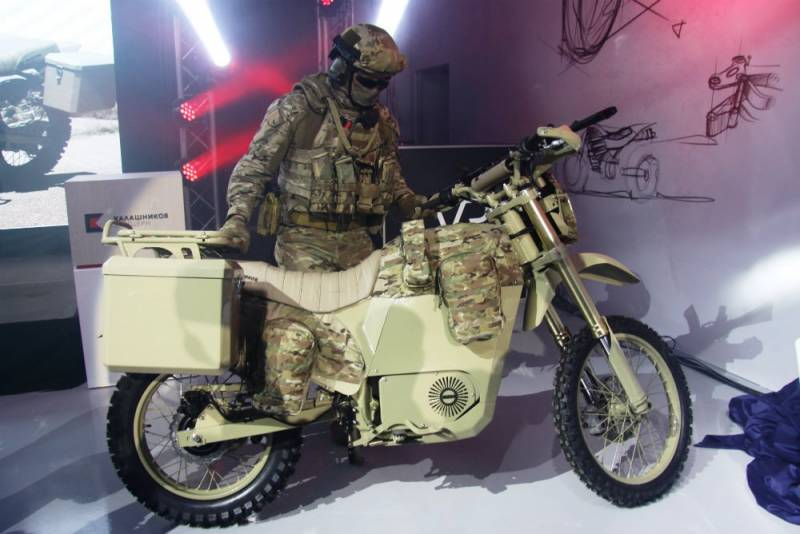 A variant of the electric motorcycle of the Kalashnikov concern
Later, the concern has repeatedly demonstrated versions of electric motorcycles for law enforcement and civil structures, a version of Pulsar for the civilian market, including a lightweight version of the civilian model in 2020. The concern also showed models for the special forces "Spetsnaz" and the Ministry of Defense of the Russian Federation under the designation SM-1. The concern demonstrated the SM-1 electric motorcycle at the Army-2018 forum. The declared maximum speed is 90 km / h, the cruising range is up to 150 km. The motorcycle was introduced with a brushless DC motor with a water cooling system. The main advantage of such models in comparison with motorcycles with traditional gasoline engines is their quiet running. In addition, the model is significantly cheaper to operate. Using electric motorcycles is on average 12 times cheaper than the fuel costs of traditional motorcycles.