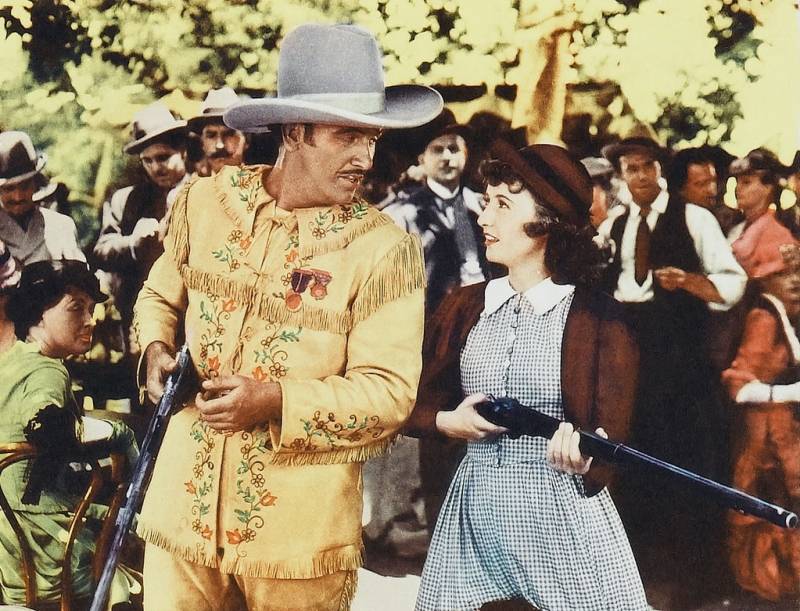 "Four things above all: women, horses, power and war"
(Rudyard Kipling)
Land beyond the ocean. As you know, different people are needed, different talents are important. Someone masterfully composes music, someone sings, another forges iron and bakes pies, and such that they are simply delicious. We know thousands of famous poets, musicians, a little less great artists and scientists, inventors, engineers, and besides them, also doctors, and, finally, even travelers. But among people with truly unique abilities, there are those who were engaged in hunting and shooting, having managed to become famous in this, let's say, not quite ordinary field. Among them there are heroes, their own legends. But today we are going to tell you about ... the most famous female shooter in America, whose name even the most peaceful Americans know. Although, most likely, not by her real name, but by the pseudonym under which she became famous - it is better not to think of a pseudonym: Baby Sharp Shot! 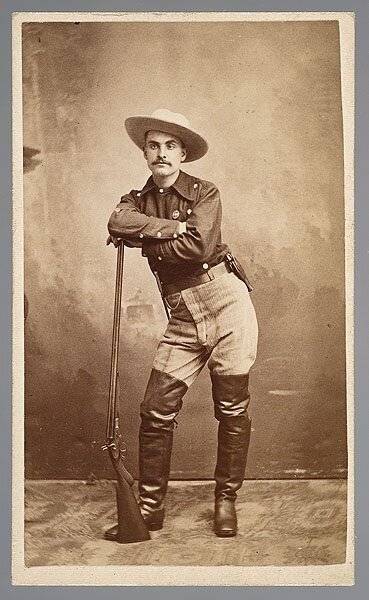 The man of her destiny is Frank Butler! Handsome, isn't he?
At baptism - and she was born in 1860 in Dark County - the girl was named Phoebe Ann Moses, but her name was all Annie Oakley. Already at the age of 10, she learned to shoot accurately from a gun and a revolver, she was not at all afraid of the sounds of shots or fire. However, then in America all the wives and daughters of farmers knew how to shoot, because that's how life was there at that time. It's just that someone knew how to shoot better, and someone worse. Phoebe's father died when she was only 8 years old, and it was young Annie who began to feed the family by hunting. Life in childhood did not spoil her at all, which she later wrote about in her memoirs, but the hardships and hardships did not embitter or corrupt her.

Until 1875, she continued to hunt and feed the whole family, selling shot game. And then fate sent her a chance, which she did not fail to take advantage of. 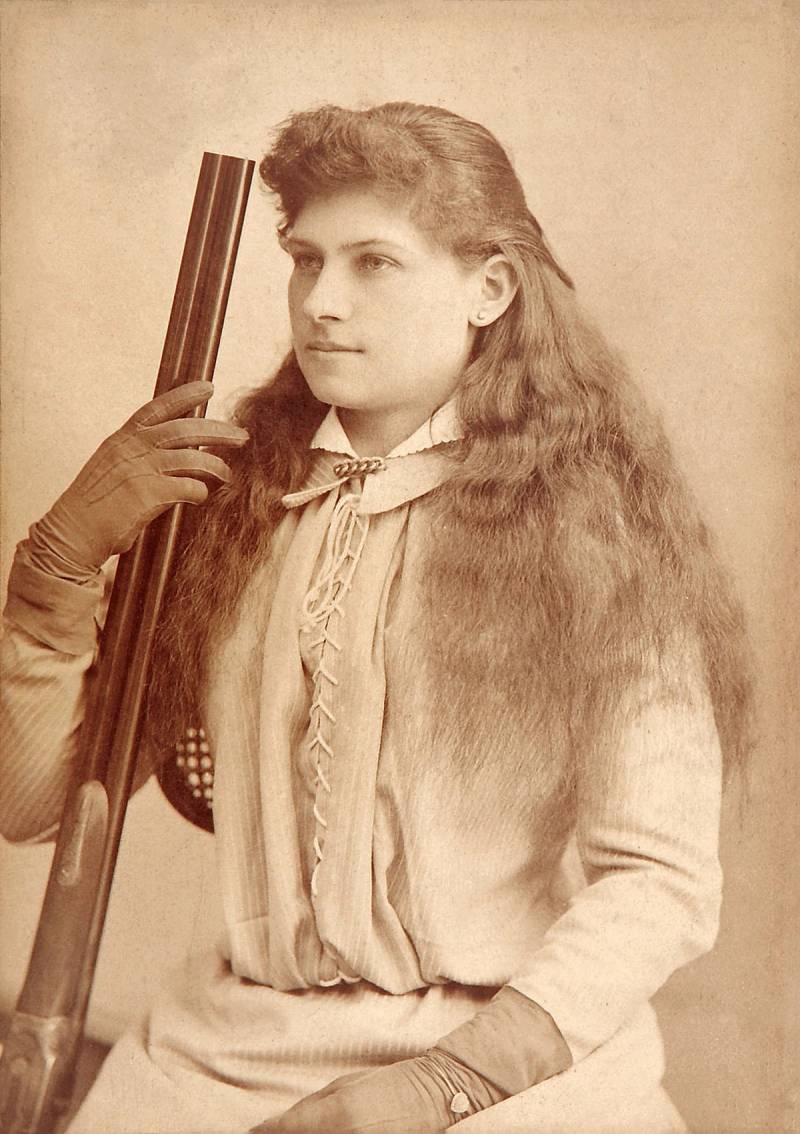 Young hunter
Then in America they loved shooting competitions. And so, at the age of 15, she took part in one such competition, which was staged at the opera house in the city of Cincinnati. Local celebrity Frank Butler became her opponent, the bet was $ 100 (a lot of money at that time!), And the girl managed to defeat him decisively. Frank was simply amazed at her skill. I decided to get to know her better ... and fell in love, and when she became a little older, he offered her his hand and heart. And the young girl immediately agreed and married Butler. And they started performing with marksmanship numbers in a traveling circus. In America, marksmanship was then held in high esteem, life depended on it, but even the most well-aimed shooters applauded the girl when she shot the ash off her husband's cigar with a shot. It was then that Phoebe Annie Moses became Annie Oakley, got under this name in history. 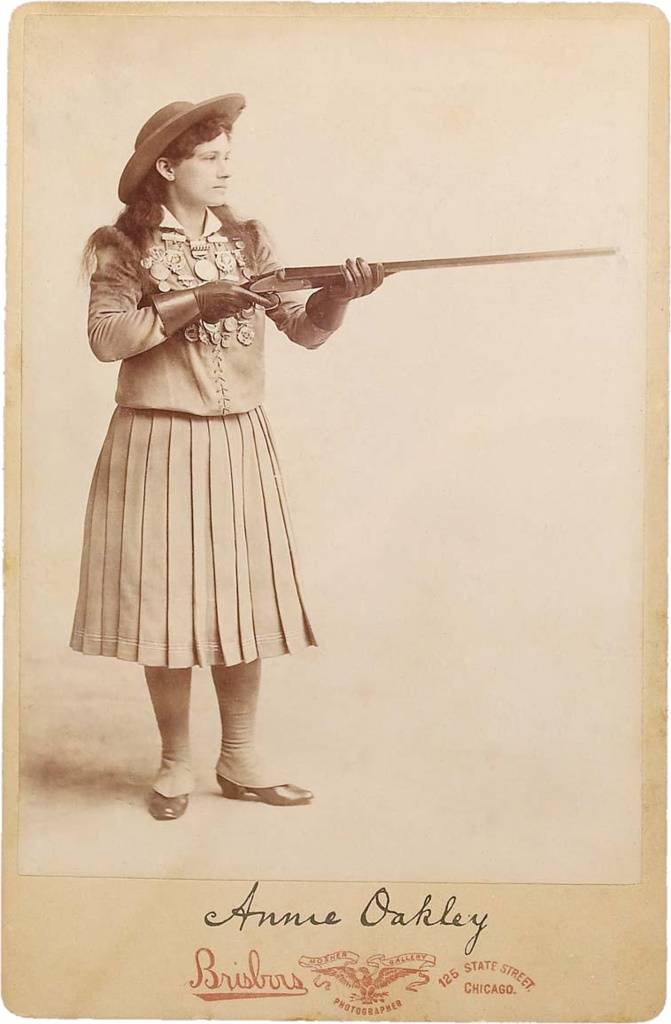 A popular postcard from those years: Annie Oakley with a double-barreled gun and in her stage costume
Annie's stage outfit was a cowboy hat, suede leggings, leather seals with leggings, and a pleated skirt. In this outfit, she jumped on a horse and dashed through the arena, shooting at multi-colored balls that were thrown into the air by the circus attendants. The artist also shot at playing cards, which were then taken away by the audience as souvenirs. And she did a lot of other things, including shooting at dimes thrown into the air ... 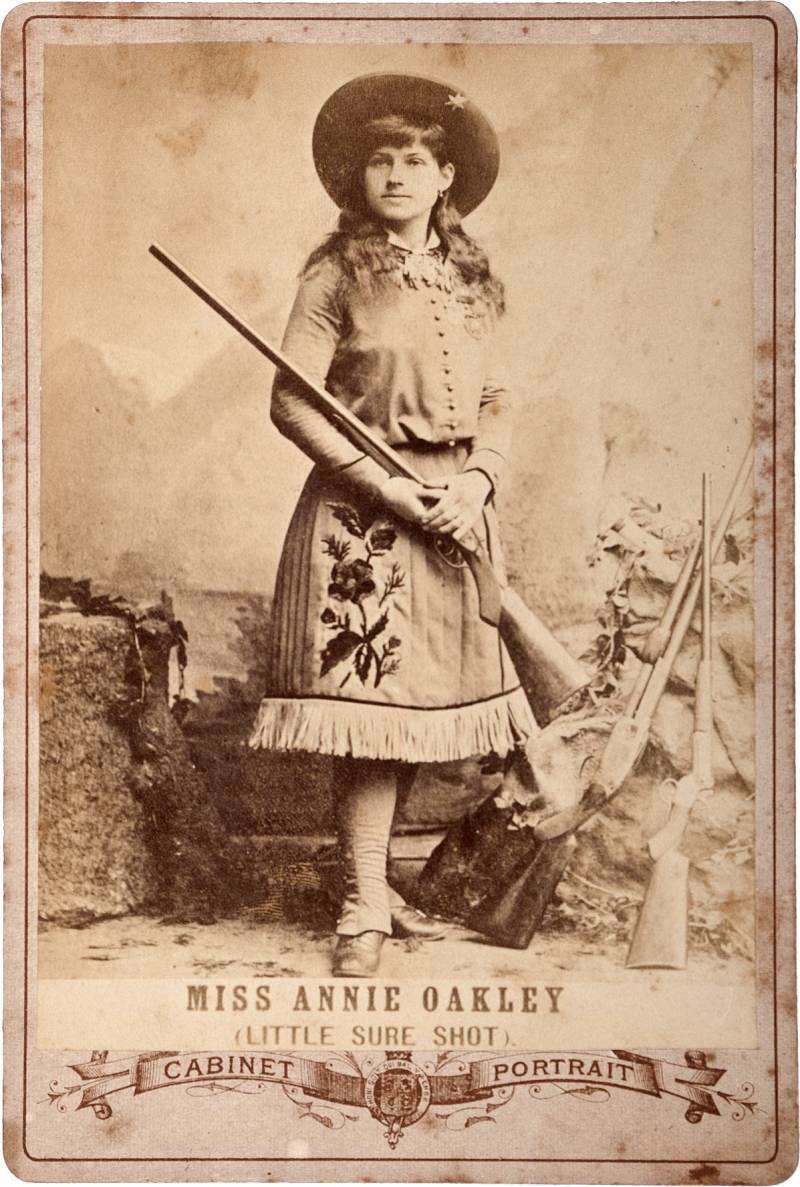 One of her stage costumes (photo 1891)
And then what happened: Annie and Frank met with the famous William Cody - Buffalo Bill, and he, appreciating their potential, offered the couple to participate in his show "Wild West". Here I must say that Bill came up with and managed to stage well, just an exceptional show in its enchanting quality, the people on which were simply piling up. It made a special impression on immigrants from Europe who had recently arrived in the United States and were not yet familiar with the local exoticism from their own experience. What and how it happened was very well described by the German writer Liselotta Welskopf Heinrich in the book "Harka - the son of the leader", the first part of the trilogy "Sons of the Big Dipper". A carriage with travelers, followed by the Indians, drove onto the stage. The beauty from the carriage was tied to a board, and the Indians stuffed her outline with knives and tomahawks, which made the too sensitive ladies among the spectators faint. Then cowboys appeared and shot at the target at a gallop, after which the numbers followed by the author's marks of shooting - and it was all so cool that people were not even stopped by the high entrance fee! 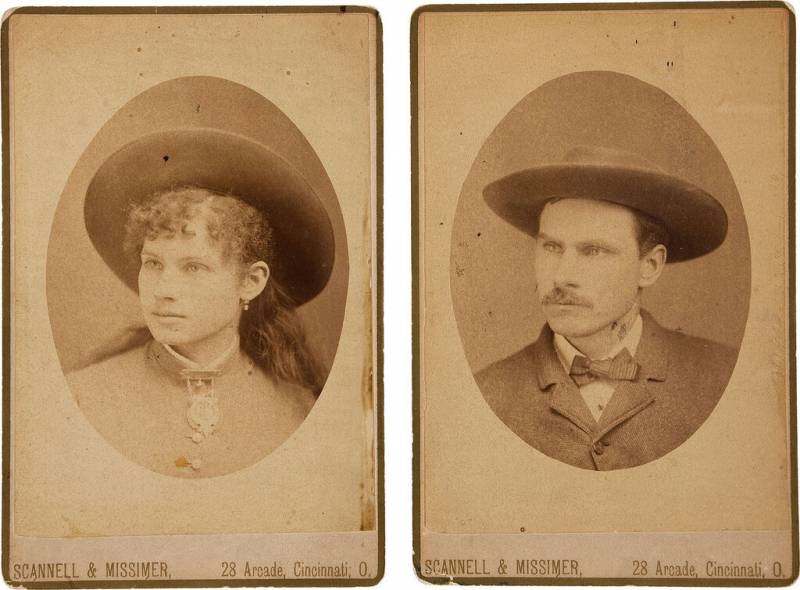 Annie and Frank
Annie and Frank began working on the show in 1885. And Annie's performance was always the first. Everyone noted that the young artist not only shoots well, but also takes her numbers very seriously. She always started "from simple to complex" and acted with great artistry, knew how to intrigue the audience and "pull intrigue", and most importantly, she did everything so as not to scare children and especially impressionable adult spectators. Therefore, to begin with, she took a .22 caliber revolver and behaved in such a way as to gain the trust of the "little viewers". Then she moved on to a more powerful arms, the shots from which were louder, but they no longer caused panic and fear. 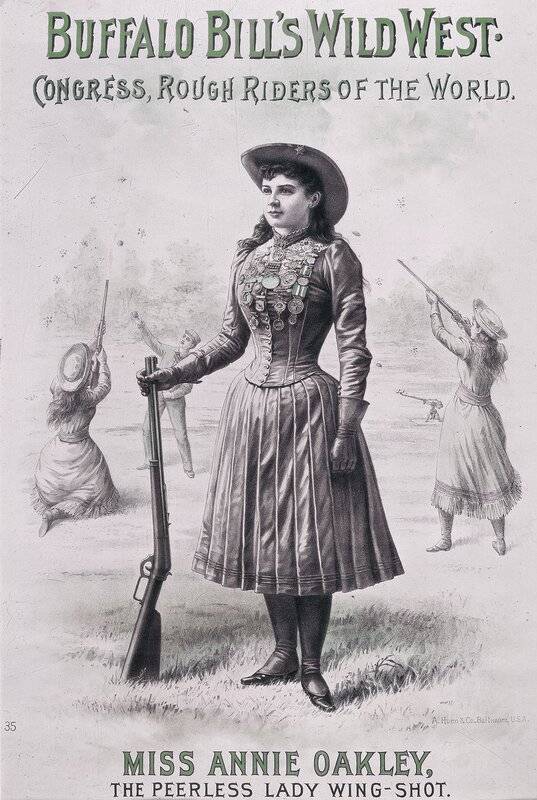 Annie Oakley Promotional Poster
And of course, Annie simply did not have any problems with the weapon. As soon as the Colt and Winchester firms learned about her success and performances, their representatives began to vying with each other to provide her with piece samples of their weapons. As a result, she gathered a whole arsenal, and even the most famous weapons manufacturers took into account her authoritative opinion. 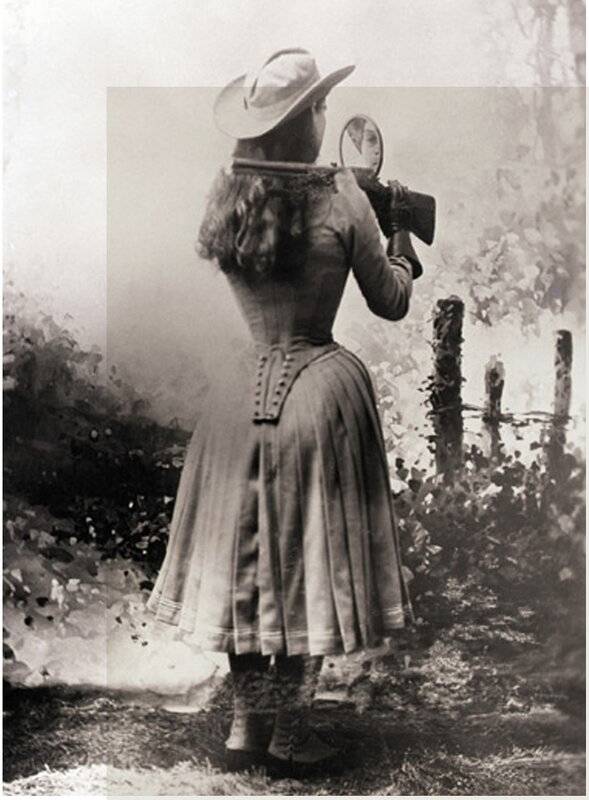 Annie shoots through the mirror
Annie and her husband worked in the troupe of Bufallo Bill for 17 years and gained phenomenal fame among the American public. At the same time she met the Sioux leader Sitting Bull - Sitting Bull, a person just as outstanding and very famous. After all, it was under his command that the Indians managed to completely destroy the detachment of General Custer in the battle at the Little Big Horn River in 1876. He was simply fascinated by Annie's skill and ... made her an "honorary Indian" of the Sioux tribe, giving her the name Baby Sharp Shot. 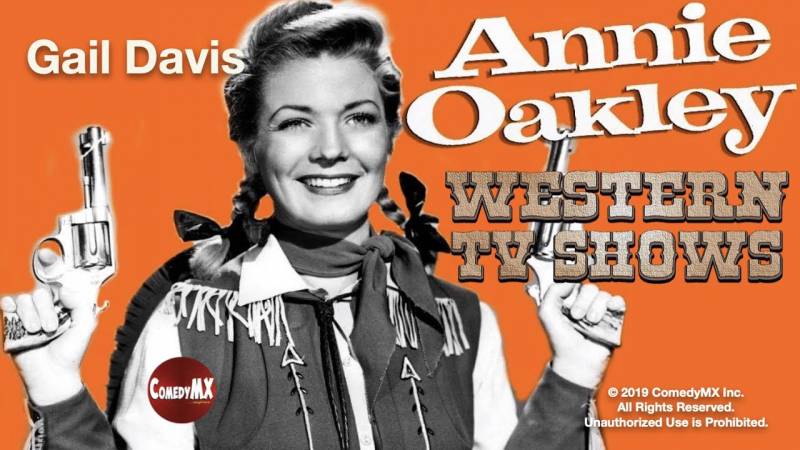 Even a TV show with Annie appeared in America, although in it she does not look like herself at all!
Well, in 1887, "Wild West" first went on tour outside the United States. Truly sensational was her performance in England, where at Buckingham Palace she demonstrated her marksmanship skills in front of Queen Victoria herself. And at first, the British public did not like her provincial manners at all, but then she forgave her everything, so prim British ladies were struck by her talent. 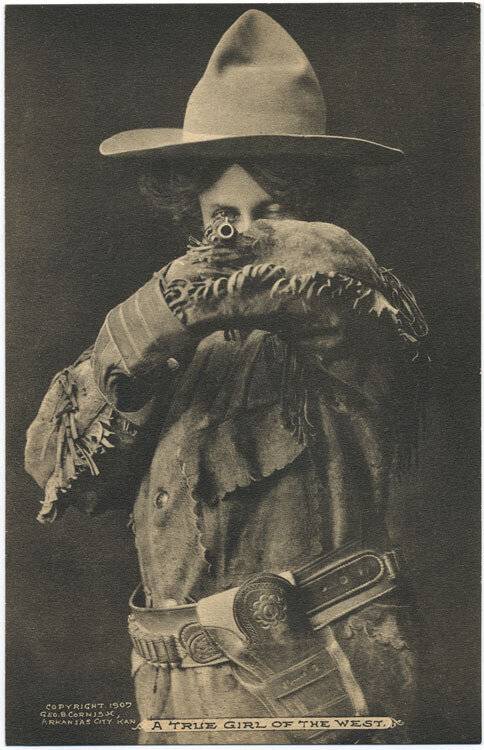 Annie in 1907 in Arkansas City
Having got acquainted with the "Wild West", the population of Foggy Albion fell into the utmost delight. In aristocratic circles, and even among the ladies, it has become fashionable to learn to shoot a gun. And then Annie again rose to the occasion: she organized "master classes" for representatives of the high society and charmed them with her courtesy. And the British ladies liked the innocence of this girl so much that they recognized her as almost perfect and even began to imitate her in some way. Grand Duke Mikhail Mikhailovich, who was at that time in England, had the fame of a first-class shooter and, of course, decided to prove to Enya that he was no worse than her. But she won a decisive victory over him, from which he came to complete admiration. 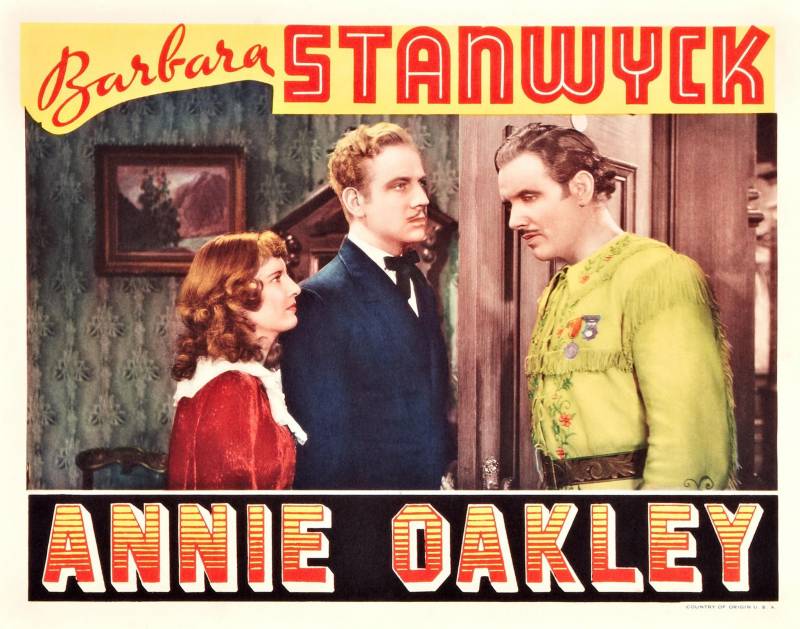 Annie Oakley advertising poster
The longest was Annie Oakley's third European tour. It began in 1902 and lasted four years. Countries changed, capitals changed, there was always only one thing - an amazing success! The President of France and the King of Italy applauded Annie, then the future German emperor, Crown Prince Wilhelm, who also wanted to take part in her performance, was added to them and ... the girl in cold blood shot off the tip of his smoking cigar. By this, he publicly showed his courage, well, and Baby Sharp Shot once again proved her ability to wield weapons, which admired everyone - both commoners and crowned heads. Later, however, when the First World War had already begun, Annie would say about this case: "I'd better have missed then!" 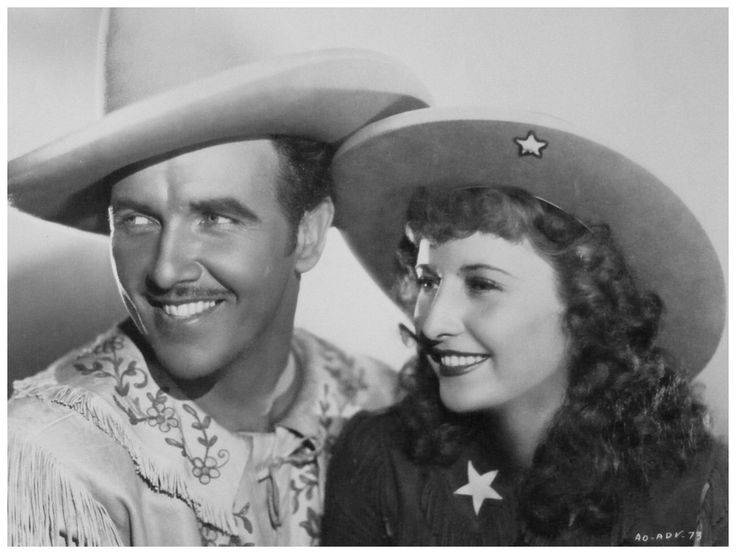 Barbara Stanwick and Preston S. Foster are the main actors in this film
And I must say that the image of Little Sharp Shot influenced the Americans so strongly that in her part in the USA a musical was even staged, named after her: "Annie, grab your gun!", And which soon gained popularity, comparable only to popularity Annie herself. And then there were performances about her and her life, and 11 films were shot. 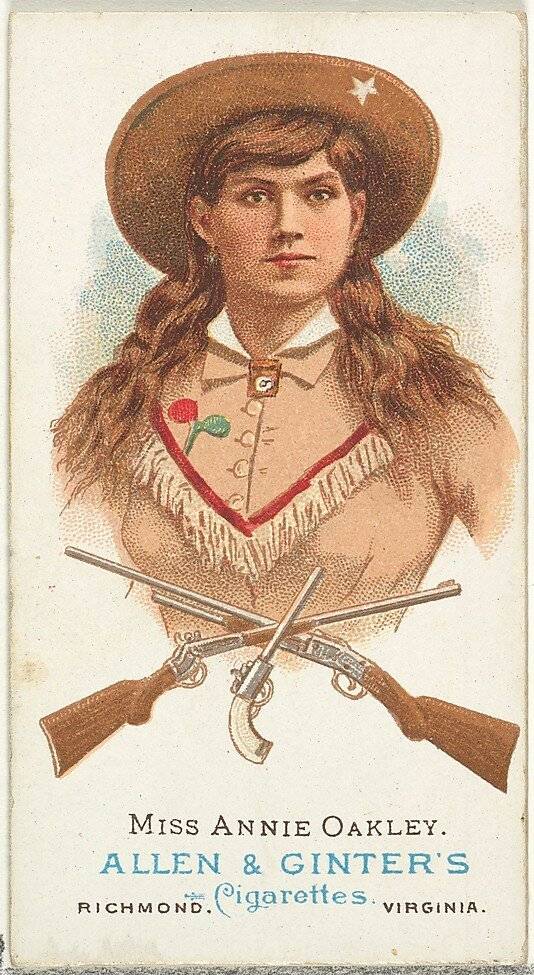 Annie's portrait on a card from a cigarette pack
The fate of Annie Oakley for many Americans, since they were no stranger to weapons, became just a model of a successful career, a career of a person who made himself from beginning to end with his own hands. Well, about the popularity of those samples of guns, from which it was she who shot, you can not even talk. As a result, we can say that Phoebe Annie Moses or Baby Sharp Shot was able to live a long (by that time!), Happy and cheerful life of a famous artist and a loving and beloved wife, she had a chance to soak up the glory and delight from her fans throughout the world. 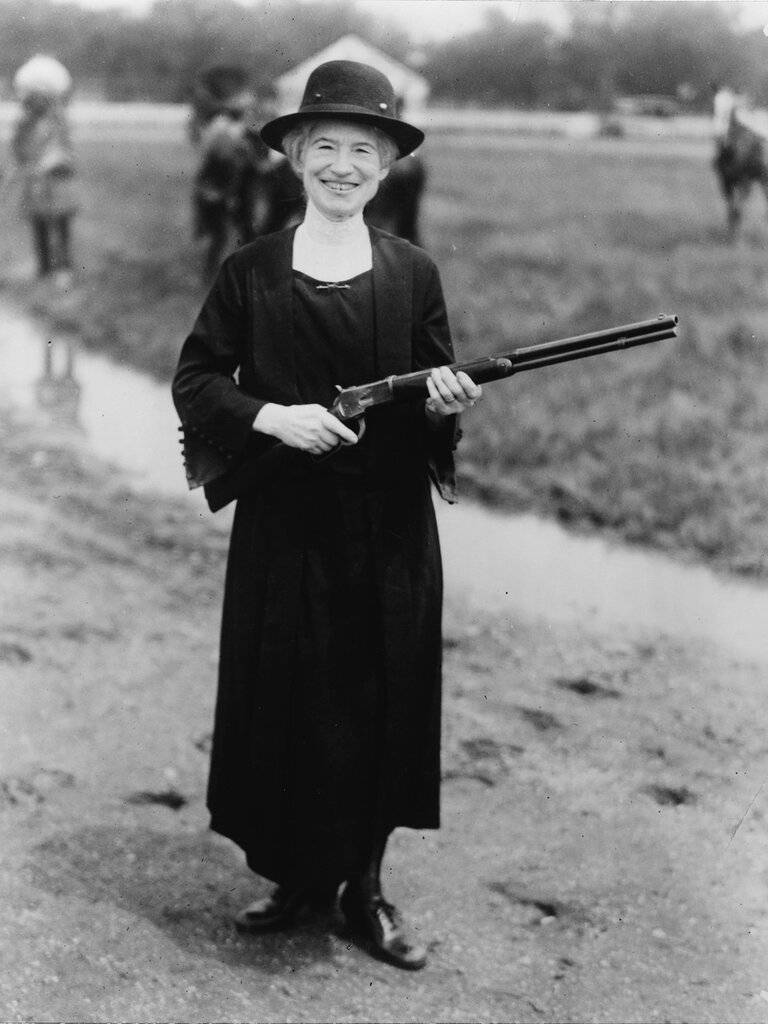 Annie at 62. 1922 ...
She died in her sleep in November 1926 at the age of 66. Her husband, Frank Butler, survived her by only 18 days. He missed her terribly and ... died! It seems incredible, but although she was among men almost all the time, and even "with a weapon in her hands," this did not make Annie either rude or masculine. On the contrary, everyone who knew her noted her modest and even shy nature. For example, she even blushed when her admirers on both sides of the Atlantic Ocean threw bouquets of flowers at her and loudly shouted her name. And it is very significant that one of Annie's guns from Parker Brothers Hammer was auctioned in 2013 for a staggering $ 293.000. What better recognition in America, right? 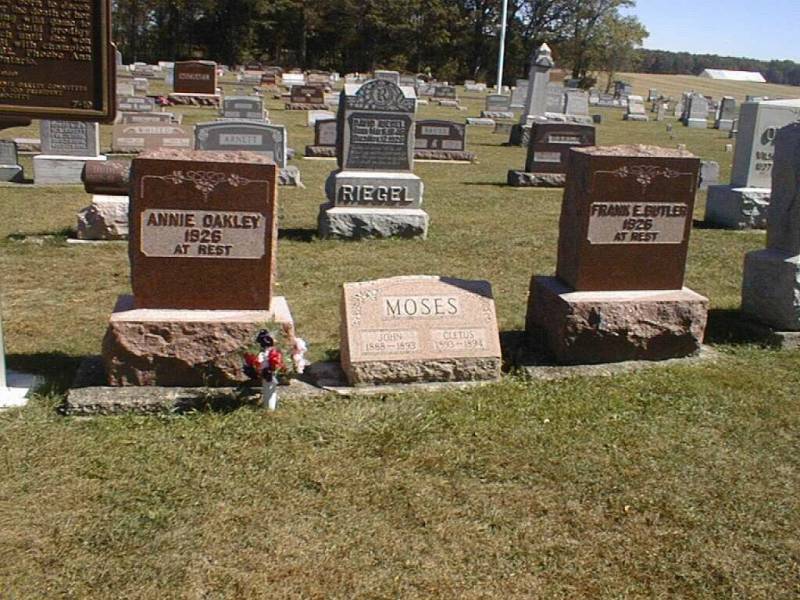 The couple are buried in Greenville, Ohio ...