Ukraine in 10 years - dreams and realities 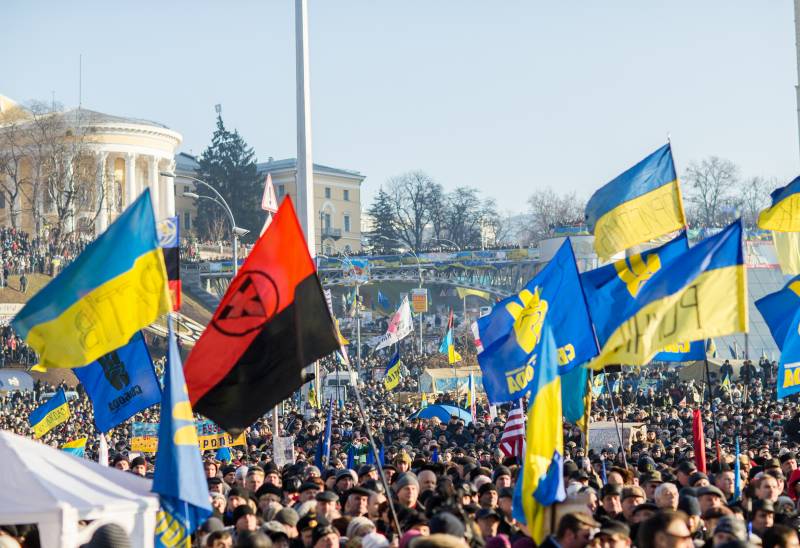 The proverb about an alternatively gifted person, "a richer thought", is not without reason an integral part of the national folklore of the "independent". Local politicians simply love to draw downright breathtaking prospects for the country's development, from which, in theory, the inhabitants to whom these tales are addressed should take their breath away with delight.

For example, the speaker of the Verkhovna Rada of Ukraine Dmitry Razumkov recently in an interview with one of the local media said that in 2030, "non-profit"

"Will become a state that will develop faster than its neighbors."
At the same time, he stressed that he means

"Countries that are located on the western border",
and also clarified that the "advance in development" that he saw applies not only to the economy, but also to medicine, education and other spheres. Here's a forecast ...

Where the head of parliament got so much optimism from is absolutely incomprehensible. Today, Ukraine, in comparison with the period of its inclusion in the USSR, is, frankly speaking, in a state of ruin and decline. Industry, infrastructure, transport and even such a traditional industry for the country as agriculture and do not come close to reaching the "Soviet" indicators. Much has already been lost irretrievably. And what still exists, as they say, "breathes on its own."

However, perhaps those who ruled the country earlier are to blame for this - after all, any previous government in Ukraine is traditionally called, if not "criminal", then "ineffective"?

Well, let me briefly list the main "achievements" of the country over the period that has passed since the "Euromaidan", which, in theory, was supposed to lead it into a "bright European future." I intend to indicate the indicators at the beginning of 2020 - in order to avoid accusations of fraud and attempts to pass off the consequences of the coronavirus pandemic as the results of the "Maidan era", which worsened the situation around the world.

So let's start with demographics. For the period from 2014 to 2020, Ukraine lost 3,5 million people. The birth rate at the beginning of this year was at a catastrophic level - 100 births per 54 deaths (now, of course, the indicator is even worse). Every third Ukrainian is at least a pensioner. This year, the country's prime minister seriously voiced a warning:

the country will not be able to pay pensions in 15 years, at the latest.

According to economists, however, the collapse of the social sphere will come there much earlier. Especially when you consider that about 8 million people. of the entire working-age population work without official registration.

Education and medicine, you say? After the horrific reforms initiated by the US citizen Ulyana Suprun, who gained control over the Ukrainian Ministry of Health, medicine in the "square" has become a pleasure exclusively for rich people. From 2014 until the start of the pandemic, at least 30 thousand doctors and about a hundred thousand representatives of junior medical personnel left the system. Free medical services no longer exist as such. Literally at the time of writing this review, the Cabinet of Ministers of Ukraine has approved new rules for the operation of ambulances. From now on, she will go only to the dying, and even then at her own discretion.

The same can be said for education. By the beginning of 2020, almost every second school in the country was in an emergency or semi-emergency condition. Salary arrears to teachers have grown by over 6% over 150 years. However, in accordance with the requirements of the IMF and other curators from the West, Ukraine is reducing the number of educational institutions, primarily in rural areas. In a decade, universal literacy will become a thing of a forgotten past in this country. Education, again, will only be available to the rich.

Industry and infrastructure? For all these years, not a single aircraft, sea or river vessel was built - with the exception of military boats. Not only the aerospace industry, which was once the pride of the country, but also the automotive industry, shipbuilding, mechanical engineering - all of them have been destroyed. The remains of even more or less efficient enterprises do not even allow Kiev to be sold to the same Chinese. The West (and, above all, the United States) is firmly following the course of the complete and final de-industrialization of Ukraine. This process will be completed, perhaps, even before the expiration of the next decade.

Most likely, Ukraine will have to completely transform itself into an agrarian and raw material appendage of "civilized countries", finally losing even the semblance of economic independence. However, this is not surprising - after all, the country owes the IMF and other creditors absolutely fantastic amounts, absolutely incomparable with its GDP, which has been steadily falling from year to year. The exchange rate of the national currency (hryvnia) for the period since 2014 has "collapsed" by more than 350% - from 8 hryvnia per dollar to 28 (at the moment).

At the same time, international creditors have recently been increasingly denying Kiev in regular financial handouts, demanding that more and more new requirements be met. Nobody intends to forgive debts, so the prospect of default for the "square" is not even a matter of a decade, but, most likely, of the very near future.

The armed conflict in Donbass is in a “frozen” stage, continuing to split the country and stimulating its authorities to spend military expenses that are absolutely unaffordable for the budget. Not wanting to listen to the voice of reason, the powers that be, regardless of their own party affiliation and their previous election slogans, follow the agenda imposed by the aggressive nationalist minority, deepening and exacerbating the division in society. The country is adopting more and more new laws aimed at infringing the rights of its Russian-speaking residents, as well as ousting the Russian language and culture.

Taking into account the current “centrifugal” trends in the country's political life, the steadily deteriorating state of its economy, destructive processes in the social sphere, the continuing fragmentation of society along a number of signs, it is impossible to speak with confidence even about the existence of Ukraine in 10 years as a single unitary state.

Well, and as far as her hyper-breakthroughs and other pseudo-successes in any areas are concerned - either people with the most violent imaginations or extremely irresponsible politicians can talk about them.