Critical line of "Admiral Kuznetsov". Will the "umbrella" of the anti-missile defense system of our flagship cope with the reflection of the anti-ship missile attack? 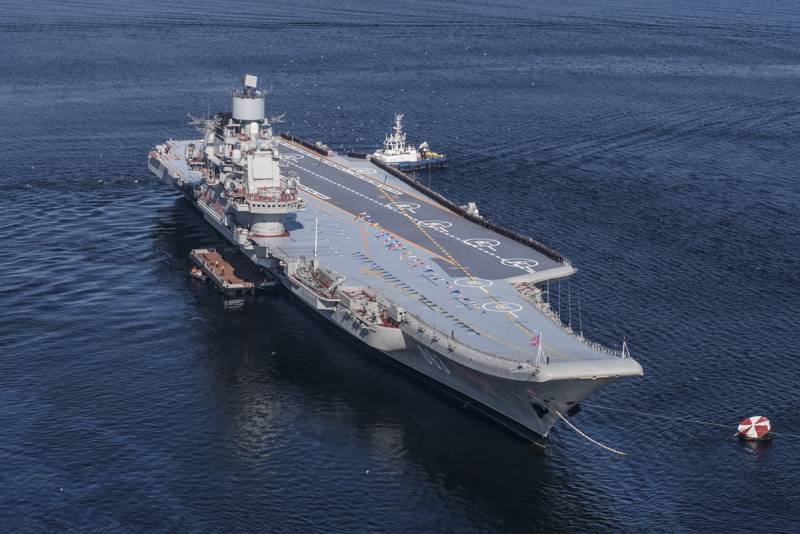 Undoubtedly, the program of re-equipment of the only heavy aircraft-carrying cruiser in the Russian Navy, pr. 2016 Admiral Kuznetsov, with promising shipborne anti-aircraft missile-artillery complexes M / "Club" once again strengthened us in the opinion that the current flagship of the Russian Navy in general and the Northern fleet in particular, the status of one of the most protected aircraft carriers in modern stories the Russian fleet and the naval forces of the member states of the North Atlantic Alliance.

First of all, this is the ability to simultaneously intercept 40 enemy air attack weapons at a distance of up to 20 km and an operating altitude of about 15 km with a total fire performance of about 100 targets per minute, while 8 combat modules ZRAK / ZRPK 3M87 "Kortik" (in combined with 4 "Daggers") provided a target channel of no more than 24 simultaneously intercepted air objects (one channel for each BM "Kortik") and a firing capacity of no more than 85-90 "processed" targets per minute. The lower target channel and fire performance of "Kortikov" (in comparison with "Pantsiri-M") is due to the presence in the electronic architecture of the first obsolete guidance radars with parabolic antenna arrays (they have only one target channel and less high noise immunity of the receiving path), as well as command modules / combat control modules with less high-performance on-board computers.

Secondly, the minimum effective reflecting surface (EOC) and the maximum speed of targets detected, tracked and captured for "precise auto-tracking" by means of the 1PC2-1 "Helmet" guidance radar are about 0,03 sq. m and 1000 m / s, respectively, which will provide Pantsirim-M with the opportunity to work very effectively on such complex objects as the stealth long-range anti-ship missiles AGM-158C LRASM, as well as long-range 2,3-fly anti-radar missiles of the AGM-88E AARGM type ...

As you know, the maximum speed of targets intercepted by the "Kortik" air defense system did not exceed 500 m / s (1,47M at sea level), which did not provide the "umbrella" of the "Admiral Kuznetsov" air defense missile defense system with the possibility of repelling a massive anti-radar strike using HARMs and their a radically improved modification with the AGM-88E AARGM index. As for the minimum RCS intercepted by means of "Daggers" air attack means of the enemy, it is about 0,05-0,07 square meters. m, which may not be enough to work with such promising stealth anti-ship missiles such as the AGM-158C LRASM, the Norwegian NSM or the Japanese supersonic ASM-3. In the same turn, the television-optical sighting module "Kortika" can partially compensate for the technological shortcomings of the guidance radar only in favorable meteorological conditions, when the coefficient of meteorological range of visibility (MIR) is more than 2-3 km.

Thirdly, the elevation sector of the view of the 1PC2-1 "Helmet" guidance radar of the Pantsir-M complexes ranges from -5 to +82 degrees, which, under normal meteorological conditions, makes it possible to intercept complex supersonic EHV (anti-radar, tactical cruise and aeroballistic missiles) attacking the carrier ship in a vertical dive mode at angles of 75-80 degrees at the terminal segment of the trajectory.

And finally, fourthly, the maximum flight speed of the 57E6E anti-aircraft missiles of 1300 m / s will provide the advanced anti-missile brainchild of the Tula KBP with the ability to intercept the aircraft-carrying cruiser of high-speed elements of high-precision weapons enemy (on countercrossing courses), and those air attack weapons that are launched at other friendly surface ships in the considered AUG order (in this case, a successful interception of a 1,5-2-fly target can be carried out in pursuit / into the rear hemisphere, on that the SAM 3M311 / -1 complexes "Kortik / -M" are not capable).

At the gates of radical modernization. The main disadvantages of "Pantsirey-M"

Meanwhile, the specialists of the Tula KBP (developed by KZRAK "Pantsir-M"), as well as JSC "Corporation" Fazatron-NIIR "and JSC" RATEP "(involved in the development and modernization of the" Helmet "guidance radar and the 10ES1 turret optoelectronic complexes -E, as well as the hardware and software update of the "Pantsire" combat information and control systems in the ship and ground modifications) is still too early.

So, the use of a standard radio command guidance system of the 57E6 missile defense system (requiring continuous line-of-sight between the targeting means of the Pantsirya-M combat module and the target until the initiation of the warhead of the 57E6 missile defense system), as well as maintaining the standard inclined configuration of the placement of transport and launch modules (a- for "Kortik-M") will reduce the total target channeling and fire performance of the "anti-missile umbrella" "Admiral Kuznetsov" by about 2 times in the event that the likely "star raid" of low-altitude anti-ship missiles of the enemy will be carried out only from one of the most missile-dangerous air directions.

Why? The rear sectors of the review of the "Helmet" guidance radars and the 10ES1-E optoelectronic modules, as well as the firing zones of the transport-launch "tubes" of the three Pantsir-M combat modules, located on the side balconies (below the flight deck) of one of the two side projections of the "Admiral Kuznetsov" are still covered by the "screen" of the board and other structural elements of the aircraft-carrying cruiser. Consequently, the interception of targets in the most missile-dangerous direction can be performed only by those three BM "Pantsir-M", the placement side of which is directed in the direction of the expected anti-ship strike.

The following technological solutions would contribute to solving this problem.

Firstly, the re-equipment of the Pantsir-M with promising missiles with active radar seeker, allowing to intercept enemy air attack weapons on target designation from general ship radars and Shlem targeting radars of those Pantsir-M combat modules, the side of which is facing a probable threat ...

Secondly, the implementation of the vertical launch of the new missile defense system according to the principle a la "CAMM-ER" (promising British missile defense system), which will ensure its access to a safe maneuvering height (beyond the level of the superstructure elements and the mast architecture of the aircraft carrier), and then a multiple reduction in time its inclination towards the target by means of the gas-jet thrust vector deviation system.

Ctrl Enter
Noticed oshЫbku Highlight text and press. Ctrl + Enter
We are
In anticipation of a crown attack on Perseus and LRASM. Umbrella of the Northern Fleet missile defense will get a new breathUSA - China: a new deterrence strategy
Military Reviewin Yandex News
Military Reviewin Google News
53 comments
Information
Dear reader, to leave comments on the publication, you must sign in.