The Baltics are getting ready. Will Latvia be able to become a springboard for the invasion of American special forces into Russia? 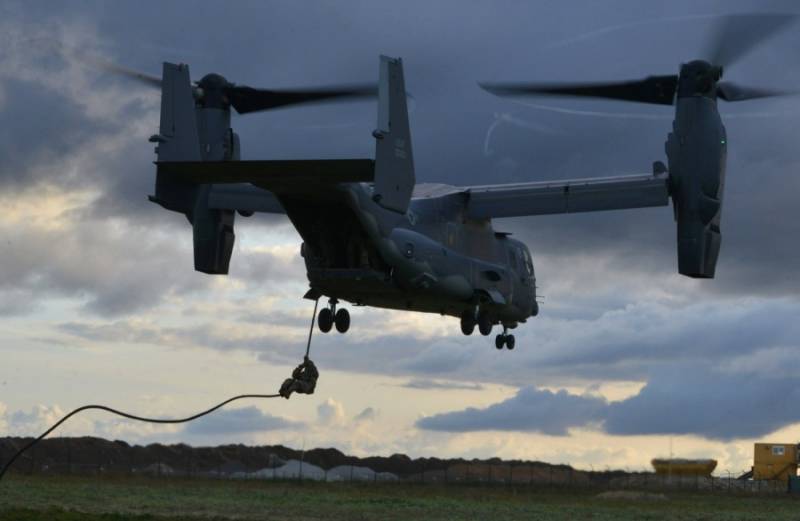 As part of the European Containment Initiative, a portion of the US military has once again appeared in Latvia. This time, they settled on a small special operations force base, which cost the Americans only $ 3,7 million.

The base consists of two helipads, a technical service and an ammunition depot. It is expected that both classic helicopters and CV-22 tiltrotors from the 352nd wing of the US Special Forces, which have already become regulars of the Lithuanian bridgehead, will be received on the territory of the strongpoint.

The main purpose of the deployment of a new military facility in the Pentagon is traditionally considered a growing "threat" from Russia. The Americans have not forgotten about the friendly rhetoric towards Latvia.

"This project, along with other important European defense initiatives, represents our continued commitment to our friend and ally Latvia." 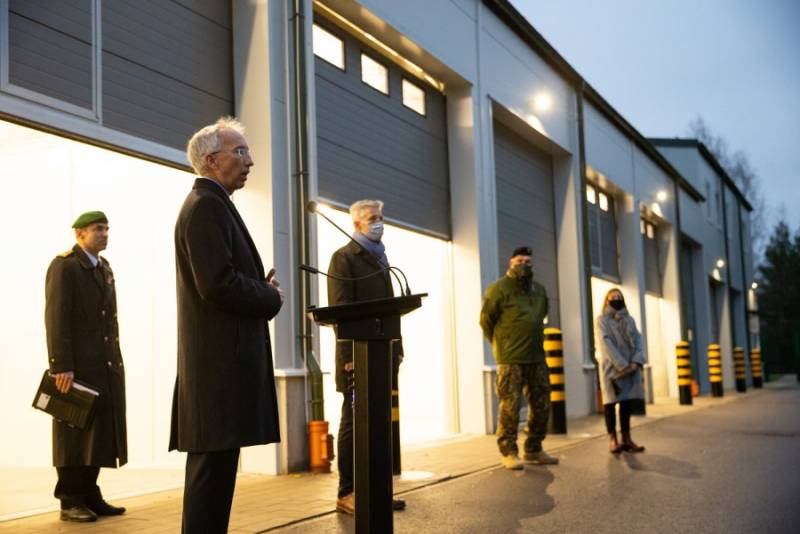 Representatives of the US Embassy in Latvia and Latvian military leaders officially opened a new Pentagon special operations facility in Riga at the end of November 2020. Source: stripes.com
It is worth noting that the construction of nearly four million military base is just a drop in the sea of ​​the huge budget set by the Pentagon for the implementation of the European Containment Initiative. In total, from October 2020, the Americans will spend about $ 3,8 billion over the course of the year on "containing" Russia. In the previous fiscal years, the Baltic countries had already received several hundred million from the budget of the containment initiative.

Placing a jump base for an army aviation US Special Forces forces pose a potential threat to Russia. Some commentators, for example, on the vz.ru portal, are seriously considering the dagger strikes of American specialists deep into Russia.

No matter how the US command assures us, the deployment of CV-22 Osprey tiltrotors and related infrastructure in Latvia is a typically aggressive maneuver. Most of the amphibious operations are offensive.

The base in Latvia in this case will be a rear support point, from which the fighters will go to the combat area and return to replenish fuel, personnel and ammunition. An option is being considered when several tiltrotors, on low level flight, break through tactical air defense on the Russian border and land troops in the rear.

In the event of aggravation of relations between Moscow and Washington, such sabotage and intelligence groups, according to the authors, can really do a lot of things. Suffice it to recall how many nuclear power plants and other particularly important facilities are in the European part of Russia. With a combat radius of 590 km CV-22 Osprey can feel quite free in the rear of a potential enemy. By the way, from Riga to Pskov a little less than 300 km.

Let's leave on the conscience of analysts such a potential for the development of the situation with the US special forces bases in Latvia. After all, Russia is not a third world country into which one can throw DRGs with impunity without paying attention to air defense. Whether the Osprey's fuselage is at least three times composite (this is the argument that analysts use when explaining the mechanism of air defense breakthrough), the motors radiate heat and are completely captured by the missile homing heads. This is without taking into account the tiltrotor propellers of considerable diameter - an important unmasking feature of an aircraft.

And that, in the end, this can be carried from weapons special forces with them to disable strategic facilities in the depths of Russia?

Despite all these arguments, the fact remains that a new base for overseas special forces has appeared on the territory of Latvia. Is the Pentagon really wasting efforts on an unpromising project in advance, which, in the event of an aggravation, will become just another target for the Russian Aerospace Forces?

Everything is not so simple and the United States has calculated all the risks very accurately.

For the first time in the United States, the presence of soldiers of its own special forces in the Baltics was officially recognized in 2017. Then ten specialists were assigned to each of the three countries. At one time the Americans assured the leaders in Riga, Vilnius and Tallinn of the secrecy of the mission, but at one fine moment the whole world learned about it from the state newspapers.

Over time, the aforementioned tiltrotors used by the US Army for the Marine Corps and special forces arrived at the base in Estonian Amari. Ivan Konovalov, director of the Center for Current Politics, commented on the situation three years ago:

“Under the slogans of solidarity and support of their NATO partners in the Baltics, the Americans are solving utilitarian tasks. One of the main features of the training of American special forces is training in different theaters of war. Today, the Special Operations Forces are carefully examining the unfamiliar Baltic theater of military operations, it is possible that all special forces, including aviation, will be driven through it on a rotational basis.

So, the first reason for the appearance of US special forces in the Baltics is a large-scale training of personnel in unfamiliar terrain.

It remains only to find out how the Baltic theater of operations differs from everything else so unique, which requires many years of deployment of special operations forces. You can treat this interpretation in different ways, but other options cannot be discounted. 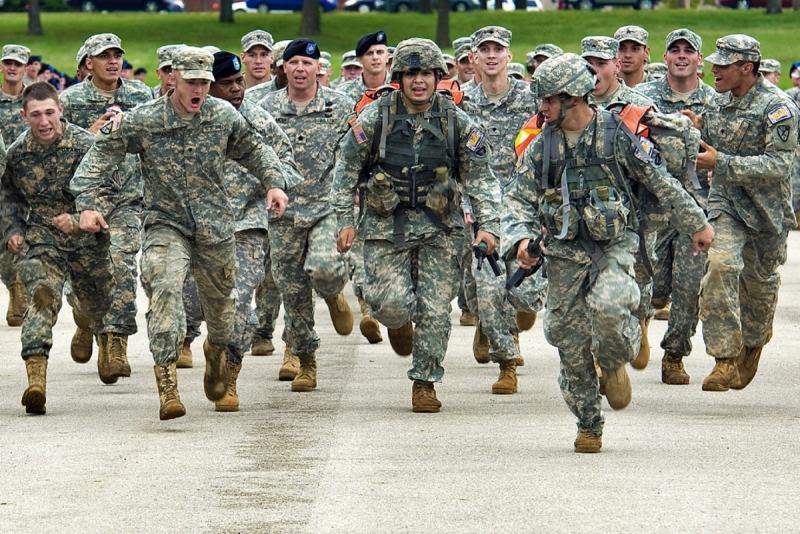 The version with specialist instructors from the USA looks much more believable. In fact, the Baltic states are not of particular interest to the Pentagon special forces. Training saboteurs from the Lithuanian, Latvian and Estonian military looks like a much more tempting idea.

On the one hand, it is much easier to persuade the leadership of the Baltic countries to place special forces instructors, and, on the other hand, it is never superfluous to have trained local thugs for the Pentagon at the Russian borders. In the event of a hypothetical NATO (Baltic) -Russia conflict in the rear of the advancing Russian army, there will always be modern analogues of the “forest brothers”.

But even this version looks like only a cover for the true strategy of the United States.

The Baltic countries, on the one hand, are lucky - a mild coastal climate, proximity to world transport routes and a European location. On the other hand, it is the Baltics that are almost the epicenter of the system of American confrontation with Russia.

Briefly about American strategy. Several years ago, the head of Stratfor, George Friedman, at the Chicago Council on Global Issues, recalled the concept of Intermarium, which was previously authored by the Polish leader Józef Piłsudski.

The countries connecting the Baltic and Black Seas should become a kind of "sanitary corridor" between Western Europe and Russia. Particular emphasis is placed on the demarcation of Germany and Russia, since German capital and technology, combined with Russian natural resources and labor, is an invincible combination for the United States. By creating a kind of "controlled chaos" in the "Intermarium" and constantly provoking Russia, the Americans hope to get their way over and over again.

The Baltic states have nothing to do in their pathological fear of the mythical "Russian aggression" - the Europeans refused to help in the matter of militarization, and the Pentagon agreed. It can be assumed that sober minds in Vilnius, Tallinn and Riga understand the flawed nature of Russophobia and simply make money on the American presence in the region. After all, less defense spending and a lot of Pentagon-built infrastructure.

The deployment of a special operations forces base in Latvia is nothing more than an attempt to save money. The budget for the European Containment Initiative has shrunk this fiscal year from a record $ 6,5 billion to $ 3,8. The quite low-budget base turned out to be quite in line with the fight against unnecessary spending.

Building a couple of hangars and helicopter pads is much easier than placing an armored division. And the goal, in fact, has been achieved - in Riga they are satisfied with the results of cooperation and "controlled chaos" is kept in good shape.

The main thing is that commentators in Russia should escalate the situation less with mythical raids of American special forces deep into the country.

Ctrl Enter
Noticed oshЫbku Highlight text and press. Ctrl + Enter
We are
Situational analysis of the death of the MH17 flight (Malaysian Boeing 777), made on the basis of engineering analysis from 15.08.2014Republic of the former USSR. Latvia: years without “occupiers”
Military Reviewin Yandex News
Military Reviewin Google News
64 comments
Information
Dear reader, to leave comments on the publication, you must sign in.