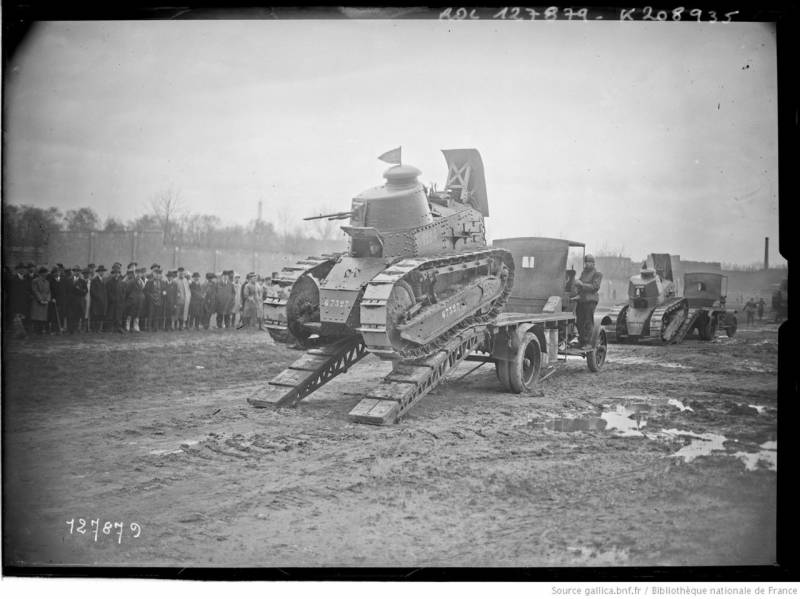 Renault FT tank of the French army. The Turkish army began with such machines. Photo of the National Library of France

During the First World War, a certain number of armored vehicles were in service with the Ottoman Empire, but Tanks were absent. In the twenties, the newly formed Republic of Turkey began building a modern army in general and tank forces in particular. With the help of foreign countries, it was planned to create a fundamentally new type of military with special capabilities.

The Turkish army received its first tanks in the twenties, and different sources give different dates. According to some sources, the Ottoman Empire signed a treaty with France in 1921, literally a year before its final collapse. Other sources cite 1928, and the customer was the authorities of the new Republic.

The subject of the Turkish-French treaty was a company set of Renault FT light tanks. By French standards, the company consisted of three platoons of five tanks each - three cannon platoons, incl. one commander and two machine-gun. There was also a reserve of five tanks and support platoons. Thus, Turkey received only 20 imported tanks.

Some of these vehicles (according to other sources, all) were transferred to the Infantry Artillery School in Maltepe near Istanbul. Its specialists were to study armored vehicles, master its operation, and also develop methods of combat use. In the future, all this experience was to be used when choosing new tanks and the formation of full-fledged combat units. 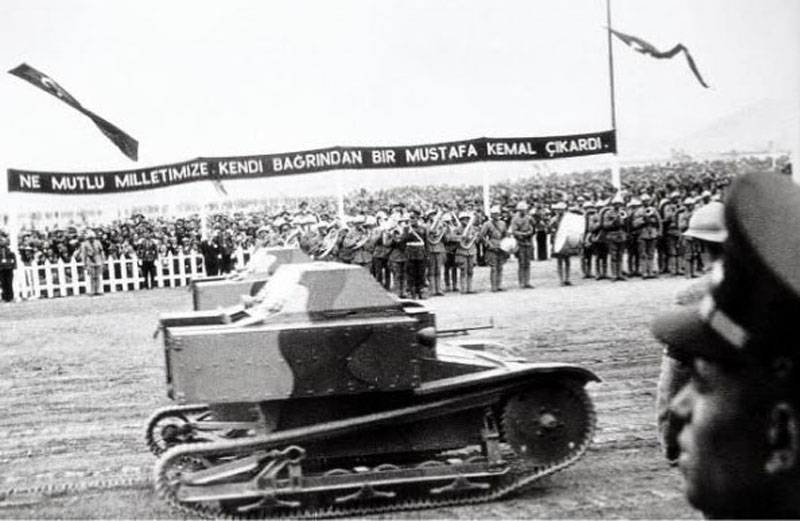 Imported Carden Loyd wedges. Photo Tankfront.ru
In the twenties, the Kurds organized several uprisings in different parts of Turkey, and the authorities brutally suppressed them with the army. All available means were used, but not tanks. As far as is known, Renault armored vehicles remained at the infantry school as training and were not involved in combat operations.

At the turn of the decades, Turkey was developing relations with the UK, which, among other things, led to fruitful cooperation in the military-technical sphere. In the early thirties, supplies of various weapons and equipment started, incl. a certain number of British-made tanks.

At the very beginning of the decade, the Turkish army received approx. 30 Carden Loyd tankettes. In 1933, at least 10 Vickers 6-ton light tanks were delivered to the customer. After that, an order appeared for a number of Vickers-Carden-Loyd floating tankettes, and by the end of the decade, at least 12 light Vickers Mk VIs were purchased. 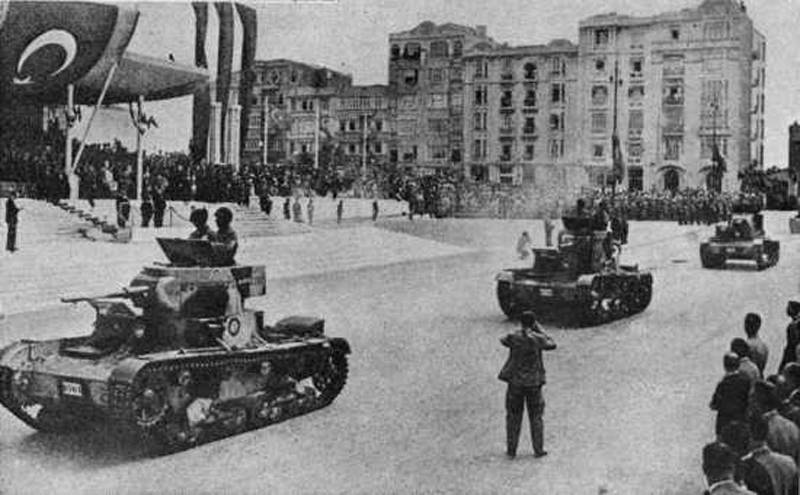 T-26 at the parade. Photo Tankfront.ru
Several dozen light tanks and tankettes of British production were distributed among the combat units of the ground forces to strengthen the infantry and cavalry. The technique was regularly involved in exercises to gain experience. Apparently, some of the tanks and tankettes took part in the suppression of the Kurdish uprisings. However, despite all efforts, up to a certain time the potential of such tank forces was limited for a number of reasons.

In the early thirties, Turkey again began to move closer to the USSR, which led to mutually beneficial agreements. The Turkish army wished to purchase a large batch of several types of Soviet armored vehicles. In 1934, tests and negotiations took place, after which an agreement appeared. Deliveries began the following year and didn't take long.

The Turkish army received 2 light T-26 tanks in a two-turret configuration and 64 single-turret vehicles. For each tank, depending on the modification, the customer paid from 61 to 72 thousand rubles. Turkey also purchased 60 BA-6 armored vehicles, which had the same armament as the single-turret T-26. It is noteworthy that the Soviet T-26 for several years became the most massive tank of the Turkish army, in the BA-6 it turned out to be its only modern armored car.

Some sources claim that not BA-6, but similar BA-3s, went to Turkey. In this context, there are still discrepancies, and the truth has not yet been established. Foreign literature mentions the delivery of several light tanks BT-2, a pair of medium T-28. However, this information is not confirmed by Russian documents - such equipment was not sold to a foreign army. 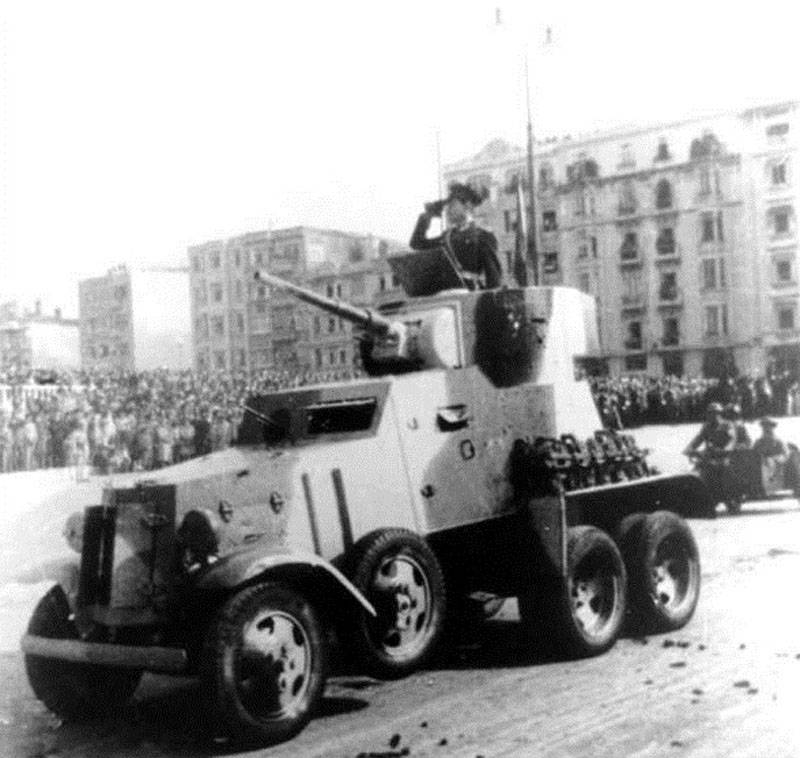 Armored car BA-6. Photo Tankfront.ru
The 26st Tank Battalion was formed specifically for the operation of the new T-3s as part of the 1rd Army, based in the city of Luleburgaz near Istanbul. The first commander of the unit was Major Takhsin Yazidzhy. The battalion received all the purchased Soviet tanks and a number of armored vehicles. The remaining BA-6s were distributed among the cavalry divisions.

In 1937, in addition to the 1st tank battalion, the 1st armored brigade was formed as part of the 1st army, based in the Istanbul region. She was given a significant part of the available armored vehicles of various types. In addition, new purchases of foreign equipment were planned.

In the same year, military-technical cooperation with Czechoslovakia began. The countries have agreed to supply more than 500 tractors and artillery tractors of various models. Czechoslovak tanks, considered one of the best in the world, did not interest the Turkish military. It is curious that the execution of this contract lasted until 1942-43. Having occupied Czechoslovakia, Hitlerite Germany did not interfere with factories from earning money for it.

At the very end of the thirties, the army began to form a new unit. The 1st separate tank regiment began service in 1940. It was for this regiment that British Vickers Mk VI tanks were intended. In addition, 100 Renault R-35 tanks were bought from France. Two lots of 50 pcs. each arrived to the customer in February and March 1940, and known further events did not interfere with deliveries. 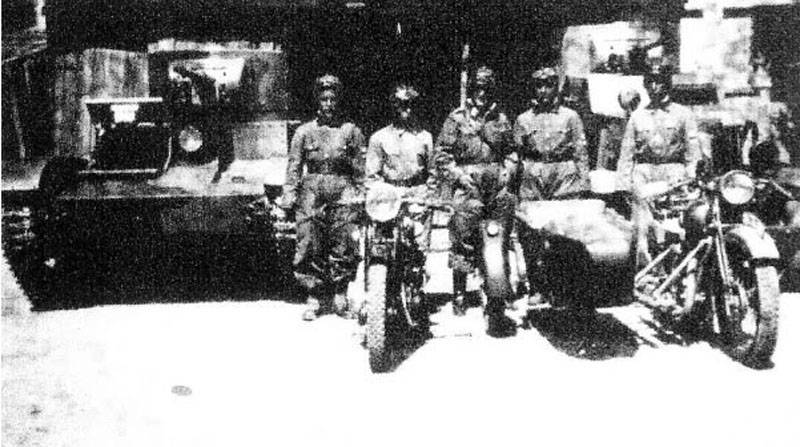 Soviet equipment and Turkish soldiers. Photo Tankfront.ru
Thus, by the middle of 1940, the Turkish army had three armored formations - 1st battalion, 1st regiment and 1st tank brigade. A separate battalion at that time operated only 16 T-26 tanks and the same number of BA-6 armored cars. The 1st Panzer Regiment used Vickers Mk VI and R-35 tanks, and the brigade had almost all types of equipment in service.

Against the background of the war

During World War II, Turkey adhered to neutrality, which did not prevent her from cooperating with the belligerent countries. Using their position, the Turkish authorities tried to get the greatest benefit, incl. in the military-technical sphere. At the same time, the organizational and staffing structure of tank units was being improved.

In 1942, the tank brigade was transferred to Istanbul. Soon after, the equipment was revised, and the oldest samples were written off. During this period, Soviet T-26s were removed from service, which were considered morally obsolete. Then they formed two new brigades, and they received the numbers "1" and "2", and the existing one was renamed into the 3rd.

1943 holds a special place in the early stories Turkish tank forces. During this period, two coalitions fought for Turkey's attention, incl. due to the supply of materiel. So, Germany handed over to a potential ally more than 50-55 Pz.Kpfw.III medium tanks, 15 Pz.Kpfw.IV Ausf.G tanks and other equipment. Britain and the United States responded by supplying their own armored vehicles. In the shortest possible time, the Turkish army sent 220 light tanks M3, 180 infantry Valentine, 150 light Mk VI and 25 medium M4. Together with them, 60 Universal Carrier armored personnel carriers, self-propelled guns, etc. were transferred. 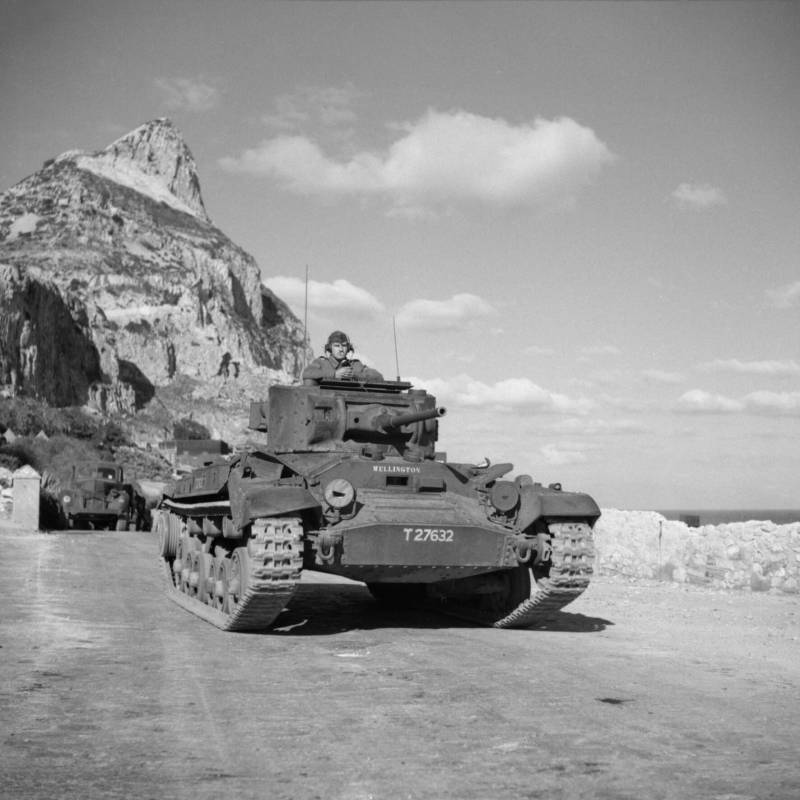 British tank Valentine, 1942. Such vehicles will soon be handed over to Turkey. Photo Imperial War Museum
Hundreds of new imported armored vehicles of a number of basic classes made it possible to fully equip two newly created tank brigades, as well as partially re-equip already existing formations and units. All this led to the quantitative and qualitative growth of the Turkish tank forces.

On the eve of a new era

By the end of World War II, the Turkish army had three armored brigades using modern foreign technology. The total number of tanks exceeded 650-700 units. Just two decades earlier, in the late twenties, Turkey had only a couple of dozen obsolete tanks used as training tanks. Thus, significant progress has been made. However, such results would have been impossible without foreign aid.

Against the background of the outbreak of the Cold War between the United States and the USSR, the Turkish leadership chose its own political course, which had a noticeable impact on the further development of the armed forces. Army building, incl. tank troops continued through supplies from abroad. Soon, Turkey switched to American tanks that were relevant for that time, some of which are still in service today.