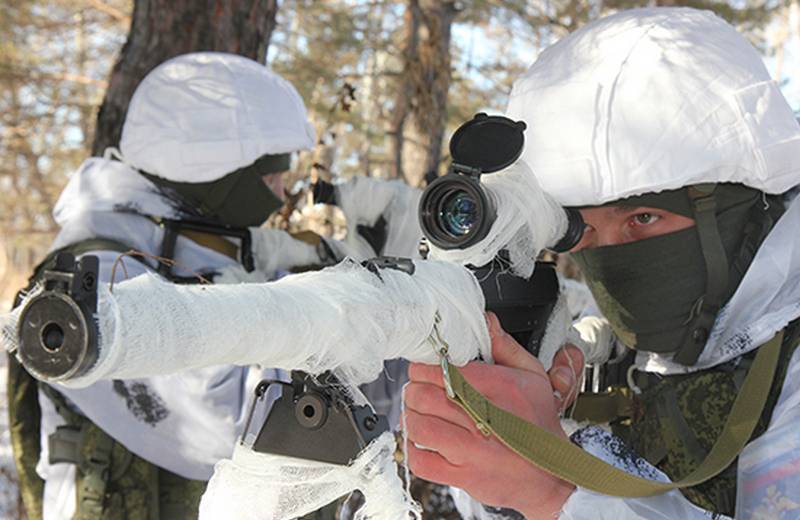 
As noted, this is the first batch of ASM "Val", which entered the combined arms army stationed in the Amur region. After sighting weapons scouts will begin the winter training phase with new assault rifles.

The new special 9 mm assault rifle is designed for silent firing at a range of up to 400 meters. It differs from the previous version in improved ergonomics, the presence of a new day and night vision sight, an increased magazine with an ammunition load of up to 30 rounds. It is also worth noting the convenience of using the new machine gun with the appearance of bipods and unified Picatinny rails for attaching various devices that increase shooting capabilities
- said in a statement.

It was reported at the beginning of July last year that the Tula Arms Plant (TOZ) began mass production of the modernized VSS Vintorez sniper rifle, designated VSSM, and the modernized special AS Val submachine gun, designated ASM. After that, the modernized weapons began to enter service with parts of the Russian army.

AC (special assault rifle) "Val" is developed on the basis of VSS "Vintorez" and is 70% unified with the rifle. The 9 mm assault rifle is designed for silent shooting at a range of up to 400 meters (sighting). It is considered one of the most accurate and reliable samples of special small arms in the world for special forces.
Ctrl Enter
Noticed oshЫbku Highlight text and press. Ctrl + Enter
We are
Upgraded BCC "Vintorez" and AS "Val" went into seriesKalashnikov rifle
Military Reviewin Yandex News
Military Reviewin Google News
14 comments
Information
Dear reader, to leave comments on the publication, you must sign in.