She flies, but how beautiful is that?

December 17 2020
165
So, the heavy "Angara" successfully started, judging by Rogozin's tweets, rather in spite of than anything else. But - it is definitely worth rejoicing for several reasons at once, which we will now consider. 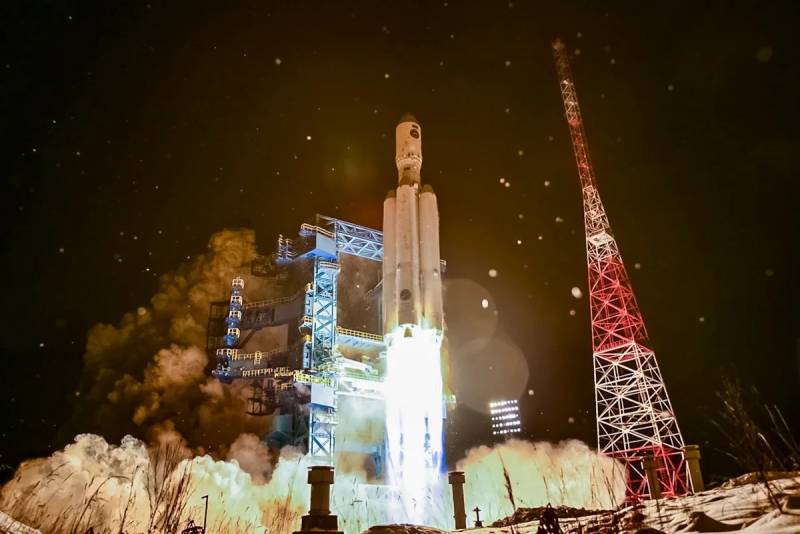 Source: roscosmos.ru
The second and successful launch of the rocket was perceived even too enthusiastically, but this is not from a good life.

Let's start by giving ourselves an answer to the question: what is a heavy launch vehicle, and is it really needed.

In our age of rapid miniaturization of everything, satellites also become smaller. In this connection, both the Americans and the Chinese are already launching them into orbit in batches. Communication, internet, weather monitoring - all this is common and commonplace.

What about a heavy rocket?

But with heavy missiles, the situation is completely different.

On the one hand, a large rocket means big problems and even more money, but a heavy launch vehicle is, first of all, deep space and spacecraft in geostationary orbit. Therefore, if someone only needs their own satellites in orbit, welcome to the sector of light carriers, and whoever wants to fly far or equip a space station in orbit, then there is no way without heavy equipment.

And to put such large satellites or space station elements into stationary orbit, heavy carriers are needed. Moreover - for flights to other objects of the solar system.

Upper stages, a large supply of fuel for acceleration and maneuvers are the main components of success. The upper stage and the spacecraft itself account for up to 30% of the mass, the rest is fuel.

Here's the conclusion: heavy rockets are needed to operate in a stationary orbit with large objects and fly over considerable distances in deep space.

True, today there is a lot of talk about the fact that it is realistic to put the necessary equipment into orbit with the help of several launches with light launch vehicles, assemble it in orbit, and then launch along the planned route.

All this, in general, is more reminiscent of the fantasy of the "close-range sight", because the "assembly shop" in orbit is, of course, beautiful, but as the practice of today shows, astronauts are not always able to replace the solar battery on the ISS, then what to say about modular assembly of a deep-space aircraft?

Not only is it difficult and daunting to work in space, but also the maneuvers and docking themselves require a breakthrough of fuel. Plus, the reliability of such a system will also drop in direct proportion to the number of starts. And God forbid, if one of the launches in the chain fails. It is clear that the entire space construction will stop until duplicate modules are made.

So multi-launch systems in our time and with our level of technology are still very risky. And here all the hope is precisely on heavy launch vehicles, which are still the future of long-range flights.

It is quite natural that all (or almost all) space powers have heavy launch vehicles in their arsenal. And some even have super-heavy ones.

China has been using Changzhen-5 for a long time, which will output up to 25 tons, and in the future, Changzhen-9, which, according to some information, will have a carrying capacity of 30 to 32 tons.

And only we actually had a big gap in this regard. The main heavy LV in Russia remained the Proton, developed in the 60s of the last century. Yes, the Proton was modernized several times, but the fact that it flew on the most perfect poison made it a constant target of attacks from environmentalists.

Quite rightly, by the way, since the whole world has long abandoned a mixture of asymmetric dimethylhydrazine and nitric tetroxide.

As a result, after "only" 55 years of use, the "Proton" was abandoned. But a refusal is a refusal, and what can replace it? Well, "Angara". Not a record PH, but it exists and it flies.

I would very much like it to fly not in spite of, but because. And the launch of the "Angara" is not a single action, but the rocket can be fired regularly and, most importantly, there will be work for it. That is, military satellites, ships, interplanetary stations.

But even when all six successful test flights of the Angara-A5 are over, a lot still needs to be done for normal operation.

To begin with, the heavy "Angara" needs a normal cosmodrome. Plesetsk is not bad, but for satellites launched into polar orbits, when there is no need to fight the Earth's rotation. But in order to launch into a geostationary orbit, then on the contrary, the closer to the equator, the more the planet itself helps with its rotation.

Well, everyone has already understood - Vostochny ... I don't want to comment on the affairs at this cosmodrome yet.

The second problem. Ship. The fact that the Soyuz has nothing to do at long distances (we are talking about the same lunar program) is understandable. It seems that there is "Eagle", aka "Federation", for which there is no launch vehicle yet. For the launch of the "Eagle" into space, "Rus" was planned, work on which was stopped. It is necessary to "sharpen" the "Angara" specifically for the "Eagle", which will take quite a lot of time.

So having a severe ROP is not even half the battle. The lack of a launch pad at the proper latitudes and the lack of a manned spacecraft do not look optimistic.

Yes, in the announced plans of Roscosmos there is a test launch of the "Eagle" on the "Angara-A5" at the end of 2023, already from the new launch pad at the Vostochny cosmodrome. And an unmanned flight to the ISS in 2024 and manned in 2025 ...

All this is good, and it would look just fine, if not one small nuance: these are the promises of Roscosmos. A corporation that is doing well with promises, but with performances ...

In general, as many of us said about Elon Musk's projects: when it flies, then we'll talk.

Moreover, with the lunar program, everything is not as smooth as we would like. The flight program, which was again announced by Roskosmos, is a multi-launch program using four Angara-A5V missiles with a cryogenic booster and three rendezvous: two in near-earth and one in near-lunar orbits.

Cumbersome schemes with multiple docking and assembly in orbit, as mentioned above, are not reliable. Plus, they are fuel-intensive.

Among other things, the most important thing is missing: the mentioned cryogenic booster unit. It still needs to be developed, built, tested ...

The Chinese, however, are going the same way. They also have a system of four Changjeen-5 launches, which has the same carrying capacity as the Angara. But the Chinese are working rapidly on Changzhen-9, which will have to solve all the problems associated with long-distance flights.

Well, if in the USA they successfully fly around their SLS carrier rocket, then they generally have no problems, since the SLS will put into orbit from 95 to 130 tons in one launch.

Moreover, we do not have to wait so long for the moment when SLS starts. 2021-1 is generally not far off ...

In general, all hope is for the very cryogenic stage that has yet to be developed.

Everything is very damp and uncertain. However, as usual with us. But the successful launch of the Angara can be viewed as a kind of ray in the darkness. At least, although we do not have a place in the market for commercial launches of heavy LV, but in 2025, when the Protons will finally go to history, they are replaced by a real and flying rocket.

It is very good.

It is possible with the same rocket to launch automatic stations for flight to the Moon and other celestial bodies.
The fact that "Angara" successfully flew, I repeat, is a ray of light in the darkness of outer space. But in order for the ray to turn into a ray that disperses the darkness, you need to work and work. Without being distracted by various nonsense.

Our Chinese competitors say that the journey of a thousand li starts with one step. Well, let the second successful launch of "Angara" become the same step for the Russian space.