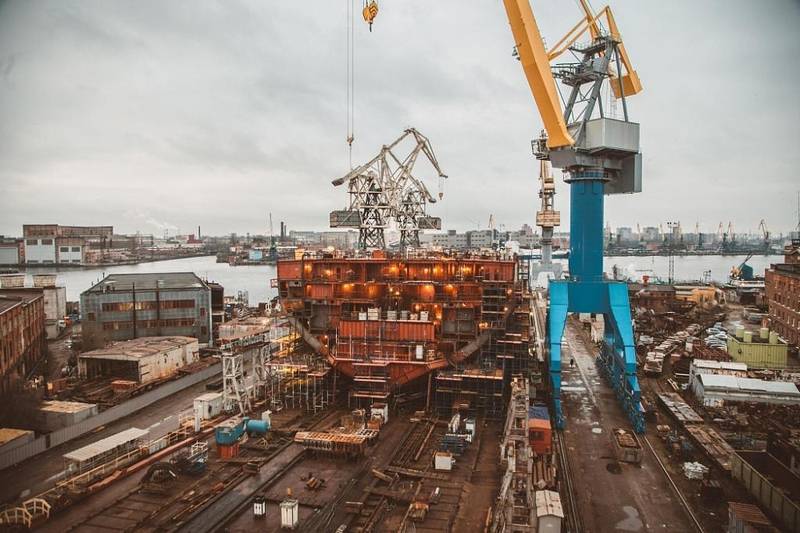 Archival photo of the construction of the lead icebreaker "Arktika"

The fourth serial universal nuclear icebreaker of project 22220 of the "Arctic" type was laid down in St. Petersburg. The ceremony took place at the Baltic Shipyard, the press service of the Shipyard reports.

The Baltic Shipyard has laid the foundation stone for the next nuclear-powered icebreaker of project 22220, already the fifth in the series and the fourth serial. The vessel, named Chukotka, will be built taking into account new technical solutions tested during tests on the lead icebreaker of the series, Arktika.

It is planned that the third serial icebreaker Yakutia, which was laid down in May, will be delivered to the customer in 2024, and the Chukotka in 2026.

At present, the lead icebreaker of the Arktika series has been handed over to the customer and is already operating in the North. Laid down in 2015, the first serial icebreaker Sibir is to be delivered to the customer in 2021, the second serial Ural, launched in 2016, in 2022. Both are being completed afloat.

A feature of the project 22220 icebreakers is the use of variable draft using ballast tanks. Double-draft ships can operate both in deep water and in shallow water in river beds, breaking through ice up to 3 meters thick without losing speed. According to the design data, the new icebreakers are the largest and most powerful in the world.

Ctrl Enter
Noticed oshЫbku Highlight text and press. Ctrl + Enter
We are
The third production icebreaker of project 22220 laid in the Baltic ShipyardLaid the keel of the first Soviet-era icebreaker with a capacity of 25 megawatts
Military Reviewin Yandex News
Military Reviewin Google News
23 comments
Information
Dear reader, to leave comments on the publication, you must sign in.