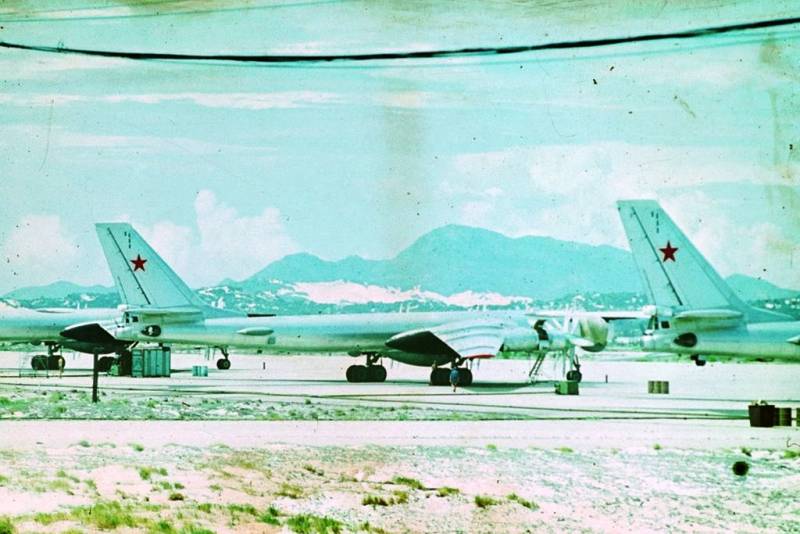 A mighty oceanic fleet, a developed air force, powerful ground forces ... What's the use of all this, if all the armed forces of the state are tightly "locked" within its borders and, accordingly, can be used exclusively to repel external aggression after it has been committed ... For the Soviet Union, this state of affairs, of course, was unacceptable. It was because of this that his military outposts were located, in fact, all over the globe, in all parts of the world.


At the same time, it is necessary to separate the places of permanent deployment of significant contingents of the Soviet army and those strong points, without which long ocean voyages, transcontinental flights and the like would be impossible. Our country had a sufficient number of modern warships and aircraft capable of performing tasks of any complexity far from their native land, however, all of them needed such prosaic things as refueling, repairs and temporary basing points.

The USSR had the largest military groupings in the countries of Eastern Europe - the GDR, Poland, Hungary, Czechoslovakia, as well as in Asia - in Mongolia. Separate история was with a limited contingent of Soviet troops in Afghanistan, which was engaged in real hostilities. In other places, everything was more or less peaceful. For example, in Cuba, our military firmly established itself during the famous Cuban missile crisis. Then our ballistic nuclear missiles ended up there, which almost caused the outbreak of the Third World War.

Atomic weapon over time, they were withdrawn, but the GVSK - a group of military specialists of the USSR remained in Cuba. Due to its close proximity to the United States, it was used not only as a base for the naval fleet (ports of Havana and Cienfuegos), but also, first of all, as one of the outposts of electronic warfare against the main "potential enemy". It was painfully easy to intercept the staff of the Priboi communications center, which had very specific functions, built in the city of El-Gabriel.

Another object that made the US military command very nervous was the Vietnamese Cam Ranh, which, by the way, was at one time an American military base. The command of the American Pacific Fleet could only grind its teeth, seeing the port, which could accommodate a dozen surface combat and support ships and 8 submarines. In addition to this, the Cam Ranh airfield received strategic bombers, not to mention fighter and reconnaissance aviation... With an area of ​​up to hundreds of square kilometers and personnel, whose number at different times ranged from 6 to 10 thousand people, it was a real outpost in Southeast Asia.

As a matter of fact, none of the places outside the borders of the USSR, where our pilots, sailors, signalmen and other "specialists" were quartered, was ever called a military base. The point here was the official Soviet ideology, within which this name was tightly linked to the "aggressive policy of the United States and NATO." Our facilities were named much more modestly - for example, points of material and technical support. This, however, in no way meant that such places were a couple of docks or hangars, where only technicians in filthy overalls scurried about. Not at all.

At various periods of time, PMTOs, mainly belonging to the USSR Navy, were present in the most remote and exotic parts of the planet. Seychelles (Victoria), Egypt (Alexandria, Mersa Martuh), Libya (Tripoli and Tobruk), Syria (Tartus and Latakia) ... The Black Continent and the Arabian Peninsula were not badly "covered" - our military facilities operated in Angola (Luanda ), Ethiopia (Dahlak), Guinea (Conakry), Tunisia (Sfax and Bizerta), Yemen (Aden and Socotra).

Today, alas, little is left of this list. Almost nothing. It's time to regain the lost ground.

And the increasingly frequent talk about the need for Russia to return to itself, if not all, but at least some of the foreign military facilities have every reason. Without distant outposts, our country is unlikely to be able to claim the status of a serious geopolitical player in the future.

And a new step in this direction has been taken. We are talking about an agreement with the Sudanese authorities on the deployment of a Russian naval logistics center on the shores of the Red Sea.

It is clear that today Russia a priori does not have the military and financial resources that the USSR had, and therefore it is unrealistic (and hardly advisable) to "scatter" bases (or the same MTO points) around the world, but the appearance of such in strategically important points of the world - an option that clearly cannot be neglected.

Ctrl Enter
Noticed oshЫbku Highlight text and press. Ctrl + Enter
We are
About Stalin and KhrushchevWhat you didn't want to know about England
Military Reviewin Yandex News
Military Reviewin Google News
155 comments
Information
Dear reader, to leave comments on the publication, you must sign in.