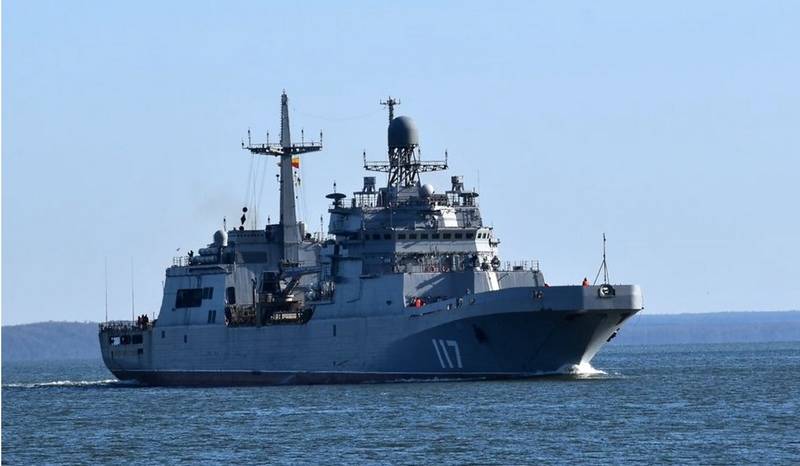 Project 11711 large landing ship (BDK) "Pyotr Morgunov" became part of the Naval fleet... The solemn ceremony of raising the Andreevsky flag took place in Baltiysk. This is reported by the Ministry of Defense.


The ceremony was attended by representatives of the command of the Russian Navy, the Baltic Fleet and the Baltic shipyard "Yantar". The first serial project 11711 large landing craft was handed over to the Navy and will go to serve in the Northern Fleet, where the lead ship of the series, the Ivan Gren large landing craft, is already in service.

The completion of the state tests of the BDK was announced in early November 2020. The ship returned to the shipyard, where it passed a control check and training before being transferred to the fleet.

At present, shipyard Yantar is building two Project 11711 ships - Vladimir Andreev and Vasily Trushin. Both BDKs are being built according to a modified project and will become part of the Pacific Fleet.
Ctrl Enter
Noticed oshЫbku Highlight text and press. Ctrl + Enter
We are
BDK "Peter Morgunov" project 11711 continued testing in the Baltic SeaThe first serial BDK of the 11711 project "Peter Morgunov" went to the test
Military Reviewin Yandex News
Military Reviewin Google News
64 comments
Information
Dear reader, to leave comments on the publication, you must sign in.