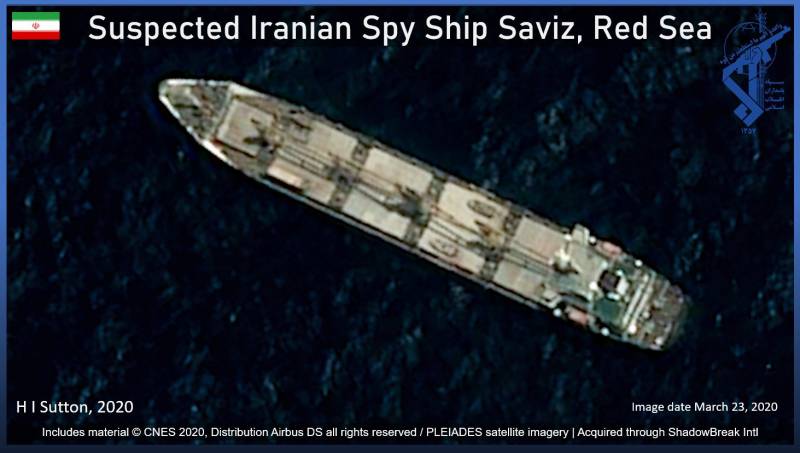 The naval forces of the Islamic Revolutionary Guard Corps are receiving ships of a new class for Iran. Advanced floating bases based on merchant ships are being built and put into operation. The IRGC Navy already has two such units (officially - only one), and one more will begin service in the near future.

The first floating base of the IRGC began service in 2017. The vessel "Saviz" was originally built as a dry cargo ship of large displacement, but a few years ago it was re-equipped according to a new military project. It received new electronic weapons for observation and command and control. The vessel is also capable of carrying watercraft of different classes, including, reportedly, remotely controlled fireboats. According to unconfirmed reports, "Saviz" has other possibilities.

Since 2017, Saviz has been regularly spotted off the coast of Yemen. It is believed that its crew helps the Houthis by various means and methods. There are various versions and assessments of the activities of such a floating base, but full information has not been officially disclosed.

Moreover, official Iran does not recognize "Saviz" as a warship supporting the activities of its own and friendly formations. Officially, the first "multipurpose vessel" or floating base of the IRGC Navy is considered to be "Shahid Rudaki", which became part of fleet 20 November. On board this vessel can be placed not only boats, but also helicopters or short-range anti-aircraft systems. 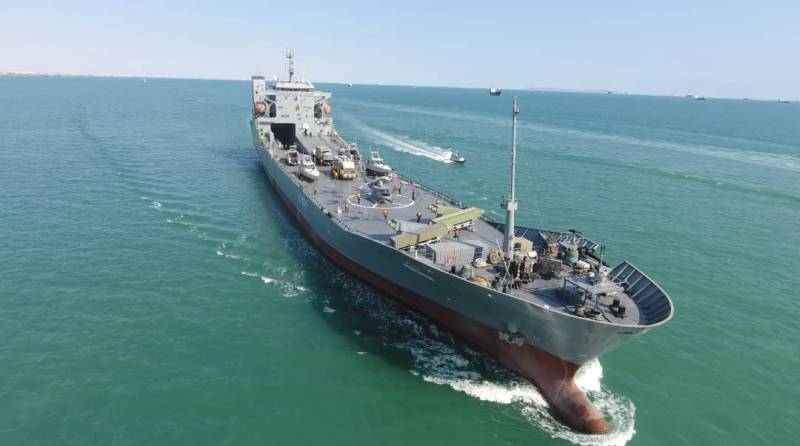 New floating base "Shahid Rudaki". Photo Sepahnews.com
As far as we know, "Shahid Rudaki" has just passed the necessary tests and has not yet started service. It can be assumed that in the near future this ship will be sent on the first voyage. The situation in the region remains tense, and the new floating base cannot count on quiet service at the quay wall.

According to official Iranian reports, the new floating base, called Makran, was built independently. The main part of the construction work was completed about a year ago, and after that we were engaged in the installation of equipment. However, foreign sources reveal a real detective history with seizures and abductions.

Recently, Iran has repeatedly arrested foreign oil tankers on charges of smuggling. One of these ships stood at the roadstead of the port of Bandar Abbas until mid-2020, and later it was confiscated and transferred to a dry dock for rebuilding. In recent months, foreign sources have published photographs of the tanker being rebuilt with various changes. Until a certain time, the IRGC did not disclose any details. 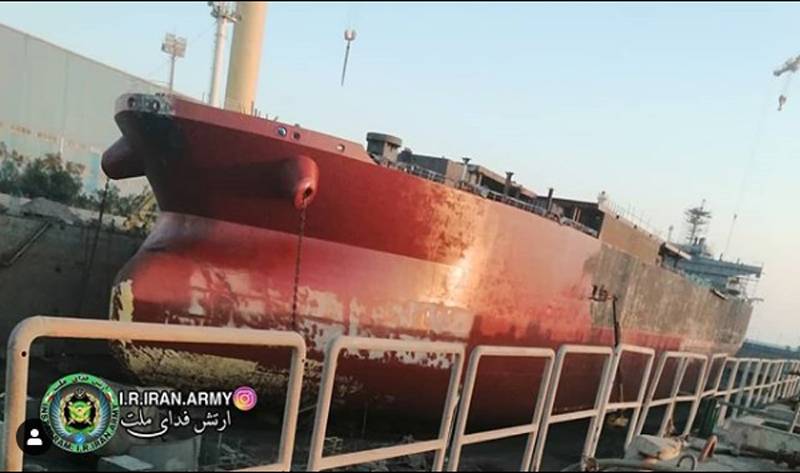 The future floating base "Makran" during perestroika. Photo Twitter.com/heartless_8080
On November 29, a foreign satellite took new images of a shipyard where a promising floating base is being prepared. The dry dock, where the tanker was stationed, was filled with water - this indicated the imminent withdrawal of the vessel to sea. According to foreign estimates, the floating base, named "Makran", may become part of the IRGC Navy by the end of the year.

According to Iranian and foreign sources, the basis for the advanced floating base "Makran" was an oil tanker of one of the foreign serial projects - the exact type of this vessel is still unknown. The length of the vessel reaches 230 m, the displacement is unknown.

In the course of recent work on the deck of the tanker new light hangars were installed, probably to accommodate aviation equipment or some weapons. The internal compartments were to undergo significant alteration. Some of the containers for transporting liquids could have been retained, but other volumes had to be converted to transport other goods.

The size and design of the Makran indicate that multipurpose helicopters and unmanned aerial vehicles for various purposes will be able to operate from the deck. It is also possible to place on the ship the SAM of the "3 Khordad" type or other systems with similar dimensions. The basing of boats and special forces was mentioned. In general, due to its size, the Makran is capable of carrying various equipment, weapons and equipment. The exact composition of such a load can be changed and adapted to the tasks of a particular operation. 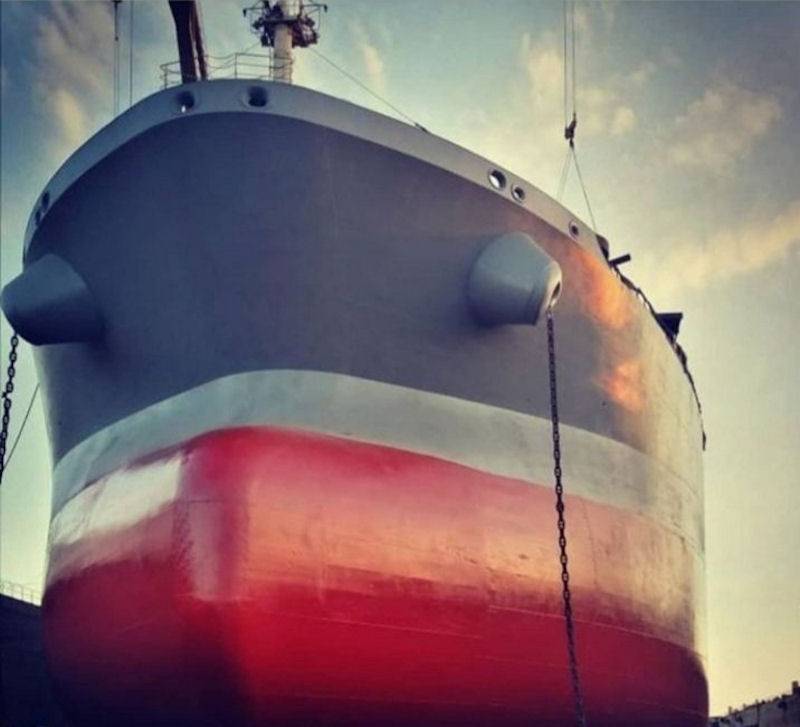 The bow of the former tanker. Photo Globalsecurity.org
Recently, the command of the Navy revealed possible areas of application for the new vessel. First of all, it will have to ensure the activities of the fleet at a distance from the bases. Refueling, supply with the necessary resources and even minor repairs can be carried out using the floating base. At the same time, helicopters, boats, UAVs and special forces on board the latter will significantly expand the combat capabilities of the ship's connection.

Thus, in just a few years, several multipurpose vessels with broad capabilities appeared in the IRGC Navy, capable of supporting the operation of warships or independently performing combat missions. The emergence of such vessels is associated with several main factors and has a number of positive consequences.

A common feature of the new floating bases is the use of ready-made non-military platforms. The use of an existing tanker or dry-cargo ship allowed significant savings on the construction of new pennants for the fleet - especially in the case of the Makran, whose base was confiscated from a foreign ship owner. 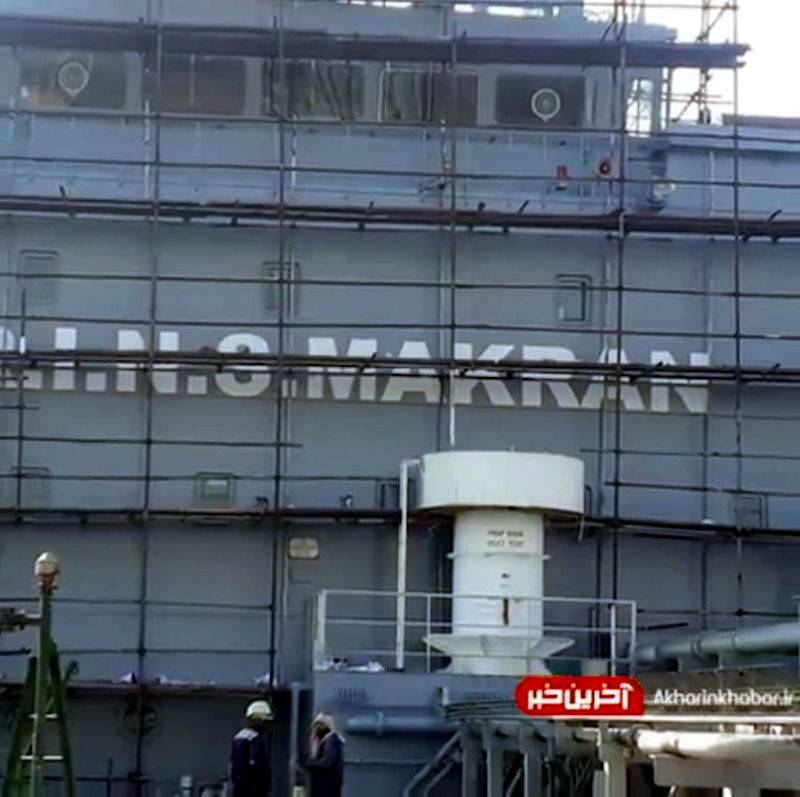 Fragment of the ship's superstructure. Photo Globalsecurity.org
In light of Iran's limited economic and production capabilities, this approach to construction looks justified. However, it also has noticeable disadvantages. So, in terms of equipment, weapons, design, etc. the multipurpose vessel does not meet military standards.

Advanced floating bases of new types are capable of carrying a large number of helicopters and boats. In addition, they are more flexible in the choice of such a payload. In some situations, such a unit of the fleet can be just as useful as the warships of the traditional look. This is already confirmed by the experience of operating the vessel "Saviz". Despite noticeable differences from subsequent floating bases, it effectively helps the Yemeni Houthis.

New floating bases are capable of being part of ship orders and ensuring their activity at a great distance from ports. Due to this, it is planned to expand the areas of responsibility of the IRGC Navy and the armed forces. At the same time, the rebuilt ships will not only supply the ships with the necessary resources, but also help them in reconnaissance, air defense, etc. 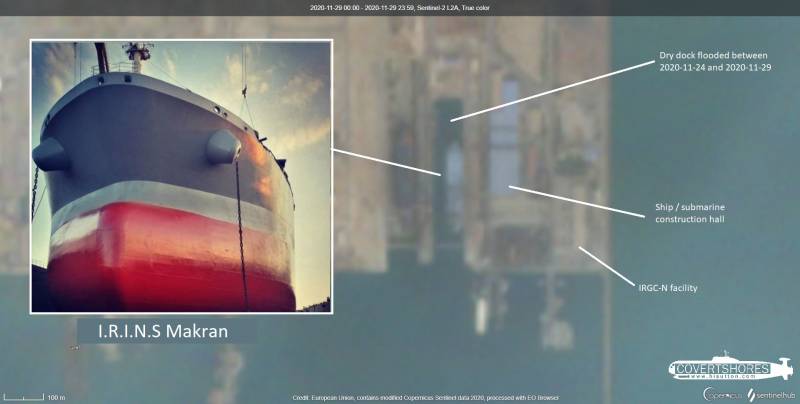 Satellite image of a shipyard; dock with "Makran" flooded. Photo Hisutton.com
As the experience of "Saviz" shows, such a multipurpose vessel is capable of operating independently. Its standard and replaceable equipment allows for reconnaissance, supplying troops and solving other tasks, as well as providing self-defense. However, like any other single ship or vessel, an unaccompanied forward floating base is extremely vulnerable to well-organized attacks.

The IRGC navy is inferior in size and equipment to the fleet of the armed forces, but all measures are being taken to reduce the backlog and obtain the maximum possible potential. One of the latest steps in this direction is the construction of multipurpose vessels, advanced floating bases on the basis of existing platforms. Two of these vessels have already entered service, and the third is expected to be commissioned in the near future.

It should be noted that in any fleet there are various support vessels designed to help the main combat units. However, the Iranian decision to combine transport, support and combat functions in one ship is unique in its kind. The ships built according to such an original concept have yet to prove their usefulness. However, some of the desired results have already been obtained, while other expectations are confirmed by practice.