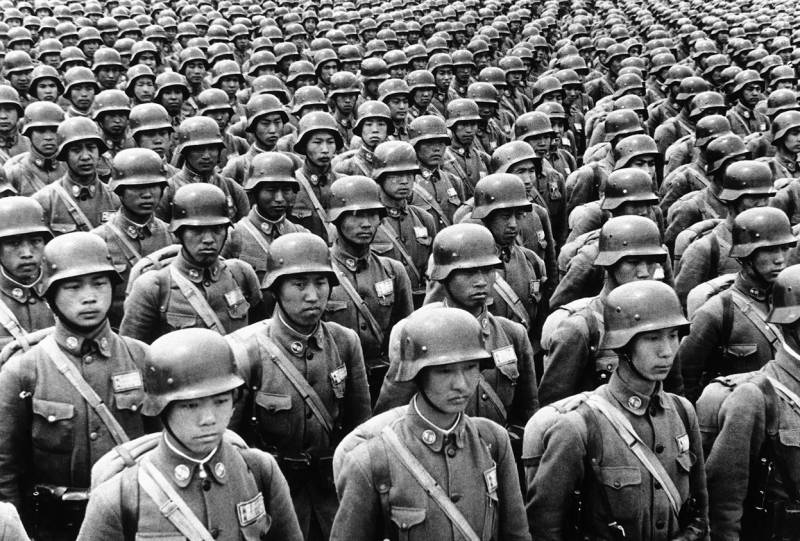 In fact, for China, the colossal military conflict that shook countries and continents from 1939 to 1945 is a pure abstraction. This country had its own battle - with Japan, which is part of the Second World War very conditionally. It began earlier, in 1937, and, of course, ended with the surrender of Tokyo in 1945.

At the same time, someone may have a reasonable question: how did it happen that tiny Japan managed to defeat, occupy and terrorize huge China for many years? The answer, as you might guess, is in comparison of the fighting qualities of the fighting armies.

It is easiest to say that the Chinese army had a lot at the time of the outbreak of hostilities with Japan. People ... The total number of nominally "under arms" at that time exceeded 2 million people in the Celestial Empire. By 1941, that number had risen to nearly 4 million. True, the key word here is, alas, “nominally”.

The country did not have a unified armed forces, as such. The commander-in-chief of the National Revolutionary Army of the Republic of China (NRA), Chiang Kai-shek, was actually subordinate to no more than three hundred thousand people. The rest of the forces were scattered into divisions, each of which was commanded by a general who imagined himself to be the most important and did not want to follow anyone's orders.

There were also communists who were mercilessly at odds with the Kuomintang (who ruled the Chinese Republic), but in the face of the Japanese threat (and on the advice of senior comrades from the USSR) rallied with him in the United Front to fight the invaders. The whole 8th Army was formed from the forces of the CPC, numbering at various times from 300 thousand to a million people.

In the battles, the Communists showed themselves pretty well. Their actions were so successful that it raised concerns among Chiang Kai-shek. And the next army formed by the CCP (4th) was defeated by its own compatriots from the NRA. After that, of course, there could be no talk of any military alliance between the CPC and the Kuomintang.

There was not enough unity

So, what did the Chinese army lack? As it is already clear from the above, unity. The discipline was also just awful. Mass desertion, non-observance of orders, and the like were common. We can say ordinary. There was no question of combat training at all. A certain number of "personnel" divisions of the NRA were trained by German specialists, and a certain number of the same pilots or tankmen were trained by advisers from the USSR and later the USA.

However, talking about some kind of professionalism of the Chinese military at that time is simply inappropriate. Of the 300-plus divisions that China had in 1941 on paper, a maximum of 40 were somehow trained. Basically, it was untrained, badly armed and equipped mass of people, led by "commanders" with very dubious qualities ...

China practically did not have its own military industry. Local arsenals still managed to cope with the production of copies of German, Czech, American rifles and machine guns, but you yourself can imagine what quality these "clones" were. Therefore, the "elite" units of the NRA, trained by German instructors, flaunted the real Gewehr 98 and Kar.98k. Yes, in addition, they wore M35 helmets (habitually associated with you with the Nazi invaders). Which China itself produced and bought in Germany in literally hundreds of thousands. By the way, with regard to equipment, leather boots in the Chinese army were the privilege of exclusively senior officers. The soldiers walked in shoes made of straw and rags ...

In general, the arsenal of the NRA and other armed formations of the Celestial Empire at that time was something incredibly colorful and diverse. Rifles, machine guns and other small arms weapon there could be found literally from all countries that produced such - German, French, English, Belgian, Italian, Soviet, American and God knows what else. There was very little artillery, and it was represented mainly by Soviet and German models. With armored vehicles, things were about the same - our T-26s and an unimaginable jumble of outdated German, English and even Italian models.

Aviation in the Chinese army, as such, it appeared in periods when the allies began to provide it with intensive military assistance. Initially (in the period 1937-1941) it was done by the USSR, later by the USA. Airplanes, as a rule, had to be delivered "complete" with pilots. It was much easier and more effective than trying to train local personnel, although work was carried out in this direction as well.

Generally speaking, at the first stage of its war with Japan, the Soviet Union provided China with very effective and large-scale military assistance in all possible areas - from direct supplies of weapons, ammunition and equipment, as well as the provision of military advisers to the construction of defense enterprises.

The aid was curtailed, firstly, because of the anti-Soviet position of the Kuomintang, and secondly, because of the signing of a neutrality pact with Japan in April 1941. The war with Germany was about to begin, and the border in the East had to be secured at any cost.

The United States helped the Chinese Army under Lend-Lease. However, the problem was that at the beginning of their deliveries, the country was almost completely blocked by the Japanese. As a result, the army of the Celestial Empire throughout the war experienced a severe shortage of weapons, ammunition and everything else.

It is not surprising that the human losses of the Chinese armed forces at various stages of hostilities exceeded the Japanese ones by 5 or even 8 times.

In addition, the situation was aggravated by the continuous confrontation between the Kuomintang and the Communists, at times moving from neutrality armed to the teeth to open bloody clashes.

In fact, the surrender of the Japanese forces on the territory of China and the victory of the Celestial Empire on September 9, 1945 were due solely to the defeat that the "invincible" Kwantung Army suffered from the USSR Red Army.