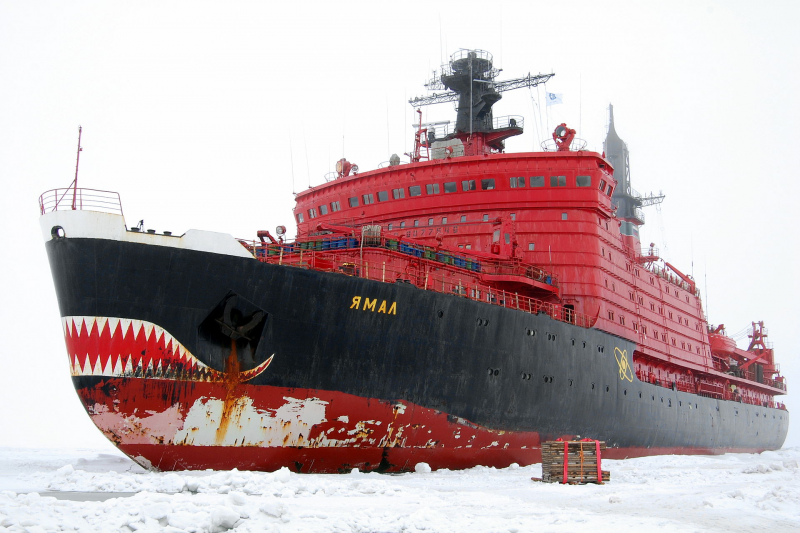 Global warming has allowed humanity to open up new shipping routes. And the Northern Sea Route is not the only one among them.

In Canada, they believe in the competitiveness of the Northwest Passage, which has not yet been completely opened from the ice in the summer. Among Canadians, the coast near the pass is much less developed and almost uninhabited. No major ports or icebreaker fleet... In general, for the full development of this alternative option, Canadians will have to wait for even greater warming and several hundred billion dollars in investments.

There is information about the existence of the Cross-Polar Sea Route, but everything here is so foggy that there is not even a clearly defined route. 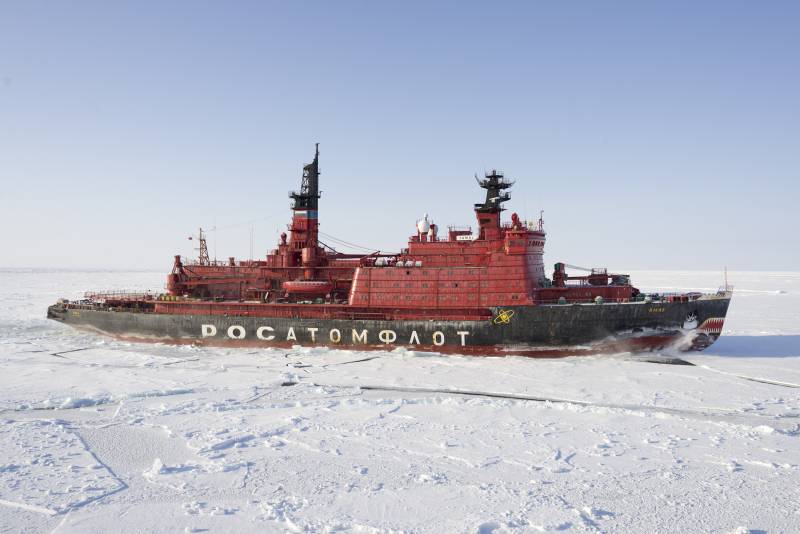 Source: wikipedia.org
In the case of the Northern Sea Route, Russia sees the situation as much more optimistic. The territory is relatively inhabited, and there are large ports, and the icebreaker fleet is being intensively put into operation. Some of the ports of the Northern Sea Route have railway lines, which greatly simplifies logistics. If you compare this route with the sea route through the Suez Canal, the sailing time is reduced by about 40%.

There is a separate definition for the Northern Sea Route in the Russian Merchant Shipping Code:

“The water area adjacent to the northern coast of the Russian Federation, encompassing inland sea waters, the territorial sea, the contiguous zone and the exclusive economic zone of the Russian Federation and bounded from the east by the demarcation line of sea spaces with the United States of America and the parallel of Cape Dezhnev in the Bering Strait, from the west by the meridian Cape Zhelaniya to the Novaya Zemlya archipelago, the eastern coastline of the Novaya Zemlya archipelago and the western borders of the Matochkin Shar, Kara Vorota, Yugorsky Shar straits ”.
Russia has a very clear position on the Northern Sea Route - this is a real national treasure, elevated to the rank of primary state interests.

In the United States, the transport corridor along the territory of Russia is ready to be viewed exclusively as an international structure. The confrontation between Moscow and Washington is being built around this contradiction.

The arguments of Russia and the United States

The situation with the Northern Sea Route is full of not obvious legal subtleties. The norms of the 1982 UN Convention on the Law of the Sea of ​​XNUMX play in favor of the unrestricted operation of this line by ships of foreign states.

In accordance with the Convention, ships of any states have the right to free navigation within the exclusive economic zone of the coastal state, which is equal to the distance of 200 nautical miles from the coastline minus 12 nautical miles of the territorial sea and 12 miles of the adjacent zone. According to this rule, part of the Northern Sea Route can indeed be freely used by third-party vessels, including the military.

It is worth remembering that the sea line along the northern borders of Russia is very changeable and its configuration depends on the freezing of the seas, weather and hydrological conditions. All this only adds to the confusion in foreign minds regarding the status of the Northern Sea Route.

In an extreme climate and severe ice conditions, coastal countries (in this case, Russia) can independently regulate shipping to prevent possible environmental damage. In this case, safety and prevention of emergencies fall on the shoulders of the coastal country.

Legally, borders are described by the vague term "ice-covered areas". That is, Russia is actually allowed to take control of the entire Arctic.

In addition, according to the tradition that has developed over the centuries, the powers of power in the territory are transferred to the pioneer state. In this stories Russia has much more legal trump cards.

But the United States, along with the northern NATO countries, is not entirely happy with this.

In recent years, the Northern Sea Route has become a real center of attraction for potential adversaries of Russia. Guided by the one-sidedly understood provisions of the UN Convention on the Law of the Sea, warships of NATO countries are increasingly testing the strength of Russian defense in the region.

Among the potential objects of control is not only the Northern Sea Route itself, but rich deposits of minerals hidden in the continental shelf. Exercises are organized in the neutral waters of the Arctic zone, in which not only NATO countries participate, but also "neutral" Sweden and Finland.

As noted in the Russian defense department, last year in the Arctic, the intensity and scale of activities for operational and combat training of NATO armed forces continued to increase, the total number of which increased by 17%. Intelligence activity increased by 15%. Anti-missile defense systems are being strengthened in coastal states. And some countries are resuming underwater patrols in the region.

Since 2018, the second operational fleet of the US Navy has been recreated, in whose area of ​​responsibility is part of the Northern Sea Route off the coast of Russia. By 2022, the United States is to form, together with the Europeans, the NATO Atlantic Joint Command, which, together with the Home Front Command, will ensure the operational transfer of American troops to Europe.

Literally 60 kilometers from the Russian border, the Norwegians are building a new radar station. In addition, Norway doubled the number of US Marines deployed in 2018.
British submarines with "Tomahawks" have been patrolling the Arctic since 2016, and ground units are honing their "war in the cold" skills in Norway.

It can be said with some certainty that the sanctions policy of the United States and the European Union, apart from its other goals, has a focus on weakening Russia's influence in the Arctic region.

In this regard, low oil prices are also seen by initiators from abroad as one of the factors limiting Moscow's resources in the development of the Northern Sea Route. 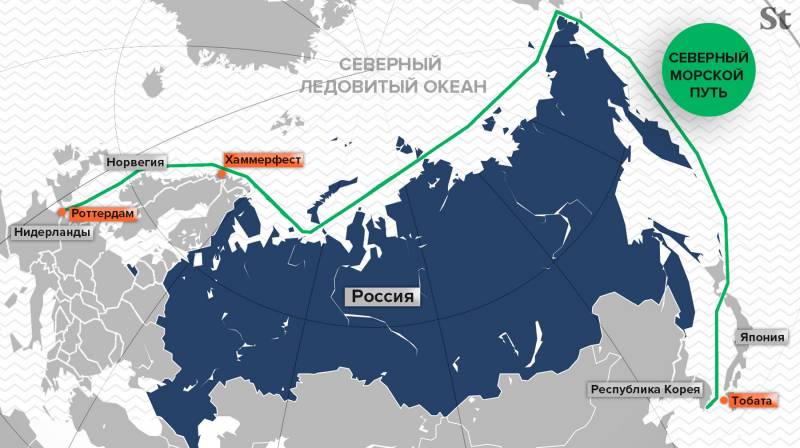 Source: dailystorm.ru
Among the countermeasures in Russia, special rules have been developed for the passage of military ships of foreign states along the Northern Sea Route. This was largely done because of Washington's threats to block the sea route, as well as in connection with the noticeably increased activity of NATO countries in the Arctic.

Firstly, the notice of the visit of the warship must come no later than 45 days. The document should reflect the name of the ship, sailing time and a clear route. In addition, the notification separately describes the vessel's displacement, draft and propulsion parameters.

Formally, all this is required by the concern for safety, approved by Article 234 "Ice-covered areas" of the aforementioned UN Convention.

Secondly, a Russian pilot is sent to a military vessel without fail. The movement of the vessel is under the full control of the Russian Navy. And in case of an emergency, icebreakers will come to the aid of a military vessel.

The straits of the Northern Sea Route are another thorn in the minds of the American establishment. We are talking about the Vilkitsky, Shokalsky, Sannikov and Laptev straits, to which, in Washington's opinion, the regime of transit international shipping should be applied. And in this, the NATO countries that are members of the Arctic Council are in solidarity with the United States.

The problem of these straits was raised back in the 60s of the last century, when US ships tried to break through the Soviet Arctic straits of Vilnitsky and Shokalsky. Failed. And the countries exchanged diplomatic notes of protest.

Then the USSR was unambiguously the winner - after 1967, the Americans abandoned their attempts to break through. Nevertheless, now this issue is again on the agenda. In many ways, its solution depends on the growing power of the Russian armed forces in the Arctic region.

Despite the fact that now the development of the situation around the Northern Sea Route can be called sluggish, aggravations are possible in the future. They will be connected with the further retreat of ice to the north and the release of the water area for the unimpeded passage of ships without icebreaker escort.

This, by the way, will greatly simplify the development of minerals on the continental shelf, which, we recall, is considered Russian territory.

If the country's leadership does not continue its line of upholding sovereignty in the region, interested countries will be ready for provocations.

In the most "harmless" scenario, Washington will announce sanctions against the owners of ships using the Northern Transport Route. The example of Nord Stream 2 is proof of this.

In the event of further escalation, Norway and the United States are quite capable of unilaterally declaring the Northern Sea Route an international transport artery. And the Pentagon's second fleet will guarantee the safety of ships.

In this case, the cold confrontation in the North may well become a hot global conflict.

Ctrl Enter
Noticed oshЫbku Highlight text and press. Ctrl + Enter
We are
The amount of ice in the Arctic decreases on the eyesSituational analysis of the death of the MH17 flight (Malaysian Boeing 777), made on the basis of engineering analysis from 15.08.2014
Military Reviewin Yandex News
Military Reviewin Google News
67 comments
Information
Dear reader, to leave comments on the publication, you must sign in.