In Ukraine, they are discussing how the Russian UAV "Okhotnik" is going to confront the Turkish "Bayraktar" 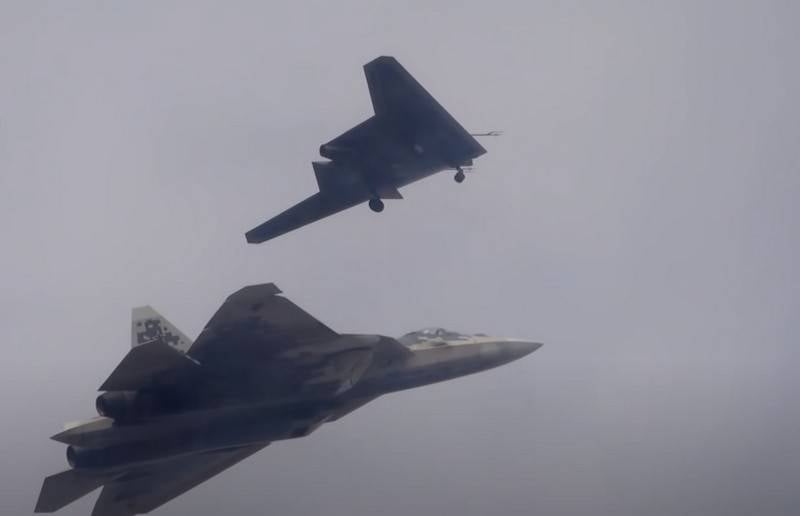 The Russian Ministry of Defense is accelerating work on the development of the S-70 Okhotnik strike drone. According to the Ukrainian edition of Defense Express, the Russian drone should take on the function of a "hunter" for the Turkish Bayraktar TB2 attack drones. The publication ponders how the Russian attack UAV is going to confront the Turkish "Bayraktar".


The Ukrainian newspaper writes that Russian President Vladimir Putin has demanded that work on the Okhotnik strike drone be accelerated. The reason for this was the alleged "complete failure" of Russian air defense systems in Nagorno-Karabakh, where Turkish drones were unhindered to destroy the anti-aircraft systems of the Armenian army.

The publication emphasizes that the Russian-made anti-aircraft systems do not see the Bayraktar TB2, but the Turkish drone "practically with impunity" could hit Russian air defense systems.

This is probably why, according to Ukrainian "experts", Putin instructed to speed up work on the "Okhotnik", although according to the initial plans, the serial production of the Russian attack drone was planned to begin in 2024. And after the start of serial production of the S-70 "Okhotnik" will take over the function of hunting for Turkish drones.

And one more Ukrainian argument in favor of Bayraktar TB2 drones, which are already in service with the Armed Forces of Ukraine - Turkey has more than 100 Bayraktar TB2 UAVs at its disposal, while the Russian Okhotnik will not reach mass production soon.
Ctrl Enter
Noticed oshЫbku Highlight text and press. Ctrl + Enter
We are
Models of Tor-M2E, Tor-M2K, Tor-M2KM and Osa-AKM air defense systems at the international aerospace exhibition Aero India - 2015Interview of Vladimir Putin with Radio Europe-1 and TF1
Military Reviewin Yandex News
Military Reviewin Google News
54 comments
Information
Dear reader, to leave comments on the publication, you must sign in.