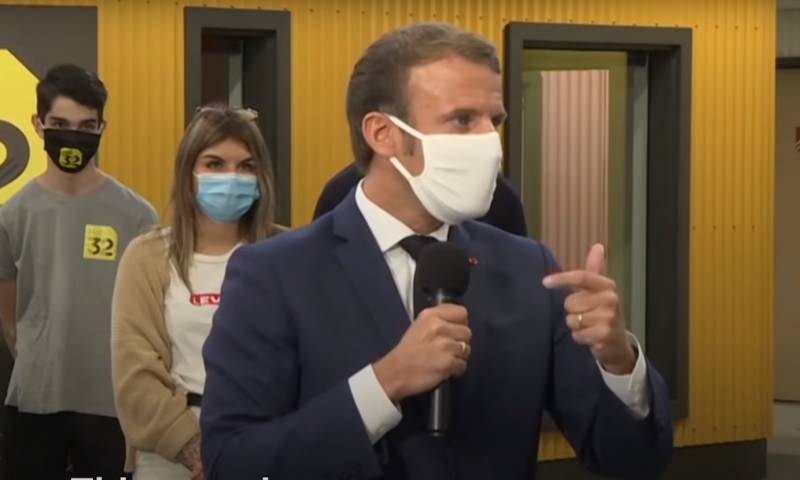 After the October terrorist attacks in France and abroad, most of the public demanded radical steps from the authorities. The ferocity of the fanatical thugs angered even the most liberal commentators. In particular, French citizen Vladimir Pozner called on Paris to take extremely unpopular measures:

“As a French citizen, I would consider it necessary to immediately respond to what happened in this way: to collect five thousand emigrants, who are already, by the way, French citizens, those on whom there is a police dossier, and such dossiers, of course, are abundant and these people are simply taken and sent back to Algeria. "

However, from the very beginning it was clear that the government would not dare to take such tough measures - the surrounding EU countries would be categorically opposed. And in the forefront of such critics will be Germany, which, incidentally, also suffers a lot from religious fundamentalism. 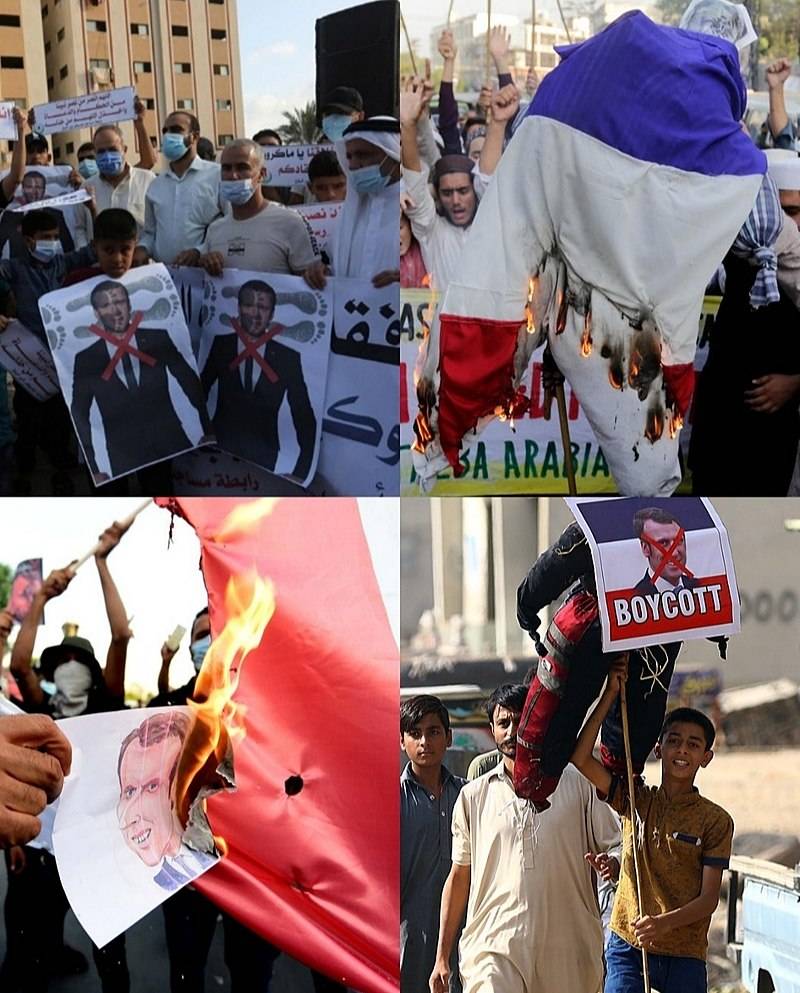 Source: Vladimir Lyashkovsky, Wikimedia Commons
Despite such a controversial concern for human rights, the president of the republic, Emmanuel Macron, had to react somehow, otherwise the civil society would not appreciate inaction. After a long agreement on December 8, a draft law “On strengthening republican principles” appeared, which should be finally approved in parliament only at the beginning of next year.

That is, at least two months will pass from the moment of the bloody terrorist acts to the reaction of the authorities. By the way, the Council of Ministers of France adopted this bill very quickly - within one day. For a republic, accustomed to being a true example of observance of liberal values ​​for the rest of the world, many provisions of the future law seem draconian.

Before we figure out what methods Parisian lawmakers will use to combat the radicalization of Islam, let us clarify the importance of Muslims in French society.

Oddly enough, but Islam in France is a relatively new phenomenon. The first mosque in the country appeared only in 1926. But in the 1950s – 1970s, the French economy required an influx of new, cheap labor, which - in an ever increasing flow - began to arrive from the former French colonies, in particular from Algeria, Tunisia, Morocco. Most of these migrant workers settled in France and received citizenship.

The growth in the number of Muslims is also facilitated by the mechanism of family reunification, which is still working on a permanent basis, despite the more stringent measures being taken. As a result, now the country is home to from 5 to 8 million people professing Islam. Such a spread in numbers is explained by liberal French legislation, which prohibits specifying nationality and religious affiliation during the census. However, no other EU country has such a large proportion of Muslims.

There are at least 2,2 mosques officially operating in France. And also several hundred underground, who are precisely at the forefront of the radicalization of Muslims. It is noteworthy that the French learned about the presence of the latter only after November 13, 2015, when 130 people died in a large-scale terrorist attack.

Another five years had to pass before the government tightened legislative control over religious fanatics.

The terror of Islamic fundamentalists touched the French for the first time in 1974. Then Palestinian militants hijacked an Air France plane flying from Tel Aviv to Paris. After that, the activity of terrorists subsided somewhat, so that from the beginning of the 90s a number of terrorist attacks were noted. The Algerian "Armed Islamic Group" retaliated against France for supporting the anti-Islamic coup at home in 1991. In 1995, they organized a series of bombings in the Parisian metro. 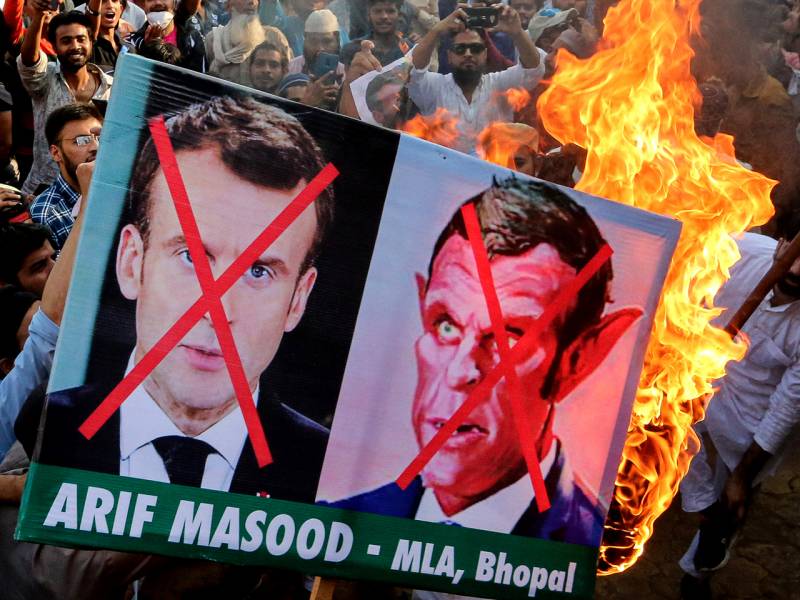 Photo: Sanjeev Gupta / EPA
Until that time, the French were quite calm about Muslims on their territory. The fact is that the state left religious issues for self-regulation, without interfering in the affairs of Muslim communities. The principle of "unity in diversity", unshakable for the republic, was preserved. And all hope was in the melting pot of "multiculturalism".

But it didn't work out. And the first time the state intervened in the affairs of Muslims (albeit timidly) was in the early 90s, when the Council was formed to discuss the issue of Islam in France. Later, the notorious pact appeared, regulating relations between the state and Muslim organizations. It was approved at various levels until 2000.

The delays were associated with the clause on the freedom of choice of religion by a Muslim. Which is one of the most terrible sins in Islam - itridad. By the way, in the case of special stubbornness of an apostate or apostate, he is punished with death. Under the pressure of Muslim organizations, the clause on the possibility of changing the faith was excluded and signed by all parties.

This fact later became the reason for accusing the French government of promoting "the possibility of an Islamic interpretation of French criminal law." In fact, Paris turned a blind eye to the potential for the death penalty in France for apostasy in Islam. Was this perceived by fundamental Islamists as a sign of weakness? Unknown.

One of the first tough moves against Muslims was the ban on wearing the hijab in public. It happened in 2010 and caused outrage among the "new French" who profess Islam. Even the European Court of Human Rights tried to challenge the ban unsuccessfully.

And then a series of terrorist attacks began. In 2012 in Toulouse and Montauban. In 2014, a series of attacks on the French military. And finally, in 2015, the attack on the editorial office of Charlie Hebdo and the mentioned massacre of November 13. Polls conducted five years ago showed that up to 15% of Muslims in France considered the cartoons of the Prophet Muhammad a very serious reason to justify the terrorist attack on the newspaper's editorial office. And in 2016, 30% of adherents of Islam considered Sharia law more significant than the secular laws of France.

As a result, the government faced a difficult choice - either to tighten the screws, seriously limiting the freedoms of Muslims, or to remain adherents of "universal human values", to which the republic has been moving for several centuries.

According to the developers, the draft law "On strengthening the republican principles" is in no way directed against Islam. French Prime Minister Jean Castex, after approving the initiative by the Cabinet of Ministers at a press conference, explained:

“At today's meeting, we approved a bill strengthening the principles of our republic. This bill is not directed against religions, against Muslims in particular. On the contrary, it is a law about freedom, about emancipation in the face of religious fundamentalism. With this important text, we want to give you a means of protection against ideological and political associations that attack our values, sovereignty and sometimes lead to criminal offenses. "


However, the main provisions of the law clearly show the desire to take control of the process of radicalization of Muslims. The liberal part of French society has already called the legislative initiative a stigmatization of Islam. Abroad also did not leave the project without comment. In Ankara, Emmanuel Macron's law was called "an outright provocation against Islam," and researchers at the Al-Azhar University of Cairo described the French president's views as "racist."

The French government plans to fight illegal schools, whose "curricula" are built around the principles of radical Islam. Homeschooling is now only possible for medical reasons. Previously, it was possible to pick up a child from school and teach at home. What values ​​were instilled in children in religious communities, no one has ever regulated. Macron's initiative will help protect the fragile psyche of children from religious fanaticism.

If the law is passed, every official will have to swear an oath of religious neutrality. This, by the way, will completely close the path to power for representatives of the traditional Muslim communities in France - an unprecedented violation of freedom of religion and elementary democratic values.

Medical clinics will now be banned from issuing certificates of virginity. Punishment for polygamy and coercion into marriage up to deportation is envisaged. When suspicious marriages are concluded, officials will be especially biased to find out whether he is willingly married or the bride is against. Much of what the French have observed in localized Muslim communities for decades is now outlawed.

The French will try to limit the influence of foreign imams on the minds and hearts of mosque parishioners, that is, they will simply not extend their residence permit. Now a considerable part of the Muslim clergy are visitors from Morocco, Turkey and Algeria. Macron dreams of raising in his country a generation of imams who would be alien to the principles of fundamentalism.

Before the drafting of the law “On strengthening the republican principles,” Muslim associations were virtually inviolable - only serious criminal offenses could cause closure. Now the authorities will have the opportunity to close the association for "provoking violent actions."

The developers of the bill did not forget about the financial side of the issue. Religious organizations were obliged to report on foreign transfers for more than 10 thousand euros. All public grantees must sign a deed of commitment to the secular values ​​of France. Couldn't prove commitment - return the money back.

Liberte, Egalite, Fraternite (Liberty, Equality, Fraternity).
Democracy found itself on the brink of survival in the face of the threat of religious fundamentalism.

And she clearly lost the first battles.