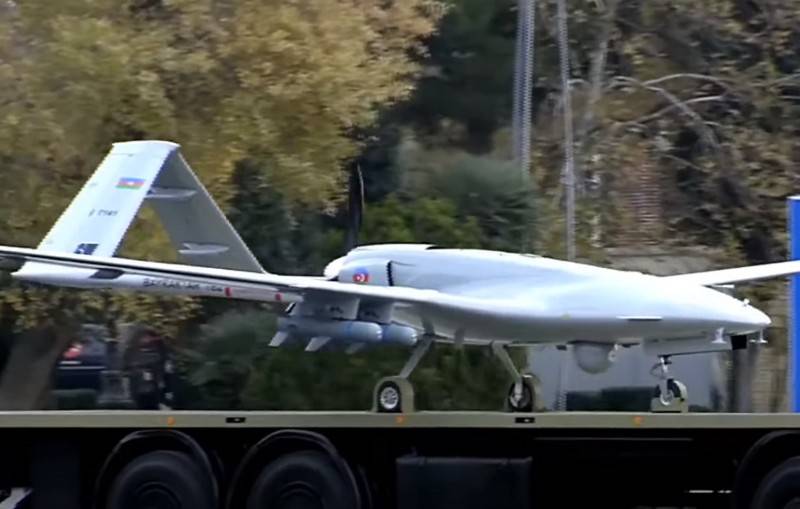 The Bayraktar TB2 unmanned complex, supplied to the Azerbaijani army by Turkish allies, played an exceptional role in the victory of Azerbaijan over Armenia in the war for Nagorno-Karabakh. This was stated by the President of Azerbaijan Ilham Aliyev during a military parade in Baku.

The famous Bayraktar, a product of the Turkish defense industry, has brought about great changes and has played an exceptional role in our success. The whole world has once again witnessed the intelligence and talent of the Turkish people, convinced that Turkish industry is a developed industry
- said the Azerbaijani leader in his speech to the participants of the parade.

As noted by the Azerbaijani and Turkish press, Turkish Bayraktar TB2 drones became "one of the symbols of victory" of the Azerbaijani army in Nagorno-Karabakh, destroying a large number of enemy military equipment and playing an "exceptional role."


During the parade dedicated to the victory of Azerbaijan in the war over Armenia, Turkish drones were shown to the general public. Bayraktar TB2, installed on the platform of military trucks, marched in the parade column in front of the podium, where there were two presidents at once - the head of Azerbaijan Ilham Aliyev and the Turkish leader Recep Tayyip Erdogan.
Ctrl Enter
Noticed oshЫbku Highlight text and press. Ctrl + Enter
We are
Bayraktar TB2 shock UAVs for Ukraine: where are they going to use the APUNew war in the Caucasus be?
Military Reviewin Yandex News
Military Reviewin Google News
81 comment
Information
Dear reader, to leave comments on the publication, you must sign in.