Give money to confront the Russians in the Arctic 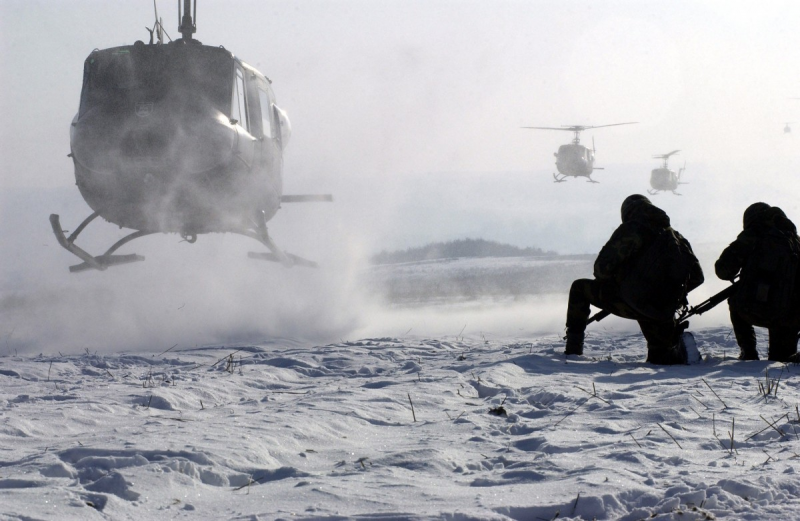 No sooner had we discussed the article by the head of American intelligence, John Lee Ratcliffe, about the need to urgently revise the budget towards increasing the funding of intelligence officers, when the next petitioner took his place - General Terrence O'Shaughnessy, Chief of the Northern Command of the US Armed Forces. Yes Trump, he created such a mess among the military, special services and other paramilitary structures.


This is what a record military budget of more than $ 740 billion means. And what passions are now boiling among manufacturers of military equipment, weapons and other products for the military. The piece is really big and tasty.

That is why the statements of American generals can be safely attributed not only to the need to increase the defense or offensive capabilities of the army, but also to lobbying the interests of those manufacturers who are the main suppliers for the US Army formations.

General O'Shaughnessy's main thesis sounds quite reasonable. The United States needs to build up its military capabilities. True, the explanation of this thesis sounds rather strange for the general. Russia could strike at the US from the Arctic! For an uninitiated person, this sounds quite logical. But for those who studied at military universities, this is at least ridiculous.

With the advent of intercontinental ballistic missiles, military analysts began to calculate the possibilities of striking enemy territory, including the distance to objects. Comparing all the initial data, from the distance to the presence of missile defense systems, it was analysts who came to the conclusion that the most favorable place to strike is a strike across the North Pole. And, accordingly, missile formations were stationed in the Urals and Siberia for this very purpose.

General Terrence O'Shaughnessy speaks of this as a new phenomenon, a problem that has emerged recently. In doing so, he refers to the opinions of US military experts. Indeed, if we compare the military power possessed in the Arctic latitudes, for example, the Russian army, then one can really say about the significant limitations of the capabilities of the US army.

The military and politicians have been talking for a long time that the United States needs to increase its own efforts in the development of the Arctic theater of operations. These conversations especially intensified after Russia adopted a program to create its own Arctic grouping and deploy its units on the islands along the Northern Sea Route.

However, in spite of the talk, there is no particular progress on this issue. Of course, it is within the capabilities of the Americans to create a military base somewhere beyond the Arctic circle, but it is not yet clear how to supply it and rotate military personnel. The most powerful fleet that the Americans have is simply not adapted to operate in the Arctic frost.

For example, metal for the production of ships and military equipment in the United States has never been tested for strength at temperatures below minus 20. This parameter was simply not included in the technical requirements. Hence follows the rather costly problem of creating an Arctic fleet, arctic weapons and arctic military equipment.

The head of the Northern Command and NORAD (Joint Aerospace Defense Command of North America), General O'Shaughnessy, spoke about the need to accelerate the development of new weapon systems and military equipment for the Arctic exactly a year ago. When in September-October the record budget for 2020 was also approved. True, the emphasis last year was still on strengthening air defense and missile defense systems.

The United States has not shown much success in developing the Arctic in 2020.

It seems to me that the activity of the Northern Command is more an imitation than a real work on the creation of combat units and formations, whose task will be to confront the Russian units in the northern latitudes. Americans are interested in the possibilities of northern countries to develop the wealth of the northern seas. And given the fact that these countries have long been at least partially under US control, the task of the American army is slightly changing.

It is necessary to "seal" the exits to the Northern Sea Route and establish at least some kind of control in the areas of the route itself. So far, and even then purely in theory, before detection by Russian submarines - such control can be provided by several submarines. Thus, all the talk about the division of the Northern Sea Route, about the joint use by all countries and other threats at the moment are just "pouting cheeks".

The Americans are intensively escalating the situation in the northern latitudes, mainly at the diplomatic level. Very often, among US politicians, talk about the unfairness of the distribution of the wealth of the North is heard. On what basis does this region belong only to 8 countries? Let me remind you that today it is really so. According to international law, the Arctic has only 8 "hosts": Canada, Denmark, Finland, Iceland, Norway, Russia, Sweden and the United States.

The Arctic is often compared to Siberia. While there were few technological and logistical opportunities for the development of these regions, no one paid particular attention to their existence. But as the possibilities of mankind increased, the question arose about the injustice of the ownership of natural resources in one country.

In the coming years, the Americans will not be able to create something equal in power to the Russian group. This means that they will not be able to lay claim to the "new Siberia" either. But the pressure on those who already have an Arctic fleet today, units and subunits capable of conducting combat operations in the North will be merciless. And it is these countries that will be our main competitors in the Arctic.

Change can be global

We write and talk a lot about the Northern Sea Route. Indeed, the use of this trade corridor will give a huge boost to trade between East and West. But we completely forgot about one more way - the Northwest! This is the name of the trade route that runs in the Western Hemisphere. Path along the north coast of the USA and Canada.

Previously, this path was practically not discussed. Unlike Russia, neither the United States nor Canada made any special efforts to develop this sea route. However, what is happening to the climate today - the very same global warming, makes Americans and Canadians think about its development.

By the way, other global players, such as China and India, are also thinking about the same. Why not try to invest in development and thus get your share of future dividends? This idea looks absurd only at first glance, who wants to lose their own benefit? But let's take a look around. The same Nord Stream and other global projects belong to several countries at once ...

So it will be with the arrival of autumn every year, as long as the USA exists

The next fiscal year in the United States begins in October. And every year in the fall we see the same picture. With tears in their eyes, American generals and admirals tell the US Congress about the deplorable state of their army and navy units. Every year, in the fall, the power of the Russian and Chinese armies for some reason greatly increases, and the American one turns into "whipping boys."

As recently as yesterday, the head of National Intelligence John Lee Ratcliffe, already mentioned at the beginning of the article, told Congress about the "irresponsible space power" that launches satellites, which, according to American intelligence officers, are space weapons... They perform very dangerous maneuvers next to peaceful American space robot soldiers.

But neither we nor the Chinese should be deceived by the successes of our armies. The situation will change radically at the moment when generals begin to report on their work. But this will not be in the fall. The seasons of strengthening and weakening of the US Army change in the same way as the seasons of the year. Spring Summer Autumn Winter...

Ctrl Enter
Noticed oshЫbku Highlight text and press. Ctrl + Enter
We are
Situational analysis of the death of the MH17 flight (Malaysian Boeing 777), made on the basis of engineering analysis from 15.08.2014Strangulation: the context, conduct and consequences of the American naval blockade of China
Military Reviewin Yandex News
Military Reviewin Google News
21 comment
Information
Dear reader, to leave comments on the publication, you must sign in.