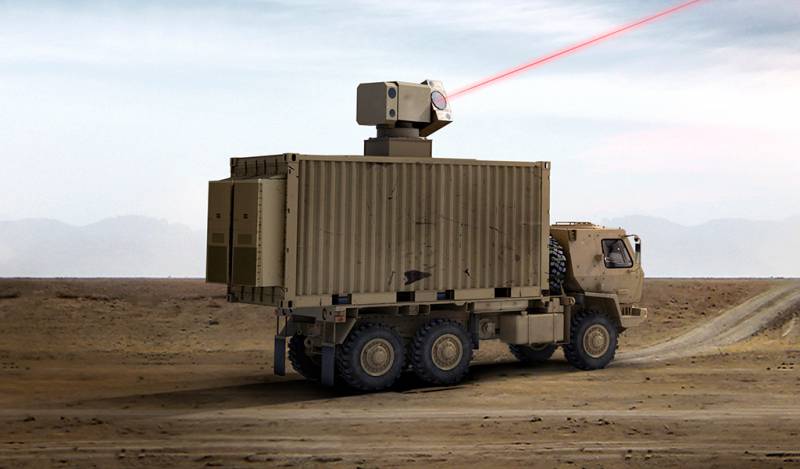 In the United States, work continues on the creation of a new laser weapons... One of the urgent tasks is the development of a combat laser with a radiation power of at least 300 kW and with the possibility of installation on different platforms. One of the participants in this program is General Atomics. She reportedly found the necessary solution and is now working on technical issues.

In October last year, the Pentagon announced the launch of a new laser weapons development program aimed at creating advanced combat systems with enhanced performance. Several scientific organizations and three commercial companies with extensive experience in the laser industry were involved in the work.

It was noted that existing combat lasers, suitable for mounting on ground, surface or air platforms, develop a power of no more than 100-150 kW, which is far from always enough to solve a combat mission. In this regard, the new program requires the creation of a complex with a radiation power of up to 300 kW with the same installation and deployment capabilities. Such characteristics will allow the laser not only to fight against optics and light UAVs, but also to hit more complex air targets.

The contractors were given three years to carry out all the necessary work - the finished laser should appear in 2022. Then, the development of real combat systems for the ground forces, the air force and the navy can begin. In addition, by this time the concepts of such systems can be submitted by the companies participating in the project.

In December, the head of the topic "directed energy" Thomas Carr, in an interview with Breaking Defense, revealed some interesting details of the project. He pointed out that all the developers of new weapons have abandoned chemical lasers in favor of electrical systems due to their greater efficiency. It also became known that two out of three new projects use existing technologies, and the third provides for the development of new ideas.

One of the participants in the new program is General Atomics. Until recently, she worked on a promising laser independently, using her own developments and ideas. However, the company recently decided to join forces with another organization to continue work and create new designs.

One of GA's HEL type lasers
In October, GA announced the start of an initiative project being developed jointly with Boeing. The result will be a battle laser based on scalable distributed pumping technology. The finished product will have a power of 100 kW, but in the future it can be increased to 250 kW. At the same time, the laser will have limited dimensions, optimal heat release rates and other characteristics that will allow it to be used on different platforms.

Foreign media reported that distributed pumping technology will be used not only in a new joint project. Based on these ideas, a 300-kilowatt laser will be created as part of the Pentagon's program. The unification of the two projects on key technologies will provide obvious advantages. In particular, the joint project of GA and Boeing to create a laser of lower power will test the technology and find ways to scale it up to the requirements of the military. And after that, submit a full-fledged workable sample to the army competition.

Fiber is used as an alternative to solid-state lasers. In this case, the beam is formed by optical fiber, which is easier to cool. Several fibers give out beams of limited power, and their combination allows you to obtain the desired characteristics of the entire complex. However, the creation of a system that combines multiple beams is a rather difficult task. In addition, GA calculations showed that a 250 kW laser requires approx. 100 fibers - this makes the laser overly complex.

General Atomics proposes to use several crystals in series, one after the other. The energy source must act on the first crystal and create laser radiation, which is immediately transmitted to the second element of the active medium. It amplifies the radiation and delivers it to the optical beam guidance system or to the next crystal. In theory, the technology allows three or more crystals to be connected in series - both on one line and using intermediate mirrors.

The distributed pumping laser is simpler and more convenient in terms of the arrangement of the aggregates. It becomes possible to create a more compact product with sufficient beam power. Also, excessively large and complex cooling means are not required. General Atomics notes that the resulting 250 or 300 kW laser is significantly smaller than one would expect.

To create a full-fledged combat laser complex, means of target detection and tracking are required, as well as guidance automation capable of keeping the beam on the selected object until it is hit. Similar technologies are already available and have been repeatedly tested in different projects. Moreover, such tasks can be simplified by reducing and lightening the emitter. At the same time, there are difficulties. Rough road, waves, etc. able to interfere with the retention of the aiming and make it difficult to hit the target. These issues need to be addressed.

Combat lasers from GA, created by order of the Pentagon and on an initiative basis, are planned to be used on land, at sea and in the air. Some concepts of this kind have already been shown, while the details of others have not yet been disclosed. In particular, it is not known how the new lasers will be used in aviation.

In all cases, a 300 kW combat laser will be used as a means of short-range air defense. Using the beam, it is planned to hit guided munitions, cruise missiles and aircraft of all classes that have passed through the areas of responsibility of other air defense components. In addition, the laser will provide protection against unguided rockets and artillery shells.

General Atomics' concept design for a land-based laser provides for the installation of all the necessary equipment in a standard container suitable for transport on different platforms. In this case, a rotating support with a laser is placed on the roof of the container. A complex of similar architecture, but without a container, can be used on warships.

The specifics of using the new laser in aviation are not disclosed. A similar complex is currently being developed in the form of a suspended container, but GA, apparently, has nothing to do with this project. Probably, the laser of the new type will only be able to be installed on an aircraft of the AC-130 type with a corresponding reserve of internal volumes and carrying capacity.

In the coming years, General Atomics can complete the development and launch an experimental laser based on the new technology with a power of at least 100 and up to 300 kW, which is notable for its small dimensions and weight. In 2022, this product will have to undergo comparative tests and demonstrate its advantages over two other developments, which will allow it to move to new stages of development.

It is noteworthy that General Atomics plans to use the new technology in two projects at once. Apparently, the company is confident in the correctness of its decisions and is ready to bring them to full operation. How right she is - time will tell. Tests of new samples for the Pentagon will begin in just a couple of years.