Hidden advantages of the Ukrainian "Alder-M" over "Tornado-S". How will the Tula gunsmiths answer? 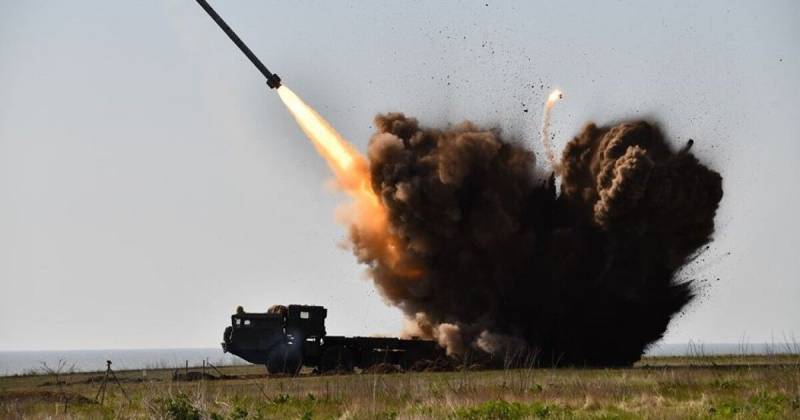 In the 76th and 63rd years, the most famous employees of the Tula defense enterprise died - the head of the technology department Valery Alekseevich Maslov, who was awarded the "Honored Mechanical Engineer of the Russian Federation" badge, and Vadim Rashitovich Alyazedinov, the chief designer of multiple launch rocket systems. In this connection, the administration and the author's community of the network information and analytical publication "Tula news"Expresses its deepest condolences to the family and friends of the world-renowned masters in the field of domestic rocketry.

In the same turn, one cannot but reassure the fact that, being in the above positions of the only enterprise in the Russian Federation in the development of modern long-range multiple launch rocket systems, Valery Alekseevich and Vadim Rashitovich made a truly gigantic contribution to the development and launch of the production line of modernized controlled 300 -mm long-range rockets 9M544 and 9M549 for integration into the ammunition load of promising high-precision MLRS 9K515 "Tornado-S".

To date, the "tandem" of the above missiles provides the rocket artillery divisions (READ) of the Rocket Forces and Artillery of the Russian Armed Forces with the possibility of maintaining parity in hypothetical "counter-battery duels" with mobile MLRS of the M270 MLRS / M142 HIMARS family, which are actively entering service with the 8th mixed artillery brigade "Alexandru Ioan Cuza" of the Romanian army and artillery regiments of the Polish army and equipped with modern 227-mm guided missiles M30A1 GMLRS, M31A1 GUMLRS "Unitary" and GMLRS + with a range of 90 to 120 km.

Unlike the 300-mm corrected missiles of an earlier modification with the 9M528 index, which have a range of only 90 km and are equipped with low-power tail gas-dynamic flight trajectory correction modules (pitch and yaw control) in the ascending and marching sections, promising guided missiles 9M544 and 9M549 are capable of inflicting decapitating strikes against the command and staff infrastructure and mechanized units of the enemy on the march at a distance of about 120 km with a circular probable deviation (CEP) of 5-10 m, surpassing in this parameter both the 9M528 corrected URSs and the advanced American M30A1 missiles and GMLRS +.

The increase in the range by 33% was achieved, firstly, thanks to the equipment of the above modifications of the projectiles with nose modules of aerodynamic rudders (their bearing surface significantly increased the aerodynamic quality of the URS, providing the effect of the so-called "sub-gliding"). Secondly, by integrating into their on-board radio electronic equipment promising blocks of the 9B706.1 control system, which have strapdown inertial navigation systems (SINS) SN398M based on computing units / BI616 on-board computer, as well as angular velocity and linear acceleration sensors from Scientific and Production center of automation named after N.A. Pilyugin ".

High-performance computing units BI616, based on the data of the above-mentioned linear acceleration measurement sensors (represented by "dry" pendulum accelerometers) and fiber-optic angular velocity sensors, as well as GPS / GLONASS modules (also integrated into the architecture of 9B706.1 blocks), carry out software construction the most optimal quasi-ballistic flight path of missiles 9M544 / 549.

At the same time, the software algorithms for the functioning of the BI616 computing units provide for a noticeable increase in the length of the marching section of the trajectory passing in the rarefied upper layers of the stratosphere (20-35 km), due to which the aerodynamic drag coefficient of 9M544 / 549 rockets continues to remain minimal, ensuring the preservation of a high supersonic flight speed up to the terminal section of the trajectory with a parallel increase in range up to 120 km (in comparison with the early modification of the 300-mm 9M528 corrected projectile). 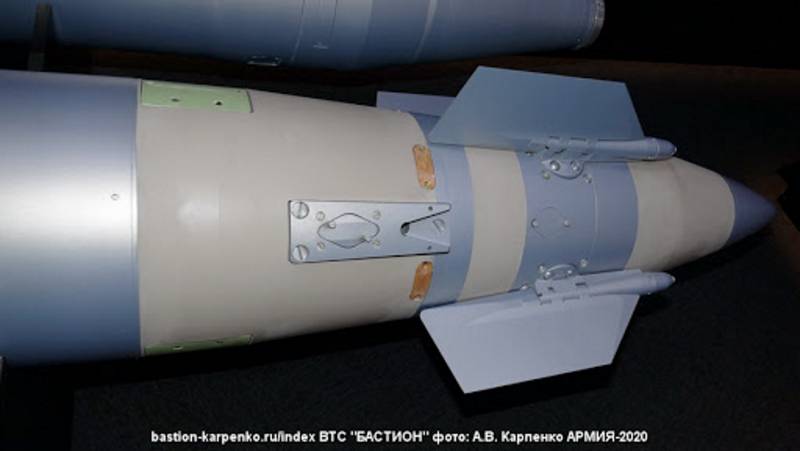 The placement of blocks of aerodynamic rudders in the bows of missiles of the 9M544 / 549 family assumes the implementation of the aerodynamic "canard" scheme. Source: bastion-karpenko.ru
It is thanks to the use of specialized modes of operation of the BI616 computing units, as well as equipping with advanced X-shaped aerodynamic rudders with high bearing qualities, that the 9M544 / 549 guided missiles were able to reach a range of 120 km, despite the mass similar to the 9M528 missiles (815 and 828 kg versus 800 kg, respectively), causing the use of similar solid propellant rocket charges.

As for the minimum circular probable deviation (CEP) of 9M542 / 544 projectiles, which is no more than 7-10 m (versus 150 m for projectiles of the 9M55F / K and 9M528 families), this indicator was achieved, firstly, thanks to orders of magnitude more filigree (accurate) operation of the above-described strapdown inertial navigation system CH398M in comparison with standard electronic time devices of 9M55F / K and 9M528 projectiles. Secondly, through the use of GPS / GLONASS radio navigation modules, which are not in the architecture of the avionics of the 9M55F / K and 9M528 projectiles). Thirdly, due to the possibility of using aerodynamic control surfaces in the terminal section of the trajectory (immediately before hitting the target), while the tail gas-dynamic nozzle blocks of the early projectiles provided correction only on the ascending branch of the trajectory.

Against the background of the embodiment "in hardware" of the above technological solutions, initiated by the teams of specialists from the Tula NPO "Splav" and the "Research and Production Center for Automation named after N.А. Pilyugin "within the framework of the formation of the project of the promising high-precision MLRS 9K515" Tornado-S ", cannot but attract the close attention of the expert and observing communities, similar activities of the State Kiev Design Bureau" Luch "(GKKB" Luch "), acting in the interests of the Pentagon and the US Department of State anti-Russian nationalist elite "square".

In particular, we are talking about the parameters of the Alder-M high-precision long-range multiple launch rocket system, which has reached the level of operational combat readiness, developed far from without information and technical support from the specialists of the American military-industrial corporation Lockheed Martin.

Despite the fact that the maximum flight speed (about 1000-1200 m / s), range (120-130 km), as well as the height of the apogee of the quasi-ballistic flight trajectory (25-45 km) of 300-mm guided missiles "Alder" M "are almost identical to the analogous parameters of the Tula rockets of the 9M544 / 549 family of the Tornado-S systems, the control system of Ukrainian rockets has a cardinal technological difference, which in the future (after loading additional flight modes into the drives of inertial navigation units) will increase the application efficiency strikes on objects covered by echeloned anti-missile "umbrellas".

We are talking about equipping guided rockets "Alder-M" not only with nose blocks of aerodynamic rudders, but also with "gas-dynamic belts" of transverse / momentary control engines (DPU) of impulse action, placed in front of the centers of mass of the rockets.

These "gas-dynamic belts" DPU are represented by 90 nozzle modules, "powered" from one or more gas generators by means of 90 capillary gas ducts, each of which is equipped with a high-speed gas distribution micro-valve with a programmable electromagnetic throttle valve drive. Filigree precise commands received by drives of certain groups of throttle valves from the inertial navigation unit of Alder-M rockets with a frequency of 1000 Hz ensure the implementation of lightning-fast transverse throws on the trajectory with its immediate correction.

It is most likely that the current version of the software of the inertial navigation units installed on the promising 300-mm Alder-M projectiles provides for the use of “gas-dynamic belts” only to correct their flight paths in the ascending and marching sections.

Gas-dynamic belt "transverse control engines (moment action), located in front of the center of mass and aerodynamic focus of the Ukrainian missile" Alder-M ". A similar configuration is used in the American anti-missile MIM-104F PAC-3MSE. Source: defense-ua.com
In turn, loading the Alder-M shells into the INS with additional software add-ons will make it possible to use these "belts" for carrying out intensive anti-aircraft maneuvers with G-forces of 35–55 G at the terminal section of the trajectory. This can significantly complicate the process of intercepting them by means of such domestic anti-aircraft missile systems as the S-300PS / PM1 and Buk-M2.

The implementation of this technological "trump card" is quite solvable. Indeed, in the program for the development of the above-described "gas-dynamic belt" DPU for Ukrainian rockets "Alder-M" with 100% probability, specialists from the corporation "Lockheed Martin" took part, who had previously carried out the project and launched a more complex "gas-dynamic belt" 180 nozzle blocks) to equip MIM-104F PAC-3MSE super-maneuverable anti-aircraft interceptor missiles, included in the ammunition of the Patriot PAC-3MSE anti-missile systems.

It is obvious that the employees of the Ukrainian GKKB "Luch" did not have the appropriate critical technologies and the proper experience to develop a high-performance on-board computer that would ensure the precise functioning of such a complex unit as the "gas-dynamic belt" of the DPU.

Meanwhile, the relevant developments within the framework of the second stage of deep modernization of the Tula long-range missiles 9M544 / 549 can be put into operation by the design department of NPO Splav named after A.N. Ganichev ".

So, in the course of preparing the analytical material "Analysis of the possibility of increasing the firing range of promising guided missiles for domestic multiple launch rocket systems" for the network scientific publication "Aerospace Scientific Journal", the specialists of the Moscow State Technical University. N.E. Baumana Vladimir Nikolaevich Zubov and Pavel Fikretovich Dzhevanshirov came to the conclusion that the range of the Smerch / Tornado-S MLRS can be increased by developing and integrating into their ammunition advanced guided missiles equipped with integral ramjet rocket engines (IRPD), located in the tail parts of the products.

Indeed, the specific thrust impulse is of the order of 500-700 s, as well as the possibility of prolonging the burn-out period of the solid propellant charge of solid propellant rocket engines due to the regulation of the intensity of its supply to the combustion chamber of the IRPD, will increase the range of action of the improved 300-mm rockets by 1,8-2 times (with 120 to 220–240 km), giving a huge head start to the Ukrainian Alder-M missiles, as well as the promising American 227-mm guided missiles GMLRS +.

At the same time, Vladimir Nikolaevich and Pavel Fikretovich missed an extremely important detail in their material ... 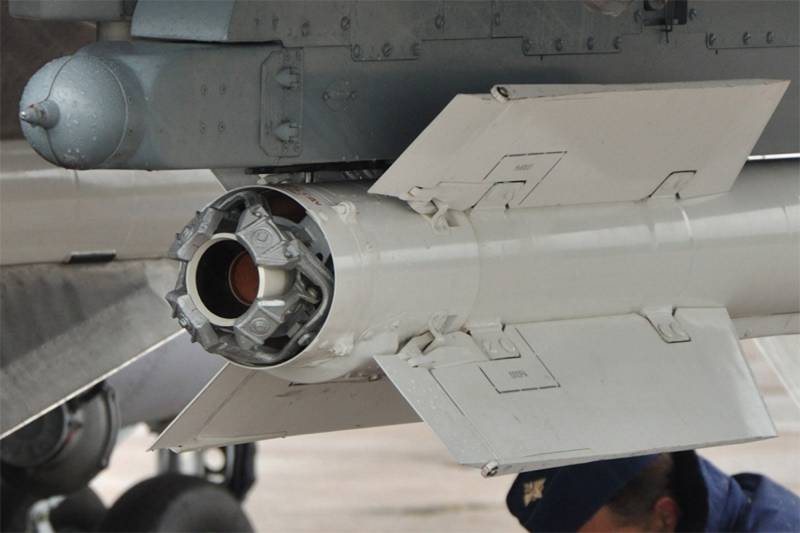 The block of the interceptor thrust vector deflection system, located in the tail section of the R-73RMD-1 close air combat missile. Similar blocks can be integrated into the nozzle channels of the combustion chambers of integral RPDs of advanced 9M528 / 549 rockets. Source: pfc-joker.livejournal.com
We are talking about the possibility of equipping advanced versions of 9M528 and 9M544 / 549 rockets not only with ramjet engines, but also with interceptor thrust vector deflection systems (OVT), which also provide the ability to perform anti-aircraft maneuvers.

The possibility of prolonging the burnout period of the IRPD solid propellant charge up to the terminal section of the trajectory will ensure the preservation of the efficiency of the operation of the heat-resistant planes of the OVT system at the moment the missile enters the zone of the enemy's anti-missile defense. That will be an excellent help for the improved Tula 300-mm rockets in "breaking through" the enemy's powerful anti-missile barriers.

Ctrl Enter
Noticed oshЫbku Highlight text and press. Ctrl + Enter
We are
Results of the week. "- Guys! Will live!"Situational analysis of the death of the MH17 flight (Malaysian Boeing 777), made on the basis of engineering analysis from 15.08.2014
Military Reviewin Yandex News
Military Reviewin Google News
67 comments
Information
Dear reader, to leave comments on the publication, you must sign in.