Donbass Chernobyl and flooded mines. Is an environmental disaster possible in the LPR 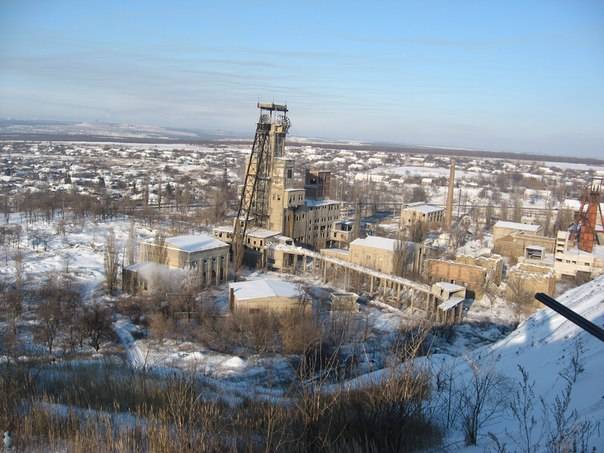 In those rare days when the drain of Novorossia temporarily stops, and the armed (invincible Bayraktar) Ukrainian Armed Forces stop the offensive in the Mariupol direction, the headlines of the Ukrainian media (and, what is most unpleasant, also local republican and even Russian media) are filled with news of the imminent impending apocalypse in the Donbass. He supposedly inevitably is about to come. And if not from depressurization of the "Cleavage" facility, then in connection with the poisoning of groundwater, provoked by the flooding of mines.

It got to the point that the shallowing of reservoirs and rivers was directly linked by pseudo-experts to the flooding of several mines in the LPNR. The fact that in 2020 there was practically no precipitation, as well as reports of the shallowing of reservoirs in the Kuban, Crimea and Ukraine, did not convince the harbingers of the apocalypse that their hypotheses were inconsistent. And really - what kind of Kuban is there ... If it is possible to arrange a triumph of clickbait (the growth of income from online advertising), blaming the "Russian occupiers" or "criminal regime" and Moscow for the impending environmental disaster?

As for the object "Cleavage", already euphoniously named "Donbass Chernobyl" in advance, it is a favorite bogey of the local journalistic community. It is taken out of the bins in those days when there is nothing more to write about, but it is very necessary. The catastrophe, as usual, is endured every time.

But in the current difficult political situation, "Cleavage" has become a real find. And for Ukrainian journalists in a hurry to celebrate the imminent departure of the LPNR to hell. And for the "patriotic sentries" - as an impeccable proof of the criminal negligence of local authorities and the malice of the Russian government.

The phenomenon is indeed potentially dangerous in nature and is fraught with subsidence of the soil and the appearance of faults, from which methane can be released, flooding, as well as poisoning of groundwater.

At the same time, it should be admitted that this problem is by no means new - practically in every city of Donbass there are 1–2 flooded mines. Moreover, SES has been publishing reports for decades that the water in the wells and reservoirs of Donbass is not suitable for drinking or bathing.

But the population continues to drink this water, fish, and swim. And the promised disaster never came.

As of October 2014, coal was mined in LDNR at 43 out of more than 160 mines. In the territory occupied by Ukraine - 24 out of 93. The rest of the facilities were stopped for various reasons. (Many of them were decades before the conflict).

Fortunately, there were no man-made and environmental disasters. By the way, mine drainage is an expensive pleasure. Miners say that this process has always been a fertile field for corruption and embezzlement. After all, it is impossible to really control how much water is pumped out of a stopped mine.

On September 16, 1979, at the Yunkom mine, not far from Yenakiyevo (DPR), in order to prevent methane and coal emissions at a depth of 903 m, a nuclear explosion with a capacity of 0,3 kilotons was made. The experiment was a failure.

In 1980, 66 miners died from a methane explosion at Yunkom. The cavity formed after the explosion was filled with liquid glass. And the experiment itself was classified until 1990. Since then, he has made local journalists happy.

Despite the fact that measurements of radiation 15 meters from the capsule filled with glass, show indicators within the normal range. And in the mine, mining was carried out for a long time.

Of course, the ignorance and professional worthlessness of journalists and network pseudo-experts (who linked the possible depressurization of the liquid glass capsule with the flooding of the mine and praised the Cleavage object as something unique) can only be sympathized with.

When the glass sarcophagus will be depressurized - no one knows. And this factor does not at all depend on whether the mine is flooded or not. Moreover, more than 120 nuclear explosions were made on the territory of the former USSR for various purposes. And their results (despite the absence of a sarcophagus) did not lead to serious negative consequences.

Yes, Cleavage is not unique.

In the USSR, the peaceful atom was used for many purposes. Thus, in 1965-1988, 124 industrial nuclear explosions were carried out in the Soviet Union to create underground storage facilities, canals, reservoirs, extinguish gas and oil flares, develop fields, seismic sounding of the earth's crust, etc.

A 1994 study by the TsNIIatominform showed hanged radiation levels in 24 of 115 locations tested. However, no one has heard of a major contagion disaster, and hopefully never will.

I would like to believe that the depressurization of "Cleavage" will happen someday. But painless for people and the environment. At least there is no reason for panic today. Moreover, because of the flooding of mines. Which, in general, is a common practice for Donbass.

The problem is that people have grown quite fond of being scared in recent years. And the media (which should have conveyed objective information to the audience) have turned into a continuous yellow press. Which, like a baby, pulls all kinds of nasty things into your mouth.

Frankly speaking, the LDNR, even without nuclear waste and toxic contamination, has enough reason to worry. What is at least the amount of mines and ammunition that lie in the long-suffering land of Donbass!

As for alarmists from the journalistic community, it would be high time to introduce both in Russia and in the republics, at least administrative responsibility for the spread of disinformation and alarmism.

Note. Alarmist (French alarmer - to raise the alarm). A person prone to spreading disturbing (but usually unfounded) rumors, an alarmist.

However, those who want to believe in the end of the world will see signs everywhere. And without media.