“I got to Washington from Arizona in ten days. Fiction!" 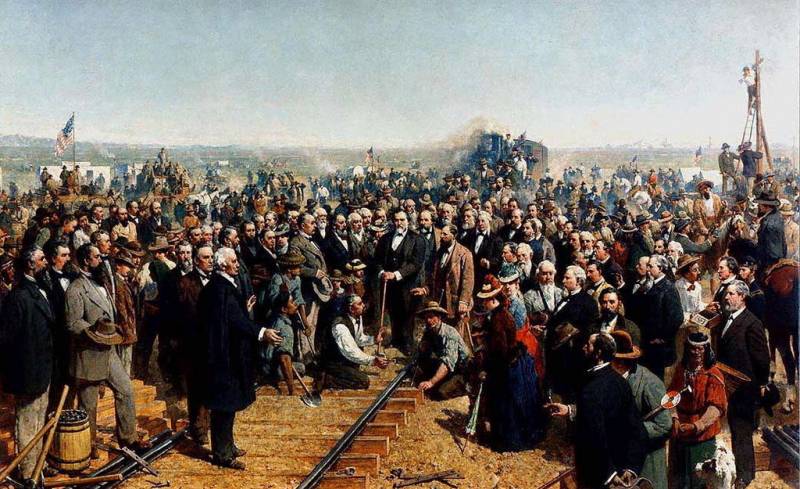 “It's also surprising how quickly the US recovered.
after the civil war - just instantly
by historical measurements! "
Tlahuicol

Paradoxes of history. Some time ago I watched the 1964 American film "Sound of a Distant Trumpet" - a pretty well-shot western in the style of "army", where horsemen gallop across the prairie in real time, the US Army cavalry all polls firing at the Indians from the 1875 Winchesters, but dusty after the race pretty well, and where even Alexander Bell's first telephone was shown. There this phrase sounded (and is remembered!), Which became the title of the article.

A question from readers to historians

And just then there was no invention. For the beginning of the 80s of the XIX century, this was an excellent result for traveling ... by rail! This is the "first".

The "second" happened a little later and became the epigraph to this article. It's just that sometimes, and quite often, VO readers ask questions so interesting that they become topics for new articles. This is the question - what is the reason for such a rapid recovery of the US economy after the war? - is also very interesting from all points of view, and besides, it also touches on such an important thing as the process of historical knowledge. And if so, why not answer it?

Although one should not think that this interested only one of the VO readers. It turned out that there, overseas, there were also historians who were also interested in this very question. And they began work on collecting and processing information that would give a concrete answer to it. 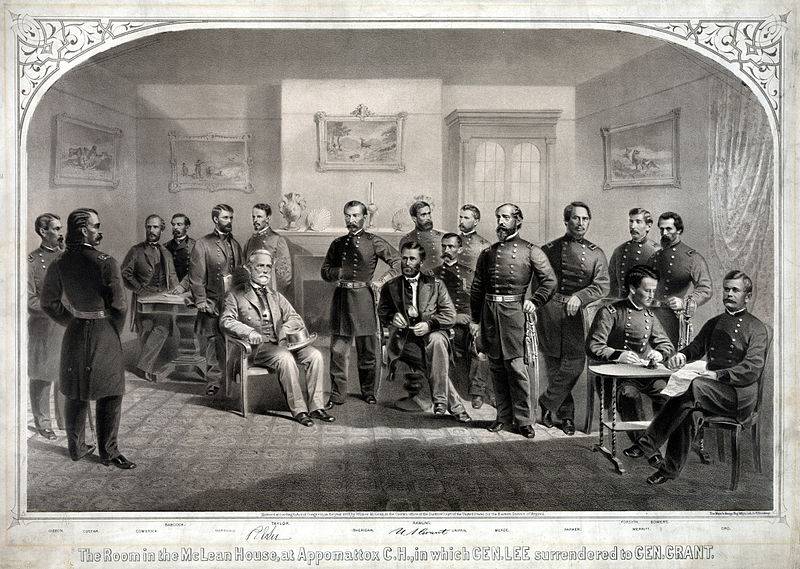 End of the American Civil War: General Lee's surrender at Appomattox. Depicted from left to right: John Gibbon, George Custer, Cyrus Comstock, Orville Babcock, Charles Marshall, Walter Taylor, Robert Lee, Philip Sheridan, Ulysses Grant, John Rawlins, Charles Griffin, Chamberlain? George Mead, Eli Parker, James Forsyth, Wesley Marritt, Theodore Bowers, and Edward Orden. Library of Congress
And the first, perhaps, among them is R.V. Vogel, who received the Nobel Prize in 1993 for his cycle of studies in cliometry. This is a science, the foundation of which is based on the generally quite banal idea that the past leaves us much more information than historians who use only traditional methods of historical research in their work are accustomed to believe.

For a long time, such huge layers of oral as well as written sources, such as tax and customs declarations, registration records in church books of parishes and monasteries, denunciations of sexists, documents of draft commissions, etc., were not taken into account, since all this accounted for process manually.

Note. Cliometrics is the systematic application of mathematical methods in historical research. 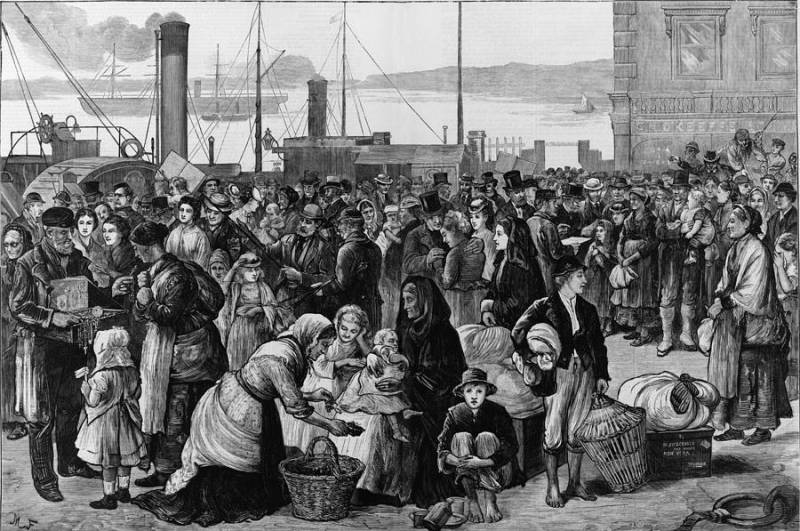 Expats arrive in the United States. XNUMXth century engraving Library of Congress
The use of cliometry methods in Russia has also brought many interesting discoveries. For example, we began to analyze data on the average height and weight of conscripts, taken from the summary documents of the draft commissions. Until then, it was believed that Russia before the revolution was starving and almost dying out, but the development of capitalism only enriched the top.

So, the data on the biological indicators of conscripts in the Russian army clearly proved that from year to year the growth, weight and muscle mass of conscripts increased! (Why? From hunger or from the wind?) No, only because people ate better and better every year. The years of crop failures were also quite clearly correlated in these documents with the decrease in the weight of conscripts. That is, the famine in Russia under the tsar does not deny these data. But the fact that the common people (who were the main supplier of soldiers) lived better and better year after year is an indisputable historical fact.

Another thing is that the rise in the standard of living was perceived (as it is today) as a given and lagged behind the people's aspirations. And, by the way, it was precisely this lag that gave a real chance to take power into their own hands for those who promised to speed up this process. That's all there is to it. 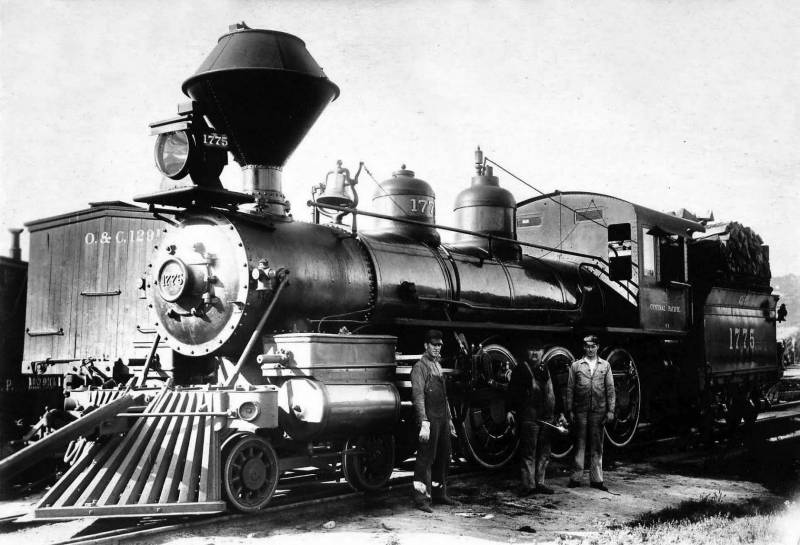 American steam locomotive of the transcontinental railroad. This is how we know him from the movie "Back to the Future" and from many westerns. 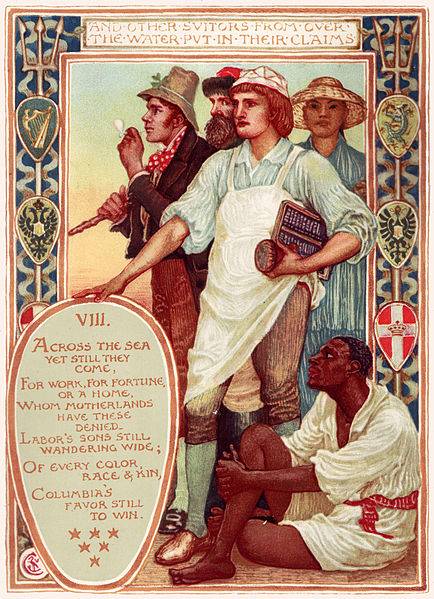 Poster by Crane Walter (1845–1915), dedicated to the emigration to the United States from Europe. Library of Congress
The fact is that many poor people from Europe came to fight in the States. They were attracted by the rather high wages and the opportunity to get homestead.

The Homestead Act was passed on May 20, 1862. And, according to this document, every US citizen who has reached the age of 21, who did not fight on the side of the South against the North, had the right to a plot of land of no more than 160 acres (which was equal to 65 hectares).

It was enough to pay a fee of $ 10, and the land was yours. The law came into force on January 1, 1863. And, of course, he attracted a huge number of European emigrants to the side of the Union. 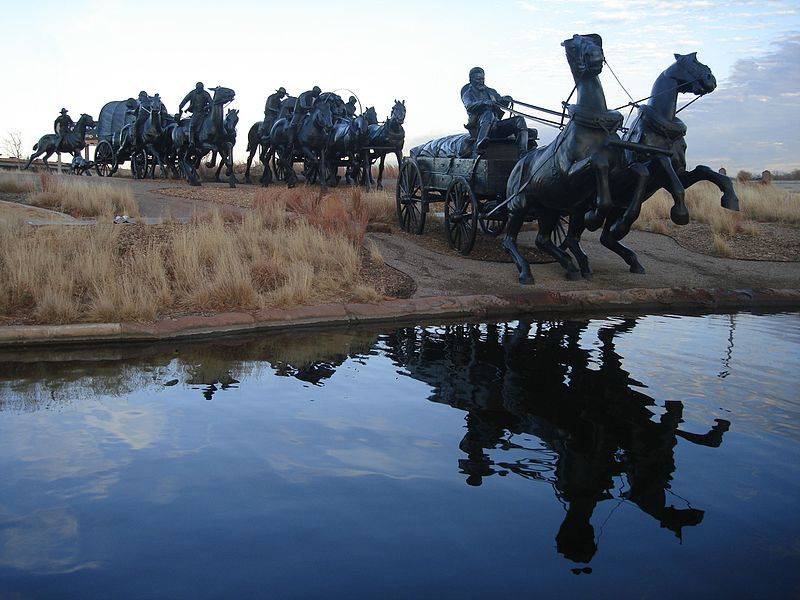 Monument in Oklahoma City, erected in memory of the Race for the Ground.
According to the same law, if you started cultivating the land and erected some kind of structure on it, then it became yours completely free of charge after 5 years.

But you could have acquired the land before the expiration of this period, paying $ 1,25 per acre.

On the basis of the Homestead Act, about 2 million Homesteads were distributed in the United States, with a total area of ​​approximately 285 million acres (or 115 million hectares), that is, 12% of the entire country. 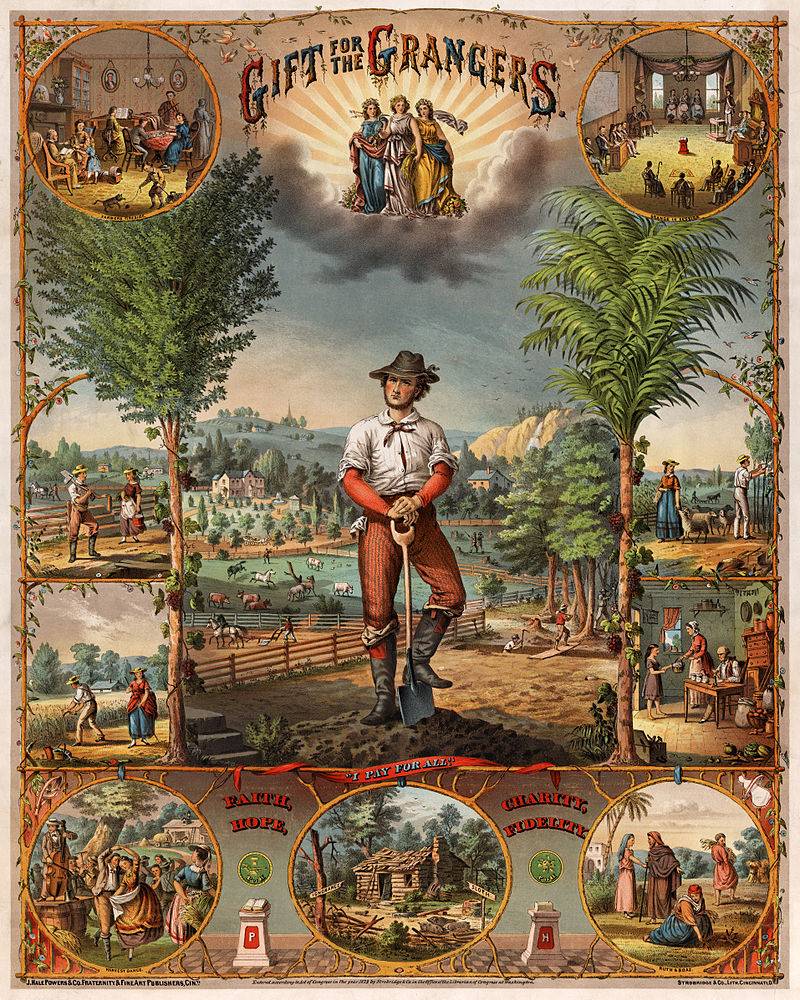 Poster for the political union of American farmers Grange, 1873 Library of Congress.
Such an impressive economic event largely eliminated the surplus of human resources that formed in the country after the end of the Civil War and the demobilization of the army. Well, the very process of how people got land in Races for Land (which were arranged in cases where the demand for land in certain states exceeded supply) is very well shown in the movie Far Country with Tom Cruise and Nicole Starring Kidman. 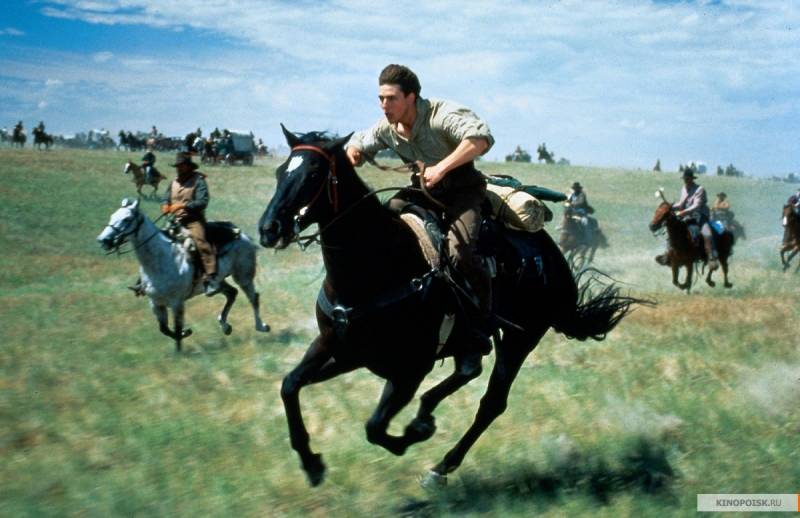 That's how they rode! Tom Cruise. A still from the film "Distant Country". Kinopoisk.ru 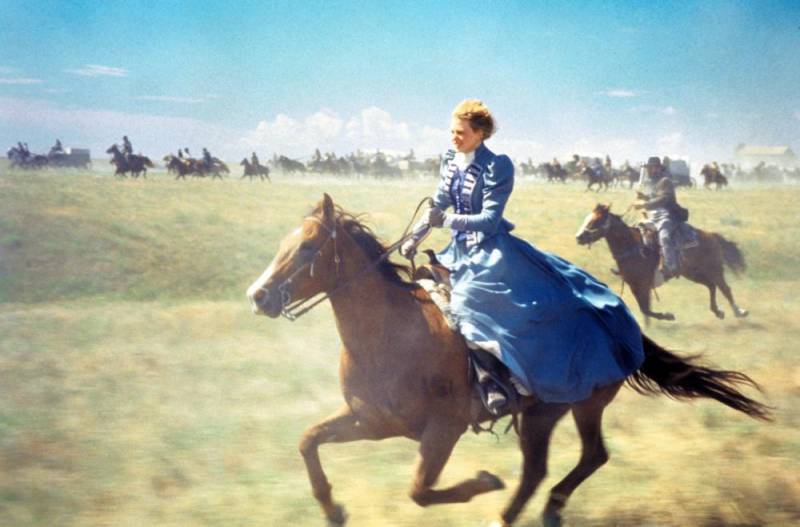 ... And Nicole Kidman.
However, this unprecedented action (very useful for the country in the future) could not cope with the surplus of labor. And it's not about the blacks, which some commentators have written about as cheap labor. No.

Most of the negroes stayed in the South, familiar to them. Nobody needed them in the North - after all, they could not do anything. They could not compete with whites in factories and factories. Well, perhaps they were taken with pleasure as loaders and in negro orchestras. The women went to serve. But on the whole, this was not the contingent that could seriously influence something in the North.

But the demobilized soldiers could ... Moreover, not all of them dreamed of land and wanted to cultivate it. What was to be done with these? And also it was impossible to forget about the interests of the industrialists who produced weapon... And suddenly - bam, this weapon was no longer needed. 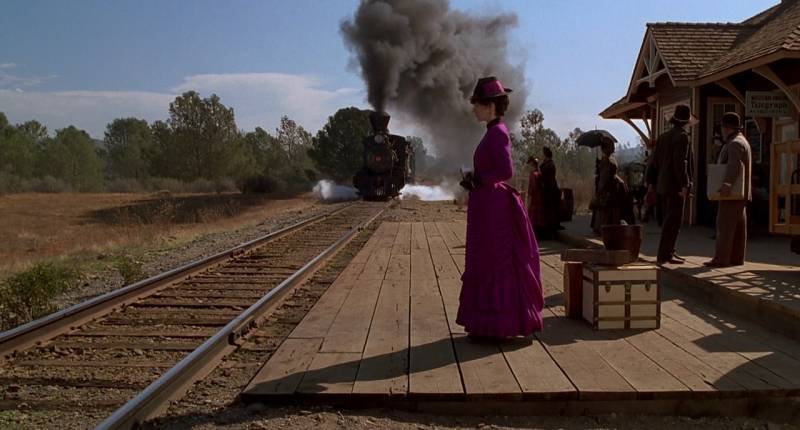 Such railway stations appeared all over the country and connected it into one whole. A still from the movie "Back to the Future-3".

The iron recipe for instant recovery

A way out was found in the construction of railways and, above all, a transcontinental highway across the country. During its construction, workers were paid huge money for that time - $ 2 a day. That is, as much as a cowboy cook. But in the highlands, they refused to work.

And then, for the first time in the United States, Chinese were brought in in large quantities, who agreed to work for just $ 1 a day.

Moreover, today it has been found out that in fact this construction of a transcontinental highway across America was lobbied precisely by the large arms and steel enterprises of the United States, which did not want to lose both their profits and production capacity.

The social aspect, of course, also took place. After all, the workers of the military factories were threatened with dismissal of the transition to a peaceful track. Since the army, in fact, was disbanded. And so, in order to avoid a social explosion, these people were deemed necessary "to do something useful". 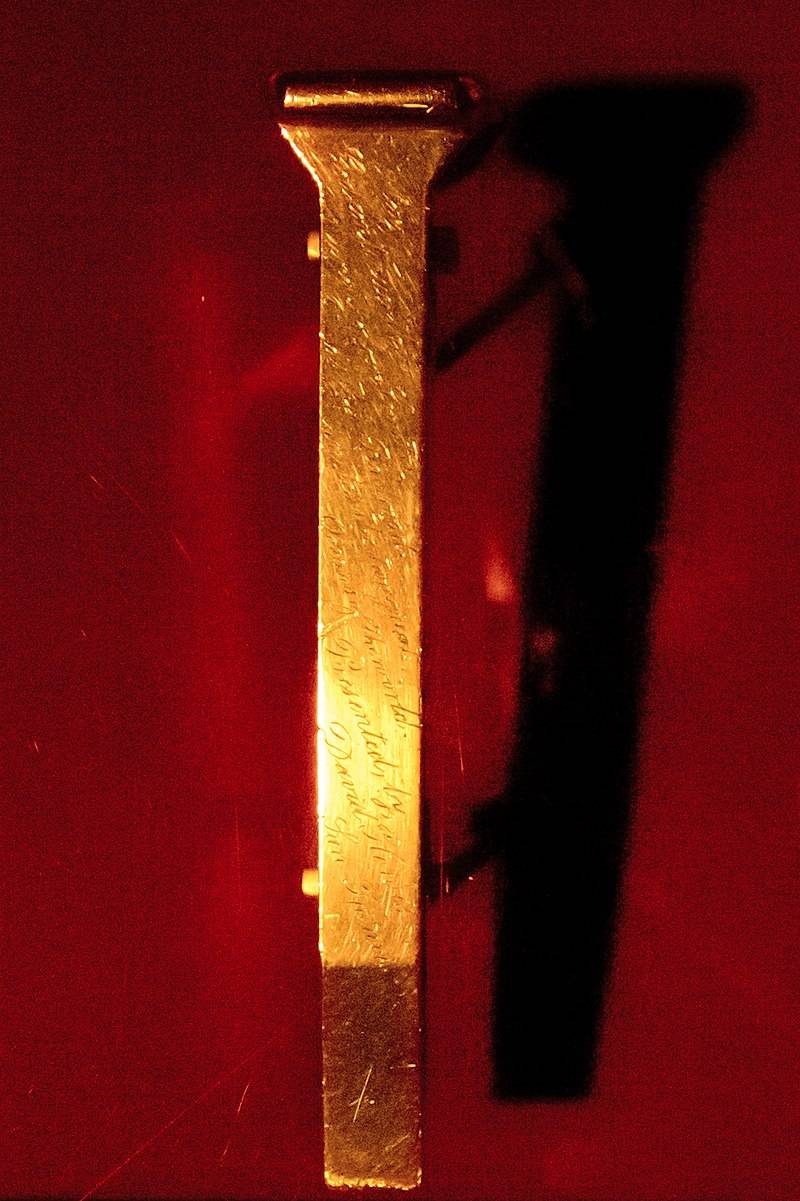 The legendary "Golden Crutch" is the last railroad crutch that Leland Stanford, the head of the railroad company, hammered on May 10, 1869, during a ceremony to connect the two Central Pacific Railroad and Union Pacific Railroad lines in Promontari, Utah. Which led to the creation of the First US Transcontinental Railroad. Located at Stanford University's Iris & B. Gerald Cantor Center for Visual Arts.
By the way, why did the first American railways go not along the shortest routes, but like hares zigzagging along the prairie?

The reason is simple: the agents of the railway companies, who immediately appeared like mushrooms after the rain, demanded money from the mayors of cities or a deed of purchase for the land. Whoever gave them money - they led the way there. And to those who did not give - they explained that "there will be no road, there will be no prosperity." The road bypassed these cities, and very soon they simply died.

In fact, it was an artificially organized scam of a gigantic scale. And at first, even without any special economic benefits. Since people did not immediately use the railways.

But then, when they finally began to be used, then a secondary boom in the construction of railways began.

This is how the United States (and first of all, of course, the North) overcame the dire consequences of the Civil War for its economy.