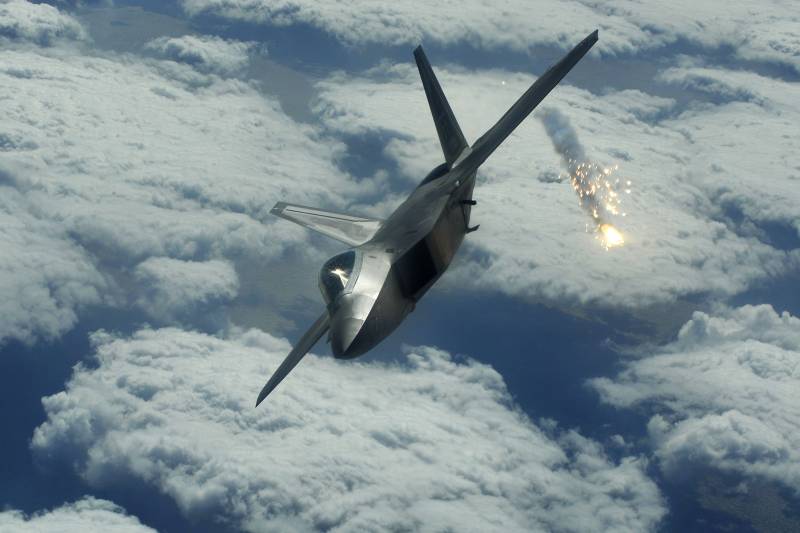 F-22A in flight. Photo by US Air Force

To date, only three types of 5th generation heavy fighters have been created and put into production. The American F-22A, the Russian Su-57 and the Chinese J-20 are at various stages of production and operation. Despite belonging to the same generation and class, these machines differ markedly from each other. Their developers fulfilled different requirements and implemented different concepts - which led to known results.

The main difference between the three projects of the latest generation fighters at the moment is their number and status. Thus, the United States began work on the 5th generation earlier than other countries and was the first to receive the finished aircraft. Serial production of F-22A fighters was completed back in 2011, when competitors were just beginning to test their machines.

The Pentagon planned to take full advantage of the gap from other countries to build a major fleet F-22A. However, in the future, the production program was reduced several times, and the Air Force received only 186 production aircraft. Only a few years after that, China began producing its J-20 fighter. According to various reports, at least 50 of these machines have already been built. Russian industry, in turn, is in no hurry. Now the construction of the first serial samples is underway, which will be transferred to the Aerospace Forces in the near future. 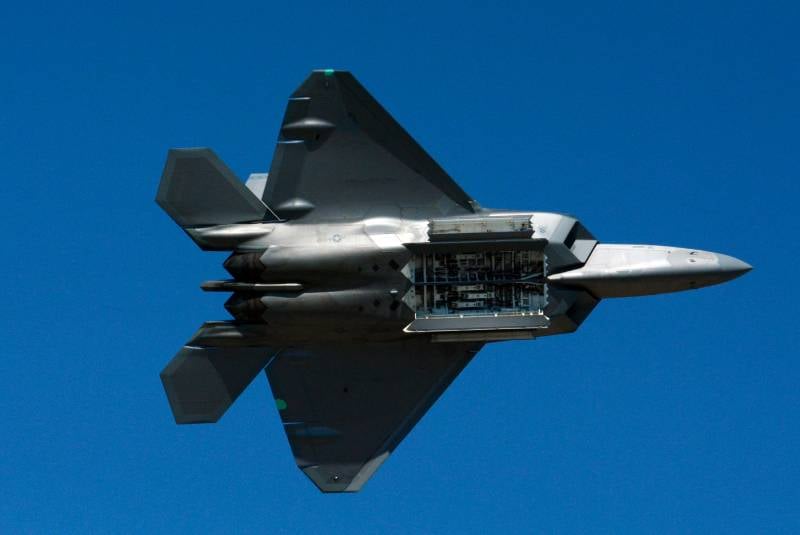 F-22A with open cargo compartments. The shape of the controlled engine nozzles is also visible. Photo Wikimedia Commons
It should be noted that the marked difference in “age” affected the progress of the projects. The USA had to independently gain all the necessary experience and look for the required solutions. Lagging by several years, China and Russia could take into account certain aspects of American work and adjust their plans accordingly. In addition, the three projects were initially based on different requirements, which was associated with different needs of the Air Force.

As a result, three modern 5th generation heavy fighters differ markedly from each other, both externally and internally. Let's consider their main differences in appearance, as well as their technical and conceptual reasons.

Airplane as a platform

The aircraft in question are stealth twin-engine fighters with a number of similarities and differences. So, the projects are united by the idea of ​​building a glider from metals and composites, which gives an optimal ratio of strength and weight. In addition, similar solutions were used to reduce visibility, engines with a controlled thrust vector, etc. 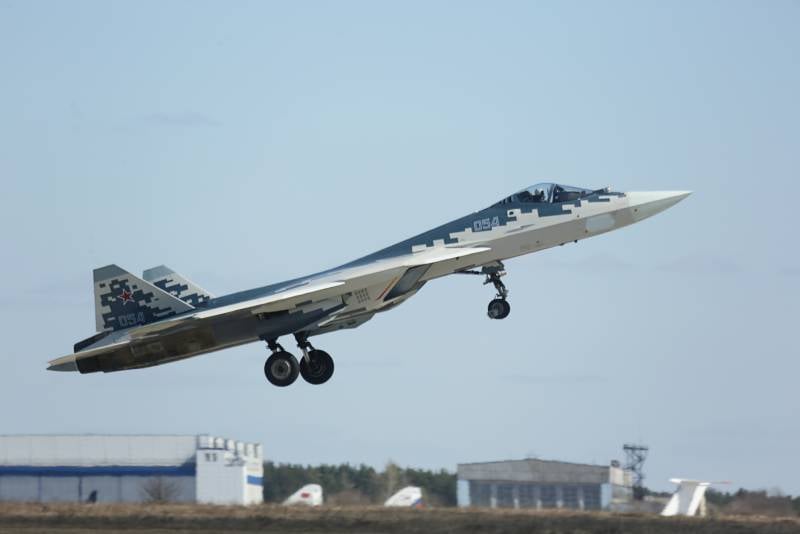 Su-57 on trials. Photo of UAC
When developing the F-22A, stealth was one of the main goals, which affected the appearance of the aircraft. Such requirements led to the formation of characteristic contours and some features of the internal structure of the structure. In addition, the aircraft received a special radio-absorbing coating.

The foreign press mentions that during the creation of the J-20, measures were also taken to reduce the visibility, but they are not as effective as in the case of the F-22A. There are no precise data on the parameters of the Russian Su-57's signature, and the available estimates vary greatly. At the same time, it is believed that during the development of this aircraft stealth was not a key characteristic, and for the sake of it they did not sacrifice other parameters.

The F-22A, Su-57 and J-20 have high performance twin-engine power plants. The thrust-to-weight ratio is greater than one, which is necessary for the growth of flight data. In a number of modes with the correct selection of the load, all three aircraft can perform supersonic flight without switching on the afterburner. 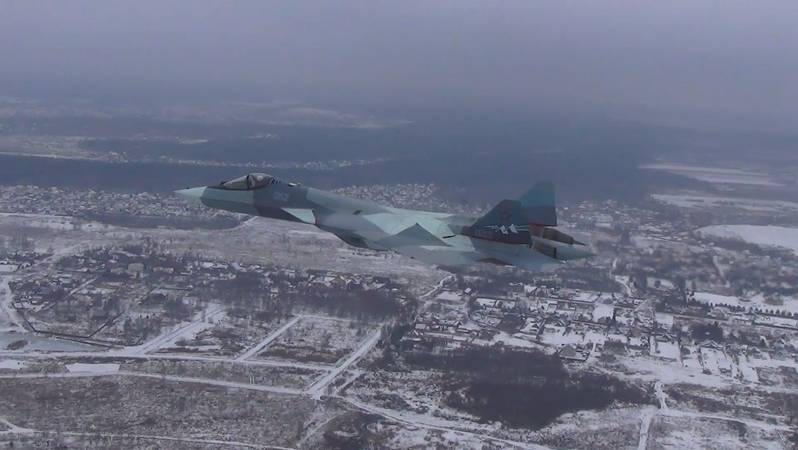 Experienced Su-57 with two types of engines. Photo of UAC
One of the main requirements for the Su-57 concerned super-maneuverability. A key component for solving this problem was the thrust vectoring engine. The AL-41F1 and Product 30 engines are capable of deflecting the vector in two planes, which in the required way affects the maneuverability. In the American project F-22A, two-plane vector control was considered unnecessary and threatening stealth. Consequently, the Pratt & Whitney F119-PW-100 engines have a flat nozzle that moves vertically only. Until recently, the Chinese J-20 was equipped with engines without thrust vector control. In the latest versions of the project, WS-10B-3 products are used, capable of providing super-maneuverability.

The aircraft in question received the most modern electronic equipment developed in three countries. Fully digital sighting and navigation systems, radar with AFAR, "network-centric" means of data exchange, etc. are used. There are important innovations. For example, the Su-57 uses a set of separate antennas to complement the main radar. The "glass cockpit" has long become the standard for modern fighters, and the machines in question are no exception.

American F-22A and Russian Su-57, despite development aviation means of destruction, retain built-in guns. The Chinese military and engineers adhere to different concepts for the development of aviation, which is why their new generation fighters do not have guns. 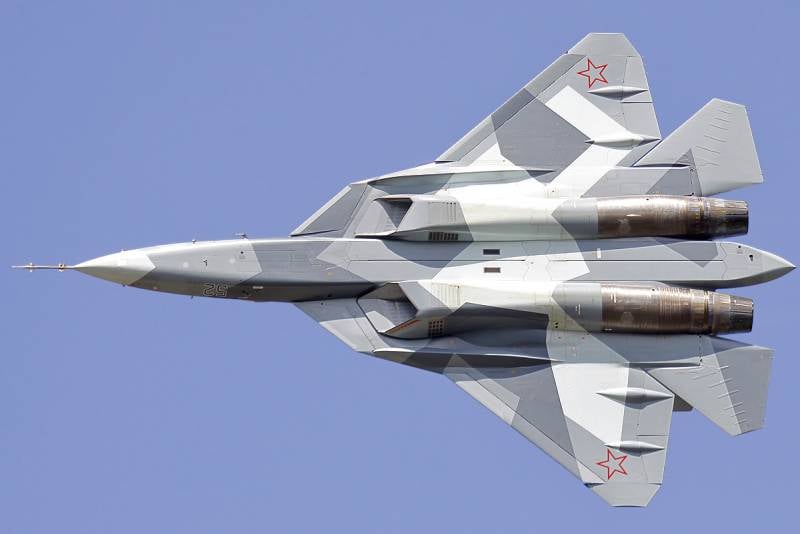 Bottom view. The configuration of the main cargo bays can be considered. Photo Wikimedia Commons
To ensure stealth, 5th generation fighters must carry missile and bomb weapons in their internal compartments protected from radiation. Thus, the F-22A has a large central cargo bay with 6 suspension points. On the sides of it there are two additional compartments, one missile each. Four removable pylons can be installed under the wing. The Russian project Su-57 provides for the placement of two large main compartments along the fuselage. There are two additional compartments in the center section. It was reported that there are 8 suspension points in four compartments. The same amount is installed under the wing if necessary. The J-20 is similar in design to the F-22A and is capable of carrying at least 6 air-to-air missiles or otherwise weapon... There are 4 additional suspension points under the wing.

The sighting systems of all three fighters were initially compatible with modern aircraft weapons. Measures were also taken to ensure easy and fast integration of new designs. Some new types of missiles and bombs were originally created taking into account the characteristics of the 5th generation fighters.

Thus, the three 5th generation heavy fighters, having common features, differ significantly from each other in key features and characteristics. The reasons for this are simple: the military of the three leading countries have different views on the development of fighter aircraft and put forward different requirements. 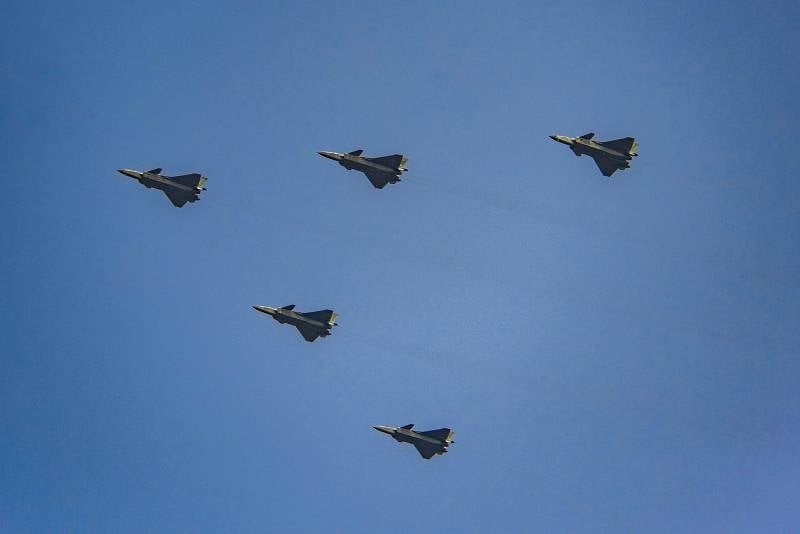 Chinese J-20 in flight. Photo Wikimedia Commons
The goal of the American project was to create a fighter capable of invisibly approaching a target at an attack distance using long-range missiles. Combat at shorter distances and work on ground targets were not excluded, but were never considered as the main functions. For this reason, the F-22A has a distinctive appearance and does not show super-high maneuverability, although it is capable of carrying a significant amount of ammunition.

The Russian fighter of the new generation Su-57 was created as a universal vehicle for long-range and close combat, as well as for engaging ground targets. As a result, flight and maneuverability characteristics, sighting system and weapons were given high priority. To some extent, they sacrificed stealth.

The exact goals of the developers of the Chinese J-20 are unknown, but the appearance of this machine serves as a transparent hint. It seems that the basic concept of this machine is a cross between Russian and American. Both long-range and close air combat are a priority. For this, the aircraft carries advanced avionics and weapons, and also has a characteristic aerodynamic design that increases maneuverability. The potential for percussion work is questionable. 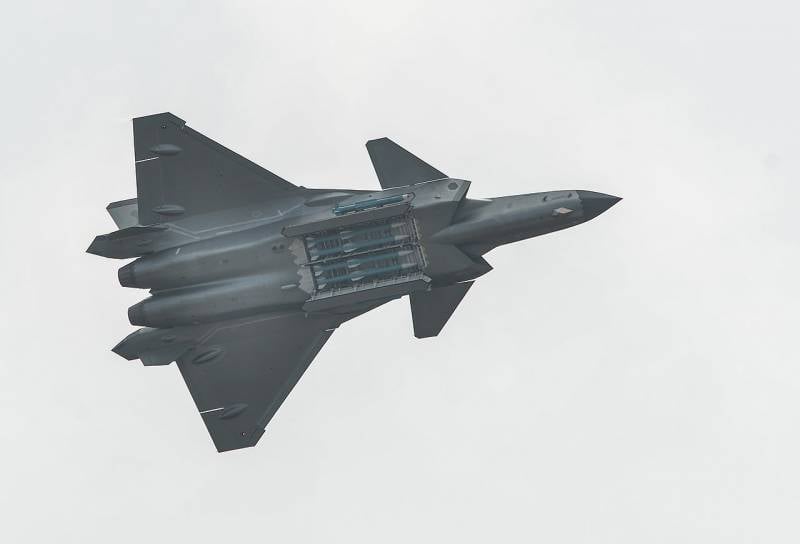 J-20, bottom view. The features of the aerodynamic shape and the configuration of the weapon bays are visible. Photo Wikimedia Commons
With all this, cost issues should be considered. The highly advanced and sophisticated F-22A turned out to be too expensive even for the United States, because of which the production program was cut several times. The Russian Su-57 has already gone into production, but its cost remains a topic of controversy and a potential risk. China seems to have found opportunities for mass production of its J-20, but what the final number of such equipment will be is a big question.

It should be recalled that the F-22A, Su-57 and J-20 are not the only fighters of the latest generation. It also includes a number of other developments, both brought to the series and remaining at the design stage. All of them are created in different countries according to their own requirements - and they also differ from each other, despite certain similarities and common points. In addition, research on the next 6th generation has already begun, and the results of this work in different countries will again be different. Time will tell what paths the further development of fighters will take, and how current developments will affect it.