Who benefits from the civil war in Russia 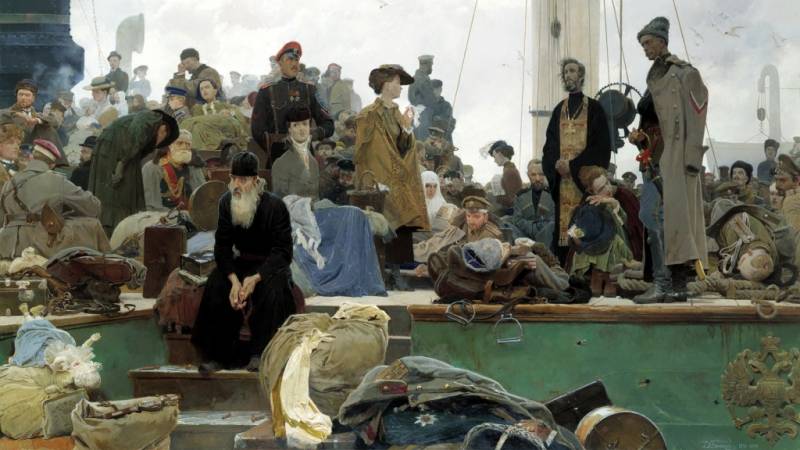 Unlearned lessons of the past threaten a lot of blood in the future. The conditional moment of the end of the Civil War in Russia is November 1920. The exodus of Wrangel's army from the Crimea to Constantinople. However, 100 years have passed, several generations have changed, and the cold civil war is rekindled by some.

В stories bloody civil wars (happened and more than once) took place in almost all leading countries of the world. Among them are Germany, England, France, USA, Vietnam and China. However, usually, after a generation (20-30 years), all the "dots above and" were put. And after another generation, such a war became a long history. Even then, it was usually only of interest to historians. The heroes (or antiheroes) of the revolution were already perceived as mere figures in the history of the country. For example, in France in the first half of the XNUMXth century in the military navy there were battleships with the names "Danton", "Voltaire", "Mirabeau", "Republic", which reminded of the Great French Revolution. And also "Henri IV", "Charlemagne" ("Charlemagne"), "Saint-Louis" and "Richelieu".

Russia followed this path in Soviet times. In the 1920s – 1930s, many civil war heroes were still alive, even though the whole country went through a terrible catastrophe. By the 1960s, the romanticization of that era began. The first Bolsheviks lost their severity and harshness and turned into people who went through fire and water. At the same time, the poeticization of the White Guards was also observed. By the 1980s, there were no more "whites" and "reds" in Soviet society. Everyone knew something about the Civil War. but only from the school or university history course, and in detail - only specialists. The Romanovs and the Civil War were practically forgotten. Just as in the 2000s, the Great Patriotic War did not cause any sacred awe among the youth. And the eternal flame has become for the youth just one of the places to hang out.

During "perestroika" almost nobody remembered Nicholas II, Denikin, Kolchak or Wrangel. The people had enough other, more important problems. And somehow, quietly, neo-White Guards and monarchists began to appear again. True (as in France, where there are supporters of Napoleon, the House of Orleans, or the Bourbons), such oppositionists in new Russia receive only no more than 1-3% of voters' support.

On the other hand, in the 1990s and especially in the 2000s, when there were almost no strong front-line soldiers left, supporters of the ataman Krasnov and Vlasov suddenly began to appear in the Russian Federation. (As in Ukraine - supporters of Shukhevych and Bandera, and in the Baltic states - local SS men). Even monuments and memorial signs began to appear in honor of Denikin, Kolchak, Wrangel and Mannerheim (Hitler's ally), etc. In the Orenburg region, for example, a monument was erected (to the winner of Chapaev) to Colonel Sladkov.

As a result, there is now again an attempt to ideologically split Russian society again into “whites” and “reds”. True, as mentioned above, few support the "white" ideology today. Still, the bulk of the population of Russia is the descendants of the workers 'and peasants' majority. But there is a split, and it is specially cultivated and cherished. And what's interesting is that modern Russian nationalists and monarchists again fall into the trap of a century ago.

Who made the revolution, destroyed the Russian autocracy, the empire and the army? Destroyed "old Russia"? Created and supported by the myth that the alleged Bolsheviks. Lenin with the money of the Second Reich. In reality, the Russian Empire collapsed under the weight of many problems that began to accumulate since the time of the first Romanovs and the church schism that broke the Russian people to pieces. Strong kings (like Alexander III) held back the decay as best they could. Nicholas II was unable to keep the situation in the conditions of a systemic crisis (to carry out radical reforms, which were eventually carried out by the Bolsheviks). The Russian elite understood the need for radical transformations. But the Russian elite, who spoke French, German and English better than their native language, since the time of Peter the Great looked obsequiously at Europe. These were predominantly Westernizers in a cultural sense.

This is how the "white" project was born (February). The entire elite of Russia opposed Nicholas II: the grand dukes and aristocrats, church hierarchs, the highest generals and officials, State Duma deputies, leaders of political parties and public associations, bankers and industrialists. They wanted a complete Westernization of Russia in the image of England or France. They killed “old Russia”. The Civil War began immediately. Long before October. In their attempt to create a "new Russia", following the example of "sweet and enlightened" Europe, the Februaryists opened Pandora's box. The autocracy, the army, the bureaucracy and the police kept the chaos in check. And the Februaryists (not without the support of England, France and the USA) destroyed the old braces, but could not offer new ones in return. European methods did not work in Russia as they did in the West. Westerners do not realize that Russia-Russia is a different, special civilization, and that it has its own path.

There was a state and civilizational catastrophe. The Russian Troubles began. All the terrible contradictions that had accumulated in the Russian Empire burst out. The "deep people" rose up against the European gentlemen. Within a month after the abdication of the tsar, the Baltic sailors killed more officers than they died during the entire world war.

Kronstadt, the main base of the Baltic Fleet, essentially became an independent republic, ruled by anarchists. After the February Revolution, a dual power emerged - the Provisional Government and the Petrograd Soviet.

At the same time, the Petrosovet was not initially created by the Bolsheviks or the masses. Both of these bodies were created by the Februaryist revolutionaries, moderate and radical groups. The Bolsheviks at that time were the weakest parties in Russia, inferior in number, as well as in organizational and material capabilities, literally in everything - the Cadets, Octobrists, Mensheviks, Socialist-Revolutionaries, anarchists and nationalists.

Thus, the nationalists on the outskirts of the empire became the new center of power. Already under the Provisional Government, the "parade of sovereignties" began. Finland, Ukraine, Cossack regions received autonomy. By order of Kerensky, the Czechoslovak, Polish and Ukrainian corps were formed. Muslim corps and regiments are also being created. By the time the Bolsheviks took power, nationalists and separatists had already put 1,5-2 million fighters under arms. And they will actively fight.

The peasants began their war in February – March 1917. The Great Peasant War began, which claimed millions of lives (hostilities, hunger, cold, disease). Simultaneously (with the collapse of the old system of law and order and the police), a criminal revolution began. During the Time of Troubles, bandits created entire armies.

The collapse of Russia was beneficial to the West - England, France and the United States. They implemented their strategic plans in relation to Russia and thoroughly plundered our country during the Time of Troubles.

For example, England at the beginning of the First World War planned to dismember the Russian Empire, to create a "cordon sanitaire" from the western Russian regions (from the limitrophe countries from the Baltic to the Black Sea). The British also succeeded during the Russian Troubles. Finland, the Baltic States and Poland were separated from Russia (to which they gave up Western Belarus and Western Ukraine). From the Russian north, the British exported furs, timber and minerals, from the Caucasus - oil. Plus value, gold.

That is why the West did its best to foment the Civil War in Russia. The Entente supported the White movement and nationalists of all stripes, including the Basmachis (the forerunners of modern jihadists) in Central Asia. At the same time, the West periodically interfered with the White Army so that it would not win the war. The existence of a "united and indivisible Russia" was not in the interests of either England or the United States.

The factory owners, landowners, bankers and politicians themselves sat in Berlin, Paris or Constantinople. Others waited for the outcome of the war in Kiev, Odessa or Sevastopol. Hence the severe shortage of manpower in the White Army. The Red Army had in 1919 - 3 million bayonets and sabers, in 1920 - more than 5 million. Nationalists and interventionists at the same time fielded 2-3 million people. And in all the white armies at the same time there were never more than 300 thousand people.

There was no truth for White. Hence the active resistance (red partisans, peasant rebels) or the indifference of the masses to them. And the complete victory of the Bolsheviks, who began in words to exploit the basic elements of the Russian civilization matrix - social justice, getting rid of social parasites, solidarity (conciliarity) and brotherhood, the ethics of honest labor.

Thus, the victory of the new Februaryist revolutionaries in 1991-1993. was not a restoration of "old Russia". It was again the victory of the Westernizers, who tried to make Russia a part of the West (Europe). The output would be a raw material, cultural appendage, in which our people would not have any future there. With the domination of the financial and comprador oligarchy, with the media of the pro-Western liberal intelligentsia, which denies both the "damned scoop" and "colonial tsarism" ...

And now the neo-Westerners are again cutting off the Russian people from both the Russian tradition in general (both “white” (pre-Soviet) and “red” (Soviet)). Russian nationalists and monarchists are being sharpened again to protect the interests of big business.

The current split of Russians into new “whites” and “reds” is again beneficial today only to our western and eastern “partners” (who dream of dismembering and robbing Russia again). Moreover, perhaps, it plays into the hands of financial capital, which grows fat on the robbery of the people's wealth. And, of course, this is water for the new nationalist separatists who will be ready to tear the Russian Federation apart, just like 100 years ago.