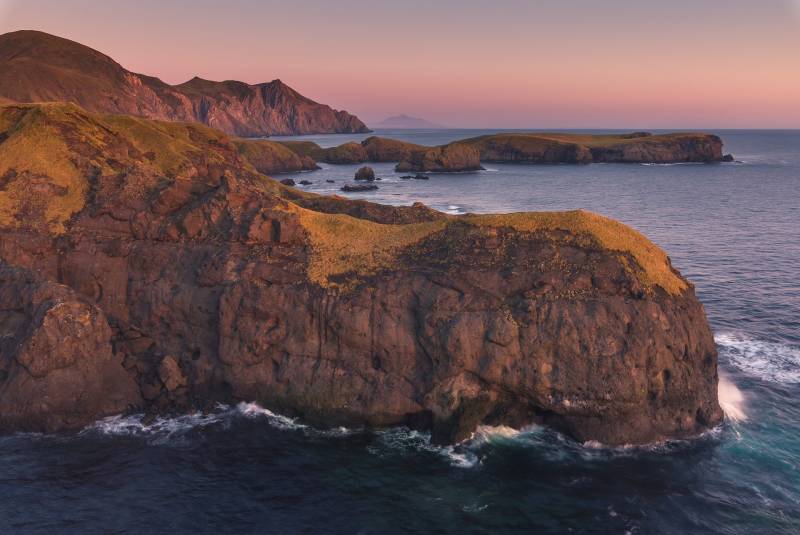 History The Japanese newspaper Hokkaido Shimbun dug up the outrageous line of behavior of American diplomats just the other day. On December 6, journalists found out that since 2018, when issuing green cards for residence in the United States, Americans consider the South Kuril Islands a part of Japan. And this does not last far from two years - according to officials in Washington, the United States has recognized Japanese sovereignty over the islands of Habomai, Shikotan, Kunashir and Iturup since 1956.
Russians born on the southern Kuril Islands, which are considered by Japan to be "temporarily occupied northern territories", will face unpleasant surprises when applying for a long-term residence permit in the United States. First, American diplomats will consider them native Japanese, despite their Russian passports. This is a rather strict requirement - in the application for the notorious green card, you will have to write "Japanese", otherwise the documents will not be accepted. But this is not so bad. Secondly, in accordance with generally accepted taxation rules, such "Russian Japanese" must pay taxes to the Tokyo budget. How much finance can be collected from a Russian citizen in favor of the Japanese economy is not separately regulated. In this case, American diplomats clearly limited the scope of Russian jurisdiction - the natives of South Sakhalin were generously “allowed” to pay taxes to the treasury of the Russian Federation. 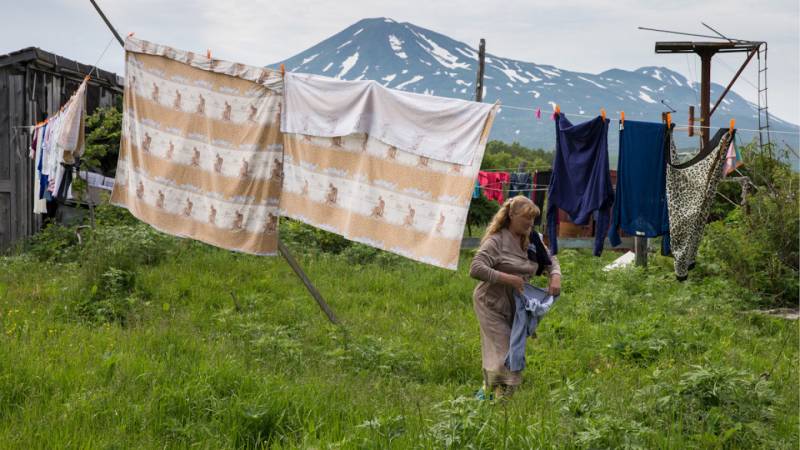 Source: themoscowtimes.com
In 2018, about 22 thousand Japanese people took part in the drawing of a green card for long-term residence in the United States. At the same time, over the same year, Russia received an order of magnitude more similar requests - 290 thousand. How many of them were filed by the natives of the South Kuriles in such a dual status, history is silent.

Since the Cold War, the “Kuril problem” has been expertly used by the United States to drive a wedge between the USSR and Japan. The goal was to prevent their possible rapprochement and to keep occupied Japan forever in the orbit of its influence. Subsequently, one more goal was added to these goals: with a successful coincidence of circumstances, establish its military control over the South Kuriles through allied Japan and expand its capabilities to control the strategically important Sea of ​​Okhotsk. That is, the main beneficiary from the hypothetical transition of Habomai, Shikotan, Kunashir and Iturup back under the jurisdiction of Tokyo will not be the Japanese at all, but the military-political leadership of the United States. The outrageous story of the American green cards appears to be the next step for the long-term escalation of tensions between countries.
Let us recall the events of almost seventy years ago. On September 8, 1951, a peace treaty developed by the United States and Great Britain was signed in San Francisco between Japan and the allies. At first glance, the treaty was prepared in full accordance with the Yalta Agreements, according to which South Sakhalin and the Kuril Islands were transferred to the Soviet Union. In San Francisco, Tokyo officially and quite peacefully renounced all rights and claims to South Sakhalin and the Kuriles. Moreover, Japan even lost the right to raise such a territorial issue in the future. But this agreement was drawn up in a very ambiguous way, and it did not indicate to whom exactly the Kuril Islands should go. A dangerous precedent was created that could be perceived ambiguously by different powers. The islands that passed to the USSR were not named in the treaty, which was one of the reasons why the USSR, represented by A.A. Gromyko, did not sign the San Francisco Treaty.
The United States regarded such a demarche by Moscow in a very peculiar way and decided unilaterally that they would not recognize any territorial claims of the USSR to Japan. That is, they made the existence of Soviet sovereignty over South Sakhalin and the Kuriles illegal. Outside of their American law ...

Ending a state of war

The Moscow Declaration of December 19, 1956 became a kind of substitute for the San Francisco Treaty. Under its terms, the state of war between Moscow and Tokyo ended, and diplomatic relations were restored. In turn, the USSR renounced all reparations and claims against Japan, pledged to release and repatriate all of its convicted citizens to their homeland. The signing of the declaration opened the way for Japan to join the UN, since the USSR pledged to support her request to join this organization. Article 9 of the document states that after the establishment of diplomatic relations, the parties will continue negotiations to conclude a peace treaty; and the USSR, as a gesture of goodwill, agrees to transfer, after the conclusion of a peace treaty, the Habomai Ridge and Shikotan Island. We should especially note - it was only two islands. As a result, it is clear that the Moscow Declaration was more a concession for the Japanese than a mutually beneficial agreement. The declaration unambiguously made it clear how important the relationship with the rising Japan was to Moscow. But in Tokyo they did not want or could not draw the correct conclusions from this. Largely because of the position of the United States. The United States has adopted a very aggressive stance on the development of relations between Japan and the USSR. According to Washington, the declaration could bring the power closer to each other as much as distance Japan from the United States. Therefore, precisely since 1956, in American diplomatic circles, the issue of the South Kuriles was unambiguously considered in favor of Tokyo, which irritated Moscow and flattered the Japanese. 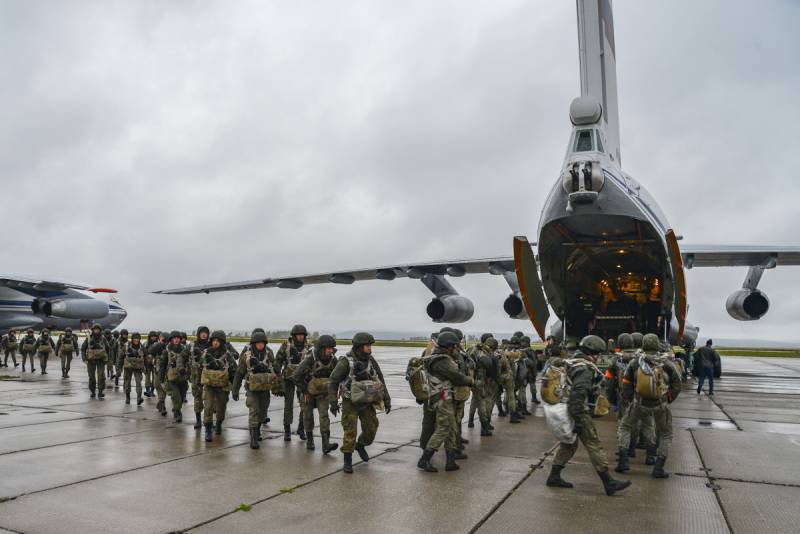 Russia's military activity in the legal territory of the South Kuriles invariably arouses protests and concerns of official Tokyo. Source: Russian Ministry of Defense, mil.ru
Japan's further actions can no longer be regarded as friendly. In 1960, the Americans effectively turned the island state into their largest aircraft carrier, stuffing the country with military bases. The USSR replied to Tokyo with a so-called "memorandum", in which they indicated that in such conditions there could be no talk of concluding a peace treaty and, according to, the transfer of the islands.
Since that time, the situation has not fundamentally changed, except for the notorious "Tokyo Declaration on Russian-Japanese Relations" of October 13, 1993. This document cannot be viewed as anything other than the flirting of the young Russian leadership with the Japanese government. The declaration not only outlined the path to signing a peace treaty, but also added the islands of Iturup and Kunashir to the potentially returned islands. It is surprising how similar agreements have not yet been signed with the FRG regarding the return of the Kaliningrad region back to the Germans.

The West is slowly but surely moving towards revising many of the outcomes of the Second World War. First, we see an excuse or simply tacit approval of Ukrainian collaborators from the ranks of the SS, which directly contradicts the results of the Nuremberg trials. Later we hear accusations against the USSR of collusion with Hitler's Germany and joint incitement to war. And now the United States, with a seemingly imperceptible decision on the status of the natives of the South Kuriles, is trying to destroy the agreements that are more than a decade old. At one time, it was the decisions of the Yalta Conference that created the modern world in which we have been living for 75 years without world wars. 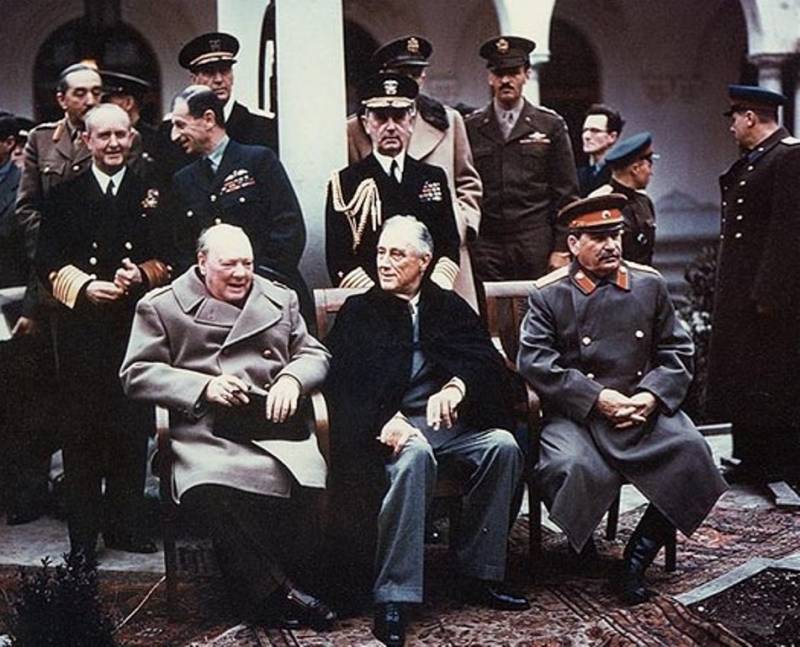 The results of the 1945 Yalta Conference laid the foundation for the modern world order in many ways. And the status of the Southern Kuriles is no exception. Source: ru.wikipedia.org
In this regard, the words of the Russian Foreign Ministry are very timely:
“Need more proof that the US is a revisionist power? By decision of 1945, the Kuril Islands were ceded to the USSR. Today, the State Department questions the results of the Second World War and encourages revanchism. Know your boundaries and red lines. "

Come back, I will forgive everything!

Japan, although it is the closest ally of the United States in the Pacific region, is gradually becoming more independent from the dictates of Washington. This is demanded by Russia and China, with whom the American relations have long been not in the best shape. Also, the close proximity to proud and warlike North Korea makes Tokyo look for its own path of development, different from the general line of the United States. Not everyone wants to be a target for a potential nuclear strike - Japan will definitely become such in case of war due to the abundance of Pentagon bases on the territory.
It is in the mainstream of this story that Tokyo's recent refusal to deploy American missile defense systems Aegis Ashore should be viewed. The official reason was to save money, but in reality the Japanese simply do not want to tease their formidable neighbors - Russia and China once again. Such a centrifugal process could not but be noticed in Washington, and the scam with the Kuril "Russian Japanese" became one of the attempts to soften Tokyo's position. However, such rash steps aimed at revising the basic agreements because of the immediate benefit may please third countries. And the "Kuril precedent" will become a completely official reason for the redistribution of the borders established in Yalta in 1945. The tougher and more consistent the position of Russia and, I would like to believe, the UN, the less there will be an attempt on historical justice. Whatever it is for some uncomfortable and shameful.

Ctrl Enter
Noticed oshЫbku Highlight text and press. Ctrl + Enter
We are
Kuriles - an integral part of our homeland"Southern Kuriles" or "Northern Territories"? To be continued
Military Reviewin Yandex News
Military Reviewin Google News
83 comments
Information
Dear reader, to leave comments on the publication, you must sign in.