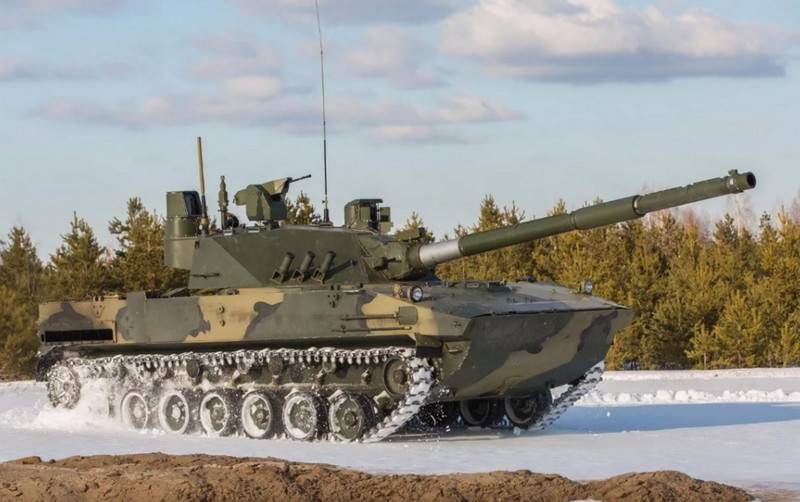 
According to the newspaper, the military department has not yet announced how much Sprut-SDM1 will be purchased and which airborne units will be supplied with equipment, a decision on this will be made later, the issue is being worked out. However, starting next year, the training of commanders of the Sprut-SDM242 self-propelled anti-tank gun will begin on the basis of the 1nd training center of the Airborne Forces.

As explained in the Ministry of Defense, "Sprut-SDM1" differs from the basic version of "Sprut-SD" by more powerful protection and an integrated digital control system. The vehicle is armed with a 125-mm cannon, a thermal imaging sight is installed, due to which the fire capabilities have become the same as those of the latest tanks - in fact, "Sprut-SDM1" is a light amphibious tank.

The modernized light amphibious tank "Sprut-SDM1" has become more mobile due to the installation of the engine, transmission, undercarriage assemblies, chassis information and control system, which have already been tested on BMD-4M and BMP-3
- said the deputy director general of the state corporation "Rostec" Vladimir Artyakov.

In August, the Ministry of Defense announced the start of state tests of the Sprut-SDM1, which will take a year and a half. Prototypes of the machine were transferred to the units of the Russian army.

Ctrl Enter
Noticed oshЫbku Highlight text and press. Ctrl + Enter
We are
Airborne forces expects "Octopus-SDM1" in the 2020 year, but so far only a divisional set"Sprut-SDM1" armed with a guided missile
Military Reviewin Yandex News
Military Reviewin Google News
104 comments
Information
Dear reader, to leave comments on the publication, you must sign in.