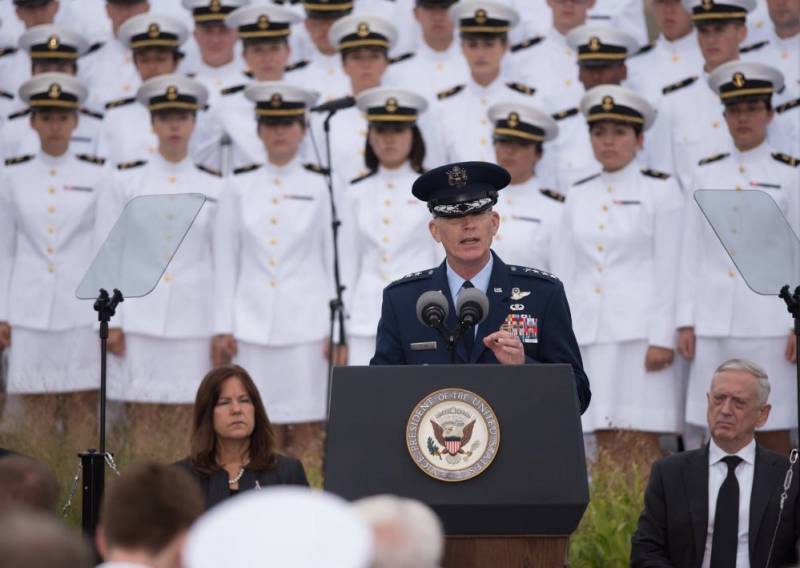 General James Mattis celebrated his 70th birthday this year. He commanded the famed US Central Command from 2010-2013 and served as Secretary of Defense of the United States of America from 2017 to 2019.

Behind the eyes, and in the American press too, Mattis, when he was a general in the Marine Corps, was nicknamed "Mad Dog". Such a nickname was given to the military leader for his mercilessness towards enemies and incontinence in words: Mattis made rather harsh statements more than once. For example, the general said that he was "damn fun to shoot some people."

Mattis also has a second nickname - "Monk": he was given to the general because by such an old age he did not have offspring and did not even have a family. One could already suspect the general of belonging to the followers of one fashionable trend in the West, if not for his next statement:

I would go to a monastery if there were beer and girls.
By the way, Mattis is far from the only former high-ranking American military man with strange nicknames. For example, in stories the US armed forces had two "Grannies". Yes, this is not a mistake: it was "Granny" that was the name of the famous General of the Civil War in the United States, Robert Lee, as well as General Elwell Stephen Otis, famous for his participation in the wars with Spain and the Philippines. However, Robert Lee was also called "The Marble Man" for his excellent studies at West Point.

If Mattis was called "rabid dog", then another of his contemporary - General John Abizaid, by the way, the only such high-ranking American military of Arab origin (Abizaid is from Jordan), received the nickname "Rabid Arab". Abizaid, who turned 69 this year, in 2003-2007. headed the US Central Command. This is a combat general, behind whose shoulders participation in operations in Grenada, Iraq and Yugoslavia.

For four years, from 2015 to 2019, the Committee of the Chiefs of Staff of the US Armed Forces was headed by "Aggressive Joe" - as General Joseph Dunford was called in the American army. A Marine and a hereditary military man, Dunford earned this nickname for his fighting style during the 2003 Iraq War.

But, you must admit, you can be a "Furious Arab", and even more so, "Aggressive Joe", and even a "Mad Dog", and "Old Wooden Head" is already insulting. But that was the name of the General of the Civil War in the United States, John Bell Hood, who was considered one of the most courageous military leaders of the Confederation of the southern states and, by the way, was not at all an old man - at 48 he had already died, and received the nickname much earlier.

From Malay Tiger to Otter and Peach

Italian corps general Annibale Bergonzoli, who commanded the XXIII corps during World War II, was also unlucky with the nickname - he was called "Electric mustache". More fortunate was another high-ranking Italian - divisional general Achilla Starace, a blackshirt and close associate of Benito Mussolini: he was called the "Panther Man". Yes, and this is not an otter at all, as the British General Wingate Horde was nicknamed, famous for the creation of irregular special forces in the Middle East, Burma and Ethiopia.

The Japanese general Tomoyuki Yamashita had a more impressive nickname. Co-workers respectfully called him the "Malay Tiger", since it was Yamashita who commanded the Japanese troops in the capture of Malacca, and then received the post of military governor of the Philippines.

The modern American military leader David Petraeus, who in 2011-2012. headed the US Central Intelligence Agency (CIA), and before that commanded US troops in Afghanistan and was the commander of the US Central Command, nicknamed "Peach". Mark Esper, who briefly served as US Secretary of Defense under President Donald Trump, was contemptuously nicknamed "Mr. Yes" because Esper tried not to contradict the president and always agreed with his opinion. Perhaps it was this lack of initiative and personal opinion that caused Esper's short tenure in office.

As you can see, mostly nicknames of high-ranking military personnel in foreign armies are associated either with the peculiarities of their personality, or with some important events in which they happened to participate. The nicknames themselves also differ - from respectful to dismissive. Moreover, they can not always reflect the real combat successes of the generals. How can we not remember our Russian "Pasha-Mercedes", which at one time, by the way, fought bravely in Afghanistan and was actually a brave paratrooper.