Sale of a courtyard girl in the painting by artist Nikolai Nevrev “Bargaining. A scene from a serf life. From the Recent Past "(1866, Moscow, Tretyakov Gallery)

So, we have to wrap by the way
The other side is a medal.
Suppose the peasant child is free
Grows without learning anything
But he will grow up, if God pleases,
And nothing prevents him from bending.
(Nikolay Nekrasov. "Peasant Children")
The beginning and end of the peasant civilization. So, for millennia, all progress, the entire culture of human civilization has been based on peasant labor. 80% of the world's population lived in the countryside, and only 20% - and this is the maximum, but actually less - lived in cities. And the bulk of these peasants in European countries were in serfdom depending on the feudal lords, while free people lived in cities. "The air of the city makes free" - this is a popular saying of the medieval era. It was enough to live in the city for one year and one day, and your master could no longer claim you as his property. But then an unexpected and pernicious climate change happened, a need arose, and ... for the sake of it, in one of the European countries, the issue of land ownership was very radically resolved. In fact, then in England - the country that was discussed in our last material of this cycle, the peasantry was destroyed as a class. But a class of workers and industry appeared, and the country pulled ahead in comparison with all other European states ... 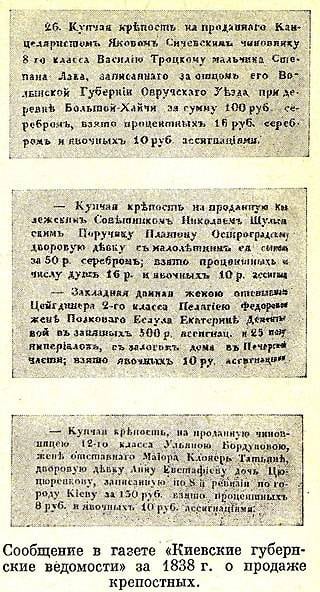 Kiev. "Vedomosti" 1838 Announcement of the sale of serfs
However, you can't dine on machines, so the British had to import food from abroad, which made their country somewhat vulnerable in the event of war. Napoleon also tried to take advantage of this vulnerability, wishing to deprive her of Russian bread, which, as we know, led to the war of 1812, which became ... the beginning of its end. Since then, no one has encroached on the intercontinental trade of Britain until Hitler, who, however, did not succeed either, although the British had to limit consumption and plow Hyde Park for potatoes. But this happened later. In the meantime, we will consider the situation of the peasants in those countries where, according to the figurative expression of Friedrich Engels, after the British reforms in the field of peasant land tenure, there was a "second edition of serfdom." 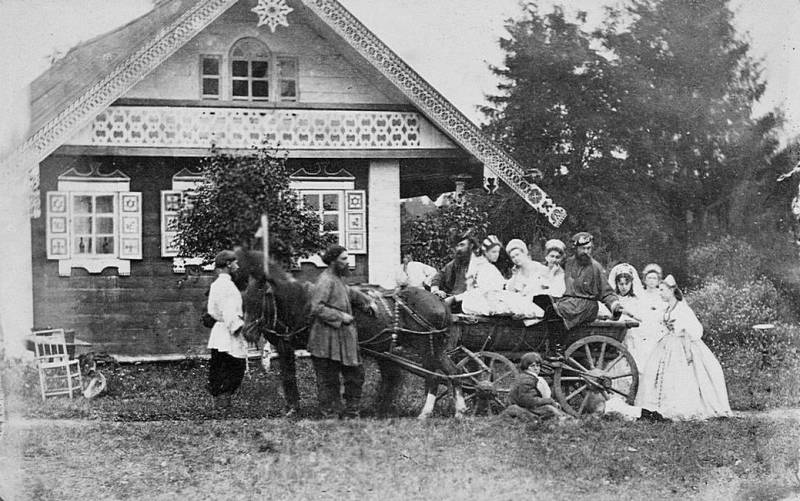 A smart country house, a smart country wedding ...
But the "second edition of serfdom" happened in countries such as the Commonwealth, Hungary, Russia, Czech Republic, Denmark, and in most of the states of eastern Germany: Prussia, McLenburg, Pomerania and Austria. In all these countries, market relations and private property already existed, which distinguishes their "right" from the classical serfdom of the early feudal era. The new serfdom differed from the previous one in that the former corvée agriculture was no longer natural, but commodity, and was included in the market. Another peculiarity was that the peasants were the private property of landowners: the trade in souls (and often without land) was widespread in Pomerania, Russia, McLenburg and the Commonwealth. That is, we are already dealing in fact with the most real slavery, which distinguishes this form of exploitation of the peasants from their exploitation in England and France.

Marxist historical science explains what happened by an increase in the demand for bread in England, and then in France, which also over time put its economy on a capitalist track, and the strengthening of the power of state power, which has learned to cope even with such actions of the lower classes as Razinshchina and Pugachevshchina. Another point of view: the development of civilization proceeded in the direction from west to east and therefore - again due to the influence of the natural geographic factor - was delayed. But the supporters of the "theory of dependent development" explain this by the fact that in the process of introducing capitalist relations into traditional society, modernization occurs in it only partially (say, enclaves of modern military production at that time appear), but only due to the massive archaization of social relations due to their limits, including the return to serfdom of the peasants or even its tightening in those places where it was in the process of its decay. Indeed, if we look over the years, we will see that serfdom in the countries of Eastern Europe was abolished in waves, and the more “continental”, let's say, the country was, the ... later serfdom was liquidated in it: in the Czech Republic it was abolished in 1781 year, in Prussia - in 1807, in Mecklenburg - in 1820, in Hanover - in 1831, in Saxony - in 1832, in the Austrian Empire - in 1858, but in Hungary only in 1853, in Russia - this is 1861, although in In the Baltic provinces of Estland, Courland, Livonia and on the island of Ezel, it was canceled in 1816-1819, in Bulgaria (which was part of the Ottoman Empire) in 1879, but in Bosnia and Herzegovina only in 1918! 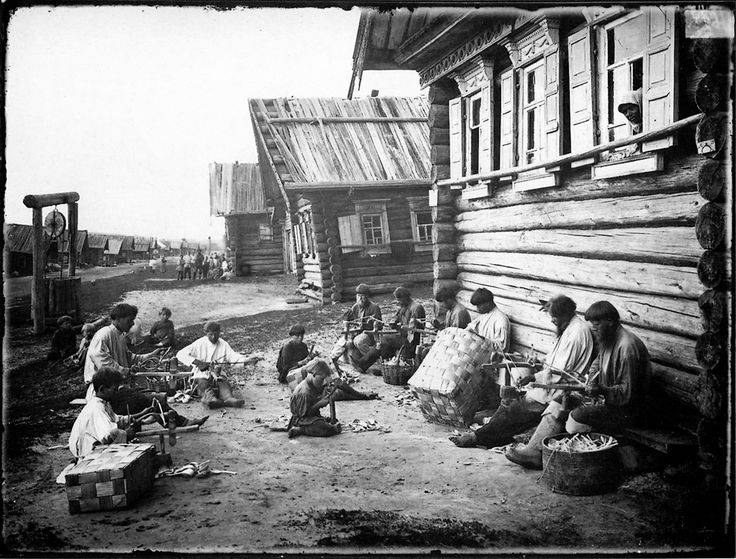 Peasant everyday life: weaving birch bark tues
And this is what is significant: all these states basically developed as ... agrarian appendages of the same England, in which the peasants constituted an insignificant part of the population. Of course, they had their own industry, but the machines for it were again ordered in England, as well as many other things. But there ... What was sent from Russia "there"? Before us is the "Journal of General Useful Information, or the Library of Agriculture, Industry, Agriculture, Sciences, Arts, Crafts and All Kinds of Useful Knowledge" for 1847. And from it we learn that in 1846 from the port of St. Petersburg exported abroad: bacon - 2 pounds, horse manes and tails (then they stuffed furniture with horsehair!) - 922 pieces, and wheat - 417 pounds. It turns out that lard was exported more than wheat, although this does not mean anything, because the export went through many other ports, so its volumes in it were very significant!

215 barrels of cranberries and such an "amazing thing" as ... 485 poods of the blister fly, which was then very popular, sailed there. By the way, in the same magazine, advice was given on how and with what to feed your courtyard, so that it was both well fed and healthy. And it says that for one serf living in a noble house, rye flour needs 1 pood (16 kg) per month, various cereals 1,5 poods, onions 1 pood per year. Meat was proposed to be given at a quarter of a pound (pound 400 g) on ​​soon days, which would have totaled 48 pounds a year. 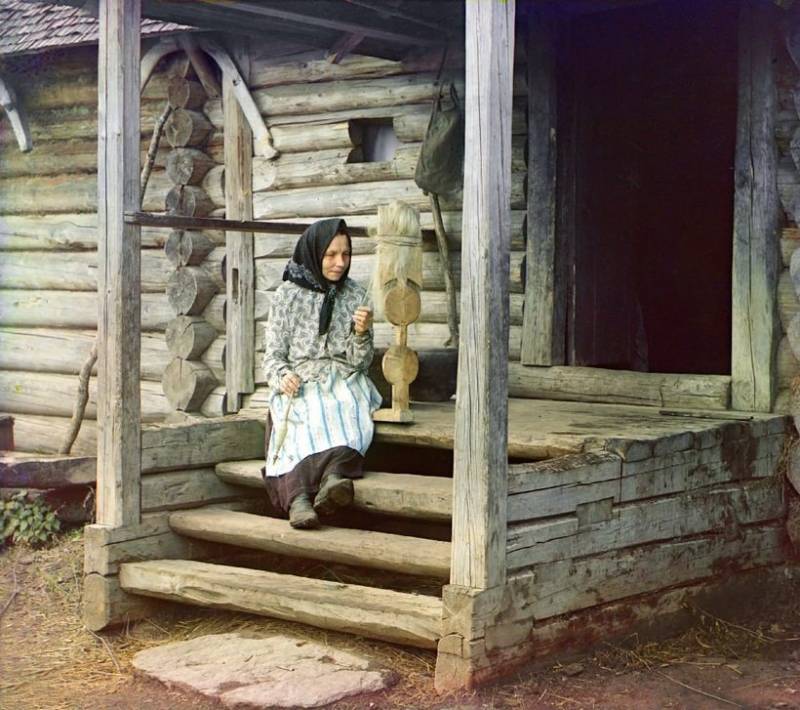 Rare color photographs of life in the Russian Empire. It turns out that there were some!
True, for some reason, this list of products contains absolutely no fish, and mushrooms and berries are not mentioned either. And this was most likely not due to the greed of the landowners. It just never entered anyone's head to write about this - in their farms all these types of food raw materials were not considered food then! 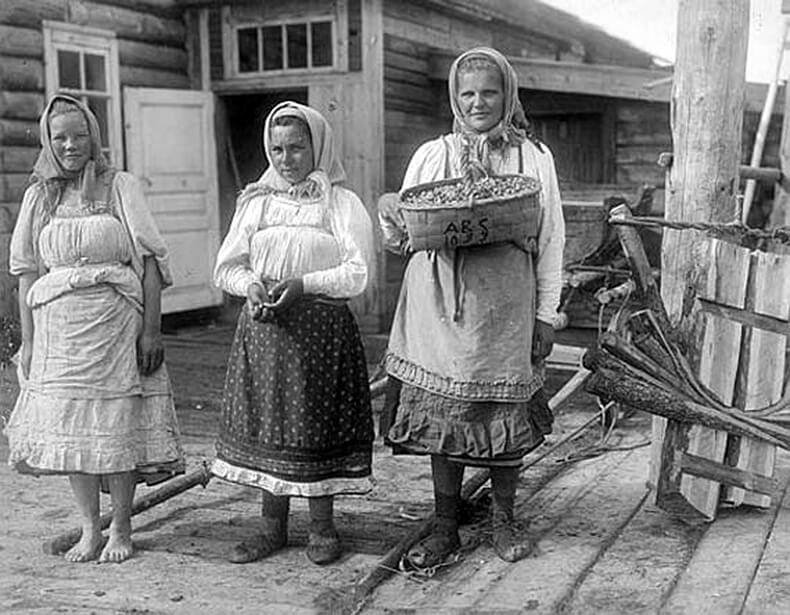 We returned from the forest with a basket of nuts ...
This is the economy, but how did serfdom affect such a "shaky thing" as morality? Yes, in the most pernicious and corrupting way, and the entire population of the empire without exception - both landowners and the serfs themselves. Here, for example, that in his letter, written in April-May 1826, A.S. Pushkin wrote from his Mikhailovsky to Moscow to his friend Vyazemsky:

This letter will be handed to you by a very sweet and kind girl whom one of your friends inadvertently knocked over. I rely on your philanthropy and friendship. Take her in Moscow and give her money as much as she needs, and then send her to Boldino; posterity does not need to know about our philanthropic deeds. With this, with fatherly tenderness, I ask you to take care of the future baby, if it is a boy. I don’t want to send him to the Orphanage, but can I still send him to some village - even to Ostafyevo (Volume 9, Letter No. 192).

This girl was the serf of Pushkin, Olga Kalashnikova, who, at least in that, was lucky that she later married successfully. 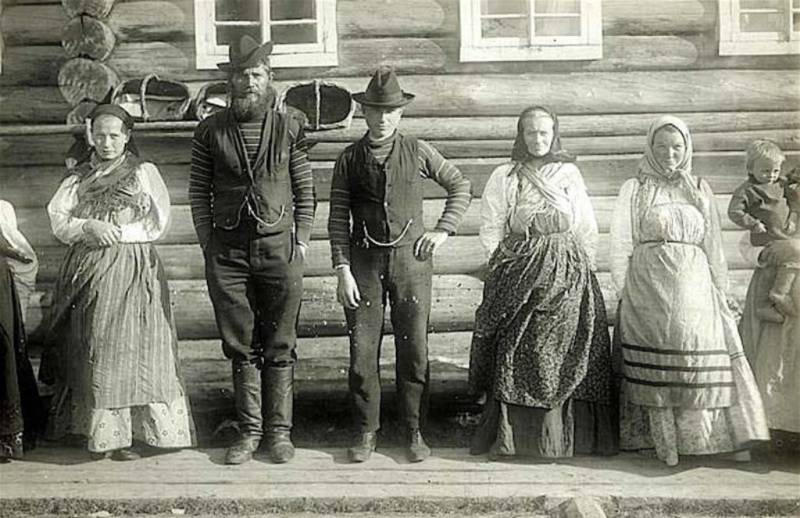 Russian peasants? Yes, Russian peasants ...
Well, the great philanthropist Leo Tolstoy also did not shy away from intimate relations with his serfs. For example, with the peasant woman Aksinya from Yasnaya Polyana, who in 1860 gave birth to his son Timofey. Then there was the maid Gasha, then the cook Domna ... but as a result of all this immoralism - the highly moral novel "Resurrection". And this is only the smallest part of the chaos that was happening not in the era of dark knightly castles, but in a country that has “cut a window to Europe” for more than 200 years, a country with railways, steamships and telegraphs! Moreover, all this immoralism, corrupting both the nobility and the peasants themselves, would be justified at least somehow economically, but no ... For example, Doctor of Historical Sciences L.M. Ryansky in his doctoral dissertation “Evolution of the social and economic life of a serf village Chernozem center at the end of the 2,5th - the first half of the XNUMXth century. " writes that although the lordly field work was carried out at the optimal time for them, the peasants, forced to cultivate areas two or three times greater than their capabilities and the capabilities of their horses, hardly worked "conscientiously", and in their own arable farming they "practiced" in fits and starts and often at the wrong time. Therefore, the harvest of rye "sam-XNUMX", for example, was the norm even with very diligent cultivation of their allotment, and there is no need to talk about the landowners' lands. 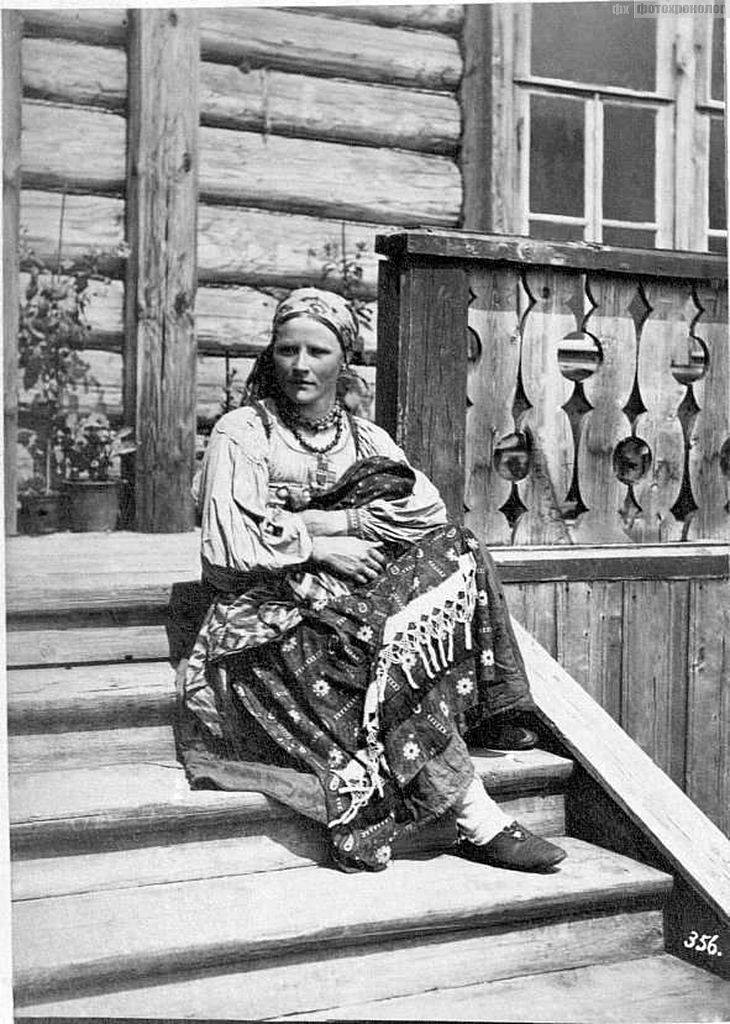 Russian peasant woman, late XNUMXth century
As a result, as a result of the development of our civilization, we see that by the middle of the XNUMXth century, scientific and technological progress had risen to great heights, but the social was trailing behind it. Moreover, in countries that have made headway in their development, the number of peasants has been continuously decreasing, while the number of industrial workers has increased! All this "horde" needed to be fed - and the consequence of the development of industry is colonial expansion in relation to very underdeveloped countries, and somewhat more developed countries, due to inequality of economic relations, are turning into agrarian and raw materials appendages of "advanced countries" (who paid for this their "advanced position "In the past, both with blood and considerable suffering of their own citizens!) And export lard, wheat and ... cranberries with" Spanish flies "there. 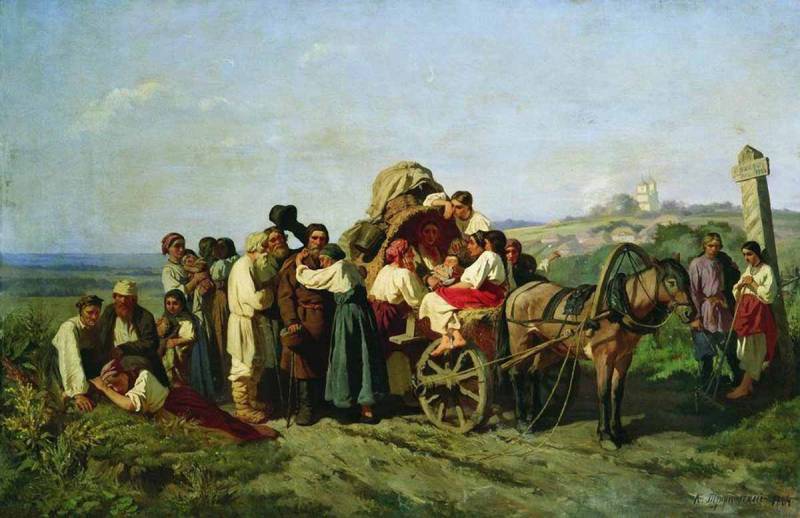 Trutovsky K.A. Migrants from Kursk province, 1864 (State Russian Museum)
And only when the gap in the economic and military spheres becomes too significant, the authorities of such a backward country go on to abolish serfdom by means of a decree from above. Moreover, the reason why they are in no hurry is understandable. After all, all the land holdings of the landowners, for example, here in Russia, long ago turned into their private property, and to encroach on it would mean robbing ourselves. Free the peasants without land? Even worse - this is a sure way to cause trouble worse than in the days of Pugachev. Buy back the land? The government simply would not have enough money for this. So it was necessary in 1861, when it was no longer possible to delay, to resolve the issue with the peasants and landowners by way of many compromises, and not, again, as it was in Tudor England, where the interests of the peasants driven from the land were taken into account to the least extent. It should be noted that the reform itself was disgraceful and was poorly prepared even technically - the texts of the Manifesto were not enough, and they had to be read aloud, although in theory at least one copy would have to be distributed to each village. Well, the further consequences of such a radical event in our history will be discussed in the next article.