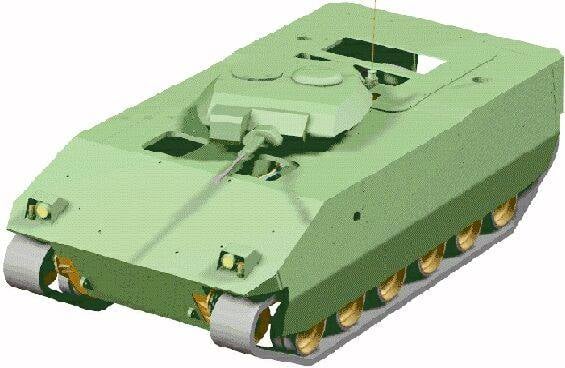 An armored combat vehicle must provide the required level of protection, but at the same time be as light as possible. In the past, this problem was solved with aluminum armor, and then more daring ideas appeared. In the British pilot project ACAVP, an armored hull with a sufficient level of protection was made of a composite material based on fiberglass and epoxy resin.

The main advantages of aluminum armor over steel are associated with its lower density. Due to this, the aluminum part with the same mass can be thicker and provide protection at least as good as steel. In addition, the thicker aluminum part is stiffer, which simplifies the design of the armored hull. All these features of different materials have been repeatedly demonstrated in different projects. 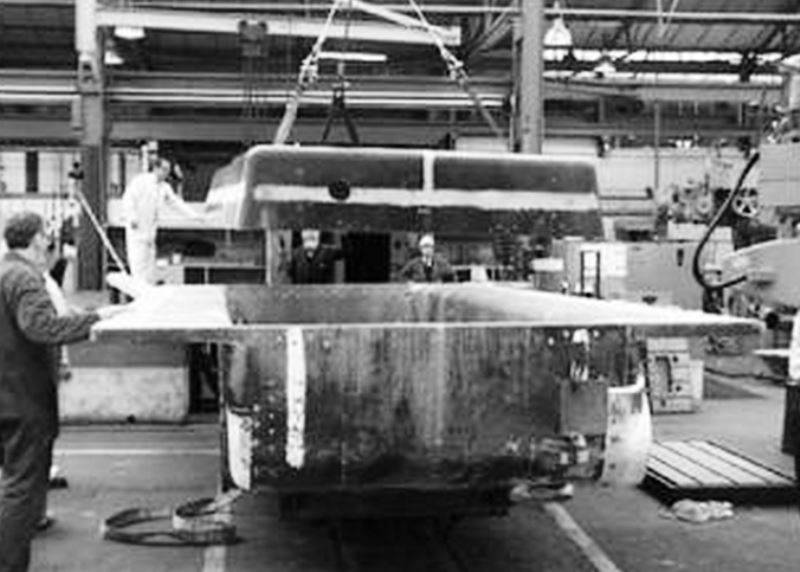 Assembling the body from two parts. Photo Thinkdefence.co.uk
In 1991, DRA launched the ACAVP project (Advanced Composite Armored Vehicle Platform - "Advanced platform with composite armor"). Several scientific organizations were involved in the research, and the enterprises of GKN, Westland Aerospace, Vickers Defenses Systems and Short Brothers were to participate in the production of experimental equipment.

Subsequently, the composition of the program participants changed. So, in the mid-nineties the company "Short" left it, which did not have the necessary production capacity. Instead, Vosper Thorneycroft joined the work. In 2001, DRA / DERA was disbanded, and QinetiQ became the main participant of the program.

At the first stage of the project, in 1991-93, the task was to find the optimal composite that could replace aluminum armor. It was planned to study existing and promising materials and find the most technically successful - and economically advantageous. When determining the required characteristics of composite armor, they were repelled by the protection of the serial aluminum Warrior BMP. 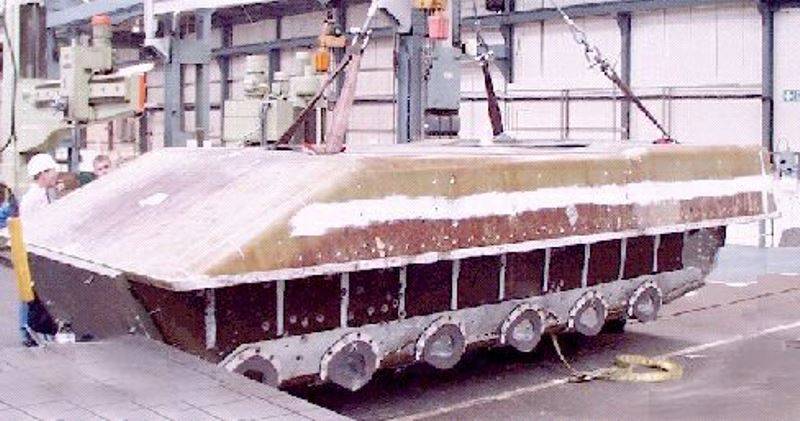 Finished case with metal inserts. Photo Thinkdefence.co.uk
The general architecture of the new armor was determined quickly enough. It was proposed to perform it on a matrix of epoxy resin filled with sheet material. This required testing and comparing different resins and materials. At this stage, cost became an important factor. Thus, standard grades of fiberglass with limited strength characteristics cost only 3 pounds per kilogram. Stronger aramid fiber (Kevlar) cost 20 pounds per kg. A wide variety of epoxy resins were available, and the cost varied widely.

The final composition of the armor for the ACAVP prototype was determined in 1993. It was proposed to be glued from glass cloth from Hexcel Composites using Araldite LY556 resin from Ciba. They also needed molds and other tooling for production - Short Brothers were responsible for them.

The parts were to be manufactured using vacuum forming technology. Sheets of fiberglass were placed in a special heat-resistant bag, and this assembly was placed in a mold. A vacuum was created inside the bag, after which the resin was fed inside. After the sheets were impregnated with resin, the future composite part was placed in a sintering oven.

The principle of manufacturing parts. Graphics Assets.markallengroup.com
In the course of research, blocks of composite armor of different composition and differing dimensions were manufactured. The final product of this stage was the aft door for the Warrior BMP. This product was tested in 1993. Composite door with the same resistance to bullets was 25% lighter. This showed that it was possible to manufacture a whole composite body with the desired characteristics.

In 1993, development began on the ACAVP prototype with a composite body. This project was developed by the Vickers company on the basis of the Warrior BMP. For the first time in stories of the company, the project was created entirely in digital form. During the design, ready-made components and assemblies were actively used; the power plant, chassis and some other units were borrowed with minimal changes. The design was completed only in October 1996, and after that preparations for construction began.

The composite body for the ACAVP was similar in appearance to the Warrior armor, but had simpler contours that made it easier to manufacture and remove parts from forms. The body was divided into two parts. The lower "bath" was approx. 6,5 m and weighed 3 tons. Bushings and other elements for fastening the power plant, chassis, etc. were embedded in the composite. The upper box of the hull had a mass of 5,5 tons. It received an inclined frontal part and a long roof with a turret ring and hatches. The thickness of the composite armor in the most critical areas reached 60 mm 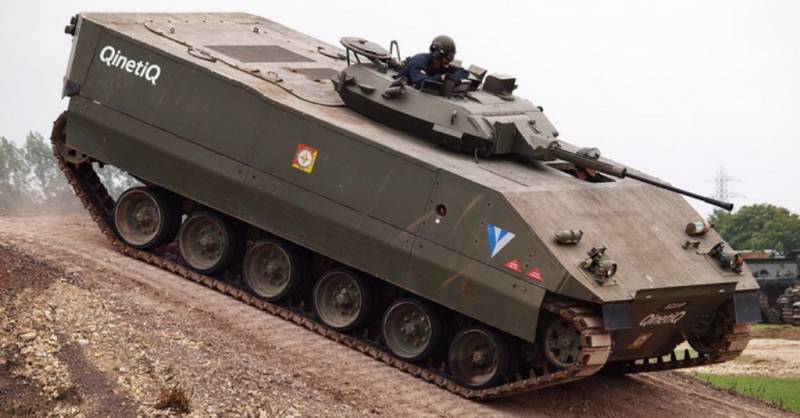 Experienced ACAVP on the track. Photo Thinkdefence.co.uk
The level of protection of such a hull corresponded to the armor of a serial BMP. It also provided for the possibility of installing hinged booking units - steel, aluminum or composite. This made it possible to enhance protection, using the freed up carrying capacity.

In the rear of the hull, a power unit was installed from an infantry fighting vehicle based on a Perkins V-8 Condor diesel engine with a capacity of 550 hp. The composite could withstand temperatures up to 130 ° C, which made it possible not to worry about the destruction of the engine compartment. A six-roller undercarriage with a torsion bar suspension and a rear drive wheel was used.

The experienced ACAVP was equipped with a Warrior turret. The crew was reduced to two people - the driver and the commander. They were located in the hull and fighting compartment and fell into place through their own hatches. There was no troop compartment.

Depending on the equipment and other factors, the total mass of the ACAVP was in the range of 18-25 tons. The driving performance remained at the level of the existing BMP. With the same level of protection, the composite body was 25% lighter than the aluminum one, and the mass savings reached 1,5-2 tons. When using other armor components, the weight difference could be increased to 30%. However, the new case was not cheap, and the high price could offset other advantages. 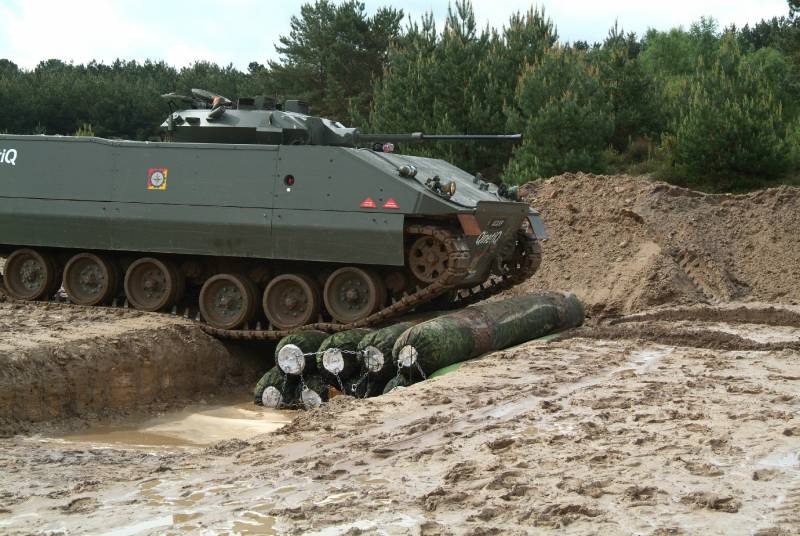 Composite at the landfill

Preparations for the construction of an ACAVP prototype armored vehicle began at the end of 1996. At this stage, it became clear that Short Brothers was not able to manufacture two large-sized hull elements due to the lack of furnaces of the required dimensions. The order for the production of armor was transferred to Vosper Thorneycroft.

By the end of 1997, the prototype was completed and taken out for testing. The tests confirmed the high strength and rigidity of the hull, which allows the armored vehicle to move over rough terrain without the risk of deformations, damage, etc. A full-fledged car was not tested by shelling, but individual composite panels made using the same technology passed this test.

Tests of the ACAVP prototype were completed in 2000-2001. with positive results. In practice, all the calculations of the developers were confirmed, and the designers have at their disposal a set of promising technologies suitable for use in new projects. The future of these developments depended only on the plans and wishes of the military department. 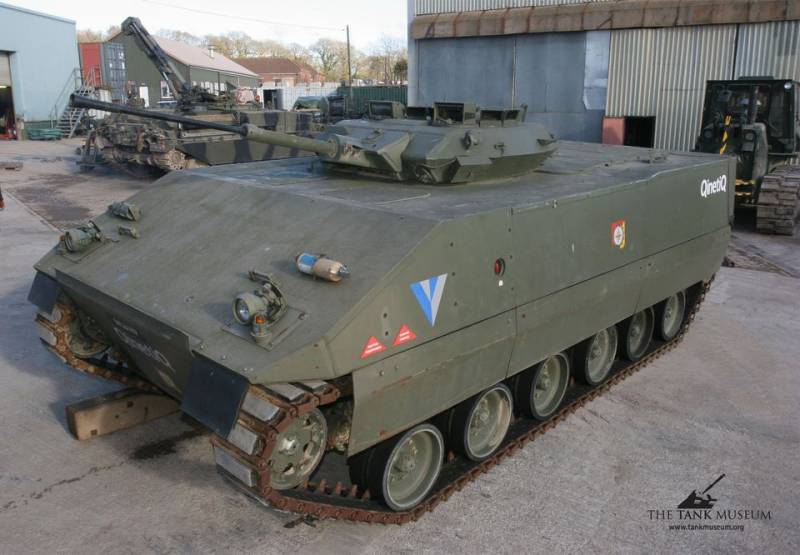 Composite armored vehicle as a museum piece. Photo Bovington Tank Museum
The army's interest in the new development was limited. The military highly appreciated the promising development and its advantages. However, they did not have a desire to launch new technologies and use them in a real project. A few years later, the development of a promising family of Ajax armored vehicles began, but in this program they again decided to use aluminum and steel armor. Whether the idea of ​​composite armor will ever return is unknown.

The fate of the prototype

After the completion of the tests, the only experienced ACAVP armored vehicle was transferred to the tank museum in Bovington. She was placed in one of the exhibition halls, along with other interesting developments of British industry. The prototype is still in good condition, and it is regularly taken to the tankport to participate in local “tank festivals ".

Since 2001, the subject of composite armor has been limitedly developed by QinetiQ. Its specialists regularly visit Bovington and inspect the ACAVP machine. Such studies provide insight into how the composite body behaves as it ages. The collected data is used in new research and can be used in promising projects. Of course, if the British army shows interest in new materials.

Ctrl Enter
Noticed oshЫbku Highlight text and press. Ctrl + Enter
We are
Is the "old" well forgotten to become the "new"? Part-2. At the call of honor and dutyTiger vs. Lynx
Military Reviewin Yandex News
Military Reviewin Google News
19 comments
Information
Dear reader, to leave comments on the publication, you must sign in.