How did the Russian worker live before the revolution? 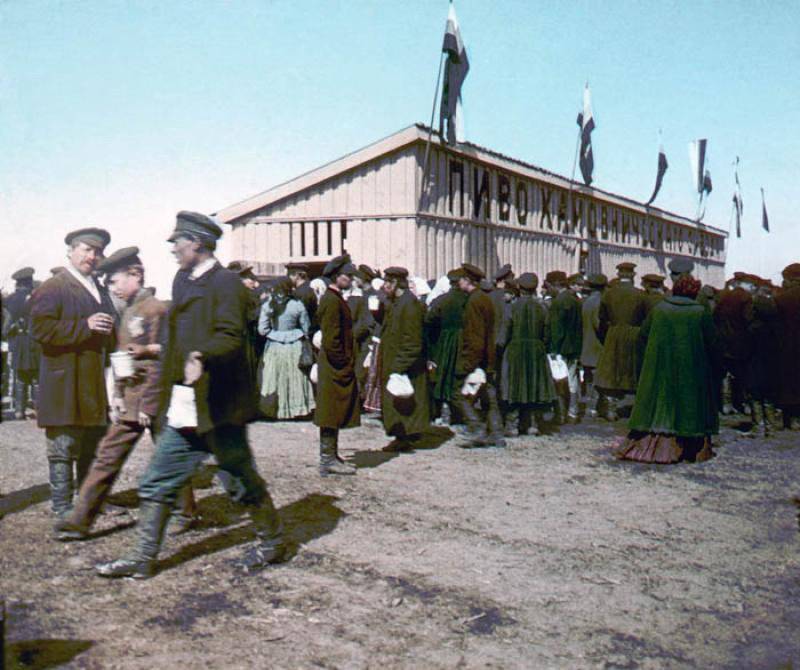 Compared to today, not bad. But the revolution was still ...

Regarding the question posed in the title, there are two opposing points of view: supporters of the first believe that the Russian worker dragged a miserable existence, while supporters of the second argue that the Russian worker lived much better than the Russian. Which of these versions is correct, this material will help you understand. From where the first version came from, it is not difficult to guess - the whole Marxist historiography persisted tirelessly about the fate of the Russian worker. However, even among pre-revolutionary literature there is quite a bit of one that supported this point of view.

In this connection, the work of Evstafi Dementieva “The Factory, What It Provides to the Population, and What It Takes from It” received the greatest fame. His second edition is walking on the Internet, and it is often referred to both by bloggers and commentators arguing with them. However, few people pay attention to the fact that this very second edition was published in March 1897 of the year, that is, firstly, several months before the adoption of the factory law establishing the 11,5 hourly day.

Secondly, the book was delivered several months earlier in the set, that is, before Sergei Witte’s monetary reform, during which the ruble was devalued by one and a half times, and, therefore, all salaries are indicated in this book in old rubles.

Thirdly, and in the main ones, according to the author himself, “The study was carried out in 1884-1885's years”, and, therefore, all its data are applicable only for the middle of the 80-s of the nineteenth century. Nevertheless, this study is of great importance for us, allowing us to compare the well-being of the workers of that time with the standard of living of the pre-revolutionary proletariat, for which we used data from annual statistical compilations, reports of factory inspectors, and the works of Stanislav Gustavovich Strumilin and Sergei Nikolaevich Prokopovich .

The first of them, who became famous as an economist and statistician before the revolution, became a Soviet academician in 1931 and died in the 1974 year, before he was three years before his 100th birthday. The second, who began as a populist and social democrat, later became a prominent Freemason, married Yekaterina Kuskova, and after the February Revolution, was appointed Minister of Food of the Provisional Government. Prokopovich took Soviet power in hostility and in 1921 was expelled from the RSFSR. He died in Geneva in 1955 year. 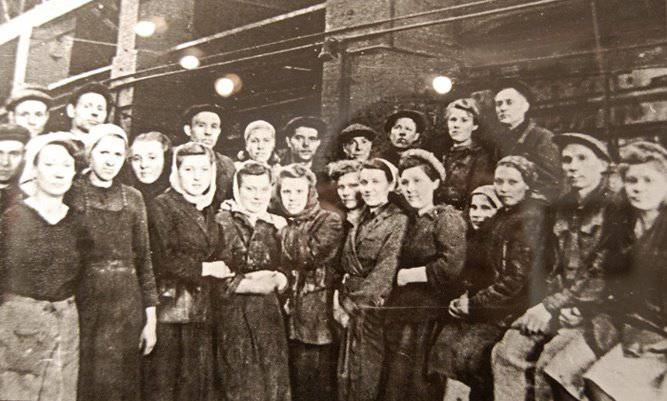 However, neither of them loved the tsarist regime, and therefore they cannot be suspected of embellishing the contemporary Russian reality. We will measure welfare according to the following criteria: 1. Earnings. 2. Working hours. 3. Nutrition. 4. Housing.

Let's start with the earnings.

The first systematic data refer to the end of the 1870-s. So, in 1879, a special commission, which was held at the Moscow Governor-General, collected information about 648 establishments of 11 production groups that employed 53,4 thousand workers. According to Bogdanov’s publication in the Proceedings of the Moscow City Statistical Division, the annual earnings of the workers of the First Throne in 1879 amounted to 189 rubles. In a month, therefore, an average of 15,75 p. In subsequent years, due to the influx of former peasants into the cities and, accordingly, an increase in labor supply, earnings began to decline, and only with 1897 did their steady growth begin. In Petersburg province in 1900, the average annual salary of a worker was 252 rubles. (21 p. Per month), and in European Russia - 204 rub. 74 cop (17,061 rub. Per month). On average, in Empire, the monthly salary of a worker in 1900 was 16 rubles. 17,5 cop At the same time, the upper earnings limit rose to 606 rubles (50,5 rubles per month), and the lower one went down to 88 rubles. 54 cop (7,38 rub. Per month).

However, after the 1905 revolution of the year and some stagnation that followed it, since 1909, the earnings began to grow sharply. For weavers, for example, wages increased by 74%, and for dyers - by 133%, but what was behind these percentages? The salary of a weaver in 1880 per year was only 15 rubles. 91 cop., And in 1913 year - 27 rub. 70 cop For dyers, it grew from 11 rubles. 95 cop - up to 27 rub. 90 cop Much better things were working with workers in scarce professions and metalworkers. Machinists and electricians began to earn a month for 97 rubles. 40 cop., Higher craftsmen - 63 rub. 50 cop., Blacksmiths - 61 rub. 60 cop., Mechanics - 56 rub. 80 cop., Turners - 49 rub. 40 cop If you want to compare these data with modern wages of workers, you can simply multiply these figures by 1046 - this is the ratio of the pre-revolutionary ruble to the Russian ruble as of the end of December 2010 of the year. It was only in the middle of 1915 that inflation began to take place in connection with the war, but since November 1915, the growth of earnings blocked inflation, and only since June 1917 did wages lag behind inflation.

Salaries of workers by year

We now turn to the duration of the working day. In July, 1897 of the year issued a decree limiting the working day of the industrial proletariat throughout the country to the law in 11,5 hours per day. By 1900, the average working day in the manufacturing industry averaged 11,2 hours, and by 1904, it did not exceed 63 hours per week (without overtime), or 10,5 hours per day. Thus, over the 7 years, starting with the 1897 year, the 11,5 hourly decree rate actually turned into the 10,5 hourly, and from 1900 to 1904 year, this rate dropped by about 1,5% annually.

However, the use of working time is determined not only by the length of the working day, but also by the number of working days per year. In pre-revolutionary times, there were significantly more holidays — the number of holidays per year was 91, and in 2011, the number of non-working holidays, including New Year holidays, would be only 13 days. Even the presence of 52 Saturdays, which have become inoperative since March 7 of 1967, does not compensate for this difference.

The average Russian laborer ate one and a half pounds of black bread, half a pound of white, one and a half pounds of potatoes, a quarter of a pound of cereals, half a pound of beef, a half lard of fat, and a ton of sugar a day. The energy value of this ration was 3580 calories. The average resident of the empire ate 3370 calories per day. Since then, Russians have almost never received such a number of calories. This indicator was exceeded only in 1982. The maximum was in the 1987 year, when the daily amount of food consumed was 3397 calories. In the Russian Federation, the peak in calorie intake fell on 2007 the year when consumption amounted to 2564 calories.

In 1914, a worker spent on food for himself and his family 11 rubles 75 kopecks per month (12 290 in current money). This was 44% of earnings. However, in Europe at that time, the percentage of wages spent on food was much higher - 60-70%. Moreover, during World War II, this indicator in Russia improved even more, and the cost of food in the 1916 year, despite rising prices, amounted to 25% of earnings. 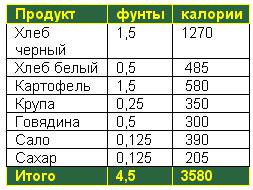 Now let's see how it was with housing. As the Krasnaya Gazeta published in Petrograd once in its 18 issue of May 1919 of the year, according to data from the 1908 year (taken, most likely, from the same Prokopovich), workers spent on housing up to 20% of their earnings. If we compare these 20% with the current situation, then the cost of renting an apartment in modern St. Petersburg would have to be not 54 thousands, but about 6 thousand rubles, or the current St. Petersburg worker should receive not 29 624 rubles, but 270 thousands. How much money was it then?

The cost of an apartment without heating and lighting, according to the same Prokopovich, was for one person earning: in Petrograd - 3 p. 51 k., In Baku - 2 p. 24 k., And in the provincial town of Sereda, Kostroma province - 1 p. 80 k., So that on average for all of Russia the cost of paid apartments was estimated at 2 rubles per month. Translated into modern Russian money, this amounts to 2092 rubles. Here it must be said that these are, of course, not the master's apartments, the rent of which cost in St. Petersburg on average 27,75 p., In Moscow - 22,5 p., And on average in Russia in 18,9 p. In these manor's apartments, there lived mainly officials of a rank up to a collegiate assessor and officers. If the master's apartments per tenant accounted for 111 square arshin, that is, 56,44 square. m, then working on 16 square. arshin - 8,093 sq. m. However, the cost of renting a square arshina was the same as in the master's apartments - 20-25 cop. per square arshin per month. 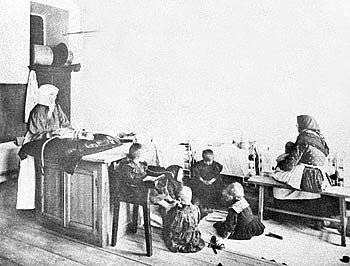 Children's room in the barracks for family workers at the Ramenskoye factory of industrial and trading partnership “P.Malyutina sons” 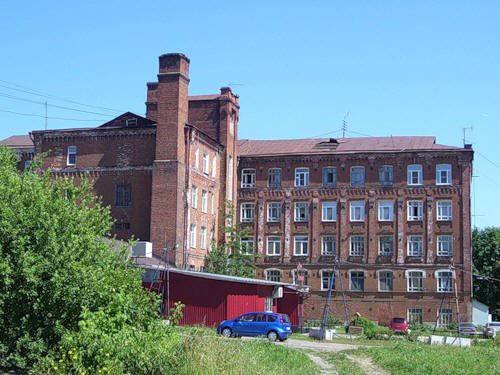 However, since the end of the 19th century, the general trend has been the construction by owners of enterprises of working dwellings of improved planning. Thus, in Borovichi, the owners of the ceramic factory of acid-resistant products, engineers, brothers Kolyankovsky, built wooden one-story wooden houses with separate outlets and garden plots for their workers in the village of Velgiya. The worker could buy this housing on credit. The initial amount of the contribution was only 10 rubles ...

... Thus, by 1913, only 30,4% of our workers lived in rented apartments. The remaining 69,6% had free living space. By the way, when in the post-revolutionary Petrograd 400 of thousands of master's apartments were freed — who was shot, who fled, and who died of hunger — the working people did not hurry to move into these apartments even for free. Firstly, they were located far from the plant, and secondly, it was worth more to heat such an apartment than the entire salary of the year 1918 ...