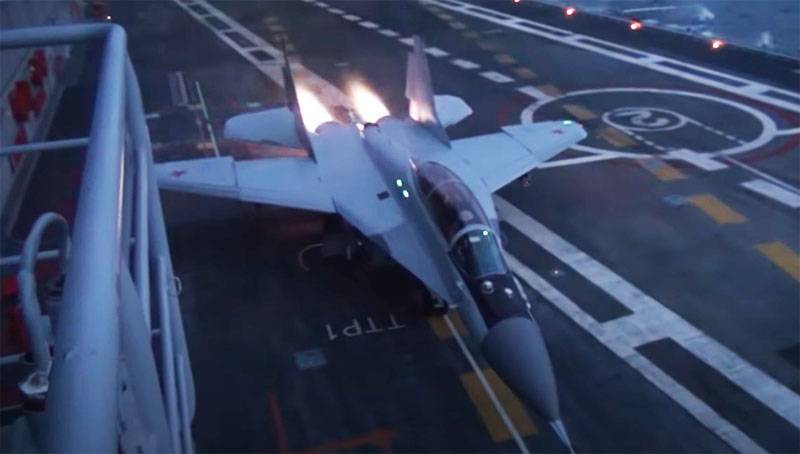 The Indian Ministry of Defense does not even report on the preliminary results of an investigation into the cause of the fall of the MiG-29K carrier-based fighter during an exercise in the Arabian Sea. Recall that a few days ago, an Indian Navy fighter assigned to the combat wing of the Vikramaditya aircraft carrier fell into the sea. One pilot was immediately rescued, the search for another formally continues to this day. During this time, several fragments of the fighter were found, including fragments of the landing gear and wing, off the coast of Goa.


The Indian press decided not to wait for any official information about the reasons for the fall of the fighter. So, in the IDN military edition, they categorically announced the following:

The national Bureau of Geopolitics is studying the issue of a possible acquisition of American-made F / A-18 Super Hornet Block II carrier-based fighters due to serious problems with the operational suitability of the Russian MiG-29K.
It was also added that an option is being considered with light combat aircraft of Indian production - LCA, in a probable version of carrier-based aircraft for the first Indian aircraft carrier "Vikrant".

It is planned to purchase 57 multipurpose carrier-based fighters for the Indian Navy.

At the same time, the Indian side traditionally tries to remove the blame from itself. From material in the Indian press:

The Indian Navy faced poor support for the MiG-29K carrier-based fighters from the manufacturer.
This testifies to the fact that the Indian press, without waiting for official conclusions about the reasons for the crash of the combat aircraft, have already decided to play it safe and shift the blame onto the Russian Federation.

Additionally, it was stated that in the Indian Navy "dissatisfaction with MiG-29 aircraft is growing."

All this is more like not an objective assessment of the situation, but lobbying for the purchase of the same American F / A-18 Super Hornet by interested parties. Apparently, the Indian media want to say that the maintenance of the F-18 "will be easier" than the maintenance of Russian-made aircraft and no emergencies with American aircraft will arise by definition.
Ctrl Enter
Noticed oshЫbku Highlight text and press. Ctrl + Enter
We are
US Navy receives first F / A-18 Super Hornet Block-3 carrier-based fighterUS Navy purchases F / A-18 Super Hornet Block III instead of F-35C Lightning II
Military Reviewin Yandex News
Military Reviewin Google News
35 comments
Information
Dear reader, to leave comments on the publication, you must sign in.