I am ashamed of the descendants. The subtleties of "Goebbels' propaganda" in Ukrainian 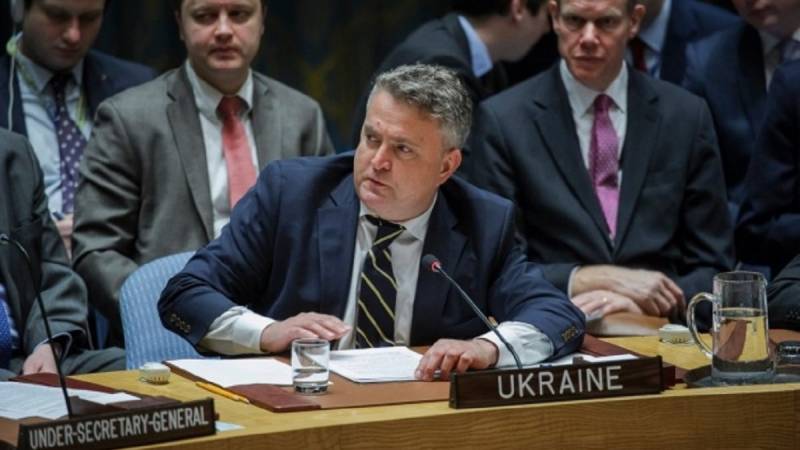 Methodical and cynical rewriting stories inside Ukraine has long been a surprise. The support and glorification of the Ukrainian Insurgent Army, which is legally prohibited in Russia, and Stepan Bandera (the glorification of Nazism) cannot be called an internal affair of Kiev. But when statements equalizing the Soviet Union and Hitlerite Germany are heard from the rostrum of the UN, the situation reaches a new level of madness.

The scandalous speech of the diplomat Serhiy Kislitsa, the permanent representative of Ukraine to the UN, included the following tirade (quote):

“September 1, 1939 was not at all the initial stage of Hitler's plan, developed, among other things, in collusion with Stalin ... During the occupation, the Soviet authorities killed thousands of Ukrainians. Then, during the retreat in 1941, the destruction and burning of important infrastructure in the cities in the face of the Nazi offensive led to the death of even more people ... ...
These cynical words from the lips of the Ukrainian diplomat sounded on the eve of December 1, when a special solemn meeting of the General Assembly took place in memory of all the victims of the war.

UN building. Source: un.org
One of the most important consequences of such pseudo-disclosures from Ukrainian diplomacy was the tacit acceptance by Western countries.

No one, except Russia, was openly indignant at such an outright lie and one-sided interpretation of the events of 80 years ago. All this testifies to the coordinated actions of the European countries, the United States and Ukraine on this issue.

The words of Kiev diplomats are perceived as if the ancestors of today's Ukrainians did not fight in the Great Patriotic War, did not die on the battlefield and under barbaric bombings, in the Gestapo dungeons and concentration camps. As if Ukraine of the 40s was an outside observer (or rather even a victim) of the bloody conflict between the communists and the Nazis. It seems that modern Ukraine is seriously faced with the question: from whom the country suffered more - from Nazi Germany or from the Soviet Union? 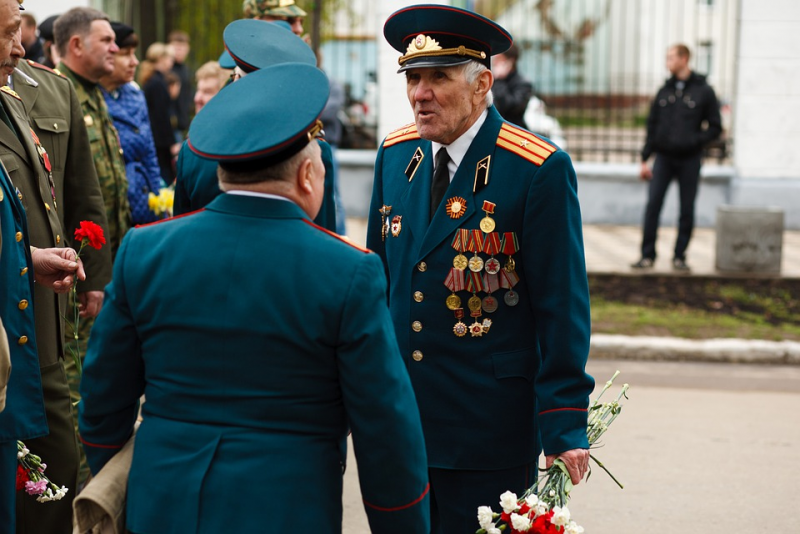 Reproaches of the destruction of important infrastructure by the retreating Red Army in 1941 have no reasonable basis. Any army forced to leave its own territory under the attacks of the enemy will do everything possible to slow down the enemy's advance and complicate the exploitation of the lands occupied by him. The laws of war are harsh, but these are the laws of war, and without this, Berlin in May 45 would hardly have fallen.

Kislitsa also remembered about the liberation of Ukraine in 1944. Here, according to the diplomat, the situation was the opposite - the Germans, retreating, left the scorched earth, and the Soviet soldiers behaved in the offensive just like barbarians. All this led to tens of thousands of unnecessary victims, for which Ukraine now blames the Red Army. It's a shame that Kislitsa did not reveal the main secret of how it was necessary to organize an offensive against one of the strongest ground armies in the world in order to avoid so many unnecessary casualties?

On the question of the killed Ukrainians. If we are talking about the 14th SS Volunteer Infantry Division "Galicia", then more than 22 thousand Ukrainians in its ranks in what status should be considered? Probably, it is worth listening to the conclusions of the Nuremberg Trials, which unequivocally ranked all SS units as criminal.

Kislitsa is certainly aware that the tribunal in Nuremberg was ruled by the countries of the anti-Hitler coalition. And such decisions were made collectively. Archival data state that up to 80 thousand Ukrainians were ready to voluntarily join the ranks of the SS punitive detachments.

The short memory of Kislitsa and the country's leadership is a real slap in the face of Ukrainians who honorably defended their homeland from fascism. Unfortunately, there are more and more such "sour" in Ukraine.

Any propaganda doctrine must be based on myths. And myths, in turn, are born within the state machine. This simple Goebbels formula has found its place in Ukrainian historical science. Whole "falsification factories" have appeared, whose activities are aimed at rewriting the history of the Great Patriotic War and forming the "correct" consciousness of a citizen.

Such stories cannot do without foreign sponsorship. So, in 2019, a collection with the characteristic title “Revision of History.” Was released for grants from EU funds within the framework of the Eastern Partnership program and the J. Soros Foundation “Renaissance”. Russian historical propaganda and Ukraine ”.

In the best traditions of the Kiev authorities, the authors deny Ukrainian collaborationism, the terror of the "Ukrainian Insurgent Army" (banned in the Russian Federation) and the Nazi origin of the slogan "Glory to Ukraine". Author Gritsak was less categorical about the "Ukrainian police" and even partially admitted its existence, but "it was not ethnically fully Ukrainian, there were different groups and strata, along with the soldiers of the former Red Army."

The staff of the Institute of History of the National Academy of Sciences of Ukraine also echoes the Western donors. Last year, in one of the review articles dedicated to the 80th anniversary of the outbreak of World War II, historians Vidnyansky, Gritsyuk and Lysenko talked about the joint war between Germany and the USSR against Poland. Although this should not be surprising - a similar point of view is shared by the German media, in particular, Deutsche Welle.

For some reason, historians kept silent about the fact that part of the territory of modern Ukraine can be considered by the Poles "illegally occupied" and, accordingly, subject to return. Do not forget that any free interpretation of historical events leads to consequences that are sometimes difficult to cope with.

Another blank spot in the historical memory of modern Ukraine was the genocide of the Poles, which went down in history as the "Volyn massacre".

In 2019, the mentioned Institute of History published an interesting article by the Lviv scientist Kozitsky, in the text of which the genocide was allegedly not confirmed. Based on complex conclusions, the author refuses to interpret the punitive actions of the OUN and UPA (prohibited in the Russian Federation) against the Polish population of Volyn as a form of genocide. For the genocide then, allegedly, little was enough: the whole point is the lack of appropriate "social mechanisms" among the Ukrainian nationalists and the lack of a clearly formulated "anti-Polish ideology". Quote:

"The Ukrainian side did not carry out any measures that could be qualified as preparation for genocide ... There are no grounds to assess the anti-Polish actions of the Ukrainian partisan movement in Volyn in 1943 as a pre-planned and organized genocide."

It turns out that now for an act of genocide it is necessary to have some "social mechanisms" and to form the notorious "ideology". If this is not the case, then everything can be interpreted exclusively as an innocent mass murder.

Such monstrous historical conclusions, it seems, were also Ukraine's flirting with Turkish partners. Ankara must have adopted such conclusions to justify the centuries-old Armenian genocide.

Decommunization and banderization of Ukrainian society has been going on for many years. For a long time now, the glorification of collaboration has been the task of the Ukrainian Institute of National Remembrance, which appeared in 2006 at the initiative of President Yushchenko. Under the auspices of this institute, Bandera exhibitions and expositions are regularly held throughout Ukraine.

In 2019, with the participation of an active revisionist, director of this institute Vyatrovich, another propaganda exhibition "Ukrainian Insurgent Army: Response of an Unconquered People" was organized, within which stands with photographs of Bandera, Shukhevych and other leaders of the insurgent army, as well as Ukrainian SS men from the division were exhibited. Galicia ". Based on the materials of the exhibition, a special booklet was published with a foreword by Vyatrovich, where you can read:

“Presenting UPA soldiers as traitors to their people and criminals is now difficult for those who do not see Ukraine as free and strong in the future. After all, the history of the Ukrainian rebels shows how decisive the response of Ukrainians to an encroachment on their freedom can be. "
In December 2018, Ukrainian President Petro Poroshenko signed a law on benefits for former members of the military wing of the Organization of Ukrainian Nationalists - Ukrainian Insurgent Army, banned in Russia.

The popular line of behavior continued under the current leader of the country. Elected in April 2019, Zelensky, immediately after the election, supported decommunization (stating that it was "the choice of society"), and also personally approved the glorification of Bandera:

“Stepan Bandera is a hero for a certain percentage of Ukrainians, and this is normal and cool. This is one of those people who defended the freedom of Ukraine ”.

Pit for a new war

Ukraine is desperately looking for heroes to distance itself from Russian history. And this results in new rounds of national hysteria. The latest example was the shameful statements of Kiev diplomacy in front of the entire world community.

The worst thing is that what was said from the rostrum of the UN did not provoke a reaction from those present revealing a blatant lie.

"As soon as the lessons of the past war are forgotten, it becomes the foundation for a new one."

Ctrl Enter
Noticed oshЫbku Highlight text and press. Ctrl + Enter
We are
How can Russia survive and win in the 21st century?Russia: the Moon, Mars and further everywhere ... Speeches of the participants of the Izborsky club in the corporation "Rosobschemash"
Military Reviewin Yandex News
Military Reviewin Google News
116 comments
Information
Dear reader, to leave comments on the publication, you must sign in.