How anti-ship missiles of the Pike family were created 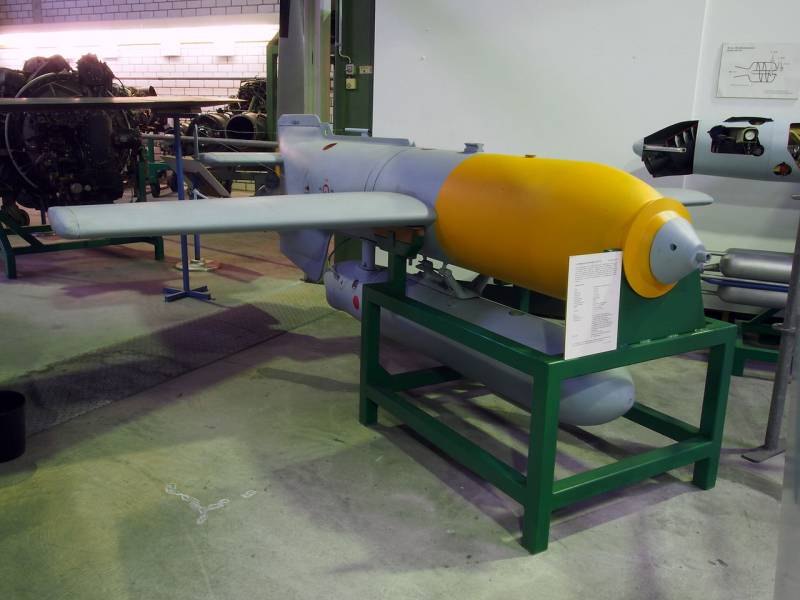 Guided bomb Hs 293A1. A booster engine is suspended under the hull, which makes a bomb akin to rockets. Photo Wikimedia Commons

Following the results of the Great Patriotic War, the USSR gained access to a lot of promising German developments, incl. in the area of aviation means of destruction. In particular, Soviet specialists were able to study the Hs 293 and Hs 294 guided bombs from Henschel. it weapon interested the military and got a chance for further development.

In 1947, KB-2 of the Ministry of Agricultural Engineering, ordered by the Ministry of Defense, carried out several test drops of the Hs 293A1 bomb. It was supposed to clarify the characteristics of the product, to fine-tune it and, upon receiving positive results, to establish its own production. In the shortest possible time, our aviation could receive a fundamentally new effective weapon.

During the tests, a Tu-2 bomber was used as a carrier, equipped with German and Soviet assembly controls. Tests have shown that the bomb is not distinguished by high flight and combat qualities - and is not of great interest to the USSR Air Force or Navy. Work on Hs 293 was stopped in its original form; production launch was canceled.

On April 14, 1948, the Council of Ministers instructed KB-2 to develop a "jet aircraft naval torpedo" RAMT-1400, code "Pike". The project was based on ideas and solutions from the Hs 293. At the same time, more stringent requirements were imposed on the new "torpedo". In fact, the customer wanted to get a full-fledged homing missile and an unusual "diving" warhead. 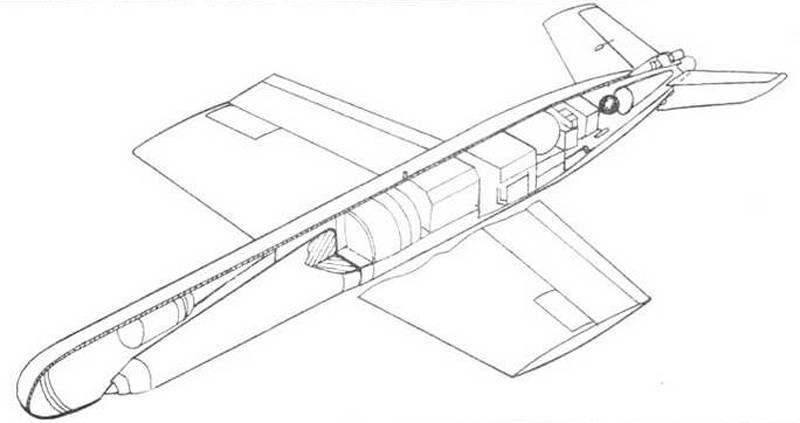 Design and layout of the "torpedo" RAMT-1400A. Graphics Airwar.ru
KB-2 quickly enough formed the general appearance of the future RAMT-1400. It is noteworthy that this product, both externally and in its design, was radically different from the Hs 293 bomb, but it was similar to another foreign development. There is a version that explains this circumstance. According to her, at that time Soviet intelligence was able to obtain data on the American project Kingfisher. The developments from the USA were considered more successful and promising, which led to the similarity of the Pike and the AUM-N-6 missile. Materials on the German bomb were sent to the archive as unnecessary.

At the request of the army, the RAMT-1400 should have been equipped with an active radar homing head. KB-2 feared that the creation of such a GOS would be too complicated and take a long time. In this regard, there was a proposal to develop two unified "torpedoes". The product RAMT-1400A "Pike-A" was proposed to be equipped with radio command guidance, and the RAMT-1400B was supposed to receive the GOS. At the end of 1949 this proposal was approved by the Council of Ministers.

The Schuka-A project proposed the construction of a 6,7 m long projectile aircraft with a 4 m straight wing span, equipped with spoilers. All the necessary units were placed inside the cylindrical fuselage, incl. fuel and oxidizer tanks, and a liquid propellant rocket engine. A V-shaped tail with rudders was placed on the tail. Under the head of the fuselage, in front of the wing, a detachable "diving" warhead weighing up to 650 kg with 320 kg of explosive was suspended. The launch weight of the rocket reached 2 tons. According to calculations, a high-speed subsonic flight was provided at a distance of up to 60 km.

The development of the airframe and individual systems of the "Shchuka" was carried out in 1949. By the end of the year, 14 test launches were performed from the Tu-2 aircraft, and the experimental missiles did not have radio equipment and were controlled by an autopilot. In 1950, the rocket was tested in flight with the Hs 293 control system. Only in the middle of next year, the tests of the Shchuka-A began with the standard control equipment KRU-Shchuka. 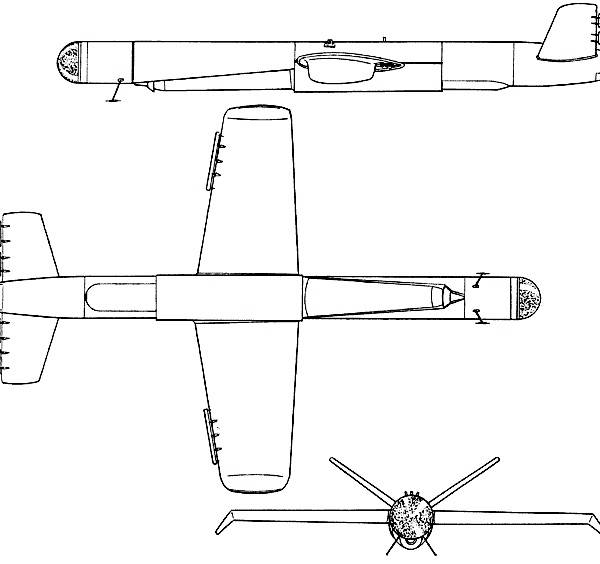 Diagram of the RAMT-1400B product. Aviaru.rf graphics
It was proposed to drop the "aircraft torpedo" from the carrier aircraft and then monitor its flight using the onboard radar. The equipment of the carrier in manual or semi-automatic mode was supposed to generate and transmit commands for the flight. The task of the operator-gunner was to bring the rocket to a point 60 m from the ship. When the warhead fell, it separated and hit the target in the underwater part.

At the end of 1951, GosNII-2 was created on the basis of KB-642. The following year, this organization conducted 15 launches of RAMT-1400A from Tu-2 and Il-28 bombers, of which 8 were successful. At this stage, there was a proposal to create a new modification of the missile with a reinforced warhead, suitable for hitting ground targets. This project was not even brought to the test.

In parallel with the "Pike-A" was the development of a more advanced "torpedo" RAMT-1400B. NII-885, which faced serious difficulties, was responsible for the development of the RG-Shchuka seeker. Because of this, the first launches of the RAMT-1400B were carried out only in 1953, and the rocket carried only a radio altimeter and did not have a seeker. Products with a complete set of equipment first flew in the spring of 1954. The new ARGSN did not fully cope with the task: the radio signal was reflected from the water and disrupted guidance.

"Pike-B" was slightly longer than "Pike-A", but received a wing span of 4,55 m. At the same time, the weight was reduced to 1,9 tons. Flight characteristics remained the same, the combat load did not change.

KSShch rocket in launch position. Photo Aviaru.rf
After dropping the "torpedo" from the seeker had to independently descend to a height of 60 m and perform a horizontal flight using an autopilot and a radio altimeter. At 10-20 km from the target, the ARGSN was switched on, providing an exit to the lead point. At a distance of 750 m, the rocket went into a dive and fell into the water 50-60 m from the target.

On February 3, 1956, the Council of Ministers, based on the test results, ruled that the Shchuka-A missile with radio command guidance should not be put into service. It was decided not to modify the more complex Pike-B, and the development of airborne anti-ship missiles stopped there. However, by this time work was underway on an alternative project.

In 1954, TsKB-53 proposed a project for the installation of Pike missiles on the destroyers of pr. 30-bis. This proposal was approved, and at the end of the year the Council of Ministers instructed GosNII-642 to develop a new modification of the "torpedo" RAMT-1400B for installation on ships. This project was named KSShch ("Pike" ship projectile). In parallel, the development of a launcher and other components for ships was asked.

The original airframe was redesigned for the installation of the AM-5A turbojet engine and new tanks. In the tail section, a unit for installing a starting solid fuel engine was added. Created a new swept wing with a folding mechanism. The total length of the KSShch missile reached 7,7 m, the wingspan was 4,2 m (less than 2 m when folded). The total mass of the product is 2,9 tons, of which 620 kg were for the "diving" warhead. Speed ​​characteristics remained the same, and the estimated range increased to 100 km.

The KSSH was supposed to receive an ARGSN of the "RG-Shchuka" type, created earlier and brought to an operational state. In this regard, the flight profile and targeting methods remained the same as for the Shchuka-B product - adjusted for takeoff from the ship using the starting engine. 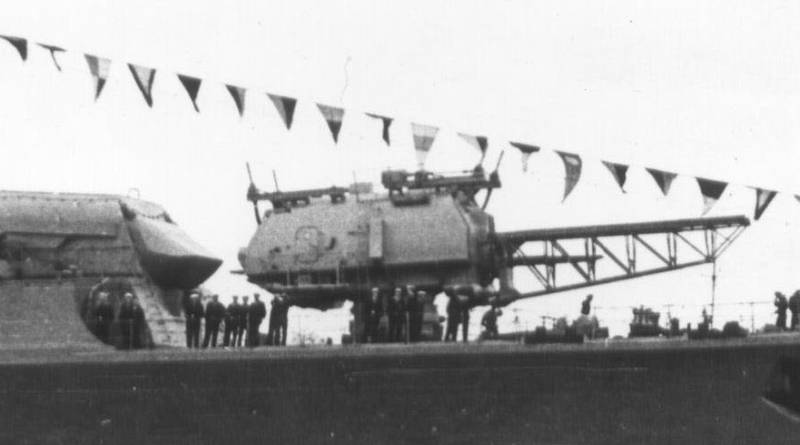 Launcher for KSShch on the carrier ship. Photo Ship.bsu.by
For KSShch developed rail launcher SM-59 based on a turntable. Also, the carrier ship was supposed to receive instruments for generating data for firing, launch controls, devices for storing missiles and a crane for installing them on a rail.

The first launch of the shipborne "Schuka" from a ground-based launcher took place in June 1956. Soon three more successful launches took place, and all the prototypes showed themselves well. In February 1957, firing began from an experimental vessel, which was the modified destroyer "Bedovy" pr. 56. It carried one SM-59 installation and an ammunition load of seven missiles.

The first launch on February 3 ended in failure due to autopilot failure. The next prototype successfully hit a floating target. Then there were several unsuccessful and successful launches, and in early September, the KSShch hit a remote-controlled boat, moving at a speed of 30 knots.

According to the test results, the KSShch missile as part of the P-1 "Strela" complex was recommended for adoption. In 1958, a corresponding resolution of the Council of Ministers was issued. By this time, the construction of carrier ships for the new weapons had begun.

The first carriers of the P-1 and KSShch were the destroyers of the project 56-M / EM - "Bedovy", "Discerning", "Elusive" and "Irresistible". They received one launcher at the stern and carried ammunition for up to 8 missiles. The destroyer 57-bis was developed on the basis of the existing project 57. Initially, it was planned to equip it with two SM-59 installations, but then only one had to be left at the stern. Nine ships were built along the 57-bis Ave.

The destroyer "Elusive" pr. 56-M shortly before modernization, 1970. Photo by the KVMF of Great Britain
Destroyers with guided missile weapons served in all the main fleets of the USSR Navy. They were actively involved in exercises and military service. Over the years of operation, the ships have repeatedly shown all the advantages of missile weapons over systems of other classes. The natural result of this was the development of new anti-ship missile systems.

By the mid-sixties, the KSSh rocket was obsolete, and new models were created to replace it. In this regard, it was decided to remove it from service and to re-equip the carrier ships. Destroyers of pr. 56-E / EM were redesigned along pr. 56-U. The SM-59 product was removed from them and replaced with a 76-mm artillery mount. Ships of the "57-bis" type during the restructuring in "57-A" received a launcher of the "Volna" complex.

The last launches of KSShch missiles took place in 1971. The Elusive destroyer of the Black Sea fleet consistently launched five such products and provided training for the calculations of anti-aircraft complexes. It is noteworthy that the missiles at the nominal flight altitude successfully broke through to the conditional target and were not shot down. Soon after these events, "Elusive" went for modernization along 56-U Ave.

First but not the last

Work on the promising Pike anti-ship missile began in the late forties and was based on foreign developments. In the future, the project was repeatedly changed and refined, and its purpose was also changed. As a result, the military aviation did not receive its missile, but similar weapons were made for the navy.

The process of creating several versions of "Pike" took a lot of time and demanded a lot of money. However, with his help, it was possible to gain the necessary experience and use it in the creation of the following missile systems, aviation and ship. In the early seventies, the KSSH was removed from service - and the place of this rocket on the ships was taken by more advanced products.