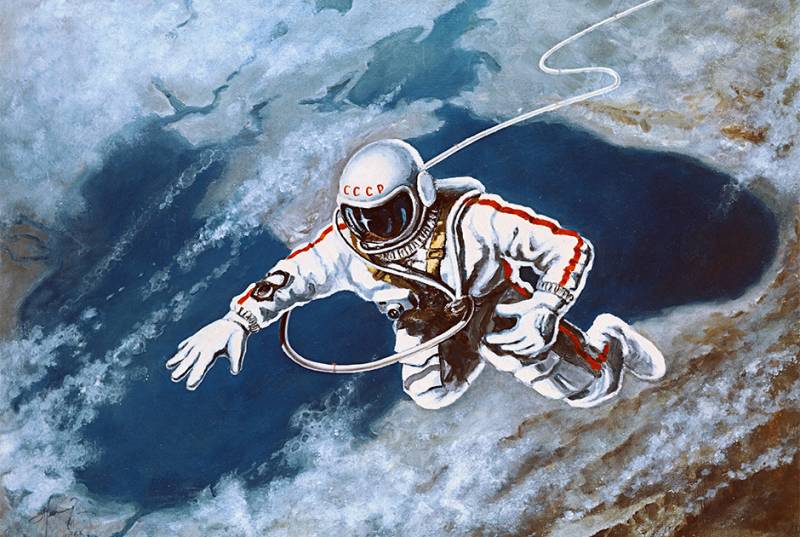 In the early 1980s, the Soviet Union seemed like a mighty titan with no weaknesses. It is clear that there were shortcomings and problems, but they seemed small and quite solvable. The world, where with delight and awe, where with fear, looked at the red giant who controlled half of Eurasia. A superpower that possessed all the avant-garde technologies and industries. With advanced science and school. With the best land army in the world. Militarily, the USSR could not be won. War meant either the defeat of the West or a nuclear apocalypse.

Surprisingly, but true: by the beginning of the 80s, the West, led by the United States, was losing the Third World War - the so-called. "Cold". If it hadn't been for the collapse of the USSR in 1991, the United States would have fallen. Since Vietnam, the US has been hit by a psychological crisis. The younger generation was corrupted by pacifism, sexual revolution and drugs. The West was plunging into a new crisis of capitalism. Lost the economic race between Japan and the USSR.

It is now dominated by the myth that the Western (capitalist, market) system was more effective than the Soviet (socialist, planned), and therefore won. They say that the Union collapsed under the weight of socio-economic contradictions, could not stand the race with America. In fact, everything was different.

The Soviet system proved its effectiveness and leadership during the Great Patriotic War. USSRꟷRussia crushed the most terrible and most effective war machine of the West - the Third Reich. She not only did not bled and did not fall into depression, recovering for decades after terrible human, cultural and material losses. But on the contrary, it became stronger, turned from one of the great powers into a superpower, began to compete on equal terms with the Western world.

The capitalist West retreated step by step. The colonial system collapsed. The newly liberated countries and peoples looked with hope at the successes of Russians on the path of building a new society of knowledge and creativity. After the recovery period, the Western world began to plunge into a new crisis.

Now it seems surprising, but in the early 80s, Moscow, with the old elite that had lost its energy and healthy aggressiveness, with a growing and ossified bureaucracy, with a growing imbalance in the economy, with a people who lost discipline and faith in communism, almost defeated the West. Despite the mistakes of foreign policy, when billions of full-fledged people's rubles were spent on supporting new African and Asian countries, "friendly" regimes. Despite mistakes in the arms race, when large amounts of resources were spent on the production of thousands of aircraft, tanks and guns, although the country's security was already ensured. And it was necessary to focus on breakthrough projects, in particular, on the programs for the exploration of the Moon and Mars.

Why was the USSR close to victory? The point is in the Stalinist system - the foundation of Soviet civilization. She had a huge reserve of strength and efficiency. Even after Khrushchev's destructive experiments and Brezhnev's stabilization (which began to turn into a "swamp"), the Union was still rushing forward, towards the stars.

Mobilization, creative opportunities in the country and people were colossal. It is enough to look through the filing of the magazines "Technology of Youth". The Soviet civilization was literally seething, it was overflowing with already experienced scientists and designers, and potential young geniuses and talents. Dozens and hundreds of wonderful projects and developments that could turn the life of not only Russia, but all of humanity. 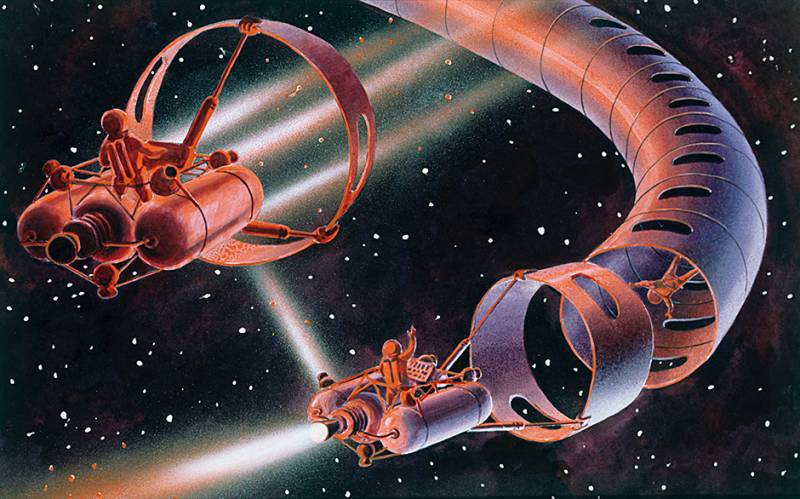 One step away from another great victory

Despite its shortcomings, the Soviet bureaucracy was smaller, cheaper, and more efficient than the American one (like the current Russian one). The United States under President Ronald Reagan (1981-1989) began a new super-expensive arms race. However, it turned out to be, as it turned out later (mostly exaggerated) for Moscow.

In addition, the Union had effective and cheap responses to any American move. For example, the heavy, stealthy strategic bomber B-2 Spirit became the most expensive aircraft in stories aviation... In 1998, the cost of one car was $ 1,1 billion, and taking into account NIOC - over $ 2 billion. In the USSR, with that kind of money, it would be easy to put into service several strategic missile systems of railway-based RT-23 UTTH "Molodets" (in the West they were called "Scalpel"). Or a couple of dozen strategic topol-M mobile complexes (Serp in the West).

And the Strategic Defense Initiative (SDI) or the "Star Wars" program was generally impracticable. The United States then could not deploy space missile defense. It was also easily overcome by Soviet heavy strategic missiles with a dozen warheads and a host of decoys. Plus a program of maneuvering warheads and the deployment of a simple system of fighter satellites that would immediately shoot down enemy combat platforms at the start of a war.

If Stalin were in the place of Andropov or Gorbachev, he would have received hundreds of opportunities to bring the USSR to a new level of development, ahead of the West by decades. He would have had excellent starting opportunities, and not a destroyed country, economy and demoralized society (like the 1920s). Excellent economy and production, advanced technologies (which lay in bulk "under the cloth").

The USSR was a great industrial and technological power. Industrial production was about 70% of America's (and we didn’t milk a large portion of the planet using the dollar system). Agriculture ensured the country's food security. Educated people. The world's best system of science, design bureaus and research institutes, school. Armed forces that guaranteed the safety of the people. A nuclear arsenal that made open aggression by the West impossible.

It was only necessary to put things in order at the top, among the bureaucracy, to stop decay in the national republics (by cleaning local cadres, the people would not even notice this). Conduct several high-profile demonstration trials of elite major thieves. Restore discipline, including production. Simple economy and optimization of weapons, money for breakthrough projects, and not thousands of new tanks.

The military-industrial complex under Brezhnev began to live its own life, disregarding the real possibilities of the economy and the treasury, scattering funds over tens and hundreds of projects of the same type. We have been producing clearly an excess of weapons: aircraft, helicopters, tanks, armored cars, guns, etc. Huge stocks of weapons had already been accumulated, it was possible to simply upgrade the existing equipment. Concentrate efforts on advanced developments, primarily in aerospace technology, precision weapons, etc.

In foreign policy: refuse to feed various "allies" from Asia and Africa. "Optimize" the war in Afghanistan. Instead of military operations: actions of special operations forces, special services. Withdraw troops, but continue to provide assistance to the pro-Soviet forces with the help of advisers, air force strikes on terrorist and bandit bases, weapons, equipment, materials, fuel and ammunition.

At the same time, by freeing up resources and funds, it was possible to quickly solve the problem with consumer goods. Development of light industry. As under Stalin (Why Khrushchev destroyed the Stalinist artels), to allow production artels, cooperatives - small and medium-sized businesses aimed at producing consumer goods and food. Not of a trade-speculative, parasitic nature, as under Gorbachev, but of a production one.

Thus, the Soviet Union could quickly increase the output of consumer goods to the average European standard. Thus, to solve the problem of a part of Soviet society, satisfying the philistine needs of citizens. In several years the housing problem was also solved. All that was needed was a freed up resource and the development of new construction programs (homesteads for rural areas, wooden construction at a new level, etc.). 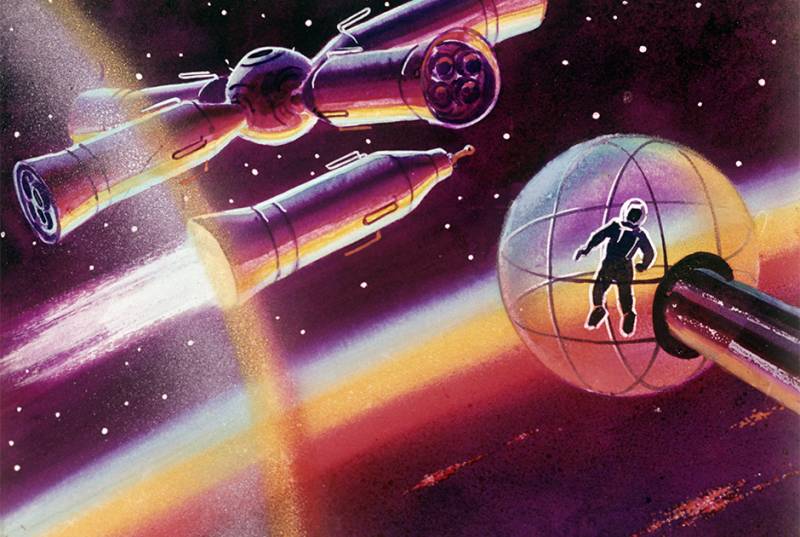 Drawing "Construction of an orbital station" by Andrey Sokolov and Alexey Leonov.

As a result, the Soviet Union had every opportunity not only to maintain its superpower status in the late XNUMXth - early XNUMXst, but also to make a new breakthrough into the future. Not only to overtake the West for decades, but also to bury the capitalist world, already rotting and on the verge of a systemic crisis and subsequent catastrophe. In fact, this was done by red China, which had thoroughly studied the positive experience of Stalin and the negative one of Gorbachev. But the starting conditions for the PRC were worse, so the Chinese have so far been able to enter the position of the second superpower, partially replacing the USSR-Russia on the world stage. And China (without Russian spiritual and intellectual potential) cannot become a world leader.

In the early 1980s, Soviet civilization had every opportunity for a new great breakthrough (the first was under Stalin and in the early years after him). Stalin created a new world and society. A special civilization. A society of knowledge, service and creation. Russia could become the center of an alternative civilizational development, more attractive to humanity than the Western slave project. Even the decades of Khrushchev and Brezhnev, when, due to the refusal to continue the Stalinist course of development, and through destruction, chattering and dispersion, the potential of the USSR was undermined, our state still had excellent "trump cards" for winning the Great Game.

Stalin created a country-corporation, a country-order, a single monolith, ready for great achievements and victories. The union could concentrate forces and means on correctly selected priorities and tasks. For decades, this opportunity was used mainly for the arms race and the development of the military-industrial complex. But the security of the USSR was already ensured for decades to come. It was enough to modernize several strategic missile systems.

Therefore, it was possible and necessary to set other goals. For example, the first to create new energy, to master thermonuclear, the energy of hydrogen, wind, sun, waves and bowels. With a focus on energy saving. Create the cheapest and cleanest construction technologies. Return to space programs - to the Moon and Mars. To make a humanitarian and technological revolution, to be the first to create centers for training personnel with awakened abilities of the central nervous system ("superhumans").

The USSR had huge production capacities. A splendid engineering, research building that could solve almost any task. The myth about the USSR, which produced only "galoshes", was created in the "democratic" RF in order to hide the brilliant achievements of Soviet civilization from the people.

The Soviet education system produced hundreds of thousands of new creators and creators every year. That is, there was a potential to expand the capabilities of academic towns, to create scientific technopolises with minimal bureaucracy. Also in the USSR, there were excellent organizational and managerial technologies “under the cloth”. They made it possible to solve the problem of the growth of bureaucracy, its sluggishness and low efficiency. Implement the most complex programs for the development of the country without the growth of the bureaucratic apparatus, by increasing efficiency and combining the capabilities of existing structures. Organizational technologies linked the work of thousands of organizations, institutes, factories and collectives of various ministries and departments into a single whole.

The only problem was that the Soviet elite did not want to do this. Did not decide on a new great victory.

Moscow no longer wanted to take risks, conflict and change something radically. The USSR did not lose because of the backwardness of the economy, lack of resources, technology or specialists. Not because of the flaws in the education system.

The key is in the gradual psychological degradation of the Soviet elite. It was our elite that refused to fight and to throw itself into the future. It turned out to be easier for her to negotiate with the West and enjoy the world.

The whole country relaxed after the elite.