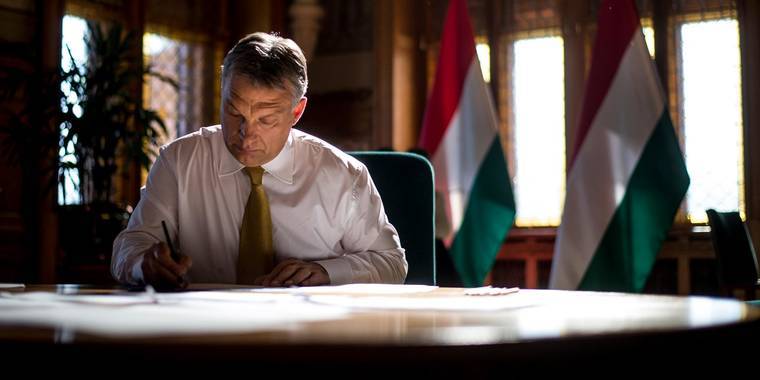 Part of the internal conflicts that are currently shaking the European Union is the open controversy between the American billionaire George Soros, widely known for his interference in the affairs of a large number of sovereign states, and Hungarian Prime Minister Viktor Orban. In fact, between the two politicians (and it is difficult not to consider Soros as such) a discussion is being held not so much about the specific current problems of Europe, but about the path it will take in the future.


The dispute was initiated by Soros himself, who rather unceremoniously intervened in the ongoing conflict within the EU between Brussels on the one hand, and Warsaw and Budapest on the other. Without going into the details of this confrontation, it is worth mentioning that Poland and Hungary are under a flurry of criticism from the European bureaucrats, the reason for which is the changes they have taken in their own judicial systems. However, this is only an apparent reason. In fact, we are talking about a much wider range of contradictions.

Both Poles and Hungarians categorically do not want to follow the path of following a whole range of "common European values", which in Brussels are classified as fundamental. The attitude towards EU migration policy, "LGBT rights", and the like that cause irritation in conservative (as by the standards of modern Europe) Hungary and Poland is not a complete list of real controversial issues. By and large, we are talking about resistance to the processes of globalization that are sweeping the Old World.

Brussels decided to settle the conflict with the usual methods: by threatening to deprive these two countries of subsidized funding. Warsaw and Budapest, instead of "being afraid and penetrated," answered in the same vein - they blocked the EU budget next year in the process of voting for it. Do you give money? So let no one get them! The situation began to acquire all the signs of an impasse, and then one of the main globalists of the planet (if not the most important), George Soros, decided to intervene in the conflict.

The article he published on the website of the Project Syndicate not only calls on Europe to “confront Hungary and Poland,” but directly indicates that this should be done as tough as possible. At the same time, the founder of the "Open Society" is not at all shy in expressions, directly calling Viktor Orban and Yaroslav Kachinsky "political corrupt officials." Soros also dubbed the Hungarian prime minister a "kleptocrat", ascribing to him almost attempts to "usurp power for life." The accusations are very grave by the standards of the zealots of "European values".

By the way, among them there is also indignation about Budapest's intentions to purchase a Russian vaccine against coronavirus. Well, this puppeteer of "color revolutions" has never been a friend of our country, so everything is just natural here. Soros ends his angry philippics with quite specific recommendations to Brussels: simply bypass the Hungarian-Polish budget veto, while leaving these two countries without a euro cent of money. Let them suffer ...

The answer of Orban, insulted to the depths of his soul, and who had not previously harbored a single gram of warm feelings for Soros and the structures headed by him, did not keep himself waiting. The hitch came only with the fact that the article of Soros's opponent Project Syndicate flatly refused to publish. Nevertheless, she, of course, saw the light. We must pay tribute to Orban - there is much less poison and bile in her, and there are much more deep maxims and very sound reflections on the fate of Europe. However, he still could not resist calling Soros an "economic criminal" and "a world speculator who destroyed the lives of millions." As well as from noticing: in fact, it is inappropriate for the prime minister of a sovereign state to debate with such dubious personalities as the head of the Open Society.

However, he supported the dispute. Orban's main reasoning is that he is not opposed to the European Union, but against that colossal corrupt and criminal "empire" created by Soros, who only pretends to be a philanthropist, but in fact is a power-obsessed maniac who seeks to create a kind of "multi-ethnic and multicultural" "New empire" under its own leadership. The Hungarian prime minister reproaches politicians and officials from Brussels for "succumbing" to this destructive aspiration, while openly saying that many of them have long been "bought by Soros and are on his salary."

Viktor Orban argues that the values ​​declared by the Open Society and its owner in no way have anything to do with freedom and independence, but are only well-veiled slavery. The Hungarian Prime Minister openly opposes the liberal democracy from Soros to Christian democracy, the main value for which is freedom of informed choice, and not blind submission and adherence to the dictates of the majority.

Ultimately, Orban speaks of a "battle with the new Brussels empire" confronted by "nation states" wishing to preserve their identity and freedom, one of the main threats to which he sees "Soros's network." Based on this, we can say that a fair political "storm" is gathering in the Old World. Who will win, and how such battles will “backfire” in the already weakened “united Europe”, is still difficult to say. It will certainly not be boring, however.

Ctrl Enter
Noticed oshЫbku Highlight text and press. Ctrl + Enter
We are
Soros capitulated?Reports from the militia of New Russia for 27-28 September 2014 of the year
Military Reviewin Yandex News
Military Reviewin Google News
28 comments
Information
Dear reader, to leave comments on the publication, you must sign in.