Remote controlled assassination. Who really benefited from the death of Mohsen Fakhrizada? 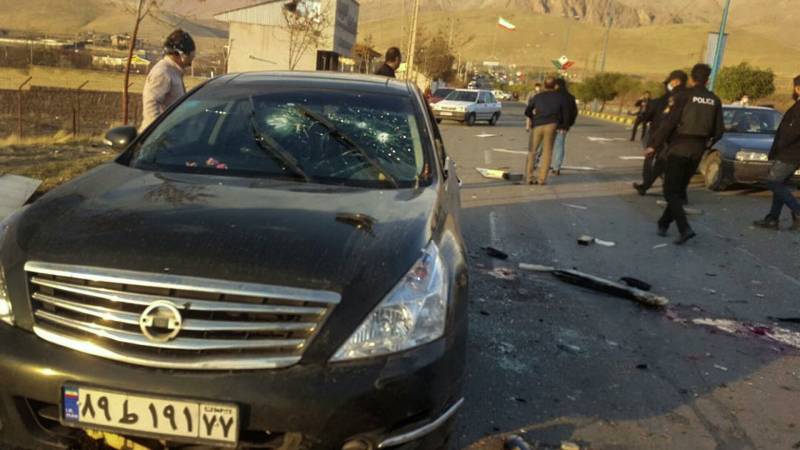 A new word in terrorism

Al Alam TV claims that the leading developer of Iran's nuclear program, Moskhen Fakhrizadeh, was shot from a remotely controlled weapons... At the same time, no detailed information on the nature of the attack is provided. They are limited only to a certain machine-gun installation controlled via an orbital satellite. At the time of the attack, it was mounted on a car and opened fire as Nisssan Teana approached with a nuclear scientist.

After the attack, according to Iranian news agencies, the machine-gun mount self-destructed. And already on the rubble the Iranians identified its Israeli identity. Judging by the photographs from the crime scene, the machine gun (or automatic rifle) worked at a target head-on through the windshield of Nissan at a distance of several tens of meters. It is not known if the fire was fired at the moving car with the scientist or if it was somehow forced to stop. 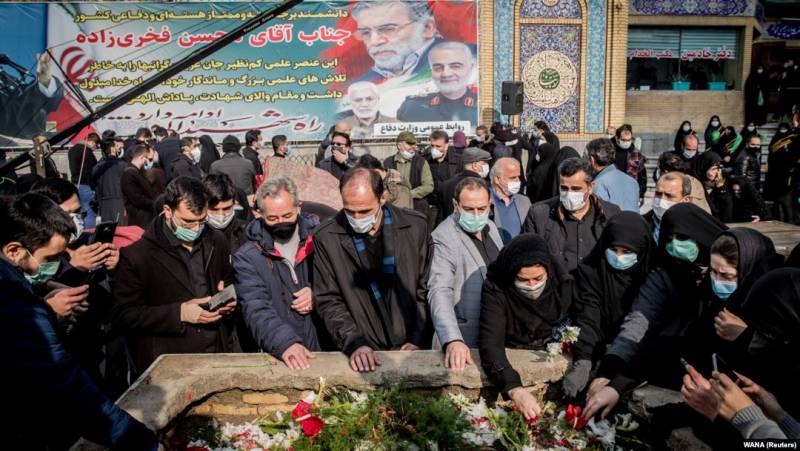 Source: gdb.rferl.org
The Iranians are confused in their testimonies, indicating a different number of victims of the assassination attempt - from three to four people who accompanied Fakhrizade died. And it is not known whether the VIP passenger himself is included in this number. According to one of the versions, the nuclear scientist was seriously wounded during the attack and died already in intensive care. Other Iranian sources claim that the founder of the nuclear program was killed on the spot. Be that as it may, the high-profile assassination attempt was an example of a new type of high-tech terrorism, about which little was previously known.

The very method of attacking the father of the Iranian nuclear program looks quite unusual. Eighty kilometers from Tehran, on the highway, the car from Fakhrizade was not exploded, and a high-precision loitering ammunition did not fall on it, as often happens with the enemies of the collective West. In fact, the VIP passenger was shot by a remotely controlled robot and then exploded.

It is not known for certain whether the machine-gun turret was actually controlled from a satellite. Or the operator was located at a distance in the car and quietly disappeared after the terrorist attack. The turret with a machine gun was most likely located in the passenger compartment and fired through the rear (or front) glass. There is also a version that automatic small arms were located inside a Nissan truck parked on the side of the highway.

The psychological effect of this attack is also important, revealing the vulnerability of persons important to the country from foreign intelligence services even inside Iran. The enemy spy network within the Islamic Republic is obviously so advanced that it can afford to construct such deadly traps on the roads. Demonstratively inflicted a scalpel blow, minimizing collateral damage from an explosion, for example. After all, the terrorist act took place on a busy highway, and with a powerful explosion there would have been many more deaths.

Another scenario for the development of the situation is circulating in the media space. Eyewitnesses claim that they heard first an explosion, and only then shooting. It was an unknown explosion that forced Fakhrizade's car to stop, and only then a machine gun worked on a fixed target.

At the same time, the scientist received two fatal wounds already outside the car - the bodyguard tried to cover the guarded person with himself, but he was killed. However, this scenario is also one of the versions. It is not clear, in particular, when the car with the machine gun exploded. 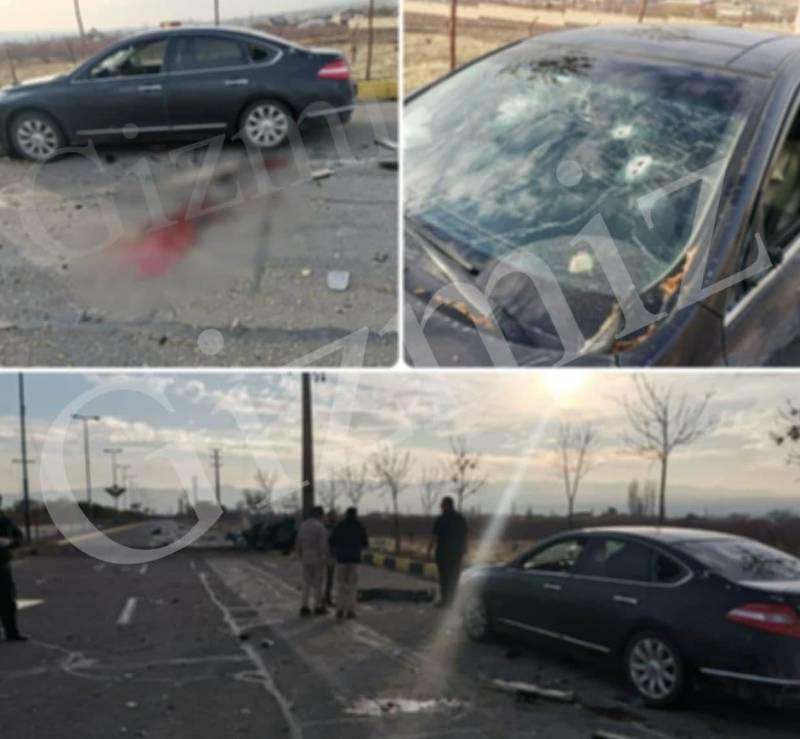 Source: espreso.tv
The initial analysis of the results of the fatal attempt on the scientist suggests that the Iranian special services did not expect an attack at all. Fakhrizade's car was completely civil and was in no way designed to protect important passengers. The scientist had previously been assassinated, but no armored vehicle corresponding to the status of a passenger was found. Just as the nuclear scientist did not have escort vehicles capable of at least covering a defenseless passenger car from a machine-gun burst.

According to one version, the guards were still there, but they moved along the highway several kilometers further. The organizers of the assassination attempt knew all such subtleties and carried out a rather complicated operation to eliminate the father of the Iranian nuclear program. In Tehran, the potential executors and customers of the terrorist act were expressed in the following meaningful way:

"There is evidence of the involvement of the Zionist regime in the operation to eliminate Fakhrizadeh, however, given the complexity of the operation, there is a possibility that other foreign special services also participated in it."

The elimination of Moskhen Fakhrizadeh will not, of course, exert much influence on the Iranian nuclear project of a peaceful or militaristic plan. In the modern world, technological and scientific secrets have long ceased to be concentrated on individuals. Teamwork is a priority now. In an area as complex as nuclear physics, the research team has shared responsibilities among all participants. And often team members can be interchangeable. Therefore, the sacrifice to Fakhrizada was rather demonstrative. An act of retaliation.

But why did the "Zionist regime", in the Iranian opinion, take revenge on the nuclear scientist? First of all, for a key role in the Amad project, aimed at obtaining nuclear warheads for ballistic missiles of the Islamic Republic.

The Iranian analogue of the American "Manhattan Project" was launched in the early 2000s, although the first developments date back to 1989. Israel and its allies regularly launched pre-emptive strikes at the facilities of the nuclear program, but covered it up in Iran back in 2003.

Jerusalem a couple of years ago provided documents that, according to the Israelis, prove the continuation of work on the Amad theme. Tehran denied everything, attributing the development to improving the peaceful atom. IAEA in this stories was on the side of Iran, although it complained about the regular blocking of international observers' access to some of the republic's nuclear facilities.

USA and / or Israel?

It is noteworthy that when the Iranians received the Russian S-300 PMU-2 Favorit complexes after a long wait, they covered the Fordo caves with them in 2016. It would seem, why protect some caves with an expensive air defense system?

It turned out that centrifuges for uranium enrichment were hiding in Fordow for a long time, which in 2012 were disabled by the notorious Stuxnet virus. The technique was quickly restored by Iranian scientists. But the successful cyberattack made it into history and programming textbooks.

The maneuver with the "Favorites", given Iran's declared freeze of its military nuclear program, seemed strange to the West. And the pressure on the country intensified. And Moskhen Fakhrizade has always been at the center of the whole story.

Recently, the deceased scientist headed the Defense Innovation and Research Organization (analogous to the American DARPA) at home, which, due to suspicions of working on a military atom, came under US sanctions. In addition, Fakhrizadeh was an officer in the Islamic Revolutionary Guard Corps, which also did not add confidence from the world nuclear club. All this, coupled with the numerous successful attempts by the Mossad on Iranian nuclear scientists, speaks in favor of the Israeli trace in the murder of the famous scientist. But there is also the USA in the game. 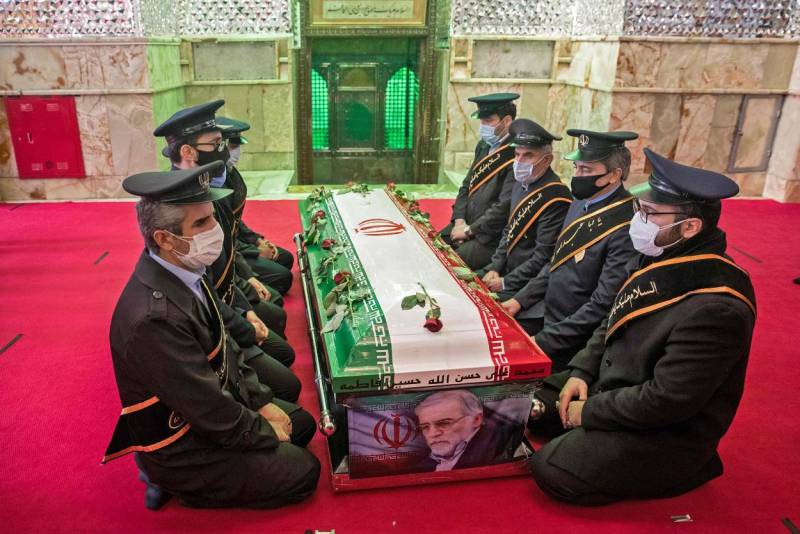 Source: bb.lv
Tehran's main enemy in recent years has been President Donald Trump, who is very radical towards the Islamic Republic. At the same time, the outgoing president sympathized with Israel, in various ways supporting all kinds of Jerusalem aggression against opponents in the region.

Joe Biden, the new president, has a slightly different attitude in this regard. Israel is expecting a cold snap in relations with the United States, while Iran may well count on a symbolic warming.

In this regard, the possible provocation of the Trump administration with the assassination of Fakhrizadeh looks like a logical, albeit somewhat naive step. It got to the point that even in Tehran they voiced such a conspiracy version of a terrorist act among the main ones. And if so, the operation, which was simple in design, but complicated in execution, was actually wasted.

If Iran decides to take retaliatory steps, they will be completely symbolic.

Ctrl Enter
Noticed oshЫbku Highlight text and press. Ctrl + Enter
We are
A great interview with Sergey Lavrov: about Ukraine, Obama and IranWhat you didn't want to know about England
Military Reviewin Yandex News
Military Reviewin Google News
79 comments
Information
Dear reader, to leave comments on the publication, you must sign in.